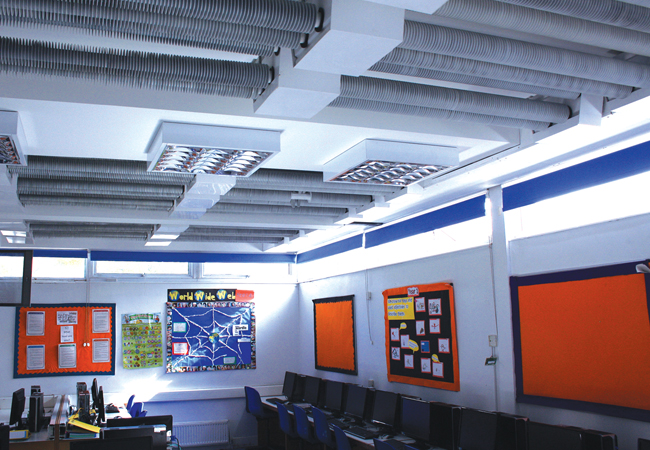 The winner of the Energy Efficient Product or Innovation category at the CIBSE Building Performance Awards demonstrates how investment in research can benefit a commercial business.

NewMass was developed as part of a BuroHappold-sponsored engineering doctorate in environmental technology, completed at Brunel University by Gideon Susman – now strategic energy planning lead for the company’s US west coast region.

It comprises an array of finned tubes that sit below the ceiling of an occupied space. The tubes are filled with a phase change material (PCM) that passively absorbs excess heat from the space by changing from a solid to a liquid.

At night, this absorbed heat is passively discharged to the night air or rejected to a chilled water loop. Depending on ambient dry- or wet-bulb temperatures, the chilled water loop may be able to supply free cooling – otherwise, a chiller can sink the heat. The chiller can also operate on particularly hot days, to boost cooling as required.

Susman says year-round performance is not guaranteed in passive systems because there are often periods when the PCM becomes saturated with heat and can no longer limit temperature rise. Active systems – using tanks to store the PCM instead of locating it in the space – generally don’t save energy, and should only be installed to shift load.

His system, Susman says, combines the best passive and active features. ‘This saves energy by prioritising passive operation for the majority of the time. If the array can absorb excess heat from a space, without any extra input energy, it will do that.

The chilled water loop can pull heat from the PCM and/or the space whenever required.’ The system can also operate in heating mode when supplied with hot water from a boiler or heat pump.

The system is optimised for heat transfer within the body of the PCM and at the surface of each unit, which helps maximise and sustain cooling capacity. PCMs do not have an inherently high conductivity. BuroHappold has increased it by employing Raschig rings – small aluminium cylinders – that allow the system to maintain a higher cooling capacity for a longer period. This, effectively, increases thermal capacity and aids the discharge of accumulated heat.

At the surface, convective and radiative heat transfer is enhanced by using a radiant/absorbent surface and increasing natural convection with an optimised external fin configuration. This enables cooling capacity and heat discharge rates to be maximised. 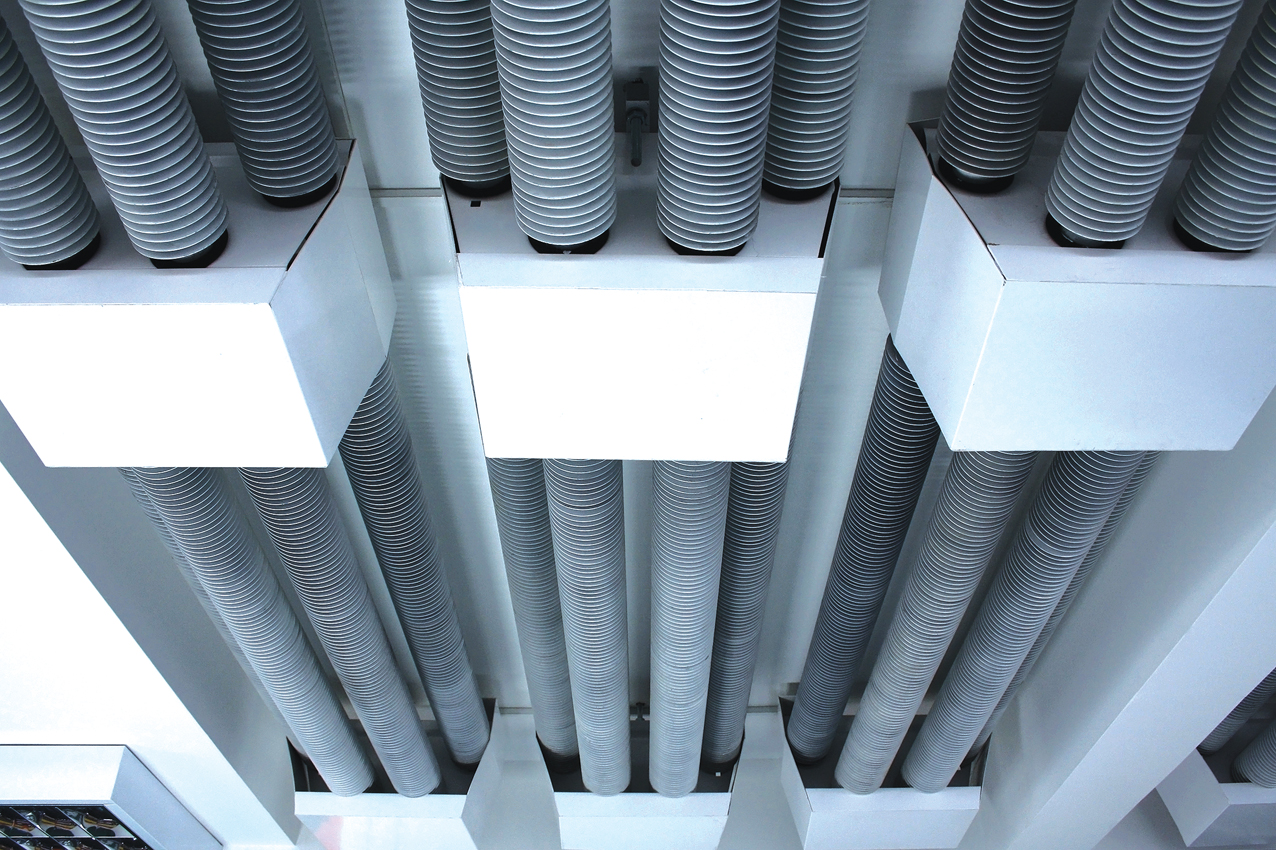 NewMass is installed in banks of four or eight units

The system is installed in banks of four or eight units, held in place by brackets hung from the ceiling slab. Each bank is connected to insulated pipework that can carry chilled and hot water. Balancing valves may be used at each point of connection, but – after commissioning – all control is achieved at the central plant, with no moving parts in the space served.

An algorithm was developed to control all units, based on room air temperature, relative humidity and the state of phase of the PCM. This allows the units to absorb the maximum possible heat passively, before the chilled water loop engages. Passive discharge is prioritised by deferring active discharge until conditioned spaces become occupied.

A prototype design was tested at Brunel and compared against other commercially available, passive PCM products. The tests revealed competitive temperature moderation in passive mode and excellent temperature control during active operation.

BuroHappold partnered with ICE Architects and received funding from the Technology Strategy Board for development and installation of the system in Brentfield Primary School, Brent, London. The system was monitored for a year and tested in various modes of operation, including heating, to understand performance.

Results were used to calibrate an EnergyPlus integrated model of the system and building. This demonstrated 36% energy savings compared with a passive chilled beam system of the same capacity. The researchers also reported comparable, or improved, thermal comfort compared with existing passive systems.

The system performed similarly in terms of passive temperature control and far better than the alternatives in active mode, the team reported. The Brentfield school tests gave valuable calibration data, says Susman. ‘This allows us to model the system in alternative configurations, climates and building typologies – essential for demonstrating its potential in different markets.’

The units, designed to be disassembled and recyclable, are constructed of three main materials – PCM (SP21e, Rubitherm), aluminium and copper – plus fittings and a paint finish. Of these, only the fittings are composites.

A life-cycle assessment will be conducted to refine any processes that could be particularly harmful to the environment. At the end of a unit’s life, the molten PCM can be poured off and returned to the manufacturer for recycling.

Work is continuing to bring the system to market, and papers on the system will be published later this year.

The 2019 CIBSE Building Performance Awards are now open for entries. They recognise the people, products and projects that demonstrate engineering excellence in the built environment, and are the only industry awards that focus on actual, measured performance outcomes, not just design intent.

The 13 award categories are open to any organisation, worldwide, responsible for the design, commissioning, construction, installation and operation of low-energy buildings, as well as manufacturers whose products enable efficient energy consumption.