As the UK moves towards a potential departure from the EU, the rules that have been developed under the EC Ecodesign Directive for energy-related products – which include the most significant technologies that contribute to the environmental control of buildings – are set to live on, and continue to develop for UK users and suppliers.

This article will consider the progression of the directives that have matured into their current form and looks forward to the continued impact of Ecodesign in the UK.

The EU began to develop regulation and legislation in product ecodesign in the 1990s. And now, at the 10th anniversary of the inception of the Ecodesign Directive,1 there is a dynasty of standards in place that has resulted from the consolidating Energy Efficiency Directive 2012/27/EU, setting a framework that aimed to lower the EU’s 2020 final energy consumption by 20% – roughly equivalent to turning off 400 power stations.

The directives that furthered the objectives advanced by the Energy Efficiency Directive, in terms of buildings and building services, are notably:

Broadly, the Ecodesign Directive can be considered as addressing the supply side, while the Energy Labelling Directive focuses on the demand side.

The current Ecodesign Directive entered into force on 20 November 2009 and replaced the previous Ecodesign Directive 2005/32/EC, and in so doing extended its scope from the former ‘energy-using’ products (EuP) to the more encompassing ‘energy-related’ products (ErP), with a view to expanding the number of energy-efficient and environmentally friendly products available in the marketplace. The lifetime environmental impact of a product is practically determined during the design and construction phase, so it is particularly important to consider life-cycle impacts at the earliest stages of a product’s development. So, the directive does not only cover the energy use of products, but also aims to reduce the overall environmental impact. The manufacturer or importer has the responsibility of ensuring that a product conforms to requirements, and then the national market surveillance authorities check the compliance of the products through random tests, which are overseen by the Office for Product Safety and Standards (OPSS) in the UK.

There have been, to date, three progressive Ecodesign workplans that have agreed groups of products (originally referred to as ‘lots’) where a study is undertaken to examine relevant market data and the technological aspects that influence the design, manufacture, operation and disposal of the product. The resulting, freely available, reports provide extensive and detailed information and – although sometimes difficult to track down – provide excellent sources of technical and market information (most are listed at www.eceee.org/ecodesign/). There have been more than 25 product groups that directly impact building services engineering design, procurement and operation. (Some lots have, confusingly, been identically numbered but can be distinguished by the different prefixes that relate to the responsible EC Directorate-General – ‘ENER’ standing for the General Directorate for Energy and ‘ENTR’ for the General Directorate for Internal Market, Industry, Entrepreneurship.)

Following subsequent development and consultation (as more fully described in CIBSE Journal CPD, November 2012), the scope of the lots has been further consolidated, revised or upheld so as to evolve an appropriate set of European standards. Many of the lots have changed from their original concept, so it can be sometimes confusing to relate subsequent EU legislation to the original lots, as they may well have morphed into other areas. However, Figure 1 provides a useful interpretation of the resulting EU instruments that currently relate to active heating and cooling products. 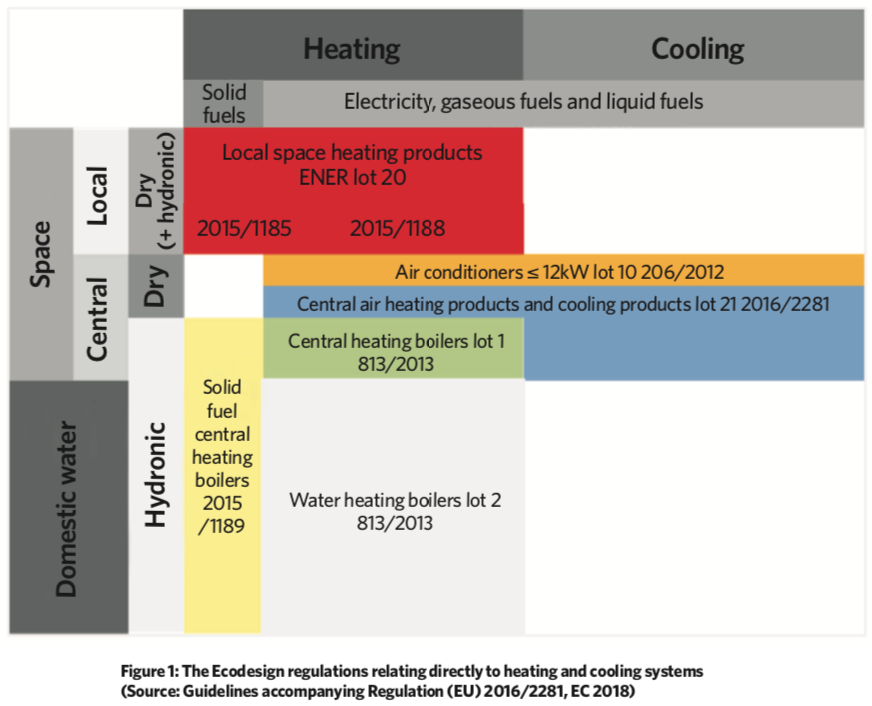 In December 2018, the revised Energy Efficiency Directive (2018/2002/EU) updated some specific provisions and introduced new elements but, principally, it established an EU energy target to improve energy efficiency by at least 32.5% by 2030 (compared with ‘business as usual’). The aim is for the EU to lead the world towards ‘climate neutrality’ by 2050.

The UK is set to leave the European Union on 31 October.5 However, whatever the status of Brexit, the government has declared that there will be no immediate impact on UK or EU consumers with regard to Ecodesign and Energy Labelling standards.6 There is wide-ranging support (in trade associations and professional institutions) that the UK should continue to cooperate with Europe on product standards, both to enable trade and to prevent the country becoming a ‘dumping ground’ for low-quality goods. In the case of a no-deal Brexit, preparations are ‘taking place across government to ensure that, in this case, regulatory continuity will be ensured’,7 with suppliers required to ensure that relevant energy-using products placed in the UK (and the EU) market comply with minimum UK Ecodesign and Energy Labelling standards.8

The UK is a full member of the European Committee for Standardization (CEN) and adopts harmonised standards as national standards (EN is transformed and implemented as BS EN), and leaving the EU will not affect that process. British Standards Institution’s (BSI) membership of the International Organization for Standardization (ISO) and International Electrotechnical Commission (IEC) is unaffected by Brexit, and BSI is currently reviewing the CEN and European Committee for Electrotechnical Standardization (CENELEC) statutes to identify necessary changes and to ensure that BSI can continue its membership of both organisations on a permanent basis.7 The UK’s introduction of regulation will include a new UK Conformity Assessed (UKCA) regulatory mark that will be affixed to products to support the authorities and provide clarity to manufacturers placing products on the market in the UK post-Brexit.7 The concept of ‘harmonised standards’ will be transferred identically into the UK legal order to become ‘designated standards’. This was formally adopted in the UK parliament on 20 March 2019, and will enter into force on the effective date of Brexit in the case of no deal.7

An example of a significant product group that will continue to impact commercial applications in building services started life simply as ‘Lot 21 – Local room heating products’. Through the Ecodesign research, consolidation and development process, this has evolved and matured to create the ‘Ecodesign Regulation 2016/2281/EU9 for air heating products, cooling products, high temperature process chillers and fan coil units’ that relates to building services products that include:10

There is little production of these types of units in the UK (with most being imported from EU or Asia) but, according to current UK government guidance, ‘the manufacturer, authorised representative or importer that first places a regulated product on the EU market (or puts it into service) is responsible for compliance’, and post-Brexit this would relate to the UK market. As commercial equipment, there is no requirement for an Energy Label; however, manufacturers are required to publish, through a free-to-access website, data on the product’s performance, including:

To provide a common baseline across manufacturers, standardised testing and reporting processes are included in the regulation. Standards BS EN 1451111 and BS EN 1482512 define how the normal rating and the seasonal efficiency (see ‘Seasonal efficiency’ box) of a system should be tested, and what calculation method should be used (to provide evidence of conformity with Ecodesign requirements).

So, for example, currently the minimum seasonal energy efficiencies of air-to-air heat pumps are ηs,h = 133% (heating) and ηs,c = 181% (cooling). On 1 January 2021, the requirements move to the second tier (level) of 2016/2281/EU so that the minimum ηs,h = 137% and ηs,c = 189%. Through legislation passed earlier in 2019, the UK government explicitly listed the relatively insignificant contextual changes required to bring 2016/228/EU into a post-Brexit UK, so it is expected that these tier two requirements will be carried across to the UK designated standards.

As illustrated in Figure 2, some manufacturers are already able to supply systems that have seasonal efficiencies beyond the 2021 tier two requirements. The Ecodesign Directive provides a strong technical and economic driver for system development. For example, the system in Figure 2 has been designed with an entirely new compressor that delivers an average 15% increase in seasonal efficiency over previous systems from the manufacturer. When coupled with ducted and cassette systems, the resulting SEER is reported as being around 40% higher and, in heating mode, the SCOP is – on average – approximately 15% higher than previous systems. 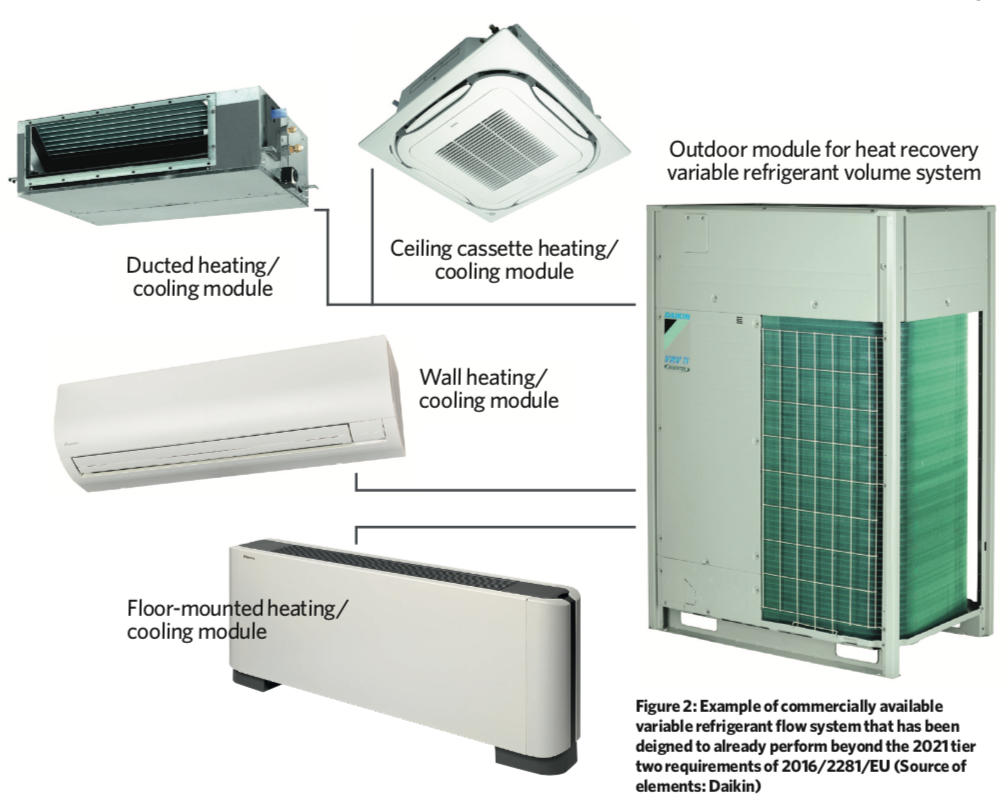 It is important that designers and installers are able to compare the performance of alternative systems and technologies properly, otherwise there may be unrealistic expectations of what a system can deliver for a particular location. So, in the prospective post-Brexit world, it is also important to maintain the free-to-access websites holding the standardised manufacturers’ data.

The consensus process that underpins the Ecodesign regulations has, to some, seemed laboured and lengthy. However, the array of resulting legislation has benefited from the comprehensive investigative and consultative process. The transparency and increased availability of improved data has given designers, installers, operators and owners the opportunity to make a more informed choice about the most appropriate system to use for their project, based on more realistic efficiency information. The challenge is to maintain continuity in a potentially post-Brexit era, to ensure that standards and systems continue to advance both in the UK and across an increasingly global marketplace.

´Seasonal efficiency’ attempts to measure the true energy efficiency of heating and cooling devices using climate ]oned, binned weather data. So, the seasonalheating coefficient of performance SC23 and seasonal cooling energy efficiency ratio SEER are evaluated by manufacturers using operating conditions that are representative of the binned weather data, which provides a common base for year-round performance and does not simply use the efficiency at the rated output.

So, for example, a coefficient of performance (COP) value for each of the bins is found, and together these form the basis for calculating the average C23, the SC23. )or the purposes of checking compliance with the regulations, the following parameters are then calculated in accordance with BS EN 14825:2018:

where CC is primary energy conversion factor (set as 2.5– an interpretation of the average power generator to end-user primary energy transmission efficiency as 40%) ΣF(i) for air systems is simply taken as 3% to represent control inefficiency.