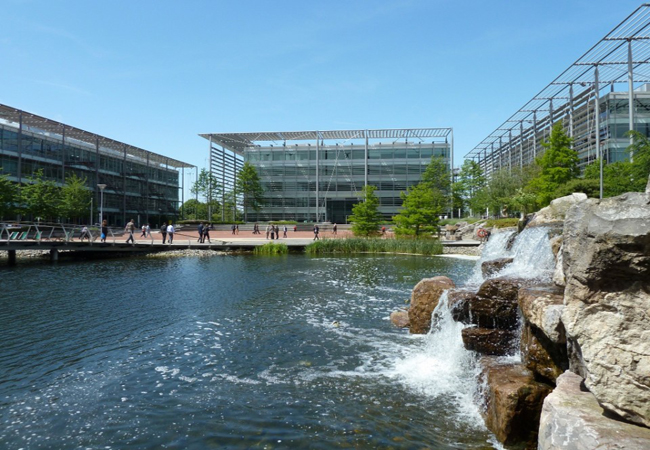 A 12-storey office building at Chiswick Park has been upgraded with 1,060 energy efficiency valves that manufacturer Frese claims will cut the energy consumed by a circulating pump by up to 50%.

It also says the Optima Compact pressure independent control valves used in the heating and ventilating system in the 33,400 m2 Building 7 will also lead to a major reduction in energy bills, as they also make boilers and chillers run more effectively.

The valve assemblies were factory prefabricated to save installers having to connect valves with fan coil units onsite in limited spaces within ceilings. The valves were connected using solder union couplings, and the systems were tested and commissioned in the factory.

What are the benefits of the valves regarding valve authority and turndown of PICVs?

At an authority of, for example, 0.2 the turndown ratio would be half the rangeability as the ability for the valve to control over the range is severely affected at low authorities.

What is valve authority?

Valve authority is an indicator of how much influence a valve has over the flow rate in the controlled system. So, if a traditional valve was excessively large for the application, there would not be a significant change in the flow rate (as the valve starts to close) and it is said to have a low authority. In pressure terms, the greater the relative pressure drop across the device when fully open (compared to the influenced system), the greater the influence of the device on the flow rate through
the system.

For a valve under test conditions (where the pressure drop across the valve is kept constant) the ratio of the maximum controllable flow to the minimum flow is known as the ‘rangeability’. So, for example, rangeability of 25 indicates a valve that will be able to maintain stable control down to 4% of its maximum flow. When a valve is installed in a real system, the ratio of actual design flowrate to the minimum real controllable flow is known as ‘turndown’. The higher the valve authority, the greater the turndown. However, high authorities in traditional valves will mean that the valve will consume more pump power.

Where there are significant fluctuations in system pressure traditional 2-port control valves are more likely to require high values of rangeability (and so turndown) if reasonable control is required at low flowrates.

What is the life energy use compared to using 3-port diverting applications or 2-port?

Studies have shown that systems with 2-port throttling PICV rather than 3-port diverting control valves can reduce pump energy consumption
by 65%.

Furthermore, 3-port diverting applications reduce the overall
system temperature drop at part load (by allowing some water to return directly). This is likely to reduce the efficiency of central plant such as boilers and chillers.

Case studies by Frese and others indicate the potential energy savings in central plant energy consumption (for example, gas to boilers) can be double the pump energy saving.

What are the comparative lifecycle costs?

This is because the spring and diaphragm in a PICV absorbs fluctuations in pipe pressure immediately. Consequently the actuator does not move the PICV in response to pressure changes as there is no temperature fluctuation.

As PICVs replace three separate components (for example, 2-port control valves, regulating and differential pressure controllers) the number of valves in the system reduces more than 50%.

Life expectancy of actuators are longer due to the reduction in reversals and accumulated travel over time when fitted on a PICV rather than a conventional 2-port control valve.

Do they need more care with filtering/strainers?

We concur with BSRIA that strainers fitted on branches are generally adequate for both PICVs and 2-port control valves.

The smaller orificed of the 2-port control valves and PICVs can have narrow flow paths and local strainers can provide further protection particularly on expanded systems or those with known water quality issues.

We do not believe PICVs require more care with filtering/strainers however there is a benefit to choosing a PICV where the internals can be removed and cleaned in place (as is the case with the installation at Chiswick Park) as PICVs are generally more costly to replace than a similar sized conventional 2-port control valve.

Is there any affect on the controlled variable (for example, off coil air temperature)?

Off coil air temperature is generally much more stable when controlled by a PICV as the valve is modulated to stabilise flow rate as pressure in the pipework fluctuates.

Consequently the control loop temperature does not see any change due to changes in water flow rate.

At a case study carried at 1 Canada Square it was shown that deviation around set point temperature of a chilled water AHU was 60% less when fitted with a PICV rather than a conventional 2-port control valve (See figure 1). 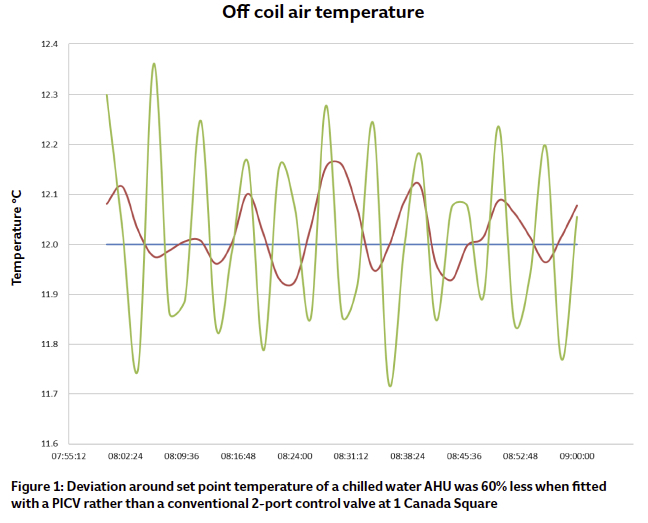 Where should flow/pressure sensors
be located?

Pump sensors should be placed as far from the pump as possible to maximise pump turndown at part load.

If it is expected that the index circuit will change location during the normal operation of the building then multiple sensors and sensor polling should be considered.