There continues to be plenty of talk about collaborating, but not enough actually happening in supply chains and between professional institutions and trade bodies, according to the presidents of CIBSE, B&ES and RIBA. 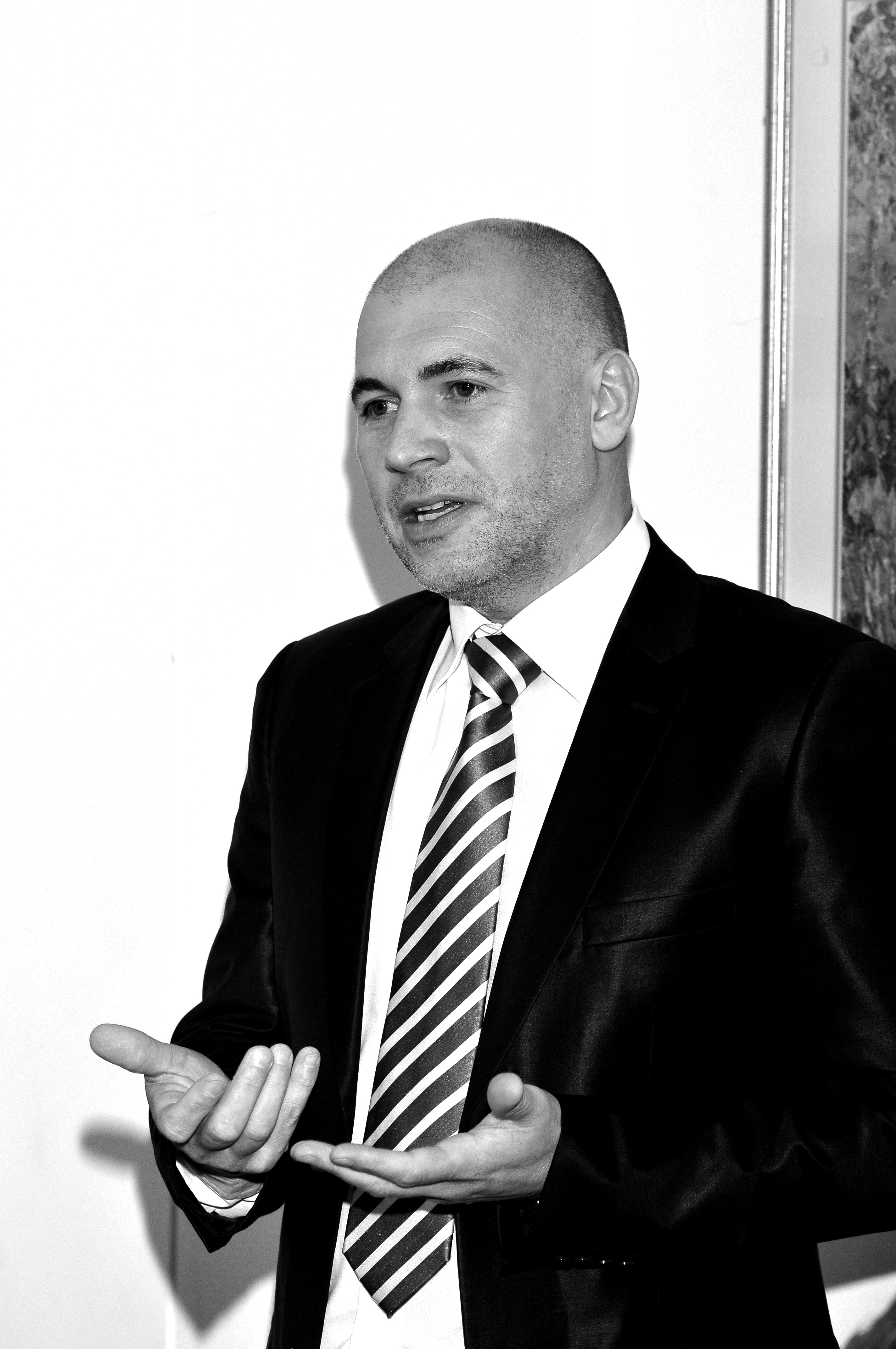 Andy Sneyd: ‘We need to have a way of representing the wider industry’

These three industry leaders came together to tackle the obstacles to cross-industry collaboration during the first CIBSE Patrons’ Presidential Debate at Westminster Central Hall in May.

Nick Mead (CIBSE), Andy Sneyd (B&ES) and Stephen Hodder (RIBA) all agreed that it was time for the talking to be translated into practical outcomes, with Sneyd calling on the professional bodies to develop ‘a common interface… to get this collaboration going’. 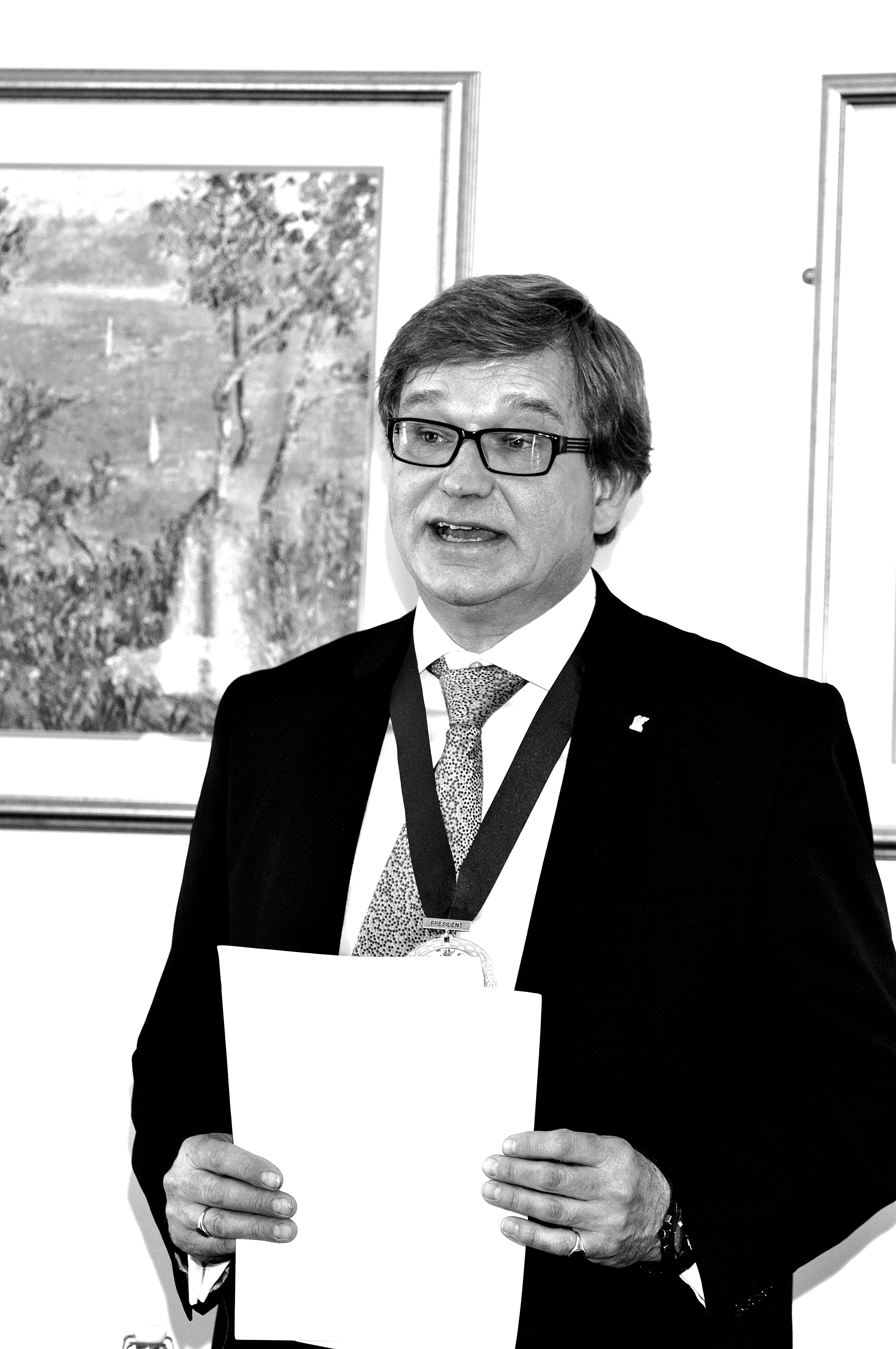 Nick Mead: ‘We cannot continue to separate design and construction from operation’

‘The fact we are thinking about this is a positive step – eventually we will do the doing – but we need to have a way of representing the wider industry,’ he added. He pointed out that 35 to 40% of the value of new build is in the services ‘and even more in refurbishment projects’, but ‘we don’t have a voice’.

‘There are 27 different bodies in building services so we need to be much more strategic and more focused,’ added Sneyd, who is also a Fellow of CIBSE. ‘Wider collaboration with bodies like RIBA is vital. We need to do more networking with architects and elevate what we do.’ 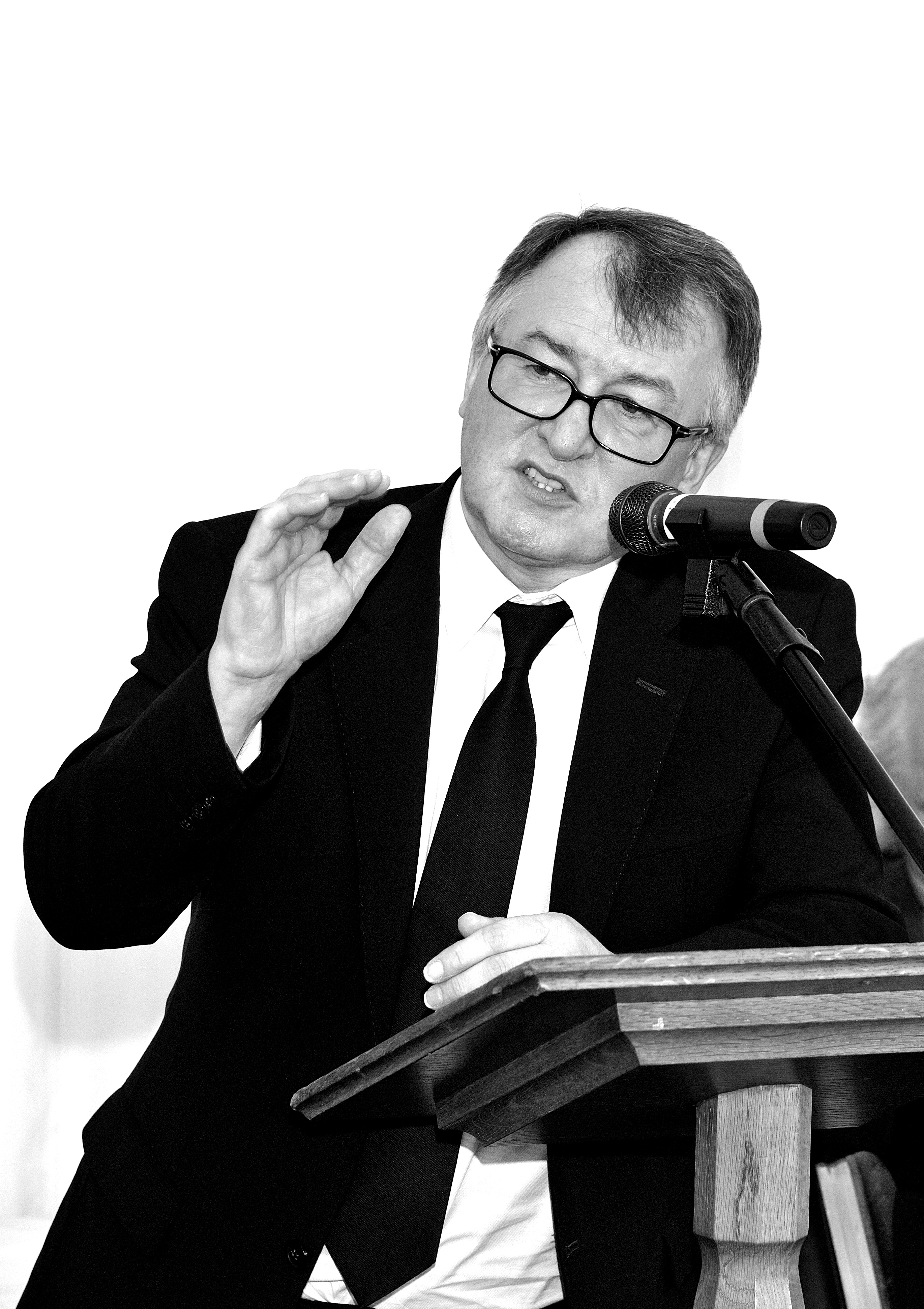 Stephen Hodder: ‘We are in a much more complex industry now’

Hodder said there was very little collaboration between industry bodies. ‘We rarely come together and emulate what we see in practice.’ He said the organisations could learn from collaborative projects ‘in the field’ where good examples were being set.

However Hodder, who became the first RIBA president to address a CIBSE Conference last year – famously telling delegates that ‘we don’t even collaborate about collaboration’ – believes there is still plenty of confusion about the definition of the term.

‘It is much more than simply exchanging knowledge,’ he said. ‘It is the whole culture that has to change – and that is not recognised by enough people.’

The root of the problem of disjointed supply chains can be traced back to the education process, according to Hodder, who pinpointed the fact that architects are still trained in a system that has not changed since 1958. RIBA is now looking at this area, partly in a bid to address the growing problem of student debt, but also to deliver a closer link between academia and practice.

‘We are in a much more complex industry now,’ said Hodder. ‘They need to instil the understanding that it takes many, many people to deliver a project. They need to embrace multi-disciplinary design before they specialise.’

Sneyd said young people don’t naturally put themselves in ‘silos’ when they leave further education. ‘We do that to them; and we didn’t 25 years ago.’ He suggested a root and branch review was needed into how people are recruited into the sector. ‘Perhaps we should look to attract them later in their 20s once they have had some life experience,’ he said.

‘We have real resource challenges to deliver projects – the traditional apprentice skills we learned are no longer relevant,’ he added. ‘We do not want to deskill, we want to reskill with a multi-disciplined workforce.’

He also urged the industry to start telling universities and colleges about the skills wanted and needed.

The CIBSE Patrons work placement initiative was described as a model for improving understanding between the professions. ‘By placing our people with different employers, they can learn about what other members of the supply chain are doing,’ said Patrons chair David Fitzpatrick. 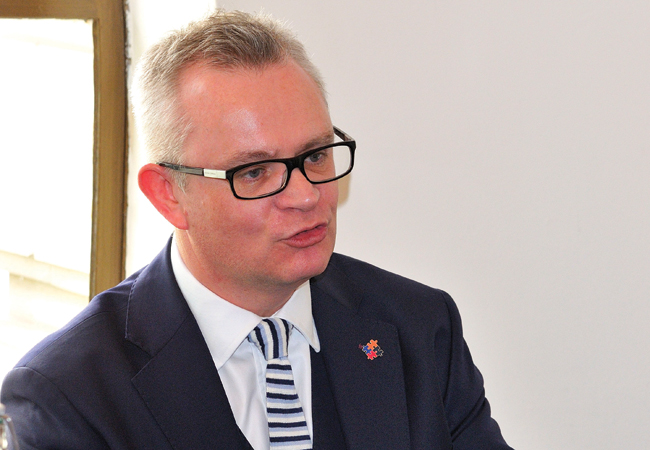 Mead, a former Patrons chair, has made collaboration the central plank of his presidential year and believes it is essential to achieve ‘energy reduction in the built environment’. He added it was not possible for CIBSE members to deliver better building performance on their own.

‘We need to work with others… and the building needs to work as a complete system not a collection of products,’ he said, adding that high performance equipment was often used in a way that does not allow it to fulfil its potential for energy and carbon saving.

‘Designing for one day [in the year] and then adding margins on margins to protect our PI insurance is not an approach for lifetime operation. Systems work better when they are pushed and are, therefore, more efficient,’ he said.

He also called for more collaboration with facilities managers, who are now ‘a far cry from the janitors of old’ in order to improve lifetime performance of buildings.

‘We cannot continue to separate design and construction from operation. Many services are installed in spaces that are impractical for maintenance purposes. Box ticking exercises distract us from real-life building operational issues,’ said Mead, who added that reforming supply chain culture should be led by the institutions ‘not by individual companies’.

Sneyd warned that a failure to collaborate would leave the industry short of the government’s goals for cutting costs in the construction process, and open to the threat of others coming in ‘to fill our space’. He believes the way constructors are starting to use technology on site will prove crucial.

‘The role of the contractor is unrecognisable from 10 years ago, but one thing that hasn’t changed is that we are still criticised for being inefficient – that’s hurtful. We have a huge supply chain with lots of expertise, which is undervalued.

‘Part of the problem is that we are a hugely diverse sector. Small contractors have very different needs from their larger counterparts. For a small contractor it is often about payment and being a respected member of the supply chain. So, when we talk about collaboration we need to think about who we are collaborating with.’

Hodder pointed out that 75% of architectural practices were also very small businesses – employing fewer than 10 people – and it was likely that most of those would continue to work in ‘broadly traditional ways’ and on local projects.

‘It is really only in the larger, more complex projects that we are seeing change and a pressing need for better collaboration and co-ordination,’ he said.

Currently BIM stands for ‘Big and Impossible to Manage’, he said, ‘but we can make things work
– Andy Sneyd

The role of the main contractor was raised by CIBSE Patrons chair David Fitzpatrick, who said that, as a manufacturer, he saw an increase in the number of engineers and architects getting involved in product design, but questioned whether we are ‘missing the main contractors to make sure we get these things built properly?’.

‘The problems of silo culture and the role of the client are huge, but the main contractor has to deliver,’ agreed Hodder. He explained his practice had worked on a major project that was delivered on time and on budget only because there was a good level of collaboration with the main contractor leading to ‘80% cost certainty before we started’.

Sneyd added that contractors were trying to deliver new approaches, ‘but in the end it all comes back to how the client wants to procure and how much risk they are prepared to take’.

The role of Building Information Modelling (BIM) was raised by Mead, but he warned that it was only the answer ‘on paper’ as people were coming up with their own interpretations and ‘doing their own thing’, which hindered collaboration.

‘It’s like herding cats at the moment. We need to stop saying it’s too difficult, choose a platform and then set standards,’ he said.

Hodder urged the institutions to support the BIM Toolkit, which he described as ‘a great piece of work’. ‘The I is the critical bit – it’s about information,’ he added, urging the professional bodies to produce guidance for users. 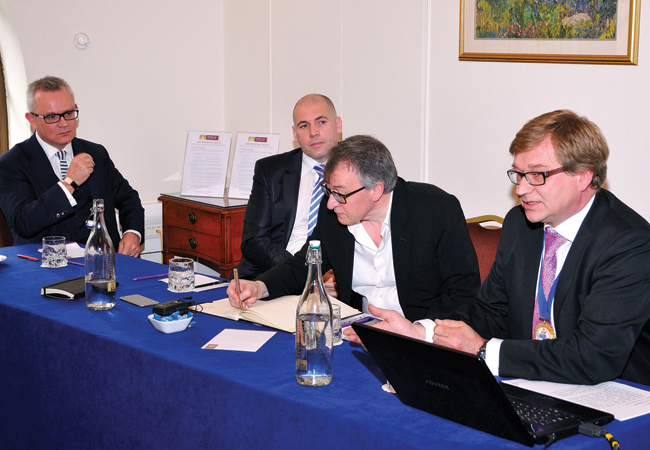 The presidents discuss how collaboration could benefit all

However, Sneyd said BIM would not be a collaborative tool until the software vendors started to produce the formats the industry wants. Currently BIM stands for ‘Big and Impossible to Manage’, he said, ‘but we can make things work. That is what we as engineers do. Technology is the tool for proving that what we build meets the specification and that can be linked to the BIM model.’

However, the presidents all agreed the elephant in the room was money. Tight margins meant suppliers were looking to find ways of squeezing more financial reward from each project – and this leads to design variations and increases the potential for disputes – while late payment practices erode trust.

‘So we need to go back to the client and present them with a better way of working that would improve profit and deliver better projects,’ said Mead.  ‘Often we create a cost model and then the client says he can’t afford it, so we beat the hell out of each other and the big loser is the client because he doesn’t get what he wants.’

He explained the process of ‘cost management’ was at fault and ‘the client leads this – there’s no point blaming each other’.

‘As individuals we will not win this; we need to support the institutions and drive collaboration, but there is a perception problem,’ concluded Mead.

‘We always highlight the bad buildings, but there are some brilliant ones out there and we need to shout about what we do well – that’s a role for the professional bodies.

‘We must lead by example.’