The 2015 ASHRAE Energy Modelling Conference featured the launch of a new competition aimed at highlighting best practice in building modelling.

Eight project teams, led by rival software vendors, competed in the ASHRAE LowDown Showdown to model an exemplar net zero energy (NZE) – or below – building. The competition, sponsored by the US Department of Energy (US-DOE) and the National Renewable Energy Laboratory (NREL), aimed to explore how BIM and energy-modelling tools could assist in the early design stages.

Delegates signed up to play a position on a team – such as mechanical engineer, architect, designer and energy modeller – and teams were given three months to model entries based on a common set of requirements. These included storey height, building use, minimum window-to-wall ratio, IT loads and number of occupants.

The awards were for energy-use results, innovative workflow, team work, and most creative – and were given out at the conference after the teams’ presentations. 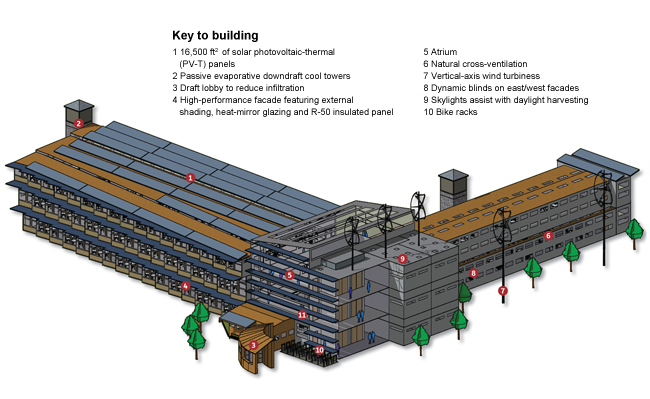 A simulation of the three-storey office building in Boulder, Colorado

The best energy use prize was won by a team led by IES, using IESVE 2015 modelling software and a suite of other simulation tools. The team collaborated via bi-weekly web meetings and used the cloud to make updates to the model.

Our brief was to design a three-storey, 53,600ft2 office building that included details of the annual energy use, and a breakdown of energy by HVAC, lighting, plug loads, and service water heating, located anywhere in the US. To increase the challenge, the team chose to locate the building in central Boulder, Colorado, where there are extreme variations in climate, including annual external conditions ranging from -20°C to 34°C, 6% to 100% relative humidity, and commonly occurring day-to-night-time temperature swings of 19°C. 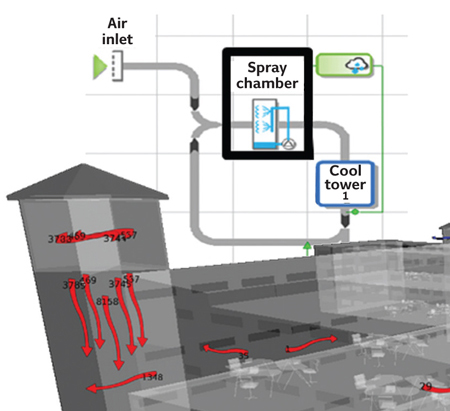 The spray chamber cools air in the cool tower

We wanted to ensure that the design would not only meet net zero standards in 2016, but also in 50 years’ time. We used Arup’s WeatherShift, which makes future temperature, humidity, rainfall, and so on, in conjunction with the local TMY15 weather file – showing the past 15 years of data – to make predictions about Boulder’s weather from 2050-2064.

The future data revealed higher temperatures, which we were able to account for in the model – in part by incorporating two passive downdraught cool towers (not cooling towers) into the design. These use evaporative cooling to bring the ambient hot and dry air (37°C/6% RH) to a comfortable supply condition. A spray chamber helps to cool the incoming air. One interesting benefit of the evaporative cooling is that the air naturally begins to move downwards. With the atrium being negatively pressurised, we were able to induce the cool air into the office spaces without any fans. 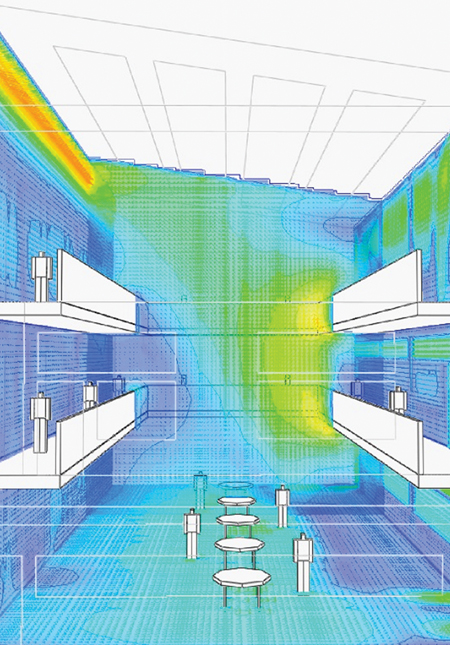 The atrium design was critical to the NZE project. It funnelled external air towards the wind turbines for added renewable energy generation, and its south façade was shaded externally with photovoltaic-thermal (PV-T) panels. These combine the functionality of solar thermal collectors and PVs in one panel.

Negative air pressure in the atrium was necessary to achieve adaptive thermal comfort conditions in the office spaces. The atrium was heated with a radiant floor and the hot water for this was pre-heated from the PV-T panels. Additional heating was met by a high-efficiency condensing boiler.

To understand user behaviour, we monitored hourly plug loads in an existing office building occupied by ZNE building evangelists Integral Group. The IES team used a tool called Ergon to turn actual recorded data into energy-simulation input data. This was then fed into the energy model so we could fine-tune the energy prediction. Using actual data allowed us to consider occupier behaviour, and took into account any oversizing of plant.

The US-DOE praised our innovative atrium and was also impressed with the use of future weather data, saying: ‘The team projected their design 50 years into a presumably warmer future and planned for the addition of ventilation towers that would keep the building operating at zero net energy.’