https://hoarelea.com/Building managers are in danger of being overwhelmed by data. Information from the BMS and increasingly sophisticated HVAC systems are creating ‘a huge amount of dark data, which is collected but never sees the light of day’, according to Hoare Lea partner Andrew Bullmore.

The problem is the sources of the different sets of data are often unconnected and also not presented in a way that can be easily understood by the building user, says Bullmore. ‘Building innovation has been driven by technology companies. What should be driving organisations is how new technology can support user-centric design and operation.’

Bullmore believes data can transform building performance if it is used in a meaningful way. ‘It should allow you to optimise the operation of the building and to inform design better,’ he says. ‘It’s not just about minimising the construction cost of a hospital, for example – it’s about how you can make that hospital so it gets people better.’

Optimising data for the benefit of building users is central to the concept of Hoare Lea’s Living Lab project. Its goal is to use the firm’s offices to ‘explore, demonstrate and integrate emerging technologies and techniques, and learn how these will help to design future-proofed and human-centric buildings.’

‘The Living Lab is about the interaction between buildings and people, and how they influence each other,’ says Bullmore. To explore this, Hoare Lea has aggregated data from live building systems in its London office, and layered it with occupancy and environmental data collected by Awair sensors. The metrics recorded are chemicals (TVOCs), fine dust (PM2.5), temperature, humidity and CO2. The sensors also have the capability to measure ambient light and ambient noise, which will be enabled at a later stage. These are presented on a user-friendly dashboard that can be accessed by employees via an app.

The Living Lab’s starting point was to make the data commonly accessible. Working together with their controls supplier they gained access to the BMS data and created a central platform on which all other data could be aggregated. ‘It was not easy,’ says Bullmore. ‘There are a huge number of sub-systems that don’t talk to each other. We had to create application programming interfaces to pull a lot of data from the cloud.’

With data in a common format, correlations between sets of data could be identified. For instance, they could compare HVAC with lighting and where people were in the office. Partner Ashley Bateson offers two examples of control issues uncovered in the firm’s London office by comparing datasets.

‘From our occupancy profiles and plant operation, we can see that default control strategies aren’t necessarily set for delivering comfort in the most efficient way. We have learnt to modify the HVAC settings to take advantage of passive night cooling,’ he says.

The cause of a stuffy meeting room was also identified when passive infrared (PIR) data was analysed and compared to the operation of ventilation in the meeting rooms. It transpired that the PIR sensors had been wired to the adjoining rooms, so ventilation was only triggered by the PIR sensor being activated in the neighbouring room.

Bateson is open about the issues uncovered at Hoare Lea’s office at Western Transit Shed in King’s Cross, London. He is keen the building declares its D-rated display energy certificate (DEC) alongside its B-rated energy performance certificate, even though it is not mandatory to display DECs in commercial buildings. ‘It’s important that we share information,’ he says. ‘It’s clear from the independent review on safety standards and building regulations by Dame Judith Hackitt that there are endemic issues with the delivery of buildings within the construction industry. Companies need to be open, and learn from each other to improve performance.’

Bateson believes visualisation of data is critical if it is to be understood by those managing buildings. ‘Once it’s visualised, it’s not just a massive dump of data in a spreadsheet that only analysts would get to grip with,’ he says. As well as apps showing real-time environmental readings, Hoare Lea is also creating a digital twin of its London office, based on data from the BIM model and live information from sensors.

Bullmore says there are four ingredients to successful optimisation using data: clear target outcomes; access to evidence relating to outcomes; a feedback loop; and the ability to take actions to close the gap between design and operation. To understand the behavioural response to the building, Hoare Lea is surveying staff to see if their responses correlate with environmental conditions, such as temperature, air quality, daylight and even desks next to plants. When the chiller failed in its King’s Cross office in the summer, Bateson looked at the data to see if there was a link between high temperatures and productivity (see panel, ‘Comfort cost’).

The company has several clients targeting and measuring outcomes, including developer CEG at Number One, Kirkstall Forge, a seven-storey office building in Leeds. ‘CEG is really interested in comfort and air quality outcomes,’ says Bateson. ‘We hope to identify factors in procurement or management that have been successful, or where improvements can be made.’ The firm wrote the employer’s requirements for the design and build project, and recommended using a clerk of works to check systems were installed and commissioned properly. ‘CEG said they would always use a clerk of works now,’ says Bateson. ‘It means they will have a lot fewer performance gaps.’

Bateson predicts that more developers will ask for an integrated evaluation of performance that will include health as well as energy parameters. The Living Labs will help engineers understand the requirements of the occupants, he adds. ‘There is a need to understand how people feel in buildings.’

In the London office, Hoare Lea has been using BUS and its own bespoke satisfaction occupant surveys to gauge whether staff have been satisfied with the design and comfort of the building. They were asked in the summer, just after the chiller system failed when internal temperatures exceeded 28°C.

Not surprisingly, respondents found the conditions temporarily uncomfortable, rating the summer comfort lower than previous years. The landlord’s chiller plant was repaired shortly after, demonstrating the importance of a resilient comfort strategy. Overall, satisfaction for the building over the year was rated in the top 70th percentile, benchmarked against a large sample of offices.

Bateson estimated the cost in lost productivity as a result of the chiller breakdown was probably between £10,000 and £20,000. This estimate is based on research1 that shows there can be a 4-7% loss in productivity at 28OC compared to 21-23OC. 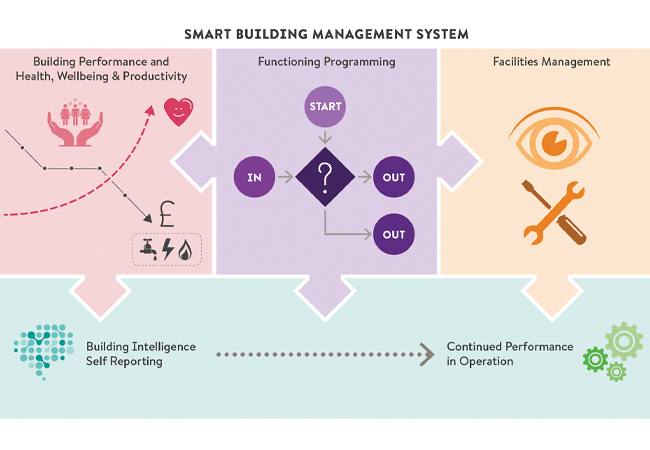