To help limit global warming, improvements to the efficiency of cooling systems must be made alongside the transition to low global warming potential (GWP) refrigerants. This is the warning from the International Panel on Climate Change (IPCC), which published findings last month from the first part of the research that will make up its Sixth Assessment Report.

Aiming to meet this challenge is Dublin-based company Exergyn, which is developing a zero-GWP alternative to traditional vapour compression refrigeration.

Currently undergoing trials, the shape memory alloy (SMA) technology is a solid-state alternative refrigeration system, where alloys are compressed to release heat and then the cycle is reversed for cooling.

According to its developer and the company’s managing director, Dr Kevin O’Toole, the technology is retrofittable, and doesn’t employ traditional refrigerants with their risks, such as flammability.

O’Toole says low-volume production could start in three years and predicts it will revolutionise the cooling industry.

The system – which O’Toole refers to as a solid-state heat pump – is based around an alloy core, comprising stacks of SMA ‘plates’ that are, typically, a compound of nickel and titanium, and a hydraulic piston provides the compression. As the stacks are compressed, the heat transfer fluid – in this case, water-glycol – passes through little channels within the material, heating or cooling during load release.

O’Toole says nickel titanium has a couple of unique effects – a shape-memory effect and a pseudoelastic (superelastic) effect. ‘Put simply, it means the material has two distinct phases – called austenite and martensite – almost like two materials in one,’ he says.

When an external force is applied to the material, it changes its phase from austenite to martensite, releasing a large amount of heat. ‘It’s similar to a refrigerant gas going from a liquid to gas phase but, in this case, it’s solid to solid. As we take the load off it, it absorbs that heat back into itself,’ says O’Toole, a mechanical engineer by trade, with a PhD in SMA applications.

Each 10-15-second cycle has four stages that involve: compressing the material and releasing the heat; pre-cooling; taking the load off and absorbing the heat to get free cooling; and then pre-heating. ‘The four stages happen every 90 degrees of a cycle, and we typically have four or eight cylinders – or stacks – of this material operating over a cycle, so we have a constant heating capability on one side and a constant cooling capability on the other,’ says O’Toole. 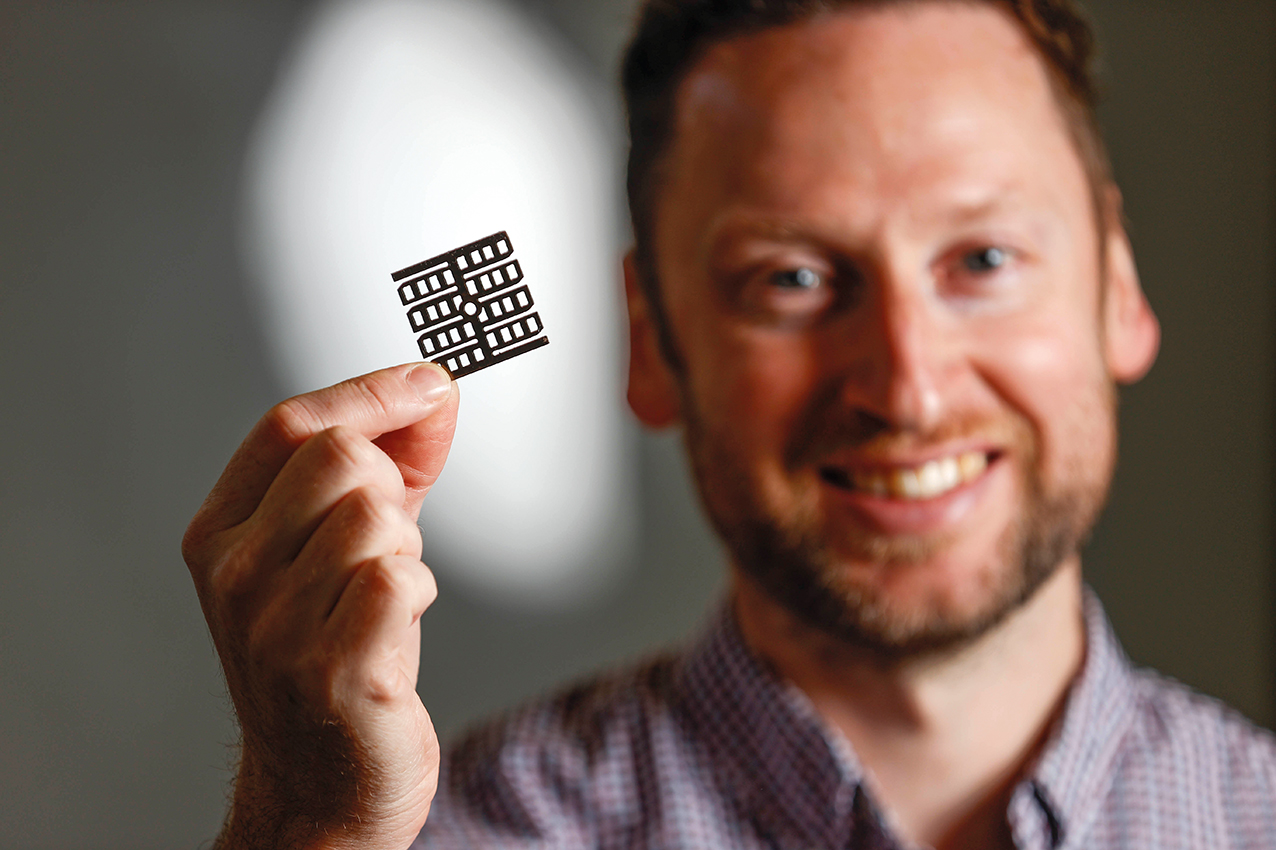 The alloy core comprises stacks of SMA ‘plates’ that are, typically, nickel and titanium

He says the nickel-titanium ratio determines the activation temperatures at which the SMA changes phase. The HVAC application, for example, can produce cooling or heating in a window between -25oC and 70oC. But this can be altered with adjustments to the alloy and by adding trace amounts of several other elements such as copper, cobalt, chromium or vanadium. ‘In a lot of ways, the SMA world is like an untapped reservoir,’ he says.

Exergyn’s HVAC prototype unit has a 60kW capacity but, because of its modular nature – the alloy stacks and balance of plant can be retrofitted into where the typical vapour compression loop would be in an HVAC system – O’Toole says it can be scaled up to large-scale applications without loss of performance.

Compressing the material – rather than subjecting it to tension – has allowed the team to run 70 million cycles, which is equivalent to 40 years of operation in a heat pump.

One of the technology’s benefits is that there is a high commonality of components between systems, says O’Toole. ‘The interchangeability of stacks means that, if I wanted to make a refrigeration or district heating system, I can take out the stack optimised for refrigeration and put in the heating stack.

‘Of course, in refrigeration, we’ll be running a slightly different heat transfer fluid, so it’s not as simple as just slotting things around. But the principle is that we can design something that looks very similar across the board,’ says O’Toole. 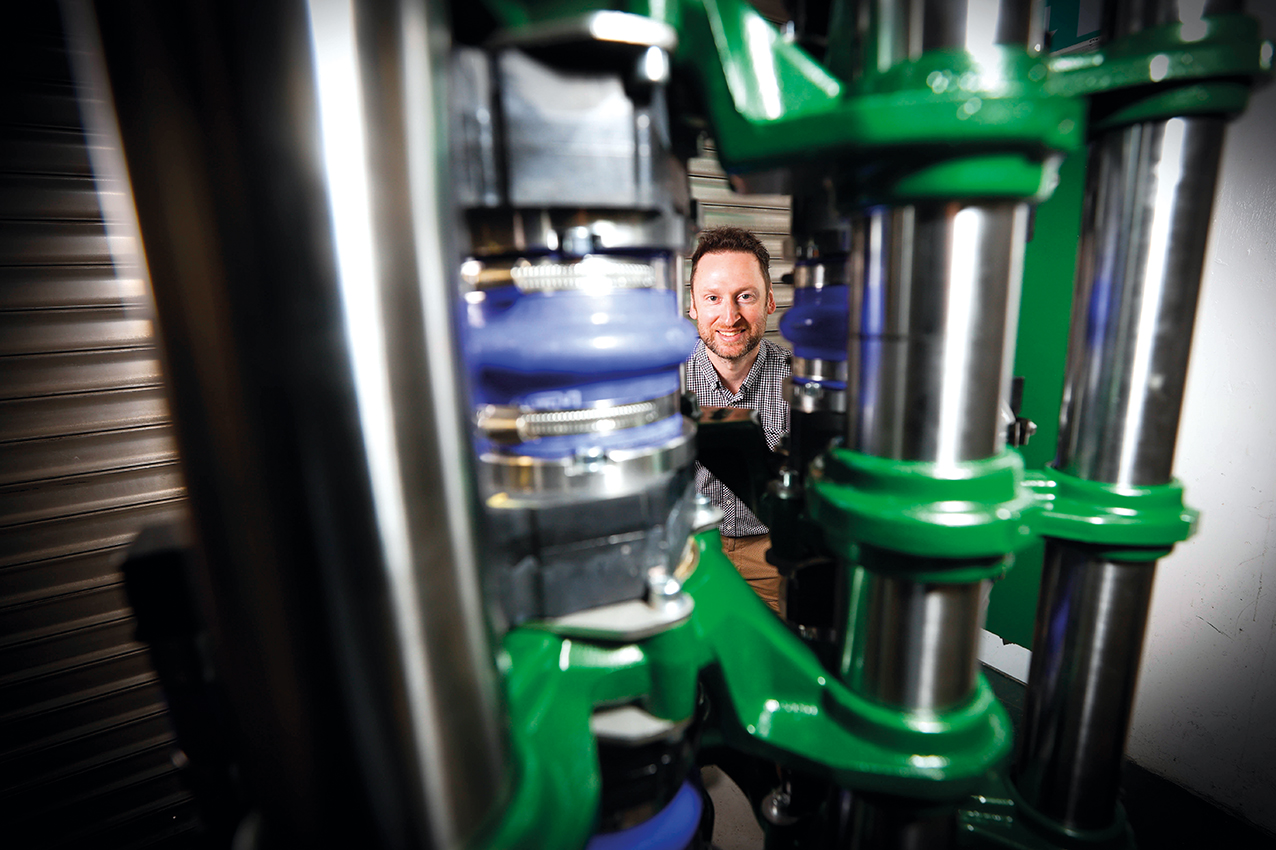 A moving core – rather than a stationary heat exchanger – avoids scaling

Because the SMAs are not for medical purposes such as braces and prosthetics – which is the technology’s origins (see panel ‘Origins’) – low-grade materials can be used, says O’Toole. ‘And it doesn’t matter if there are some surface nicks or inconsistent finishes because we’re not inducing a crack on the material, so it’s not going to fail,’ he says.

A moving core – rather than a stationary heat exchanger – avoids scaling, and any build-up is ‘blown off’ as the core moves and expands and contracts, says O’Toole. ‘Because they’re non-reactive you could, in theory, put an additive into the fluids and flush it out as part of regular maintenance. We haven’t run our systems for five or 10 years in non-accelerated mode yet but, to date, we haven’t noticed any scaling because performance stays the same,’ he says.

The perfect blend of the alloy core is a constant work in progress. As well as its Dublin-based large-scale test facility, Exergyn has a research laboratory in Prague, Czech Republic, where Dr Jan Pilch is tasked with researching the most effective element blends, stabilising them and making them operate at high performance for millions of cycles.

Without this, O’Toole warns the performance starts to drop off after around 40,000 cycles, as gradual degradation destabilises the material into something commercially unviable. ‘With the process we’ve developed – between Jan’s work on the microstructure, and our work on the heat transfer and operation – we can maintain less than 10-12% loss over millions of cycles. It’s improving all the time; we have a conveyor belt with new blends coming online roughly every six months, and we’re hoping to bring the developmental process in-house in the next few months,’ says O’Toole.

‘If we come up with a new blend, because of our commonality of components and modular core, we can swap in a new stack and get the benefit,’ he says. ‘So, if the stack is more efficient – which can come through moving more heat around, or a reduction in the amount of load needed to apply to the material – you can swap in that core and start compressing it in the same sequence.’

Their latest iteration of the nickel titanium blend has a material coefficient of performance (COPmat) of 27-30, says O’Toole. ‘It’s what we do on the microstructure combined with the chemical blend that gives us constant improvements.’

SMA technology has its origins in biomedicine – SMAs have been used for decades for dental braces and heart stents.

O’Toole says: ‘SMAs have been around since the 1960s and, in the 1990s, the first outlet for SMA was biomedicine, with a significant proportion of an already small community going into research because that’s where the money was.’

‘In 2017, because of the momentum behind project phasedown [of high-GWP refrigerants], we looked at it in reverse. This was the turning point in the company. But all the work we did in the preceding years laid the foundation for us being able to do that.’

In the future, more gains will be made with improved material, says O’Toole. ‘If you’re moving more heat around with less energy in, you use less material, which is a direct saving on the amount of SMA that goes in. SMA makes up 30% of production costs of the system so, the less you use, the better, which comes down to more efficient materials.’

Other parameters – such as the heat transfer fluid used and how fast the cycle is operating – can also be tweaked to get further performance improvements and cost reductions, says O’Toole.

‘Moving the current 10-second cycle to a six- or eig ht-second cycle will also have a direct proportional change on the amount of metal in the system because, if you use smaller cores, everything comes down proportionally, bar the controls system,’ he says.

Compressing the material – rather than subjecting it to tension – has allowed the team to run 70 million cycles, which is equivalent to 40 years of operation in a heat pump

To ensure the performance is high and cost is kept to a minimum, Exergyn is working with a third-party multinational company in the cooling industry (an internet search reveals Carrier).

It is expected that the next generation of the current 60kW system will be tested at a customer’s site for the first time.

As part of a Disruptive Technologies Innovation Fund grant the company won two years ago, Exergyn is currently working with Dublin City University on a comprehensive life-cycle assessment (LCA) of the technology.

At the start, O’Toole says the LCA is going to be higher because more nickel and titanium is being brought into the market, so there is going to be more mining. ‘But there will come a point where you can start recycling the material because it doesn’t evaporate at the end of its life. But we don’t know what the end of life is because we’ve run the equivalent of 40 years and it hasn’t failed,’ he says.

The main barrier, says O’Toole, is not closed-mindedness towards the technology, but that people don’t understand it. ‘People have been working with vapour compression for 100 years, and we come and say this lump of metal is going to do that, and do it cheaper. We have to explain how the system works to get people to come round to it, in conjunction with the legislative changes,’ he says.

His vision is that the SMA technology replaces vapour compression systems because ‘I don’t see a “golden refrigerant” at the moment that ticks all the boxes,’ he says. ‘A GWP of 1 is still infinitely more than zero.’

Some lower-GWP refrigerants have toxicity and flammability issues, which means ‘more stuff has to go into your system to protect it’, says O’Toole.

‘Being GWP-free and non-leaking, our technology circumvents that. So, by hitting the efficiency and cost and size targets, we’re hoping to make this a no-brainer retrofittable technology that coincides with the rollout of new [F-gas] regulations,’ he says. ‘Something’s going to have to change and, if you go to the legislators and present a viable alternative, it’s possible that this could explode.’ But not literally, he hastens to add. ‘It’s coming to the right time, and we will push that message out there and, if all the stars align, it could revolutionise cooling.’