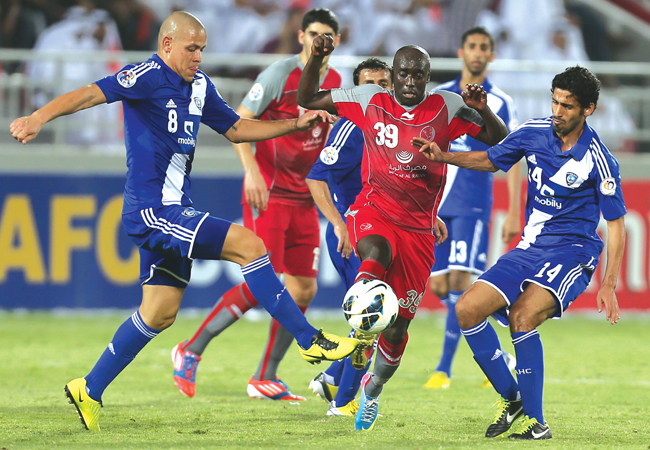 Since Qatar won the bidding to stage the 2022 Fifa World Cup, engineers in the country have been researching the application of air conditioning in sports stadiums, using solar energy to supply some of the electricity for the cooling system.

The biggest challenges of air conditioning outdoor spaces – such as parks, holy sites and stadiums – are the difficulty of controlling the temperature and humidity, and the enormous amount of energy needed for the cooling system. 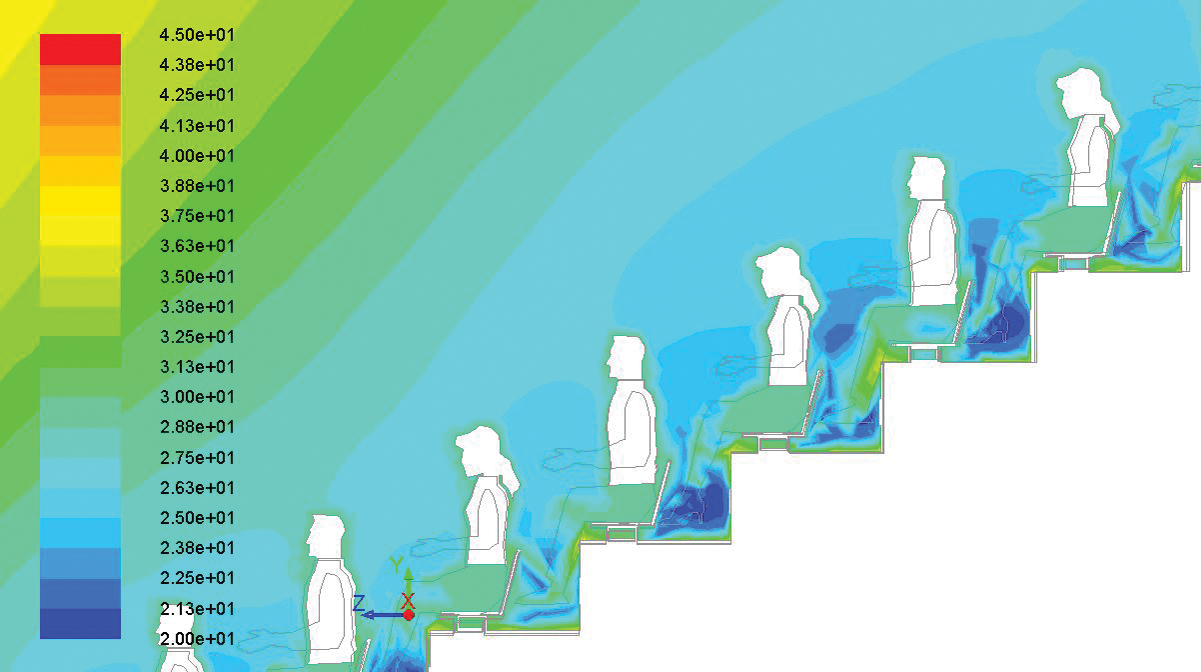 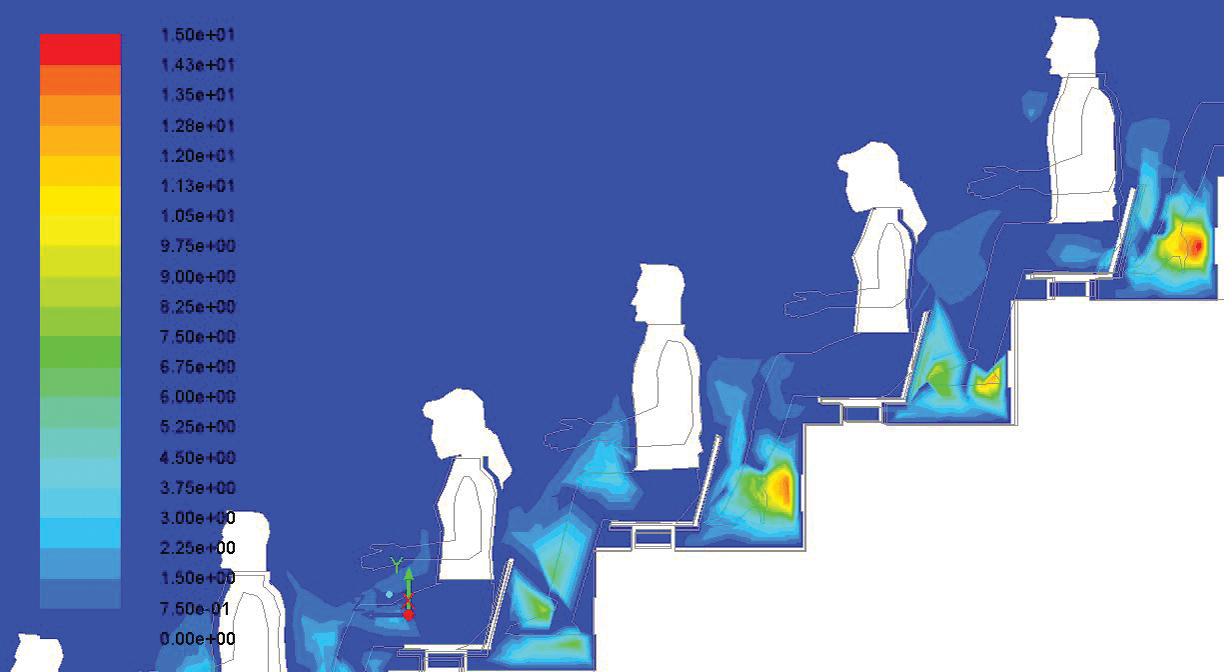 Our research investigated the technical and economic aspects of cooling outdoor spaces, such as a football stadium in Qatar. The main task for the analytical model was to find a better method of distributing air to achieve thermal comfort for both the players and spectators inside the stadium.

Computational fluid dynamics (CFD) was used to predict the best way to distribute the air inlets and to simulate the airflow patterns to overcome the high ambient temperature and relative humidity.

The main objective was to create a simplified simulation model for analysing CFD results of the Qatari stadium’s air-inlet distribution to achieve the best circulation of air and predict its influence on thermal comfort.

The simulation results were used to validate the simplified simulation model, and find solutions and proposals to achieve thermal comfort. 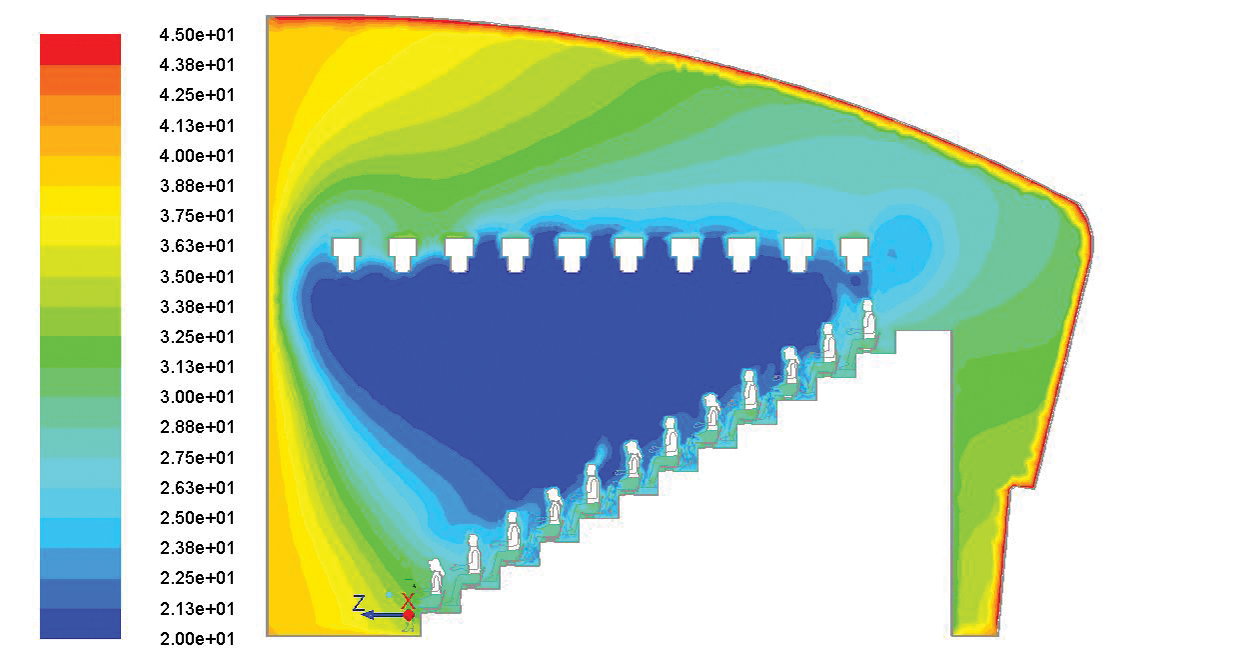 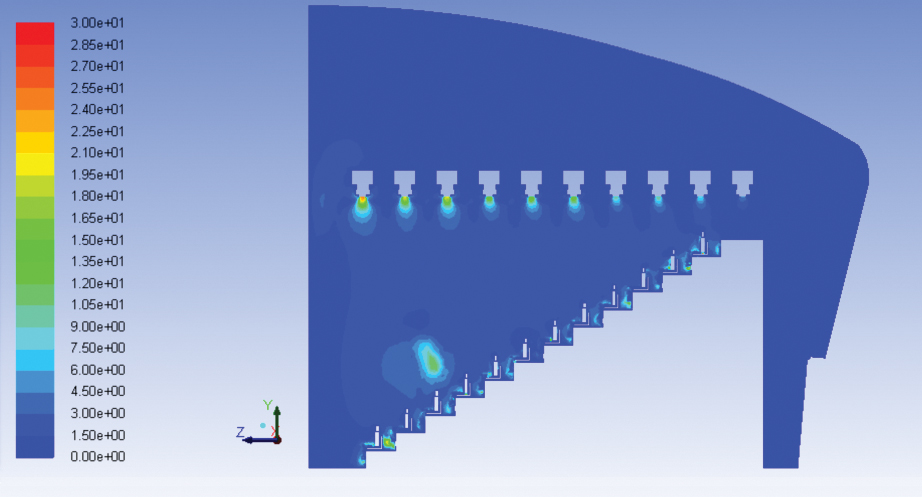 CFD is often applied to various fluid-flow problems to predict a fluid’s properties, including flow velocity, density, temperature, and chemical concentrations for any area where flow is present in a model. In HVAC applications, distribution, speed and air temperature to create the best opportunity to achieve thermal comfort.

An optimised numerical grid was established for calculations. Orthogonal grids can be used, but they cannot represent curved and contoured shapes, so tetrahedral grid nodes – formed of triangle-shaped elements – were used. The grid had in excess of eight million grid nodes that gave converged solutions and grid-independent results.1

The study used two sets of calculations to simulate games that will be played in the afternoon and at night.

The study was based on the 12,000 capacity Lekhwiya Sports Stadium – in the Duhail district of the capital city Doha – which is fully exposed to the 2,100 kWh·m-2 annual horizontal solar irradiance (compared with 1,000 kWh·m-2 in London).2

The locations of air inlets and outlets to achieve thermal comfort had to be selected in the spectator zone, and three methods of supplying air conditioning were examined using the CFD model.3-6

CFD was used to simulate three design scenarios in the spectators’ area: 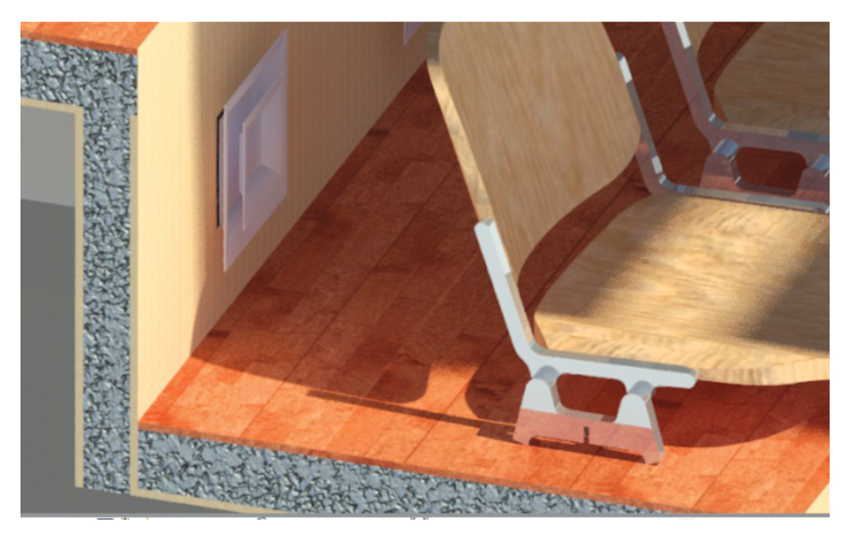 Seats made of wood or plastic would aid spectator comfort

Scenario 3: supplying cold air from above the seats with velocity between 5 and 25m·s-1 and temperature of 18°C, and a radiant cooling system in the slab of the stands to absorb a proportion of the heat. The 15mm diameter embedded pipes are supplied with a mean water temperature of approximately 6°C. As before, the supply air velocity from the stands in the front row is 25m·s-1 and 5m·s-1 in the last row.

This study investigated air distribution to achieve thermal comfort in many proposed simulation designs. In each case, velocity, temperature and humidity were predicted in the model. 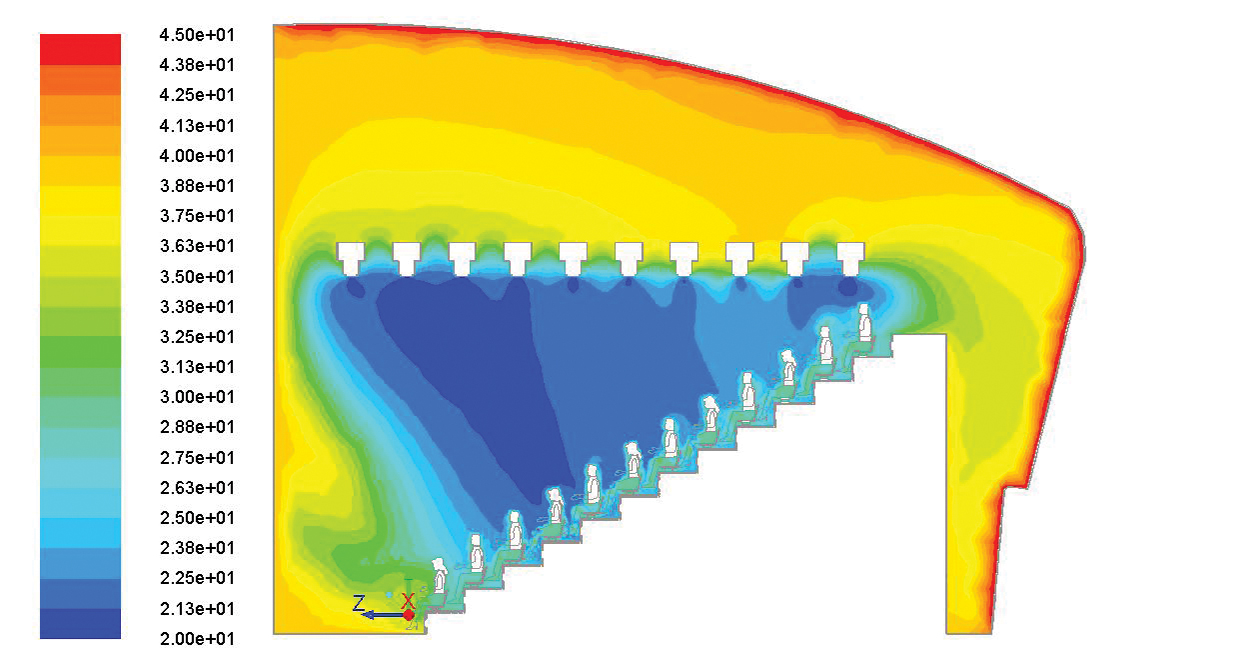 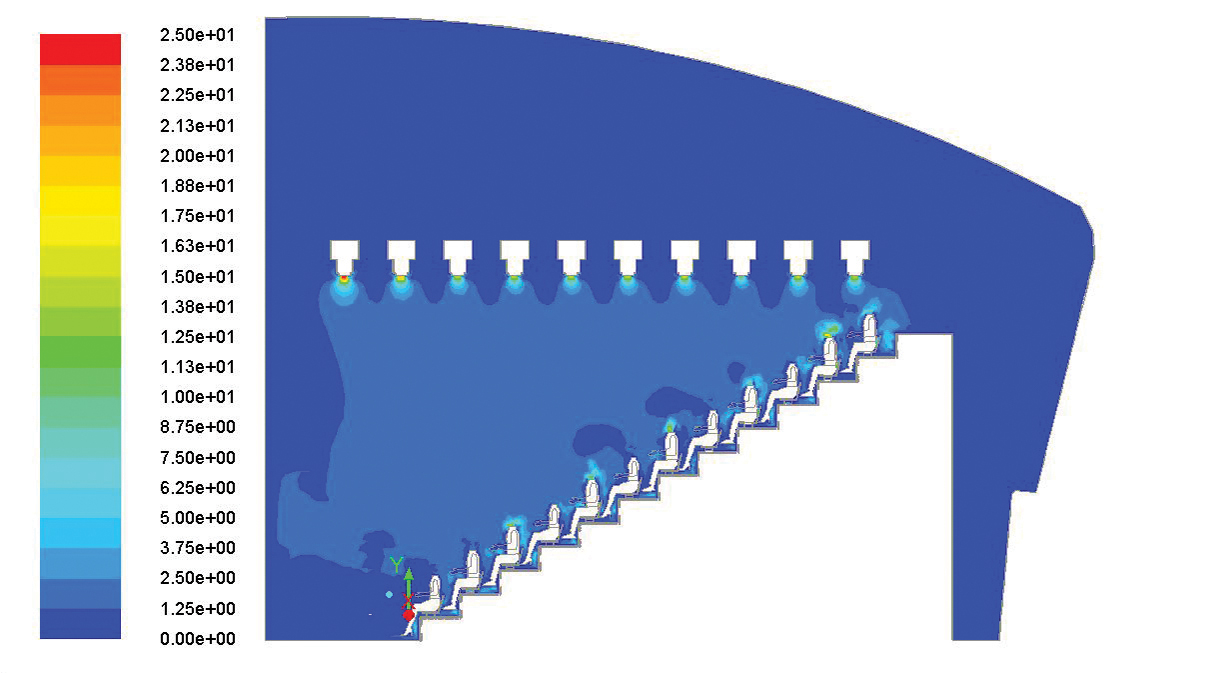 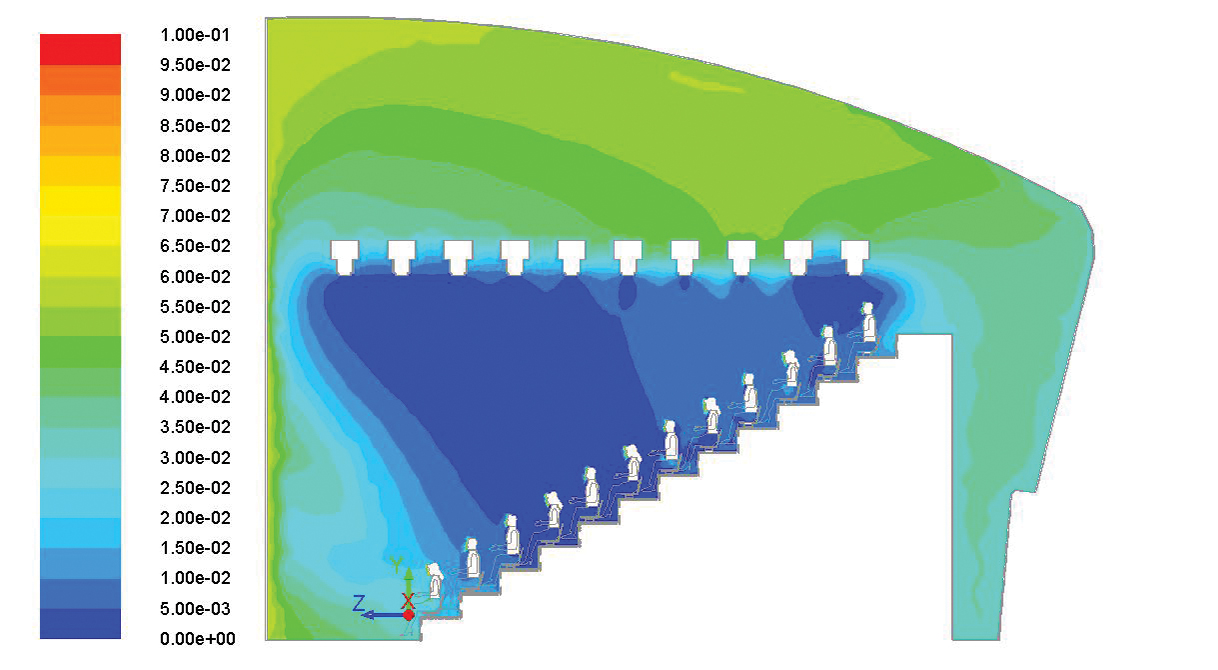 The results of the first scenario are shown in Figures 1 and 2, which identify air distribution inside the stadium and the effects of supplying cold air from behind the seats.

They illustrate that the distribution of temperature in the stands is not suitable, with the temperature of about 23°C behind the seats.

In addition, the chairs and spectators become obstacles for the cold air movement. Seats made of materials
such as wood or plastic – which do not store heat – were recommended to reduce opportunity for spectator discomfort.

The results of Scenario 2 consider the effects of a high level air supply, and air extracting from behind the seats. Figures 3 and 4 show the temperature and velocity contours for this case.

These figures illustrate that the temperature distribution in the stands is more suitable than that of Scenario 1.

In addition, the chairs and spectators don’t become obstacles to the cold air movement. Also it is notable that the humidity is relatively low in the stand areas.

The results of Scenario 3 show the effects of cold air supply from above and air return from behind the seats with radiant cooling in the stand slab.

Figures 5, 6 and 7 show the temperature, velocity and humidity contours for this case. The results show that the temperature distribution in the stands is more suitable than in Scenario 2, with the radiant cooling absorbing the heat and maintaining the temperature inside the stands. Here, neither the chairs nor spectators become obstacles to movement of the supplied cold air. 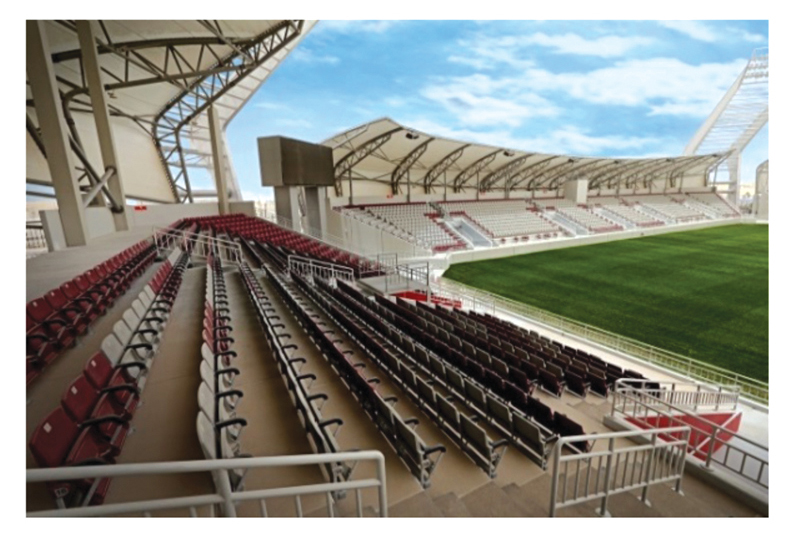 The study was conducted using CFD simulations to improve the air distribution in stadiums and achieve the target thermal comfort in three proposed designs.

In the simulations, results were obtained by changing the location of air inlets and outlets – and adding radiant cooling – before comparing the predictions in each scenario.

The results of the study concluded that the system designed for air conditioning a Qatari stadium was adequate to provide thermal comfort.

The main conclusions are: