It started with a blank sheet of paper and a consultant’s daydream to do air conditioning better,’ says Roger Olsen, associate director, building engineering, at Arup. That was in 2012. Now, a decade later, Olsen is chief technical officer of Artus Air, an Arup spin-off business set up to sell his innovative packaged, hybrid air conditioning device with the energy efficiency of a chilled beam and the flexibility and output of a fan coil unit (FCU).

The compact air conditioning unit measures 600mm x 600mm, so can slot into a standard suspended ceiling grid – and because it is only 200mm deep, it is ideal for installations with a constrained ceiling height. Its most impressive feature, however, is that it uses up to 89% less energy than fan coil systems. Artus was recognised in the 2021 CIBSE Building Performance Awards, for which it was shortlisted in the Product or Innovation – Thermal Comfort category.

The key to Olsen’s design is its patented U-shaped, 200mm-high vertical heat exchange coil, which encloses the unit on three sides. ‘You get a better rate of heat exchange from one continuous coil than from three separate units,’ says Olsen.

The coil’s large surface area enables air to pass over it at a low face velocity of about 0.6m.s-1. This is similar to the air velocity through a passive chilled beam and significantly lower than the 2.5m.s-1 face velocity common in FCUs. ‘It’s a quarter of the face velocity [of a FCU] and, therefore, a sixteenth of the pressure drop for the fan to overcome – and, hence, it has very low energy in use,’ explains Olsen.

An axial fan is used to pull air through the coil and move it down into the space. Olsen says a ‘lightbulb moment’ was to fit a low pressure-drop fan to the unit to pass air though the coil, rather than connect up ductwork from central plant to get the extra airflow. The fan selected is an off-the-shelf unit, powered by a standard variable speed, electronically commutated, direct-current motor. What makes it suitable for this unit, however, is that it is fitted with a bespoke, injection-moulded shroud, which ensures a wide airflow distribution.

Unusually, the fan is mounted behind a fascia panel on the underside of the unit. This allows it to supply the tempered air directly into the space in a swirl pattern. Its even distribution is similar to the effect created by the secondary ductwork legs on a conventional FCU. ‘Because the axial fan is rotating so slowly [at about 700rpm] the air does not flow straight down; instead, the fan generates a swirl pattern that induces and mixes the air in a similar fashion to that of a swirl diffuser,’ says Olsen.

A consequence of the low pressure drop is that typical specific fan power (SFP) for the unit is 0.06 to 0.08. Ed Sayce, projects director at Artus Air, says a typical fan coil unit would have an SFP of ‘0.2 at best’, while the backstop for Part L for non-domestic services is an SFP of 0.25.

‘We’re only using 20% of what is allowable, which is an 80% improvement in the SFP. We’ve modelled for a model office scenario (see panel, ‘Modelled energy use in an office’), where it saves 21% of the regulated energy against Part L – which is a phenomenal saving for what is a simple concept,’ adds Sayce, who points out that the SFP in the Part L calculation is 100% of load, but ‘for most of the time, the fan will be running at about 60% of that figure’.

Furthermore, the fan speed is variable, to save energy and reduce fan noise. Maximum fan speed is set based on the noise level required in the space. The unit can achieve noise levels as low as NR22, which makes it suitable for use in residential applications. In an open-plan office, however, an acceptable noise level is NR35, with a 5dB relaxation allowed in the British Council for Offices Guide to Specification for a variable speed system. 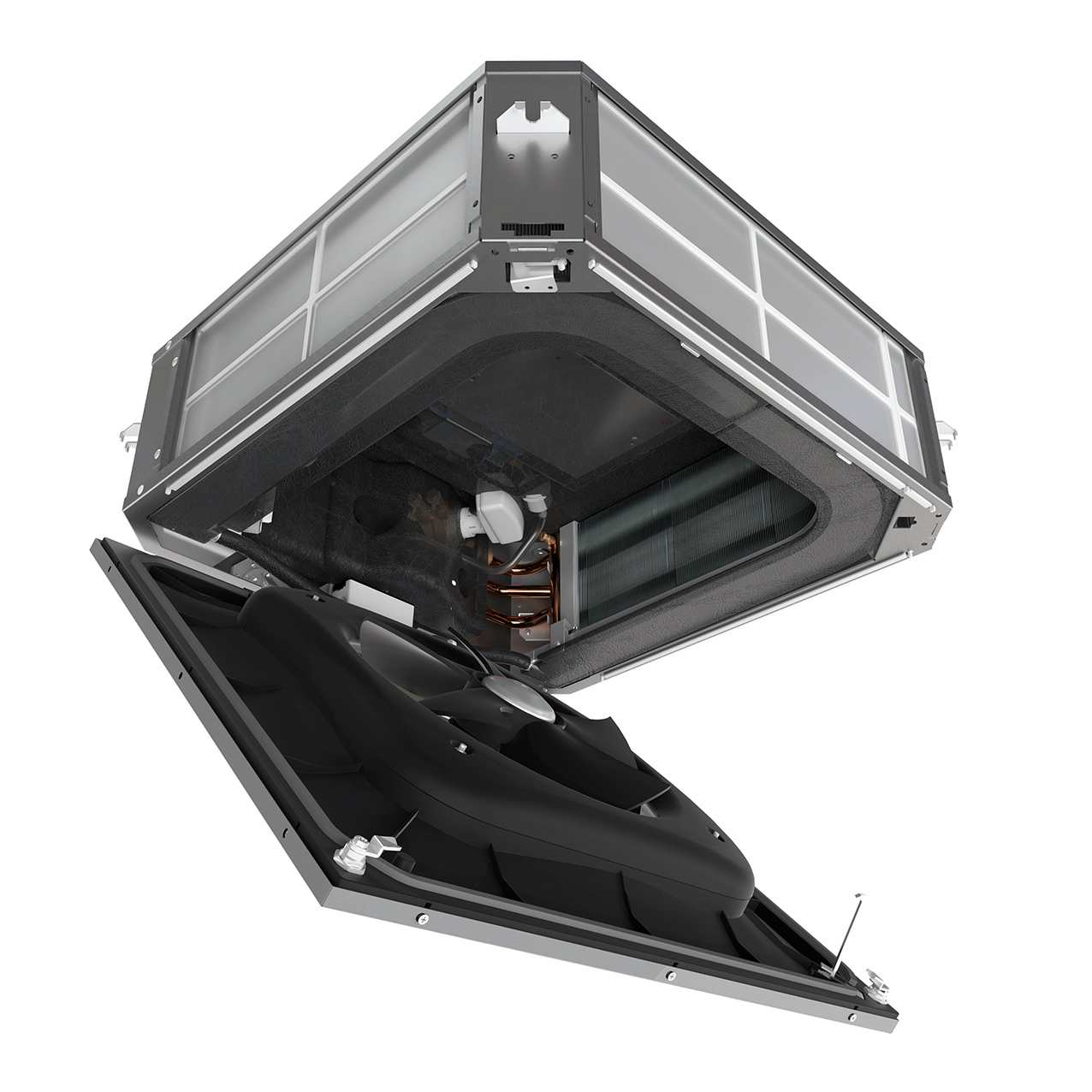 ‘We start with NR40; because we’ve done loads of acoustic modelling, we know that – if the units are spaced every 25m2 – the fans can run up to 140L.s-1 per unit, which is how we work backwards to the cooling capacity,’ says Olsen.

The unit comes packaged with the pressure-independent control values, the controller, and condensate pump pre-fitted, to enable predetermined software in the controller to always run the components in the lowest energy-use mode.

‘When you buy these components separately, as is common with a conventional fan coil system, you are reliant on onsite coordination of these components, whereas we’ve got certainty of component compatibility and performance because we’ve tested it all together,’ says Sayce.

The coil is sized to provide 2.4kW of sensible cooling based on chilled water at 6°C flow/12°C return, which Olsen says is ‘a bit smaller than the duty of some conventional fan coils’. The consequence is that more units will be needed for a Cat A office fit-out.

Despite the increased number of units needed, Sayce claims the installation is still cheaper than one based on conventional FCUs. ‘We’ve done the exercise several times with external quantity surveyors: the capital cost is cheaper because you need to add in the cost of the secondary ductwork, grilles, controller, and condensate pump to the cost of a conventional fan coil,’ he says.

‘That’s before you add in the huge contractor savings on quicker install time, reduced procurement, less controls work and less commissioning because there is no secondary air balancing, and the operational savings from low energy use.’

The unit can also run at an elevated chilled water temperature of 14°C/17°C, when its cooling duty will drop to 1.3kW of sensible cooling. ‘Fan coil installs are typically spaced between 30-35m2 per unit; by comparison, Artus is about 25m2 per unit with chilled water at 6°C/12°C. The spacing drops to about 12m2 per unit if you are running chilled water at 14°C/17°C,’ Olsen explains. If you were to design a scheme to run at this elevated cooling temperature, you would, in theory, need almost double the number of Artus units. However, a proprietary software and control system has been developed to provide a cost-effective solution for applications designed to run at 14°C/17°C. ‘We realised that, for most of the year, 14°C/17°C is fine, because the peak cooling load only occurs for about 50 hours per year; for nearly all the rest of the time, it is running at almost 50% load,’ says Olsen.

The software overlay and intelligent control system looks at all of the units to see how hard they are working, to optimise the flow temperature through the chillers using bespoke algorithms. This allows the system to drop the cooling water temperature to 6°C/12°C during the 50 hours of peak demand without compromising system energy efficiency for the remainder of the time, and without the need to buy more units.

Under current Breeam for refurbishment and fit-out criteria, the 10% energy saving in changing from a compliant FCU to these novel units would give at least three Breeam points. With the bespoke controls optimisation and reporting software installed, to maximise energy savings in operation, it is possible to achieve up to seven Breeam points. 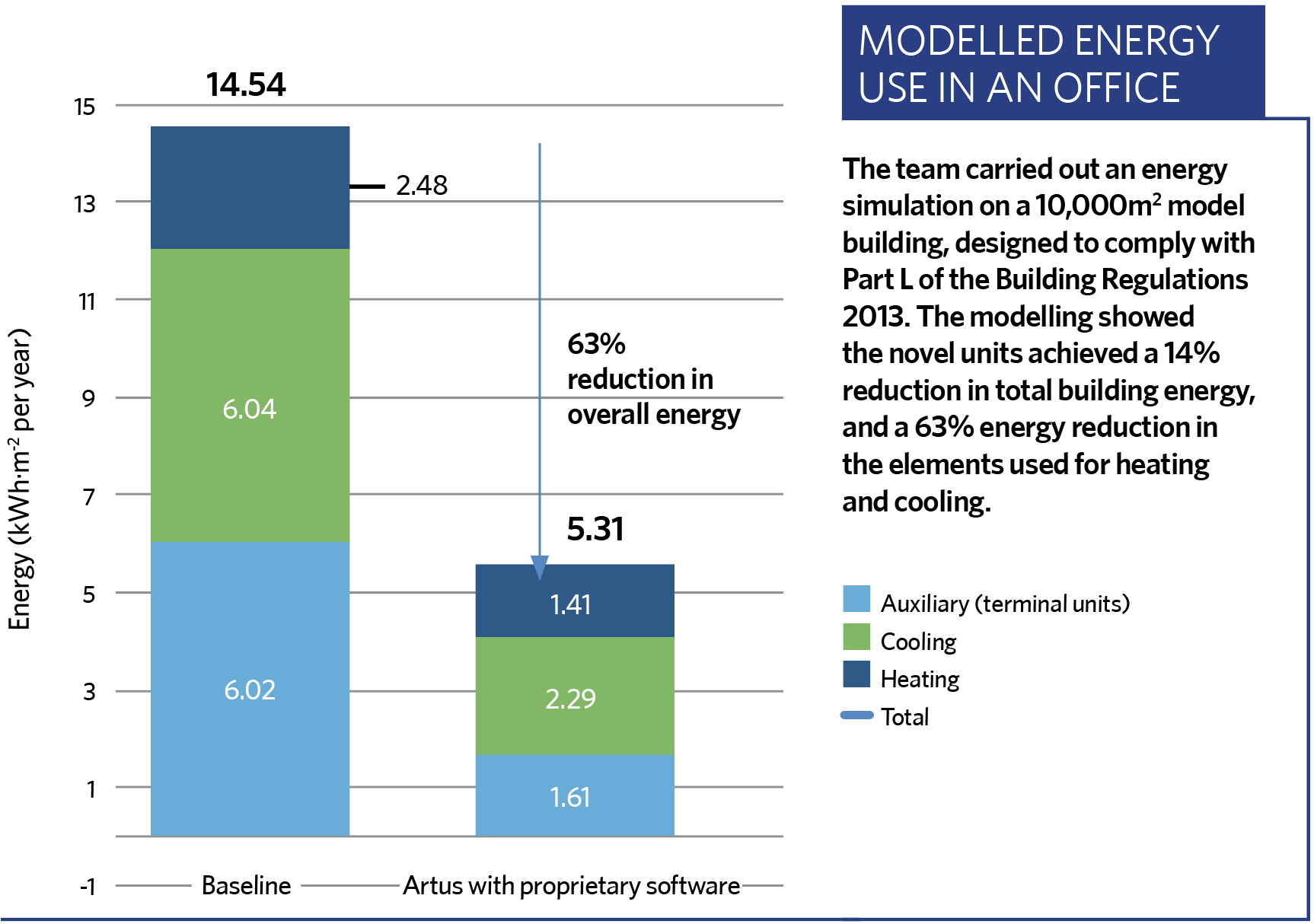 There is big thermal advantage in using a single coil when the unit changes from coiling to heating mode. If you run the heating circuit at 80°C flow/70°C return, the coil will be ‘massively oversized’, says Olsen. However, he adds, the advantage of the oversized coil is that it opens up the possibility of using heat pumps – for example, to run the heating system at 35°C, ‘and still get all the heating you need from the one coil’. For those hesitant or unable to use the coil changeover option, an Artus model is available with separate heating and cooling coils installed.

Since its launch, Sayce says the Artus unit has been particularly popular for healthcare applications, because everything that needs to be accessed, including the filters, can be reached from below by dropping the unit’s hinged front face. This avoids the need to remove ceiling tiles to access the ceiling void.

The unit is also expected to be popular for use in cooling high-end apartments, where its low noise level, combined with its shallow 200mm depth, means it can be accommodated relatively easily without the need to increase ceiling heights significantly.

In fact, the unit’s shallow depth, when compared with a FCU, means that – on a tall building of 12 storeys or more, with a maximum development height – the use of these units could allow developers to squeeze in an additional floor. If a developer can add 7-8% to the floor area of a development simply by using a different HVAC system, it could impact the viability of some developments.

With several successful installations now completed, Olsen’s daydream has been realised. However, he’s not put away his blank sheet of paper. In response to Covid, he’s now working on an anti-viral version of the unit, which would recirculate and clean the air. Watch this space…