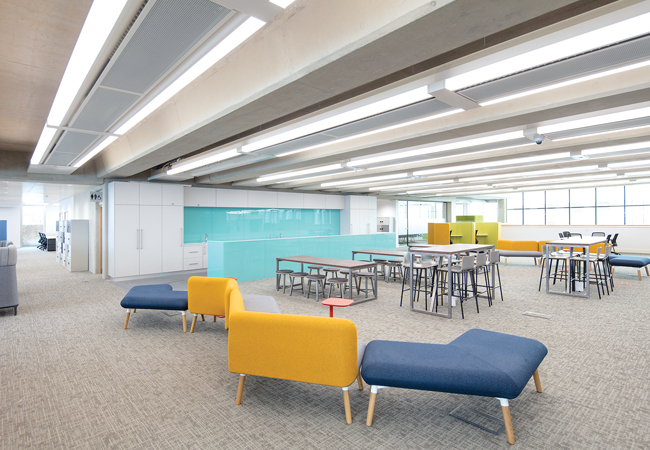 The need to supply fresh air over a large open-plan office with limited space and locations for the service risers and bulkheads led to the specification of 778 multi-service chilled beam (MSCB) sections, and 39 ceiling-integrated chilled beam (CICB) units, at Lambeth Council’s new £45m civic centre.

Frenger’s prefabricated MSCBs, which incorporate cooling, heating, lighting and ventilation, were connected in a series across the 11,000m2 of office space over six storeys.

The civic centre building has an energy centre on the roof and district heating and cooling networks that serve the site. It features an open-plan office, central atrium, meeting rooms and cellular offices.

Limited space and locations for the service risers meant that, to achieve adequate distribution of fresh air over the floor space, the design team and Frenger used long runs of MSCBs, with the fresh air connected in series. The air chambers effectively became the distribution ductwork, eliminating the need for ventilation ducts.

The ability to partition office space and maximise ceiling heights were two of the key benefits of the specification of MSCBs. 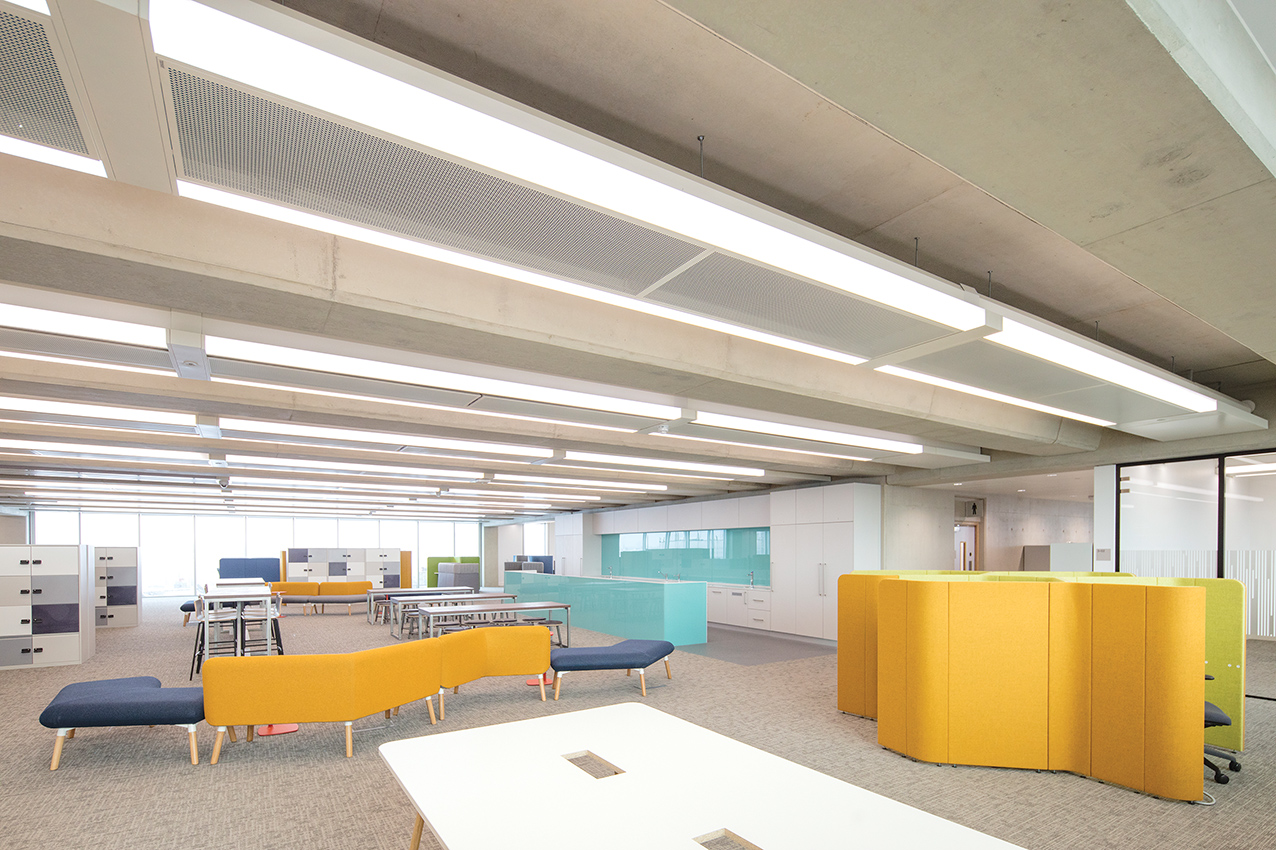 Low-temperature hot water (LTHW) and chilled water (CHW) circuits from the energy centre – as well as tempered fresh air – is distributed around the building via dedicated risers, and routed to chilled beams using high-level distribution bulkheads on each floor.

The MSCBs use Frenger’s patent-protected burst-nozzle design – a multi-layered nozzle strip that enables a highly accurate and evenly distributed supply air volume at a given pressure at any point along the length of the active chilled beam air discharge. This means each unit is able to deliver correct fresh air volumes for each specific control zone, based on the upstream static pressure. With the burst nozzles factory set to the exact air volume and pressure (also allowing for pressure drop from one MSCB section to another), this eliminated the need for dampers to site set each beam to the design air volume, apart from one damper to the first beam in the run.

The large open-plan areas meant the chilled beams had to be designed to accommodate higher-than-normal fresh air volumes of up to 150L·s-1 per MSCB run of five separate units in series (totalling 15m each) – a rate of 10L·s-1·m-1. This was requested at the early design stage to future-proof the system for maximum occupancy of one person every 3.5m2 – each person with 12L·s-1 and the required design static pressure for that air volume being 100Pa to the first beam in the total run. The static pressure when ‘turned down’ yields the current occupancy of one person every 10m2 with 12L·s-1 per person –around 55L·s-1 for the 15m run.

To ensure each MSCB section delivered the correct air volumes, the manufacturer physically tested the proposed series of MSCBs in one of its BSRIA-calibrated microclimate laboratories. The completed testing confirmed the relationships between air supply volumes and static pressure loss, thus ensuring the MSCBs connected in series would ‘self balance’ and each deliver the correct fresh air volumes.

Given these high air volumes, noise-level testing was carried out within a hemi-anechoic acoustic testing laboratory, to ensure the MSCBs did not generate excessive noise.

One challenge was to ensure the fresh air supplied by dedicated air handling units (AHUs) did not present a risk of condensation when used in conjunction with the chilled beam system. Frenger, ChapmanBDSP and AHS, the AHU manufacturer, formed a coordinated design to ensure that the risk was negated by supplying air at 18°C and 45% relative humidity. LED lighting was specified for the chilled beams to reduce energy demand as well as limiting the lighting system heat gains to 8W·m-2. 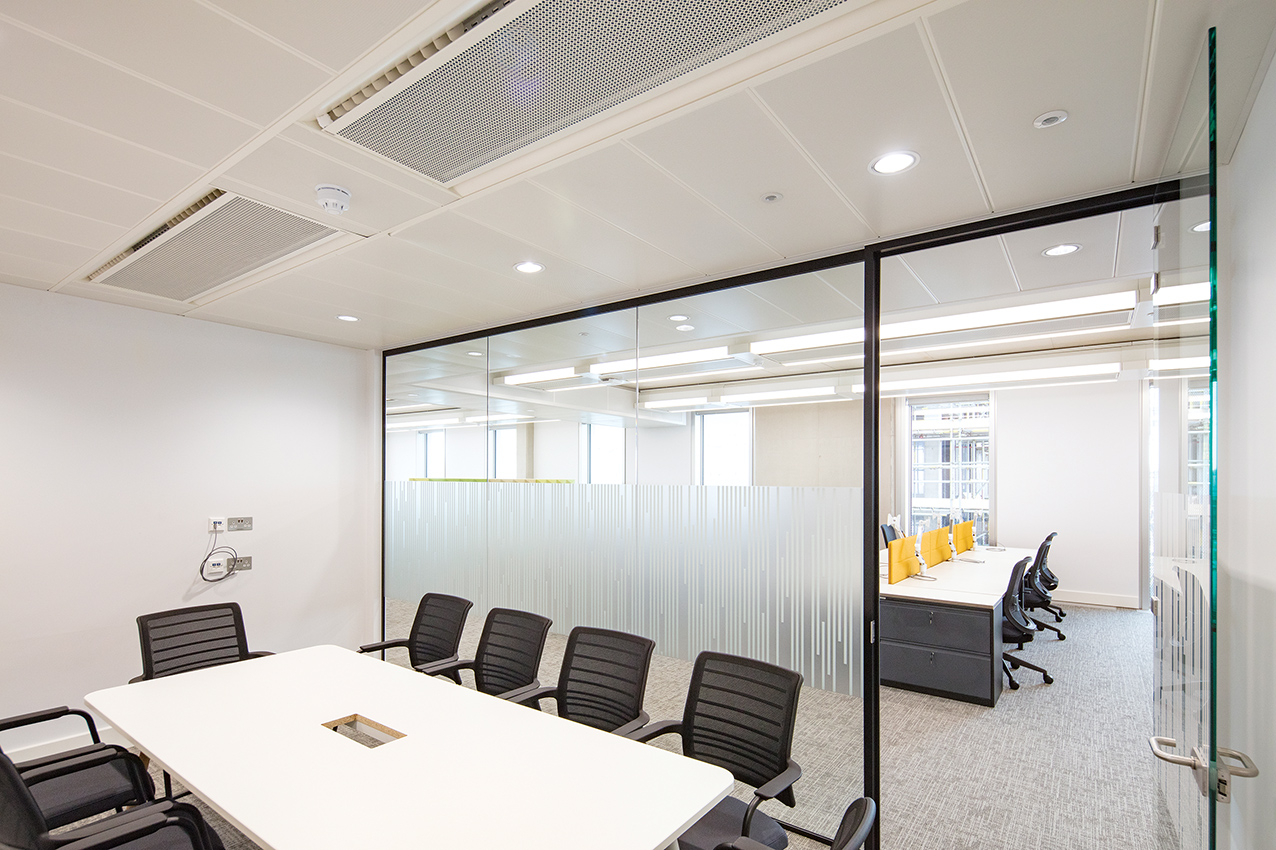 This meant no individual commissioning valves were required to regulate flowrates. To achieve this, several specifically designed heat exchanger coil manifolds were used to control the waterside hydraulic pressure at the given design mass flowrates.

Their design, scheduling and manufacture was more difficult because of the combined permutations of the airside connections in series and waterside circuit connections in parallel.

However, the scheme offered financial savings for a reduction in ductwork, dampers, controls and commissioning valves, and saved considerable site labour time associated with the installation and commissioning.

Future flexibility of office space is a key consideration for developers, so it is important that services can adapt to the changing requirements of building owners and occupants.

The MSCBs at Lambeth Civic Centre were 2.8m-long units, each with a 200mm-long removable joining infill dummy section to create 3m partition breaks on the typical five-unit, 15m runs. This also allowed flexibility for shorter runs, enabling partitions to dissect the run of MSCB units.

Typically, the British Council for Offices (BCO) calls for structural grids of 6, 7.5 , 9 and 12m as this works well with its preferred standard planning grid of 1.5m increments and perimeter room widths of 3m, 4.5m and 6m (with a work space density of 8-13m2 per person).

In between each unit section there are removable short-length joining infill panels that conceal any plug and play interconnections, which are fed from a central bulkhead (for exposed roof soffits) or notional corridor (for suspended ceilings). Lighting can also be fitted into the infills if the aesthetics of a continuous light source are desired. 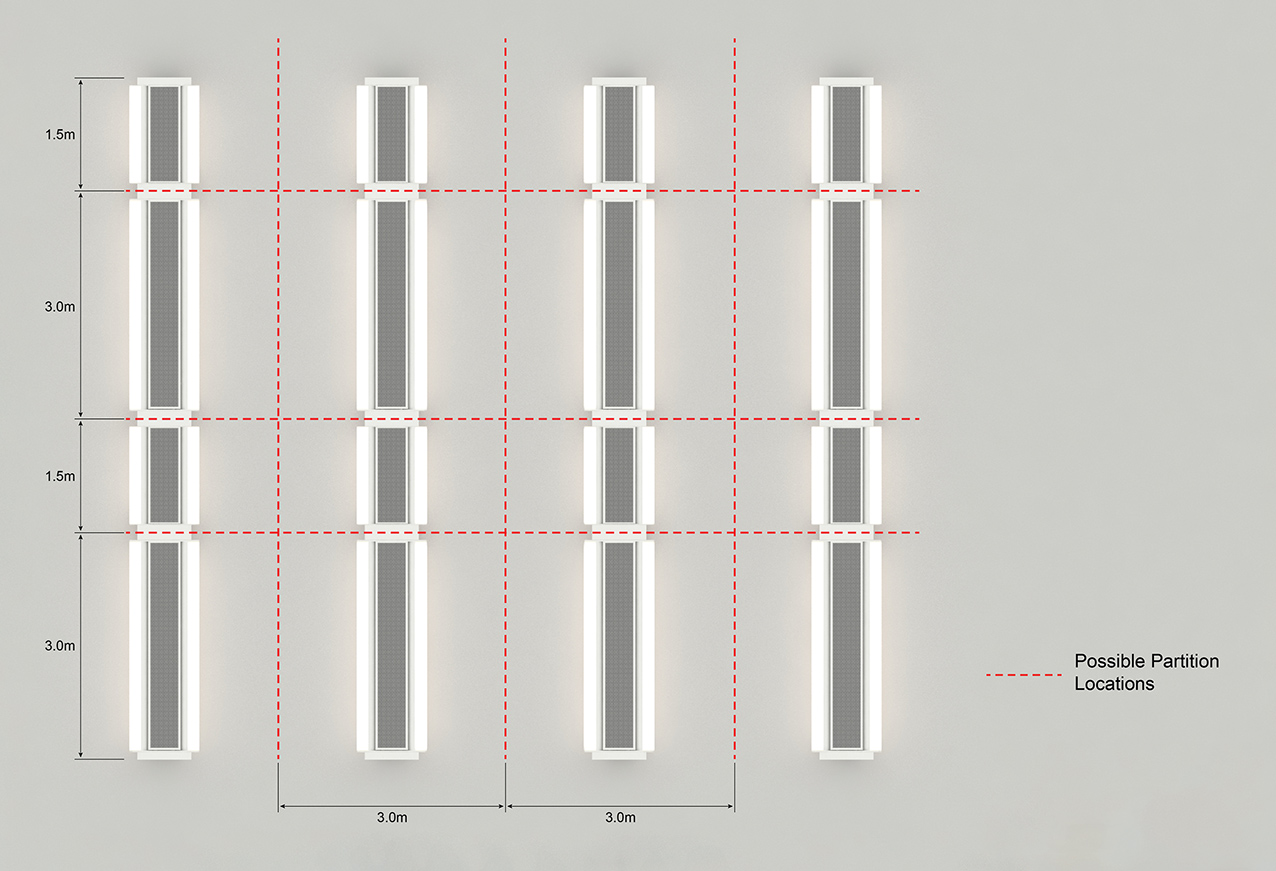 Frenger has supplied MSCB projects with LED lighting with 500 lux on the working plane, with drivers factory set at as little as 230 milliamperes per linear metre and 4.8W·m-2 energy consumption. So it is possible to dim to 300 lux or increase the milliamperes to exceed 500 lux, although consideration should be given to uniform glare-rating indices.

Frenger has also supplied MSCB projects with two-part heat exchanger coils (spilt coil) so sprinkler heads and other services, such as PIR sensors, can be located anywhere along the length of the MSCB unit sections.