The flats at Salford Quays, Manchester, are highly glazed

There’s been a huge emphasis on improving the thermal performance of our buildings so we use less energy and spend less money to stay warm in the winter.

It’s paid dividends for the energy efficiency and comfort of modern homes and offices, but contemporary design trends are now creating another thermal-performance challenge – overheating in blocks of flats.

This summer’s heatwaves, combined with architectural trends for glazed façades, mean overheating is becoming a serious concern. If the building is constructed of concrete, solar gain during sunlight hours is stored as heat in the structure overnight, and urban locations often prevent the introduction of opening windows for natural ventilation. It all adds up to a strong likelihood of apartments overheating to unacceptable temperatures, particularly in bedrooms.

CIBSE’s TM59 Design methodology for the assessment of overheating risk in homes specifies a sleeping environment of 26°C or above will result in disturbed rest, limiting the health benefits of sleep.

The obvious solution is to have openable windows to allow the movement of air within the space. Often, however, external noise can become an even bigger issue than raised temperatures for inner-city dwellings. 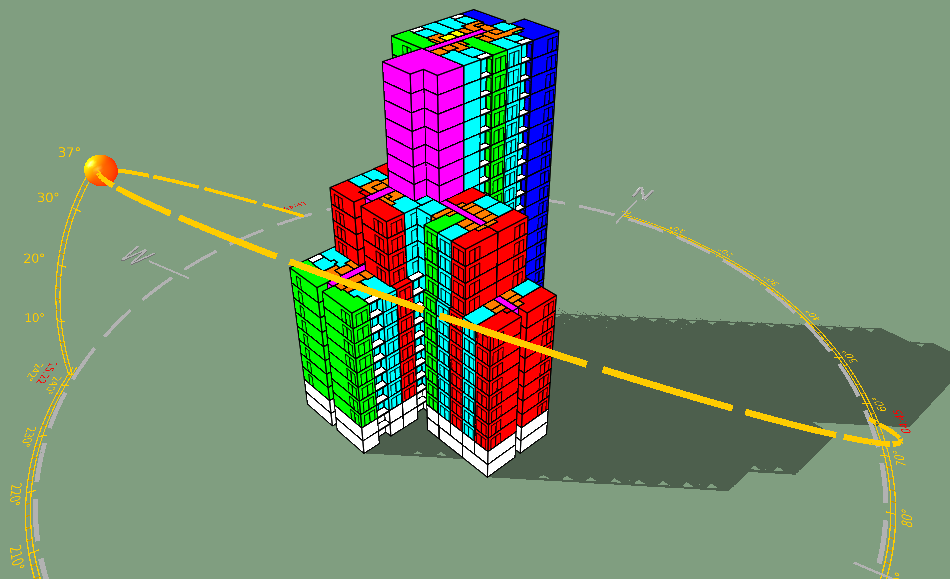 Another option might be to specify glass with a high solar control coefficient; however, this would impact negatively on the standard assessment procedure (SAP) – required to pass Part L – which is weighted towards free winter heating from solar gain. This takes into account the need to keep buildings warmer in winter rather than the potential for overheating which, historically, has not been an issue in the British climate.

Where solar gain is a problem and window opening is not an option, flats have to be ventilated by mechanical means, which usually involves MVHR installation. But even this may not be sufficient to manage the heat gains, forcing specifiers to introduce some form of cooling.

However, installation costs for split-system cooling or refrigerant gas units are high and this option presents design challenges for the architect, who must allow for the units’ space requirements and visual impact. In a high-rise development, many units may be required, resulting in higher build and operational costs.

In August 2017, M&E contractor Proline was commissioned to take the building services engineering for a 20-storey residential tower of 191 dwellings from concept to detailed design and installation.

The project has a large percentage of glazing on the façade, creating an overheating risk when assessed in compliance with TM59. The introduction of conventional cooling would have presented several issues, including spatial challenges and the need to resubmit design changes for planning.

Installation costs would be high too, making the project a lot more expensive to deliver. The running costs and noise of a standard air conditioning system were also unappealing. 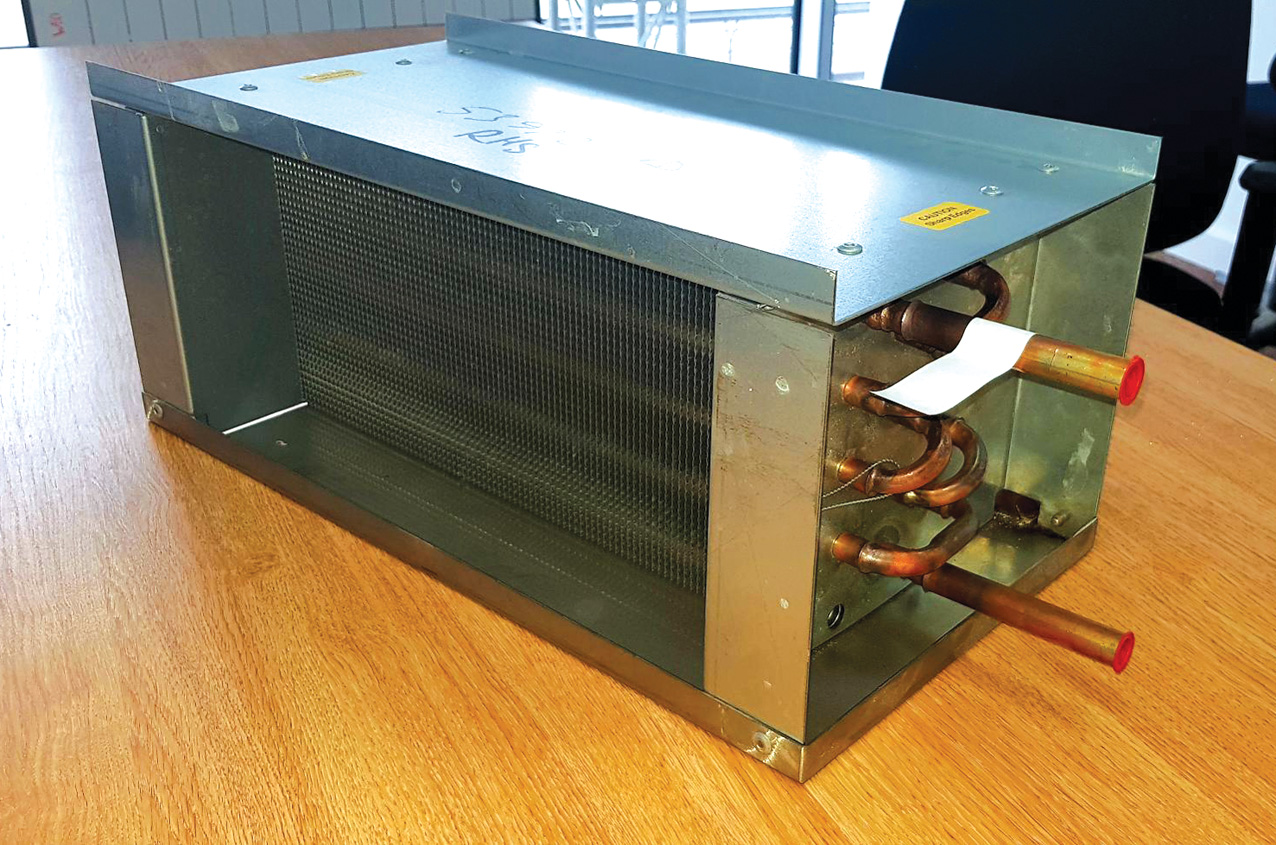 When the TM59 loads and profiles were applied, it was clear the building was failing the overheating criteria by some distance. An attempt was made to control overheating by designing MVHRs into the specification with an air change rate of 8 ACH. However, as well as a lack of space to accommodate the units, construction would have been too expensive.

Design changes to the glass specification were suggested, but reductions to the G-value of the glazing had to remain within the parameters for the building, to satisfy the SAP calculations.

When the building was remodelled with the revised specification, the team was able to reduce the required number of air changes to four per hour – but this was still too expensive and noisy, and insufficient for comfort during the hottest periods. It was also physically impossible to fit units into the voids available for the services.

The magnitude of failure varied depending on the orientation of the apartment, but the solution was kept uniform for ease of maintenance.

The unit fits within the plenum

After experimenting with the thermal model, the team calculated that 0.5kW of cooling introduced into the airflow of the ventilation system would enable each apartment to sit within the limits set by TM59 with a 2 ACH requirement. This is achieved by adding cooling that can be used on an ‘as needed’ basis to reduce the temperature in the bedroom by 6K.

To introduce the cooling into the MVHR system without compromising space, the team developed a water coil in the air supply plenum, and is chilled using cooled water supplied by a district cooling chilled water main.

The system works by intercepting the airflow of the MVHR system in the plenum shortly after the air intake enters each apartment. The incoming air passes over the face of the coil, cooled using water from the chilled district main, before entering the living accommodation to offer on-demand heat tempering, reducing the indoor temperature by up to 6K.

The airflow is then extracted through the kitchen and bathroom via a heat exchanger.

The district main has been designed as a three-stage chiller with a buffer vessel to store chilled water, so reducing the potential for short cycling on the system.

Chilled water flows into the cooling system at 6°C, with a return at 12°C, and residents use a switch to activate the system for their own apartment as and when it’s needed.

The chilled water main is part of the building’s centralised plant that falls within the remit of the developer, who is responsible for building management.

The on-demand heat-tempering design means this 20-storey, private-rented sector scheme will benefit from the space efficiency of centralised plant, while offering each resident control over their indoor environment, with on-demand switching and a dedicated cooling coil for every apartment. The system is practically silent and invisible in the apartments, and is simple and easy to maintain, thanks to a condensation tray accessed via a maintenance hatch.

Both the energy saving and cost benefits are considerable. The capital expenditure cost of installing the district cooling main and individual apartment plenum cooling system has reduced build cost by a six-figure sum, compared with the original 8 ACH proposal.

Centralised chillers will also reduce the use of refrigerant gas and simplify maintenance, while the operational cost will be 10-20p per hour per flat – less than the cost of boiling a kettle.

Schematic of the system

Andrew Mitton is a chartered engineer and managing director at Proline