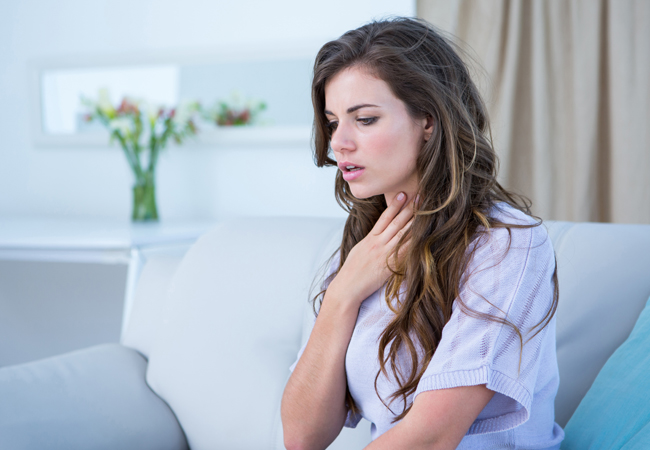 The paper emphasised that a building cannot be too airtight, but it can be under ventilated. This approach built on a BRE publication2 claiming there was wide acceptance that a whole house ventilation rate of 0.5ach-1 – supplemented by  mechanical air extraction during cooking and bathing – was sufficient to dilute indoor  pollutant concentrations and suppress relative humidity below 70% (the threshold associated with problematic condensation and mould growth).

Trickle ventilators incorporated in window frames appeared to be the answer, and this strategy was subsequently enshrined in the Building Regulations as being satisfactory.

In 2011, the Scottish Government – concerned that 20 years of retrofit programmes appeared to be making little impact on condensation dampness figures – as reported in the Scottish House Condition Survey – revisited this area and commissioned the BRE3 to test whether the standard remained robust for a new generation of ‘airtight’ dwellings.

A mid-terrace dwelling at Garston was selected and tested under a variety of conditions. The report concluded that dwellings built to the new airtightness standard of 5m3/m2/hr@50Pa, which incorporate trickle vents, will provide air change rates roughly in line with CIBSE’s recommendation of 8l/s per person.

To those working in the field, progressively aware new dwellings are both ‘stuffy and stinky’ (hence the increase in the air freshener market), such an outcome did not ring true.

The test protocol used by the BRE measured CO2 decrement with all internal doors wedged open, creating a unified air mass of 192m3. Such a test method ignores ‘real life’ scenarios, given that, in practice, occupants tend to keep internal doors closed for reasons of privacy, noise transmission, thermal comfort and, in flats, will be required to do so for fire safety.

There was also no occlusion of the vents by blinds or curtains. Such test conditions would undoubtedly result in external wind conditions driving both positive and negative pressures on the elevations, producing cross, displacement and stack ventilation. The task presented was thus to identify a ‘tightly’ constructed test house, where air quality under ‘real life’ conditions, could be measured in discrete room volumes.

A recently completed Passivhaus in Fife, provided an opportunity and air pressure testing produced a figure of 1.18m3/m2/hr@50Pa. The tightness of this dwelling was then reverse-engineered by fitting tarpaulins to the living and bedroom windows with standard trickle vents incorporated. After achieving the target air leakage/infiltration rate of 5m3/m2/hr@50 Pa, CO2 levels in the occupied living room (five people) and master bedroom (two people) were monitored, for 48 hours.

This award winning paper was published in Building Services Engineering Research & Technology, which is a quarterly journal of refereed papers that CIBSE members can access via www.cibse.org/knowledge

When occupied by two adults and three children, CO2 levels in the living room (Figure 1) climbed at a rate of 514ppm/hour, peaking at just above 2,600ppm. In the master bedroom, which had an unusually large volume for a public sector, tenanted dwelling (44m3), two adults were able to maintain the CO2 level of 2,200ppm for the eight-hour overnight sleeping period – well above the recognised 1,000ppm threshold. For bedrooms with the more typical volume of 28m3, equivalent CO2 generation would be likely to peak at more than 4,000ppm. When the MHRV system was re-activated, CO2 levels fell and were maintained within a range of 910-1,280ppm. 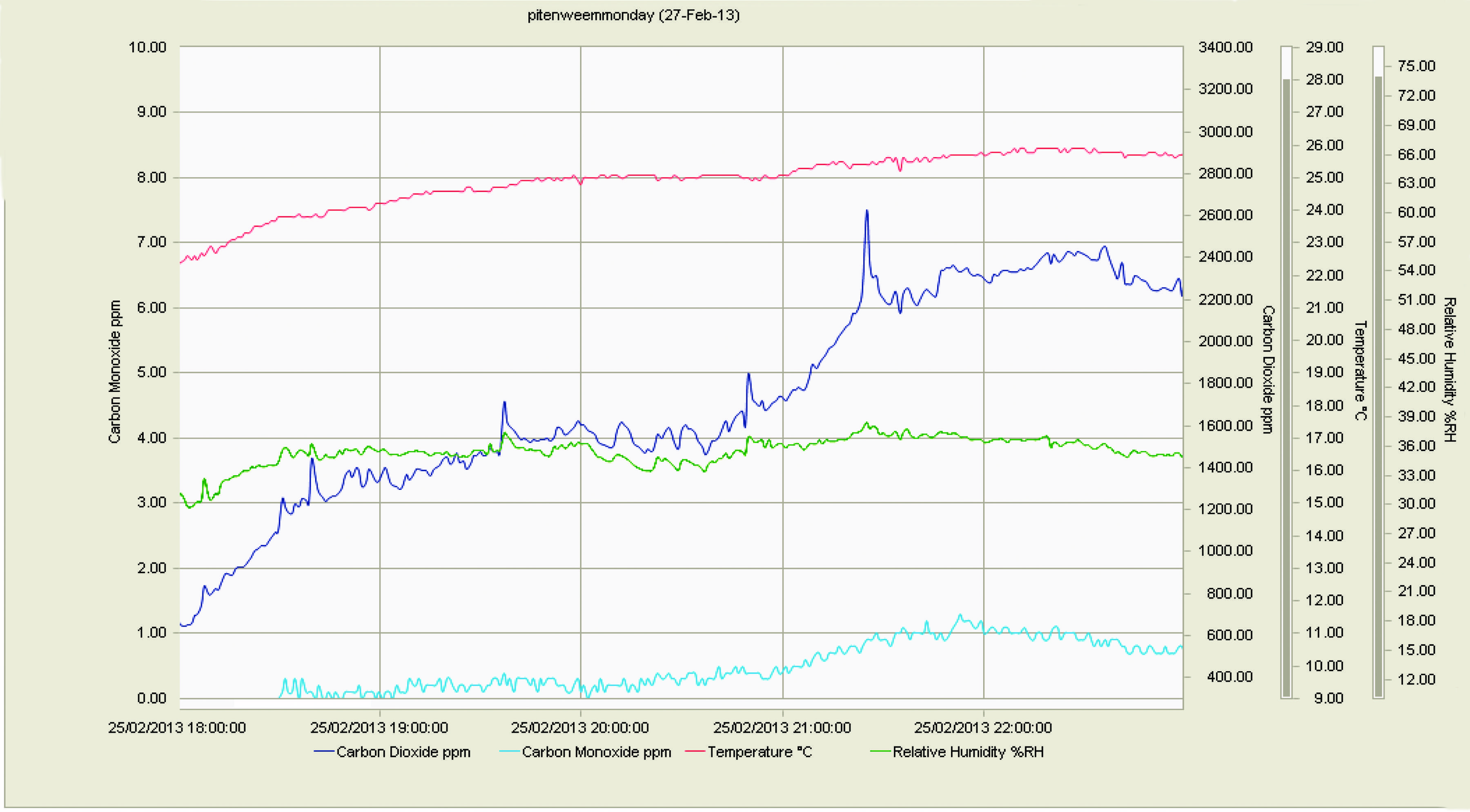 Coincidentally, colleagues at the Mackintosh Environmental Architecture Research Unit were monitoring a range of new-build houses in five locations across Scotland. Airtightness of these dwellings had been measured with an average of 4.66 m3/m2/hr@50Pa. CO2 levels in occupied bedrooms provided a good comparative measure because they tend to have consistent conditions in terms of occupancy and ventilation regimes. Figure 3 shows CO2 levels measured over a seven-day period at one location in Glasgow. 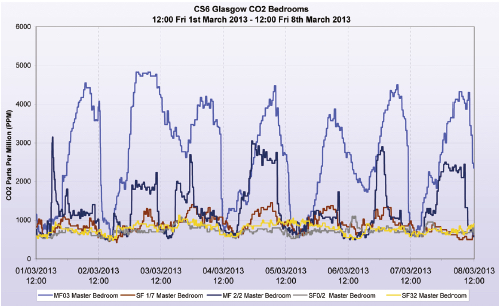 This data shows a consistent pattern for CO2 with levels in the bedrooms consistently rising to an overnight peak of 4,800ppm. Longitudinal observation of CO2 levels across all 20 new dwellings confirmed high levels in bedrooms at night, with an occupied mean peak of 2,317ppm, and an occupied time-weighted average of 1,834ppm (range 480-4,800ppm). Although such levels may induce headaches and relatively minor physiological changes, CO2 is normally found in ‘bad company’, and these figures indicate that occupants in new-build dwellings are being exposed to much higher concentrations of toxic compounds and particulates, off-gassing from a multitude of indoor pollution sources. 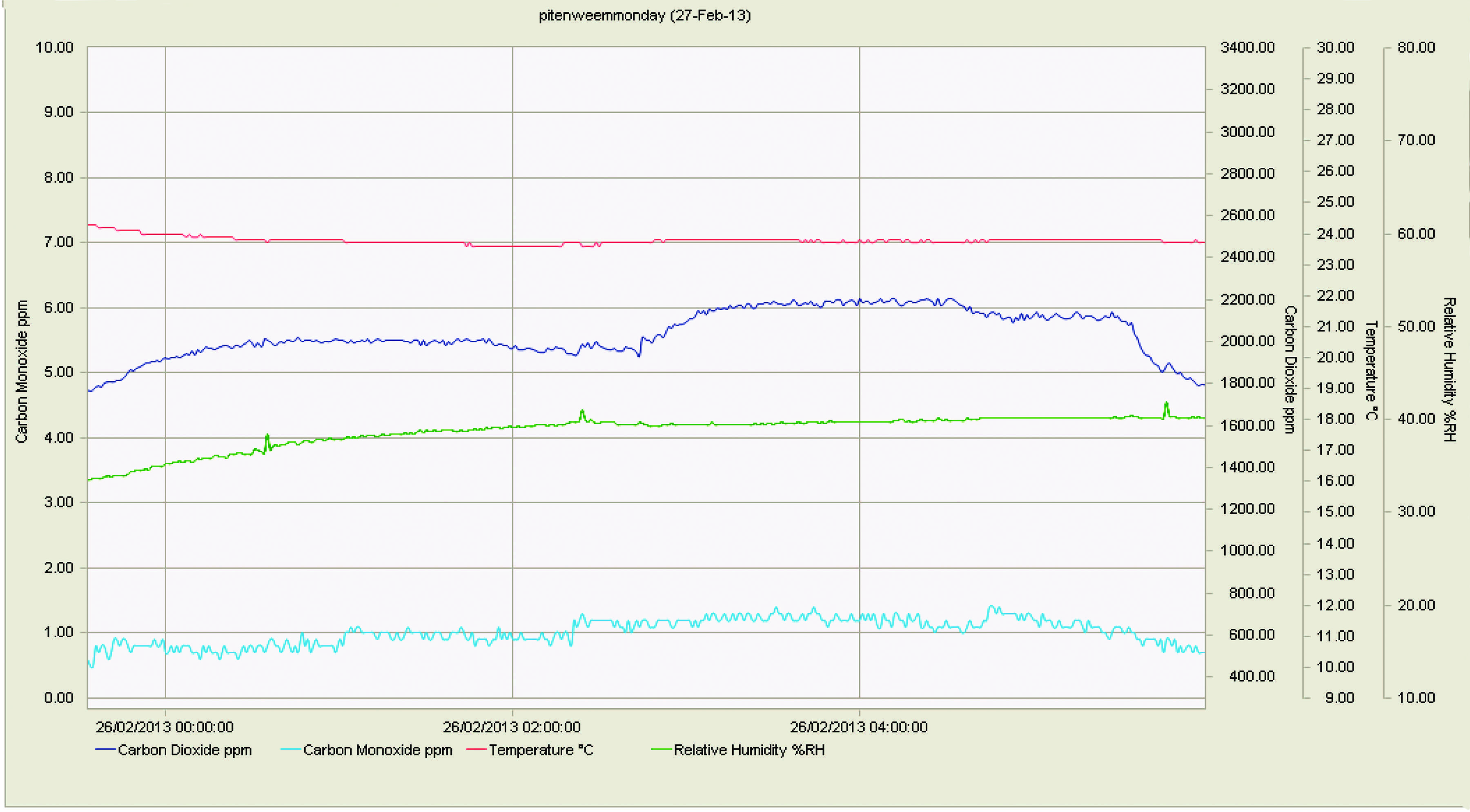 This work triggered a further investigation by the Building Standards Division of the Scottish Government, to investigate occupier interaction with a dwelling’s ventilation provision. The subsequent contract required the research team to survey more than 200 new-build homes. This study found that 65% of occupiers had no interaction with their trickle vents, with the majority being kept permanently closed.4 Although the survey did not attempt to measure the effect of vent occlusion from blinds and/or curtains, such barriers would undoubtedly have an inhibiting effect on air flow in the 25% of dwellings where vents were kept open.

In addition, more than 40% of occupants reported they kept their bedroom doors permanently closed. Closing bedroom doors is entirely rational and, where this occurs, trickle vents on one window elevation are opening into what is effectively a ‘dead-end’. Without a potential exhaust, it is difficult to conceive how an opening area of 12,000mm2 could provide anything close to healthy ventilation rates; an air exchange of 120m3 (intake and exhaust) per hour being required through the slot, when a bedroom is occupied by two adults.

These studies demonstrate why current regulations are not fit for purpose. They highlight the drivers behind the acceleration in the deterioration of measured indoor air quality that is apparently, inadvertently, caused by airtight construction techniques. 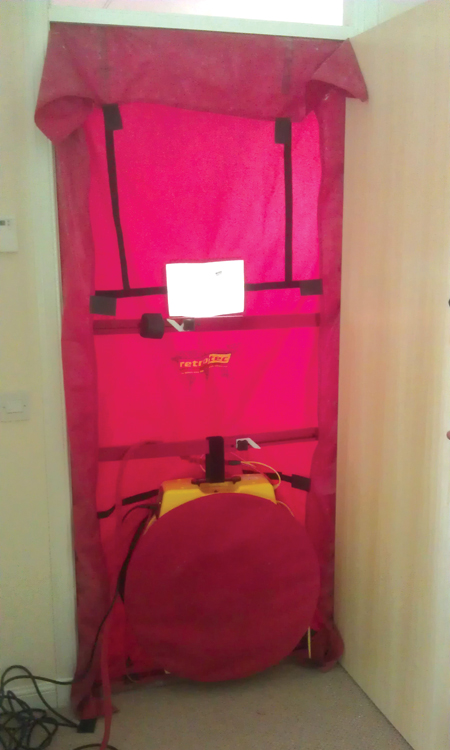 New airtight construction targets are reducing what could be perceived as historically fortuitous background ventilation rates, and this is likely to result in a more toxic indoor environment, with significant negative long-term and insidious impacts on public health.

Technical Standards should be enforced with designers and house builders required to demonstrate a planned ventilation strategy that maintains ‘healthy’ IAQ (below 1,000ppm) in all occupied rooms.

Reliance on trickle ventilators to provide background ventilation in airtight buildings should be reconsidered, with a greater emphasis placed on the planning and prediction of overall house ventilation strategies, taking into account, either solely or in combination: cross, stack, permanent, displacement and mechanical ventilation, whether positive pressure or balanced.

Monitoring or control of actual performance, for immediate feedback to occupants or mechanical systems, could be achieved by using CO2 or humidity sensors. This could include a small CO2 ‘traffic light’ installed in the living room to alert occupants when levels exceed 1,000ppm (amber) and 2,000ppm (red). This may stimulate occupants to open a window, allowing CO2 levels to equalise with external air.

This summary is based on the paper Building tight – ventilating right? How are new air tightness standards affecting indoor air quality in dwellings? by Stirling Howieson, T Sharpe and Paul Farren of the University of Strathclyde.

Napier Shaw Bronze Medals are presented to the highest rated papers of the year on research, published in CIBSE’s Building Services Engineering Research and Technology journal.