The reduction of fluorinated greenhouse gas (F-Gas) emissions is a key part of climate change policy. The F-Gas Regulation aims to cut the EU’s F-Gas emissions by two-thirds by 2030, compared with 2014 levels,1 which will mean the phasing out of many refrigerants with global warming potential (GWP).

Cambridge-based Barocal is developing a zero-GWP alternative to refrigerants that harnesses the barocaloric effect (BCE) – when materials undergo large thermal changes on application and removal of pressure – to develop cooling systems. Built on work by Dr Xavier Moya, research director and co-founder of Barocal, and his team, the company has identified organic solid materials that exhibit ‘giant’ barocaloric cooling effects when subjected to external pressures of up to 5,000bar, but, typically, less than 2,000bar.

Moya and his team have been working on the materials at the University of Cambridge, in collaboration with the Universitat de Barcelona and the Universitat Politècnica de Catalunya. Four years ago, they discovered organic barocaloric materials that produced much higher changes in temperature and thermal capacity. In 2019, Barocal was formed to commercialise the process. 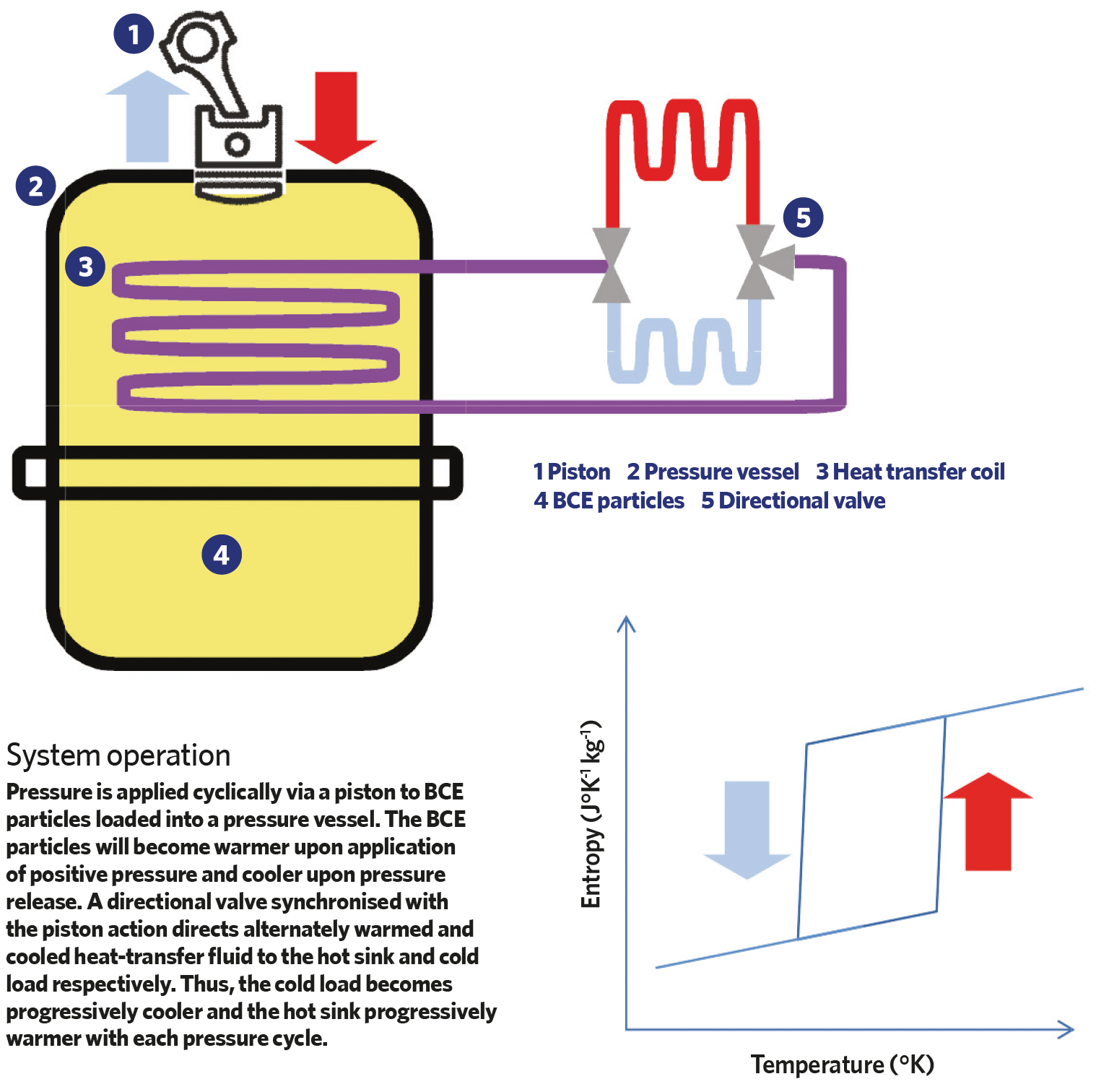 The technology uses a reversible Brayton cycle – a thermodynamic sequence that describes the workings of a constant-pressure heat engine – to provide continuous cooling using barocaloric materials. Pressure is applied to the barocaloric solid material in a pressure vessel to stimulate an increase in temperature, and a heat-transfer inert fluid is heated by the barocaloric mass to transfer the heat away. As pressure is released in the material, it cools down in a reversible manner, and this cools the heat-transfer fluid, which is used for external cooling. This cycle can be repeated to provide continuous cooling.

‘When you apply pressure, you get a phase change related to the crystalline structure of the solid,’ says Barocal co-founder and managing director William Averdieck. ‘Some of these materials have disordered, long molecular tails, and when you compress them, they become more ordered, with an associated change in energy levels.’ An analogy is when carbon is transformed into diamond by application of high pressure and temperature, says Averdieck. However, with Barocal’s materials, short-term pressure changes at ambient temperatures create phase changes.

One of the materials covered by the patent is neopentyl glycol. ‘When pressure is applied up to 5,000 bar, its crystalline structure changes. What was amazing was the change in entropy per kg, which was in the order of what you observe with gas compression cycles,’ says Averdieck.

According to Barocal, the materials can exhibit similar cooling capacities to those achieved in commercial refrigerant gases (for example, 600kJ.K-1.kg-1). The process can achieve temperature changes of between 20-40°C, depending on the pressures applied, says Barocal.

The challenge is to turn the system’s theoretical potential into a commercial solution. As well as ensuring it is safe, reliable and maintainable, Averdieck says the system needs to be energy efficient.

‘We know it’s a zero-GWP material but, ultimately, it’s also about how much electricity we use,’ he says. ‘With refrigeration, generally one third of the greenhouse gas emissions come from the refrigerant and two-thirds from the energy used. Our challenge is to develop systems that generate the necessary pressures while being economic with energy.’

Barocal’s concept has been shortlisted for the Global Cooling Prize, which includes a $200,000 award to develop a prototype. ‘We’re several years away from commercialisation, but if we show success with our technology, I’m sure we can engage with air conditioning manufacturers and open opportunities for the business to develop,’ says Averdieck.