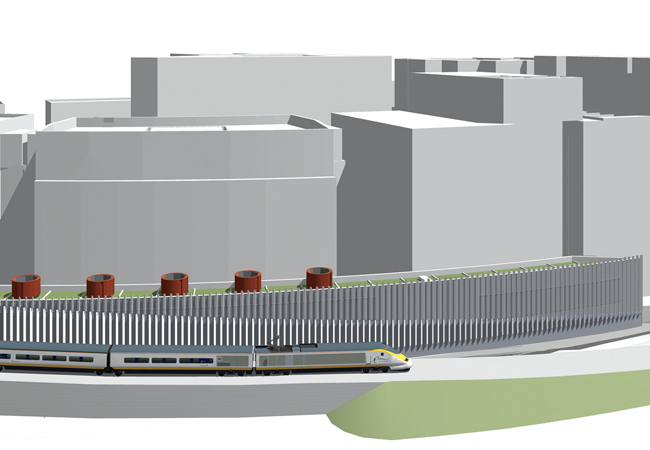 The King’s Cross cooling pod follows the curve of the nearby railway line. Credit: Allies and Morrison

District cooling is an energy-efficient way of maintaining optimal ambient temperatures inside buildings, and it is not a new technology. Systems are common in the Middle East, where year-round heat makes it an obvious choice, and they have also been implemented in Scandinavia, Germany and France. In the UK, however, there has been a lack of momentum behind district cooling – until recently. The drive for low carbon – or, in London, zero carbon – development is providing the impetus to transform this situation. Indeed, a planning stipulation for the 67-acre London King’s Cross redevelopment was the harnessing together of heat, power and cooling – or ‘tri-generation’.

The energy centre at King’s Cross that supplies district heating has been operating since 2014, and now the infrastructure for the cooling network is about to go live on the site. At the heart of Metropolitan Infrastructure’s new network is the ‘cooling pod’; housing six chillers, it will generate 9MW of cooling to the development north of Regent’s Canal. The network will serve four commercial and three residential buildings, and has been designed to allow expansion at a later date.

Cooling capacity, determined by the available energy generated by the energy centre, is 12.5MW, with an effective 9MW available – 6.5MW of which will be used for commercial cooling and 2.5MW for residential.

The profile of King’s Cross, with its high-value housing and requirement for cooling, triggered the development of the cooling pod. Argent – the developer working on behalf of the partnership – commissioned the provision of plant and the network within the development. Metropolitan worked with Argent to assess how much cooling could be produced and where this would best be used on the site (See panel: ‘How the energy company services company works’).

The site for the cooling plant was the last area to be designated in the plans. It occupies a crescent-shaped piece of land in the north of the King’s Cross development, sandwiched between an office development and the HS1 Channel Tunnel Rail Link (CTRL) – the only remaining strip of land available. The site is constrained by a CTRL fence, which separates it from the HS1 assets, a CTRL maintenance access area and offices on the Eastern side. Consequently, the Metropolitan project team faced several design, engineering and building challenges, including: designing the plant in a confined space; preventing chiller noise from disturbing office workers; and ensuring ‘pluming’ from the cooling plant did not interfere with train operation. 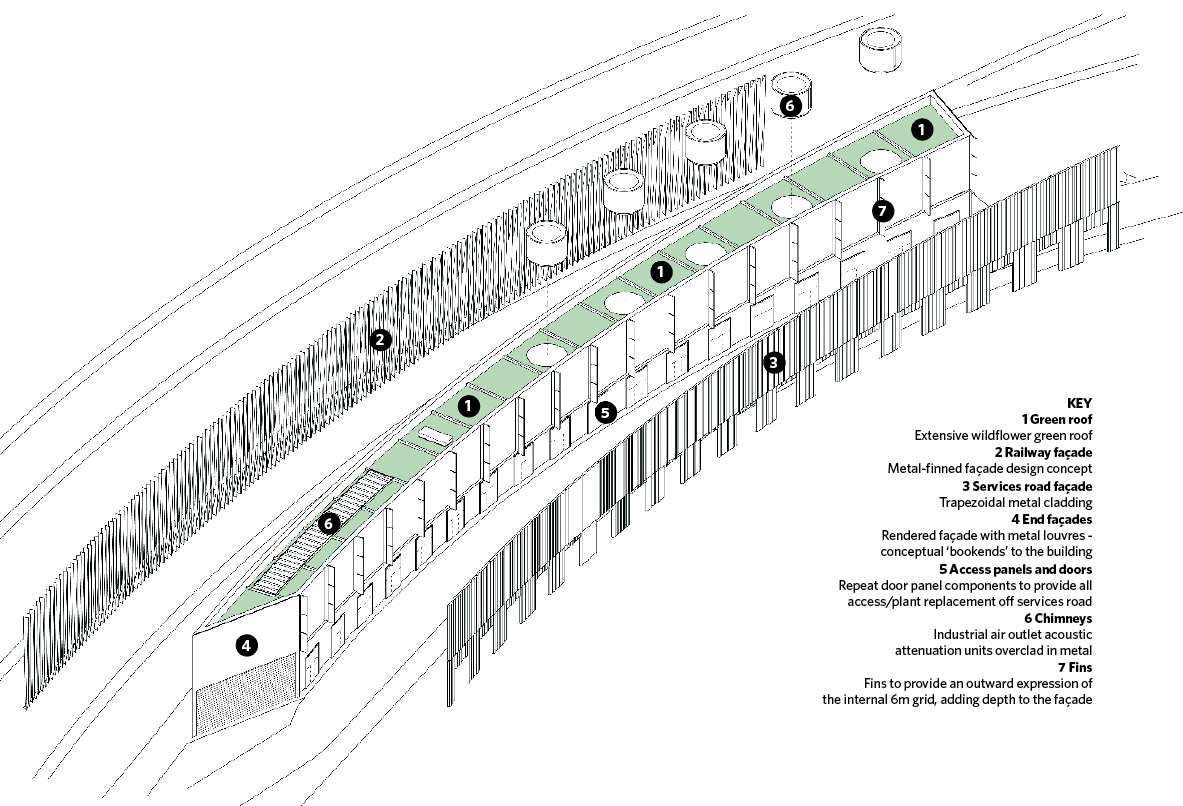 Exterior design of the cooling pod. Credit: Allies and Morrison

The pod’s proximity to the HS1 line presented a significant complication: Network Rail was concerned that ‘pluming’ would drift across the railway line and obscure train drivers’ sightlines to signals. It was agreed significant financial penalties would be imposed if trains were disrupted by pluming. Given the potential costs of failure, the final design solution eliminated this risk.

How the energy services company works

A fully managed energy services company (ESCo) is part of the solution for local delivery of district heating and cooling. Ownership of the infrastructure at King’s Cross is a long-term partnership between Metropolitan and Argent, the lead developer. Metropolitan designed and installed all of the utility, heat and cooling networks, while Argent controlled the cost and delivery programme. Metropolitan adopted the networks from Argent through a capital investment.

Argent owns the majority share in the ESCo, with the remaining share owned by Metropolitan. The ESCo owns the plant in the energy centre and cooling pod, and Metropolitan owns the heat and cooling networks, plus all other utility networks on the site. So Argent and Metropolitan will continue to have a mutual interest in the ongoing success of the development, managing customers’ needs long after construction has been completed.

To ensure the network delivers cooling even when the energy centre is working at full capacity there are three types of chiller in the system, each providing chilled water. There is one absorption, three electric and two air-chilled chillers. The absorption chiller generates chilled water when the external ambient temperature is 17°C or higher and heat is available from the combined heat and power (CHP) engines, housed in the main energy centre. Absorption chillers use hot water to generate chilled water via a chemical process, so they can operate when the CHPs are supplying heat in the summer months and generating electricity.

Tri-generation is a cost- and carbon-efficient way of producing electricity and chilled water. The temperature threshold for using the absorption chiller is set at 17°C; below this, there is a risk of pluming.

When the absorption chiller is not able to fulfil the entire cooling demand, and the ambient air temperature is higher than 17°C, water-cooled, electric, vapour-compressed chillers will generate chilled water. The electric chillers on the ground floor reject heat using water evaporation into the atmosphere via five open-circuit cooling towers on the first floor of the pod. These towers will not be operated when the ambient temperature is lower than 17°C, because pluming from the evaporated water could occur. Finally, two air-cooled chillers will generate chilled water when the external ambient temperature is below 17°C. These chillers reject heat by blowing ambient air over the condensers, which reduces the risk of pluming but is less energy efficient.

To mitigate noise from the plant and avoid disturbing the occupants of nearby offices, the air-cooled chillers and the cooling towers have acoustic air-intake louvres, acoustic shrouds and roof-mounted acoustic cylinders. The water-cooled electric chillers, meanwhile, are in acoustically treated bays.

“The electric chillers on the ground floor reject heat using water evaporation into the atmosphere via five, open-circuit cooling towers”

Chilled water is pumped from the cooling pod via underground, pre-insulated Logstor Series 1 pipework, with an internal diameter of 450mm and an external diameter of 560mm. Its primary flow and return temperatures are 6°C and 12°C respectively. Within each building served, the primary cooling network terminates at a primary plate heat exchanger, which offers a hydraulic break between the primary and secondary networks, as well as a bulk-metering point. Services design engineers are responsible for designing the secondary cooling network within each building, subject to Metropolitan’s requirement of a secondary cooling temperature of 8°C flow and 14°C return.

The cooling system is controlled by a building management system designed to meet the specific requirements of the cooling pod and to manage the appropriate deployment of each type of chiller. The control system is open protocol, to allow operation alongside the energy centre, and offers local and remote communications. This ensures maintenance teams are fully aware of plant condition and operation.

The King’s Cross scheme has delivered higher-than-planned heat-generation efficiencies, achieving a CHP Quality Assurance Certificate with a QI score of 116.46, which is 10 points above the expected level. CHP Quality Assurance is a government initiative that monitors energy efficiency and environmental performance. 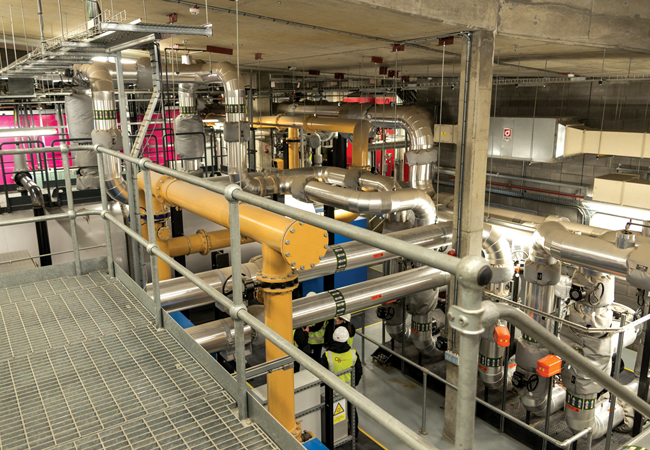 A centralised cooling system servicing a building removes the need to install and manage discrete systems, resulting in capital and space savings. It also enables the building to achieve a higher Breeam rating, and running costs are expected to be lower.

Residential customers of the district heating network at King’s Cross are protected by the scheme’s membership of the Heat Trust, an industry-led, self-regulatory initiative that recognises best practice. Although there is currently no code of practice for cooling networks, stringent tests during the commissioning phase ensure the cooling pod performs as designed. Each major piece of plant is tested and commissioned individually, then proven again under the requirements of the energy control system.

The benefit to those living and working nearby is that they have an aesthetically striking building on their doorstep, which also gives rail rail travellers from Europe a stunning first impression of the King’s Cross development. CJ 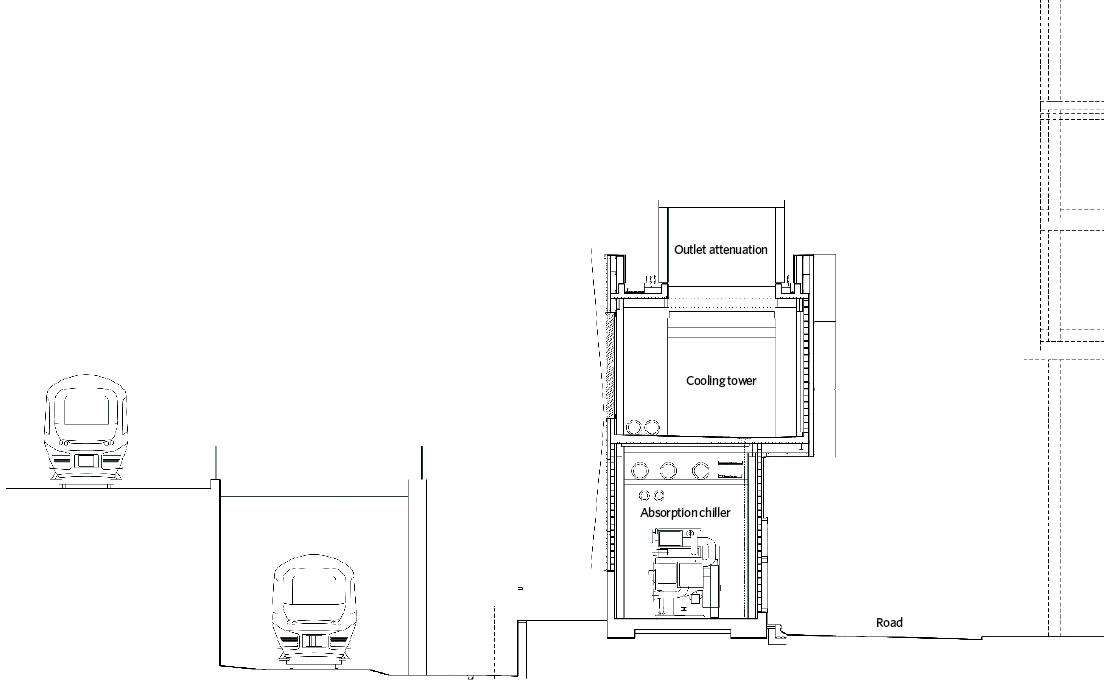