Aberdeen City Council wanted its new exhibition and conference centre to be the most sustainable venue of its type in the UK. As a flagship project, it was essential that the energy strategy for The Event Complex Aberdeen (TECA) – now officially named P&J Live, courtesy of naming rights partner DC Thompson Media – embodied the city’s Sustainable Energy Action Plan.

There were also sound commercial reasons for it to do so: a low carbon footprint is increasingly seen as a critical component in attracting and retaining events at exhibition and conference facilities. The council’s brief to its development partner, Henry Boot Developments, was for a ‘zero carbon’ facility.

By its very nature, an exhibition and conference centre has an extreme energy-load profile. There is a peak load during an event, which drops to almost nothing between events. Unfortunately, it is not a load profile that typically lends itself to the application of renewable technologies. Moreover, the site is located close to Aberdeen airport, so there are restrictions on the use of large photovoltaic arrays, and severe restrictions on the height and location of wind turbines.

Visualisation of the 15,000-capacity arena

‘We looked at the constraints of the site; wind and solar were not an option, so we had to figure out how best to develop an energy strategy,’ says Dr David Telford, director, energy and sustainability, at HDR | Hurley Palmer Flatt.

The consultant’s solution is innovative and impressive in its ambition. It has developed what it terms an ‘energy eco-system’ to serve the exhibition and conference centre and two accompanying hotels, constructed adjacent to the facility.

The eco-system’s two principal components on the site are an anaerobic digestion (AD) plant and a combined cooling, heating and power (CCHP) generation plant, which is housed in the energy centre.

The AD plant takes food waste, agricultural waste and crops to produce a renewable biogas, which is then upgraded and cleaned by removing the CO2, moisture and impurities to turn it into bio-methane for injection into the gas grid. ‘The council had been looking at AD for food waste, but there was insufficient waste to make this viable, so we suggested co-fuelling the plant using crops,’ explains Telford. This solution ensures the digesters can provide enough gas to meet the total annual energy demand of TECA.

A dedicated combined heat and power (CHP) unit provides heat and power to operate the primary and secondary digesters and the gas upgrade equipment. The digestate remaining after AD is returned to the soil as a conditioner, completing the cycle.

Gas output from the AD plant is injected into the mains gas grid. It is an arrangement that enables the gas grid to be used as a fuel store, effectively, and enables the digesters to continue to digest, even when there is a low gas demand from TECA including its associated hotels. ‘We are injecting green gas into the Grid and taking green gas out of the Grid, so, effectively, we’re using the grid for storage,’ says Telford. There is also a bio-methane supply – sized to meet base load conditions – direct to the energy centre building next to the main arena.

The energy centre is also connected to the electricity grid, to add resilience and ensure sufficient power is always available to meet peak demand. At times of low demand, excess electricity is diverted to onsite hydrogen electrolysers and their associated compressors, to produce high-grade hydrogen fuel, which is used to power Aberdeen’s bus fleet. When the hydrogen store is full, electrical power is exported to the grid.

With so many different, complementary technologies available, a major challenge was to develop a control philosophy to ensure the heating, cooling and power demands of TECA, including the hotels, are met. In addition to ensuring loads are met, the philosophy had to enable the various low carbon technologies to operate efficiently and effectively, to generate maximum possible revenue from the sale of heat, cooling, power and hydrogen.

‘For the overall viability of the scheme, the whole technology mix had to achieve a reasonable financial payback,’ says Telford. 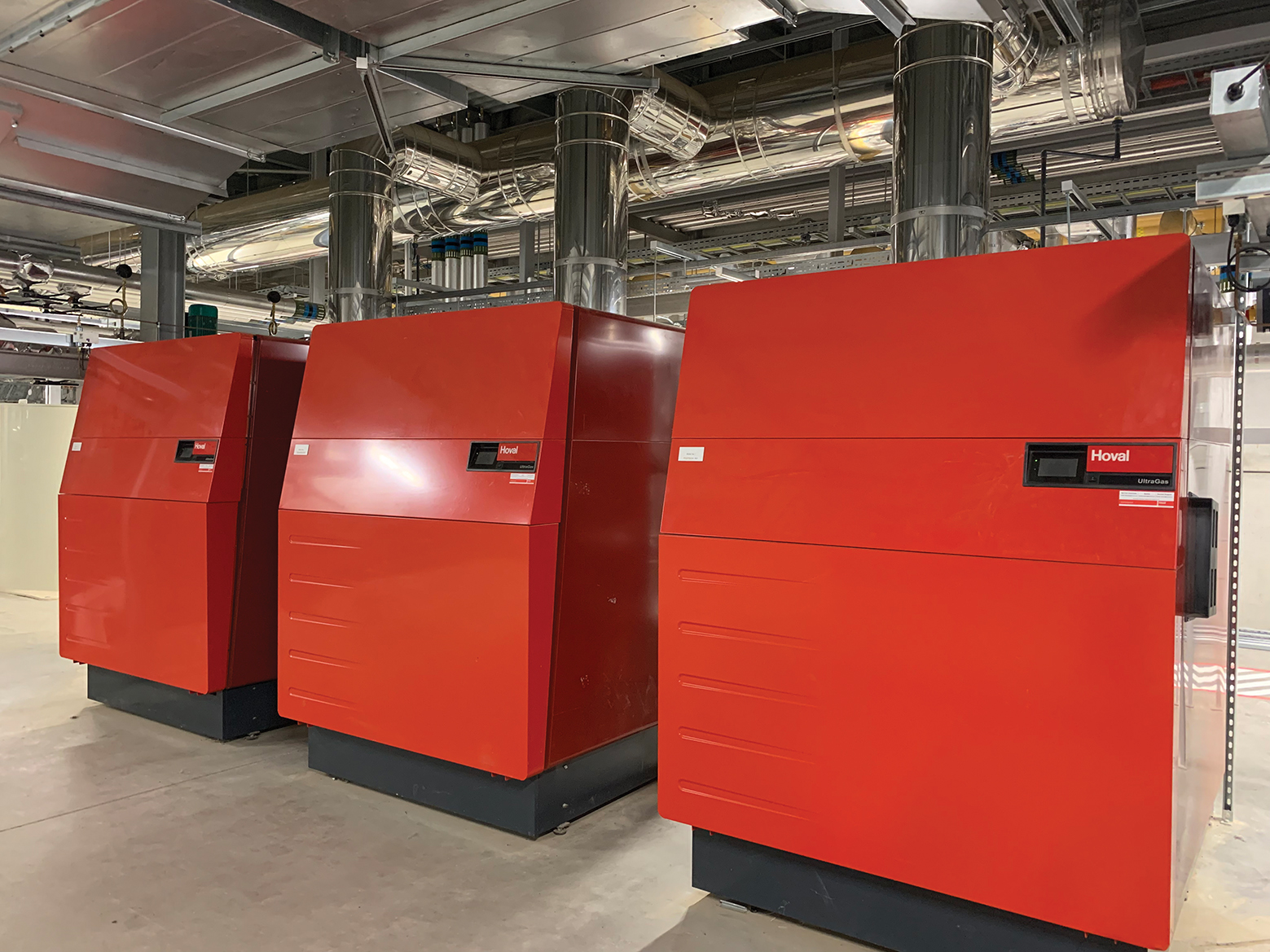 To devise the optimal control solution, HDR | Hurley Palmer Flatt teamed up with the University of Strathclyde’s Energy Systems Research Unit (ESRU) under an Innovate UK-funded Knowledge Transfer Partnership (KTP). The project set out to develop an integrated suite of software tools to model and test hybrid energy centres against a range of demand profiles. The TECA project was used as a case study for the KTP, which received a B rating of ‘very good’. ‘We worked closely with academia to expand on the skills we already had in the office,’ says Mark Arthur, mechanical, director at HDR | Hurley Palmer Flatt.

The team was helped in its modelling by demand profiles provided by the original Aberdeen Exhibition and Conference Centre, which TECA has been built to replace. The team also sat down with TECA’s operators to discuss how they planned to use the facility – and which of the event and conference spaces were likely to be in use simultaneously – to build a predictive demand-side model. The modelling enabled the design team to test different operational scenarios, optimise plant sizing, and test the sequencing of different items of plant to best match its dynamic energy demand with supply.

‘New modelling techniques were developed to model the performance of the energy centre systems, enabling it to be reviewed at sub-hourly intervals across an entire year of operation, to optimise system performance,’ says Emma MacLeod, associate director at HDR | Hurley Palmer Flatt. (The control philosophy is described in ‘Control mission’.) 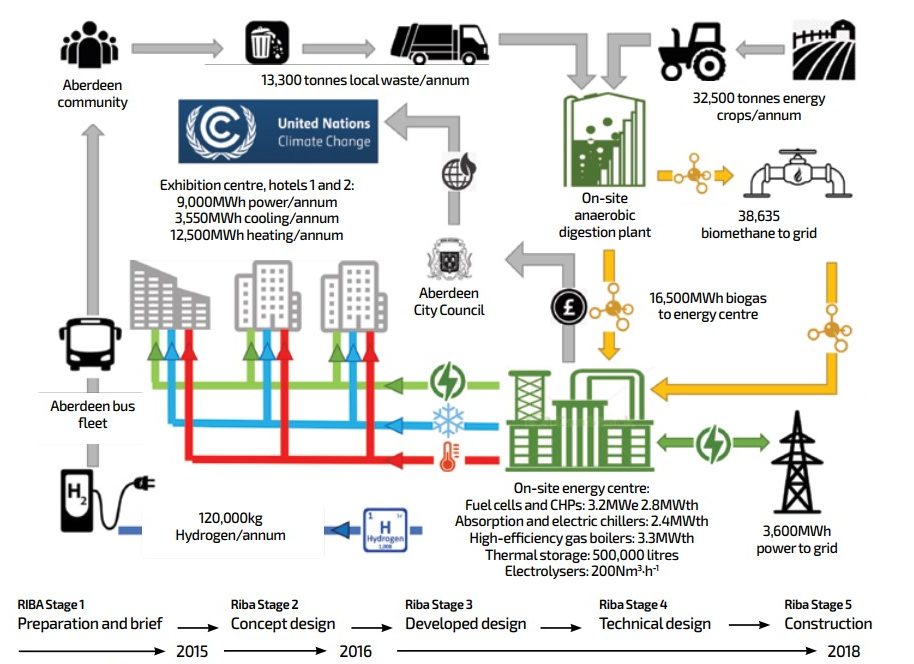 In addition to sizing the plant and devising the optimum control strategy for the development, the design consultant was appointed to carry out the detailed design for the energy centre using Revit modelling. ‘We’ve done everything from RIBA stage 1 “preparation and brief” to RIBA Stages 3 and 4, the “developed” and “technical design”; we even prepared the tender documentation for the FM contract under RIBA stages 6 and 7; “handover and close out” and “in use”,’ says Arthur.

TECA opened in August 2019 and, appropriately for an exhibition centre, the innovative energy eco-system is itself on show. The city council is using the scheme as a demonstration facility to showcase Aberdeen as a ‘world class’ centre of excellence for the global energy industry of the future – and with its new arena, exhibition and conference centre achieving net-zero carbon, the city is off to a great start.

Power is generated by fuel cells and CHP combustion engines. 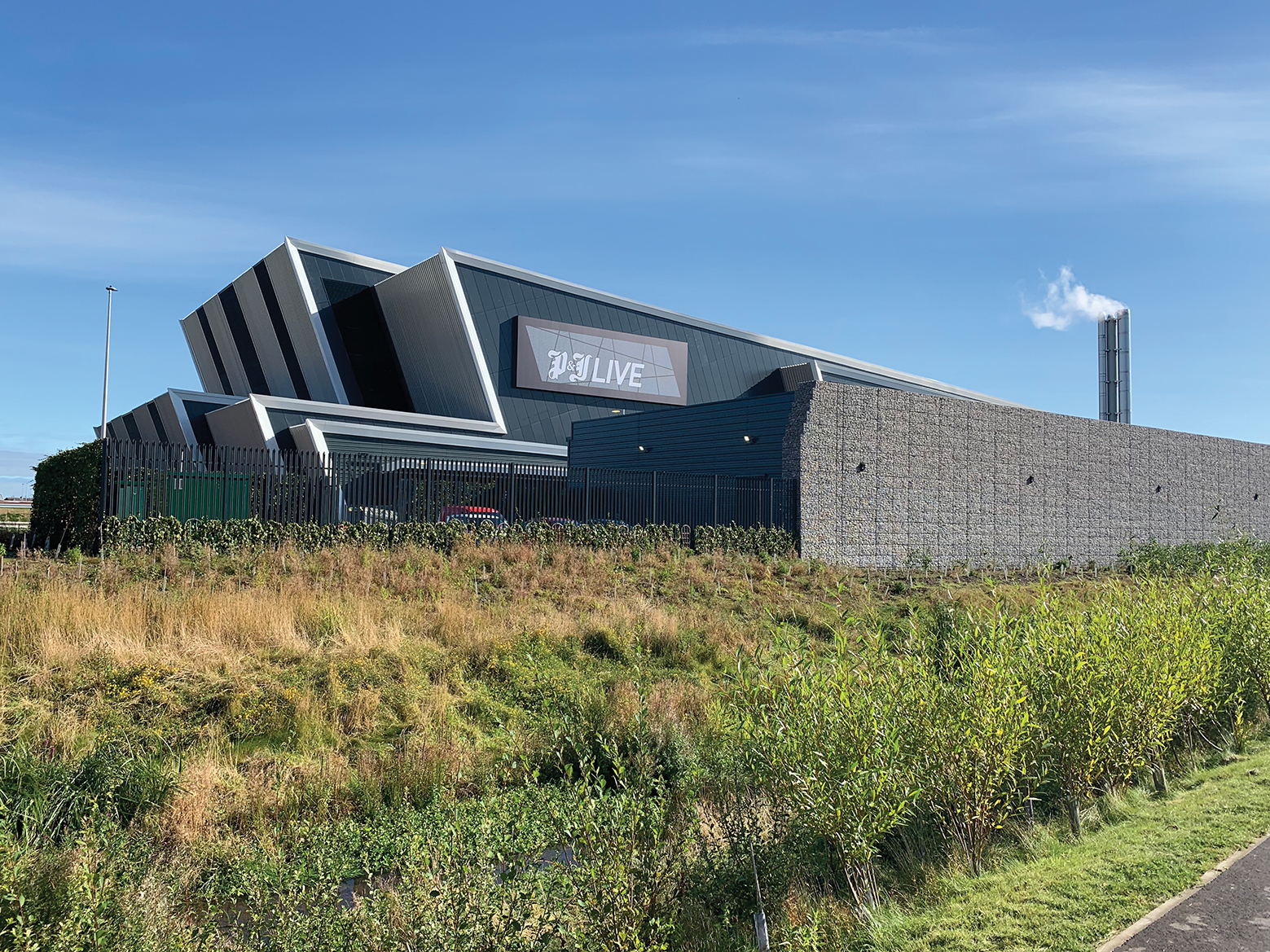