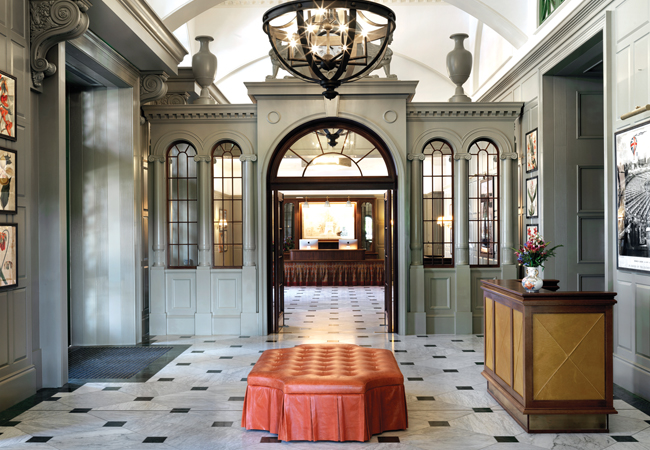 The University Arms Hotel in Cambridge opened in 1834 as the city’s first hotel. Since then, it has undergone extensive redevelopments in 1891, 1900, 1925 and, finally, in the 1960s, when the original Regency section along Regent Street was demolished and replaced with a discordant structure typical of the period.

The hotel has now reopened after an £80m transformation, which combined a complex heat recovery retrofit with a sympathetic restoration scheme.

The redevelopment is a collaboration between architect John Simpson – who oversaw the replacement of the 1960s extension – and interior designer Martin Brudnizki.

The process of designing the ventilation strategy for the hotel began in 2013 and the final design was completed by Johns Slater & Haward engineer Colin Bowen in 2016.

“Getting ductwork to 192 bedrooms through limited ceiling voids across levels that do not line up laterally, and down risers that did not stack vertically, was complicated

The overriding intention of the M&E design was to make significant improvements to the energy efficiency of the existing building fabric – a challenge considering much of the façade and the original floor levels had been retained, bringing with them the usual problems associated with older buildings.

The importance of indoor air quality in delivering high levels of occupant comfort, including a good night’s sleep, led the design team to introduce mechanical supply and extract ventilation with heat recovery to every bedroom. 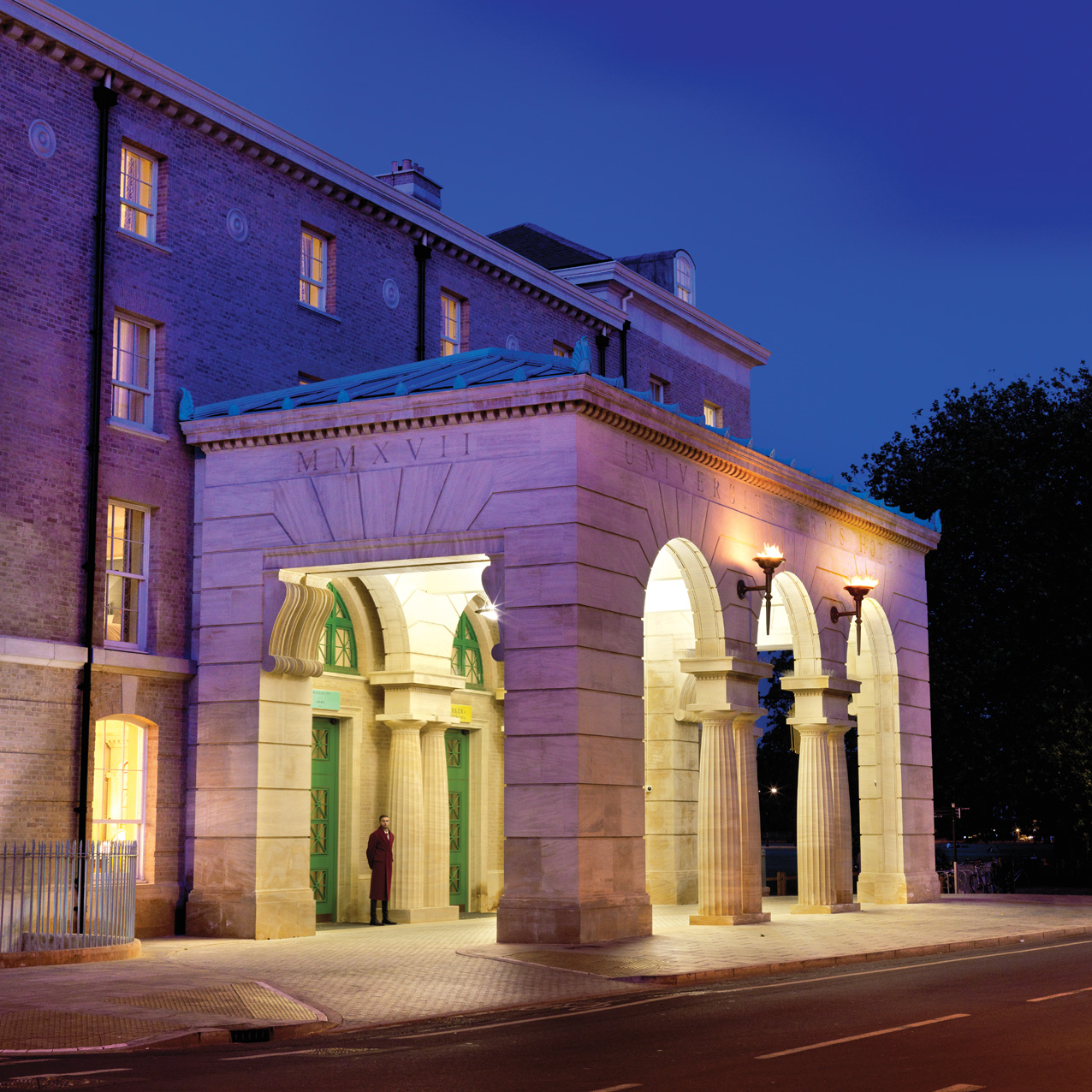 Retrofitting a full heat recovery system presented a complex range of challenges. Getting ductwork to 192 bedrooms through limited ceiling voids across levels that do not line up laterally, and down risers that do not stack vertically, was complicated enough, but connecting the VRV refrigerant pipework to 192 fan coil units and the usual water system pipework – made complicated seem impossible.

Bowen opted for a central plant solution and turned to Nuaire for help in designing the air handling units (AHUs).

Every dimension on the roof was constrained. In plan view, the available roof space was restricted to a small plant area above the new-build section, with much of the early roofline protected by planning, including the iconic copper turrets. The height dimension was equally pressured as the new roofline is visible from Parker’s Piece, Cambridge’s historic park, and planning restricted the visibility of plant equipment.

Two bespoke AHUs, serving a total of 4.4m3.s-1 of fresh filtered air to the bedrooms, split west and east, were used. Thermal wheels were used to provide the heat recovery mechanism, and purge sectors were applied to prevent cross-contamination of exhaust air onto the supply. 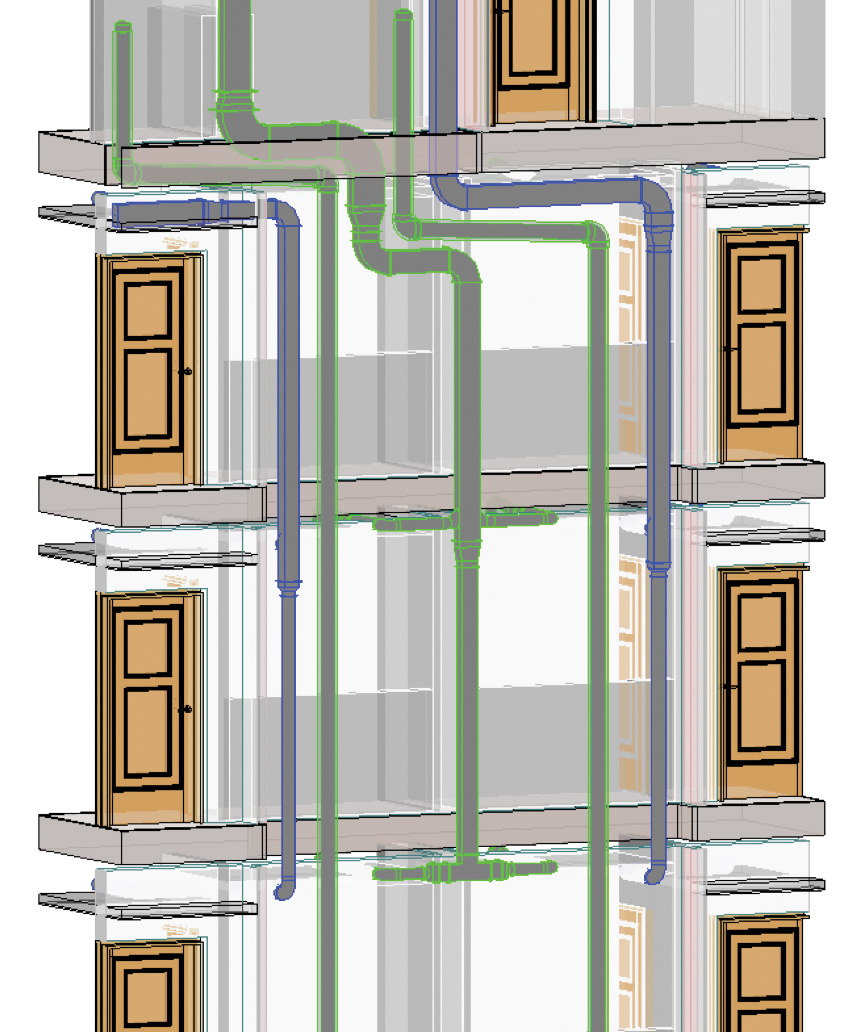 The design team worked in millimetre intervals to squeeze the maximum air volume out of each AHU, the largest of which has a supply and extract rate of 2.9m3.s-1 with a unit height of just 2,222 mm.

Johns Slater & Haward designed an innovative ductwork solution to avoid ‘crossovers’, protecting the corridor ceiling heights, an architecturally stunning feature. Splitting the supply air into two smaller ducts running either side of a larger central extract duct allowed the extract connections to pass over the supply, eliminating the need to cross large ducts.

This unlocked many other engineering challenges, allowing the design team to think laterally. By separating ventilation ducts and other services onto alternating floors, space was created for the water pipes and refrigerant connections.

A void containing air conditioning pipes and wet services on one floor, serving ‘above and below’, meant the next floor up had a free void for ventilation ducts, again serving the upper and lower levels. This pattern was repeated on the next two storeys creating alternate layers of vent ducts or pipes.

The challenge with any central plant solution – especially one as complicated as this – is routing and concealing the large distribution ducts serving the many risers. The decision was taken to raise the existing roof level to the highly sensitive Parker’s Piece elevation to accommodate the lateral run. This move, coupled with the compact unit design, helped conceal all plant services from sight, and preserve the visual detail of the eastern façade.

A former winner of the CIBSE Energy-Saving Product of the Year, the manufacturer’s heat recovery units were selected to serve the other public spaces, including the library and bar areas, ensuring energy efficiency was protected throughout the building.

The low breakout noise units safeguarded the acoustically sensitive bedrooms located near to the lightwells, in which they were installed. Here, controls were deployed to ensure the lowest possible energy consumption by linking air volumes directly to occupancy – or indoor air quality – demands.

The extract fans, serving the main – and finishing kitchen – areas, were vertically mounted in a faux chimney stack, constructed in the lightwell, terminating in roof level vents disguised as chimney pots.

The architectural design, beautiful interiors and elegant solutions to the complex engineering challenges presented by this iconic building refurbishment make this one of the most interesting and rewarding projects to have worked on.

On 18 May, the government announced its Fire Reform White Paper, which is intended to strengthen the fire service and introduces new requirements for…