The Cambridge Central Mosque has been badged by the media as Europe’s first ‘eco-mosque’ and ‘the greenest mosque in Europe’. It’s easy to see why: the building is designed to be naturally lit during the day and naturally ventilated throughout the year, while its visually impressive timber columns helped minimise embodied energy in the building’s structure.

Perhaps more impressively, its eco-credentials did not result from a detailed sustainability brief from the client – they are simply the result of good engineering. ‘There was no defined eco-brief as such; we work with Marks Barfield Architects a lot and we always strive to develop sustainable solutions,’ says Mark Maidment, director of the project’s building services engineer Skelly & Couch.

The mosque, which opened its doors to worshippers in May, is certainly impressive. It comprises a long, mainly single-storey building that occupies a rectangular site in a predominantly residential area of Cambridge. Visitors enter the building after passing through a formal garden with trees and a water feature facing onto the busy Mill Road. They then pass beneath a giant entrance canopy supported on four tree-like timber columns, each of which is lit from above by a large, glazed oculus, before entering through a row of glass doors set into a glazed façade. 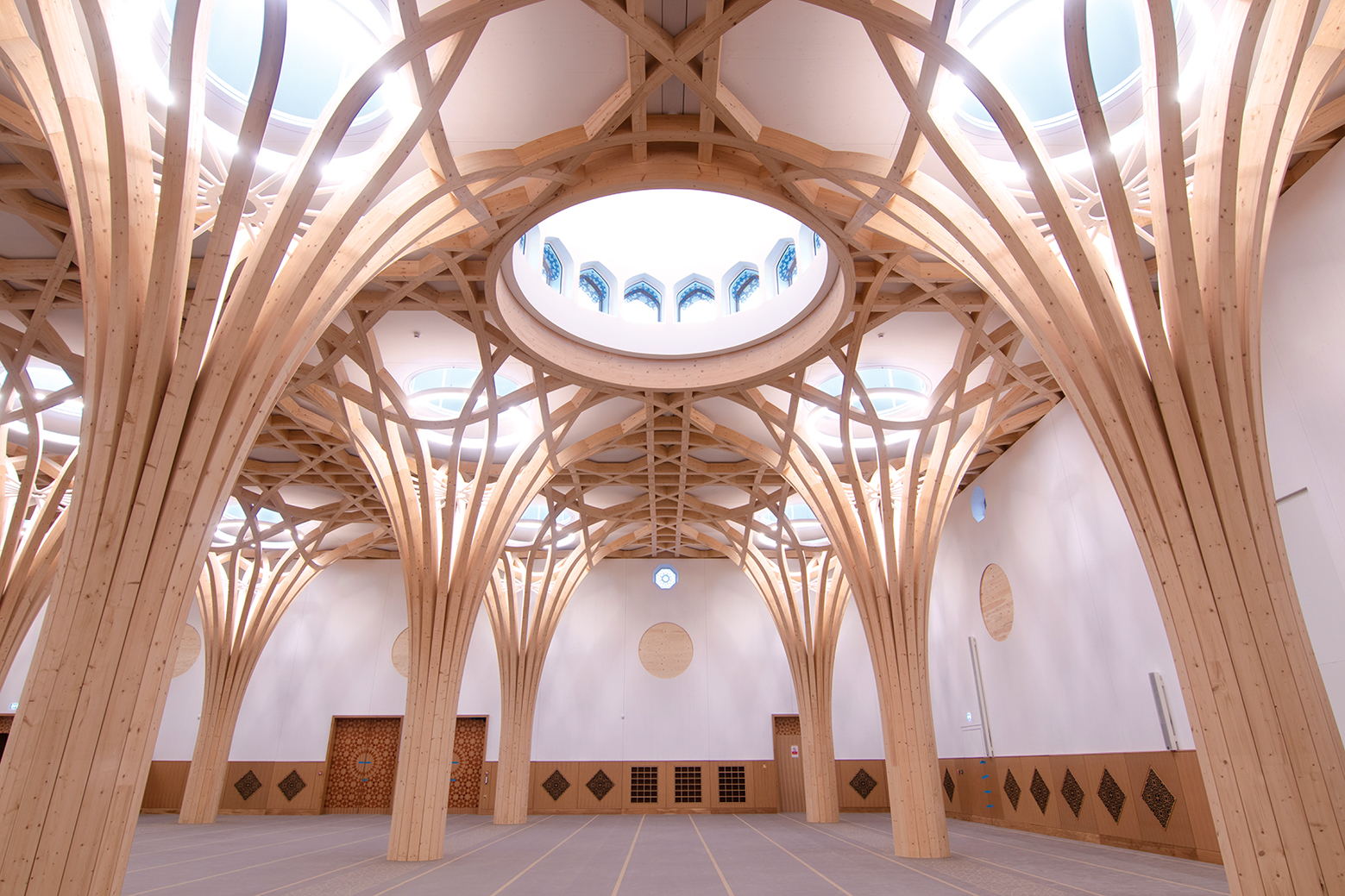 The prayer hall has space for 1,000 worshippers. Credit: Abdallah Abada

Inside, visitors are greeted by a large day-lit atrium featuring four more timber piers, off which doors lead to a cafe on one side of the space and an educational area on the other. From this space they pass through a lobby housing the toilets and wash areas for ritual ablutions. After this, visitors enter the most important space of all – the giant 30m by 30m prayer hall, with its 8m-high roof supported on a forest of timber columns, which has space for up to 1,000 worshippers.

The circular timber supports are the space’s most striking feature. Each is formed from a ring of perpendicular ribs, which open outwards, branch-like, as they rise upwards from the worshippers to form an intricate ribbed timber vault that supports the roof.

As with the entrance canopy, each ‘tree’ is lit from above by a large, circular roof light. The roof lights ensure a light level of approximately 150-200 lux is maintained within the prayer hall. ‘We did not want direct sunlight in the space, so the roof lights have a deep reveal,’ says Maidment. ‘Our daylight studies show that there is no need for artificial lighting in any of the spaces during daylight hours,’ he adds. 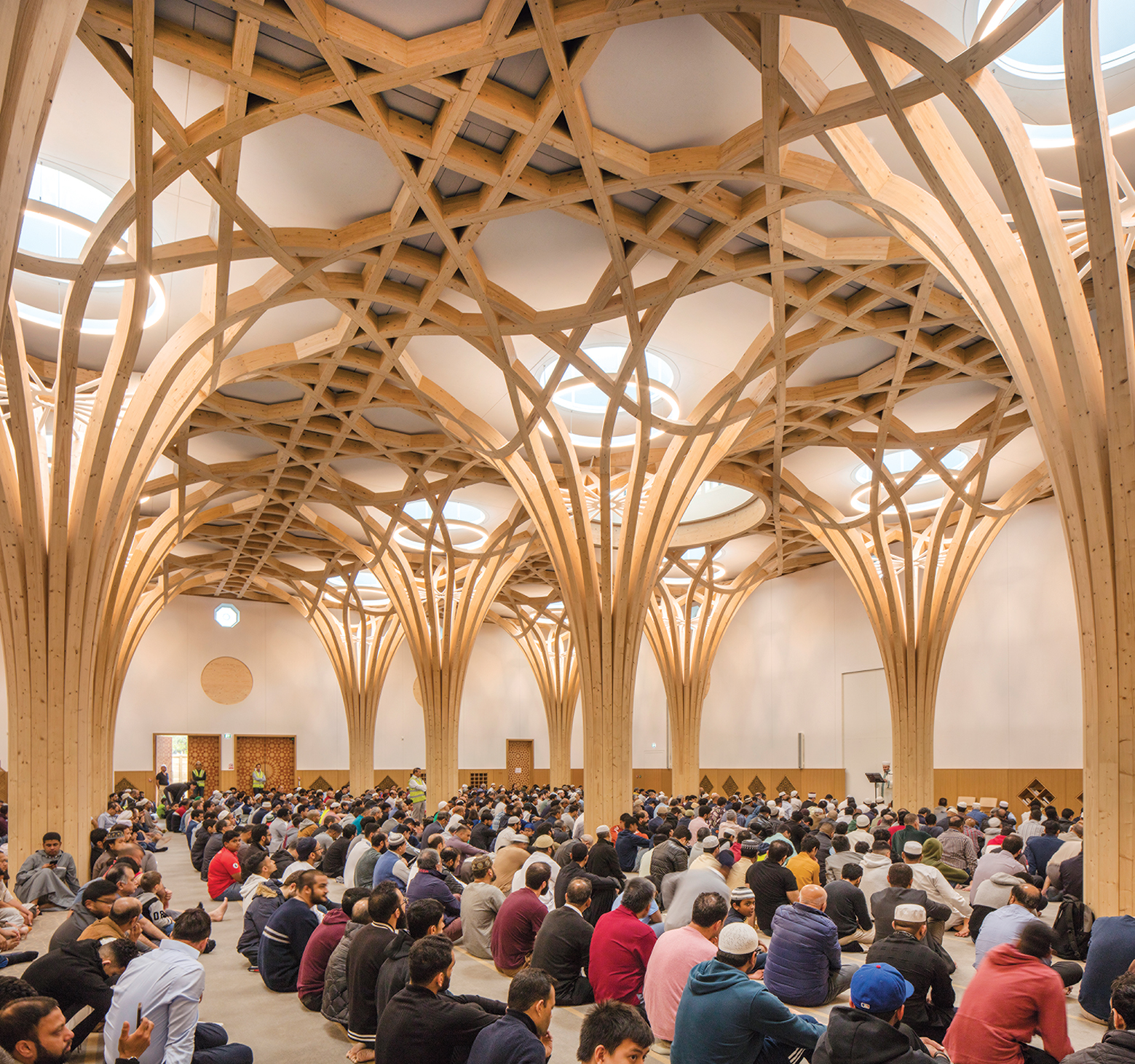 Each of the roof lights is ringed by a bespoke circular LED light fitting, so at night light will still filter down through the piers’ timber branches. The warm-white LEDs will dim according to the amount of daylight entering the building. ‘Lighting is always from above,’ says Maidment.

In addition to the timber columns, Marks Barfield’s low-embodied-energy design has walls constructed from timber cassettes and clad in brick slips, with a lightweight, timber roof structure. ‘We spent a huge amount of time at the start of the project developing the rooflight design and advising on thermal performance, which ended up being a very well insulated, lightweight, timber structure,’ explains Maidment. The timber superstructure sits on a giant, concrete box housing the mosque’s subterranean car park – a necessity in the congested neighbourhood.

‘When we were first involved with this project about nine years ago, we initially thought it would be good to use the thermal mass of the car park, combined with a mechanical ventilation system, to maintain comfortable conditions within the building,’ says Maidment. ‘However, this solution started to get pretty complicated; so when the project paused, we took a step back and decided to make this really, really simple by exploiting the volumes of the spaces in the building to take advantage of a natural ventilation solution.’ 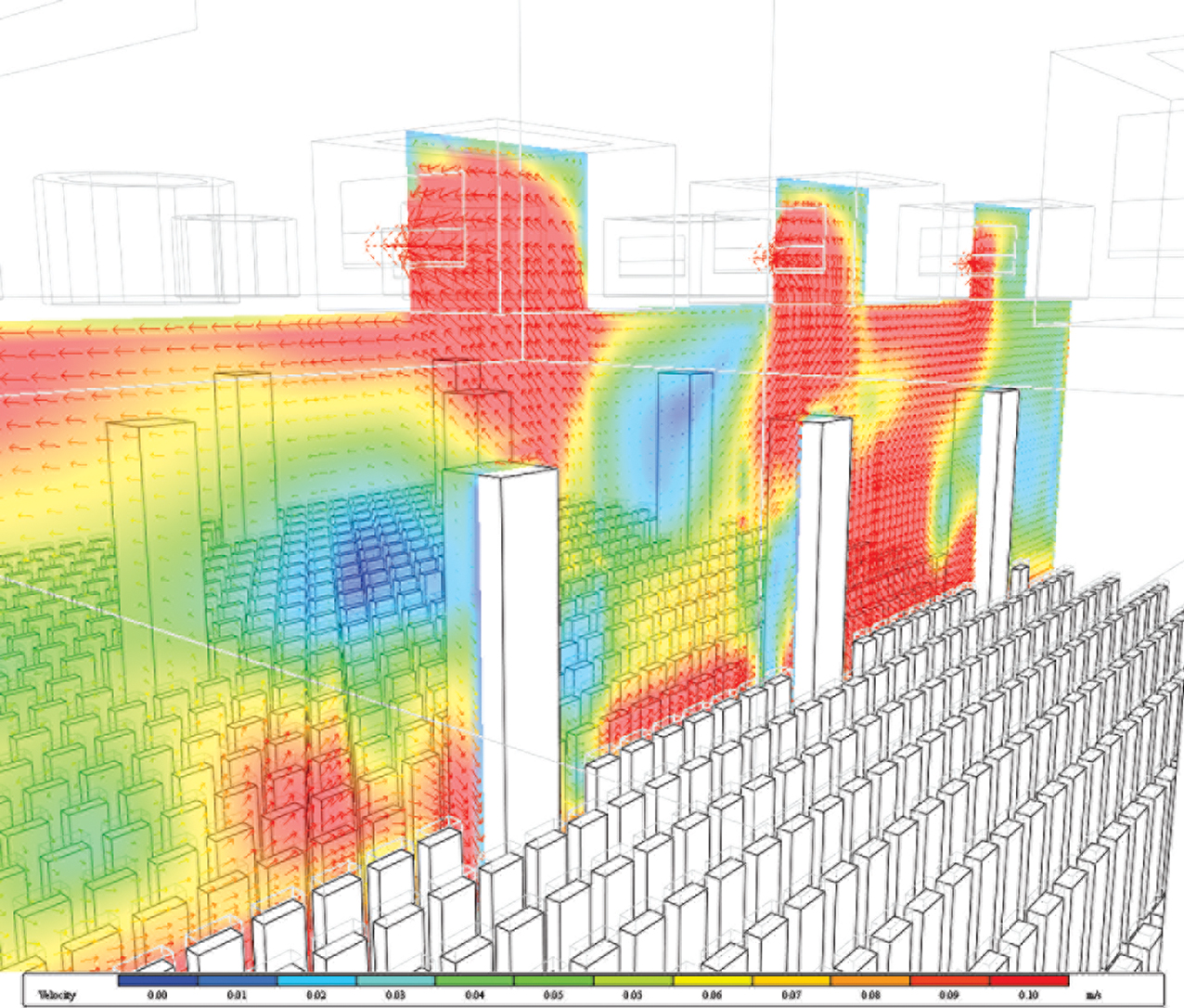 It is ostensibly a simple solution, but not one that those funding the mosque’s construction were comfortable with initially. ‘When we said we were going for natural ventilation we had a lot of explaining to do, because air conditioning is the norm for new mosques in the Middle East so we had to prove to the funders that our natural ventilation solution would work,’ says Maidment. ‘We did a lot of CFD modelling, which showed that it could get quite hot but that there would be quite a lot of air moving over the congregation, which would keep them comfortable; and the more people present in the prayer hall, the higher the volume of air drawn through.’

Fresh air is drawn into all of the mosque’s principal spaces at low level through large, square grilles (both inside and out) featuring an Islam-inspired design. The grilles are set into the walls, and in the prayer hall, where up to 1,000 worshippers can be present, grilles have been incorporated into all four of its walls. ‘We had no involvement with the pattern, but we did insist that the grilles had a least 50% free-area to ensure a low air resistance,’ says Maidment.

The most challenging aspect of designing the ventilation system for the mosque is its variable occupancy. ‘To develop an appropriate design solution, we had to understand how the mosque would be used,’ Maidment explains. ‘The thing that struck me most was its very sporadic use pattern: the building is pretty much empty now [at 3pm on a Friday] but, two hours ago, there would have been around 1,000 people in the prayer hall, which means an additional heat load of up to 100kW; at other prayer times there may only be around 50 people.’

To accommodate these extreme occupancy variations, each air intake incorporates a motorised damper to control the volume of air entering the building. Rooms incorporate both temperature and CO2 sensors. ‘The primary control is temperature; we’ve dropped the set point to 18oC so that when the occupancy level starts to rise the dampers open up pretty quickly, which means that CO2 levels never get very high,’ says Maidment.

The air intakes also incorporate an acoustic louvre. In part, this stops external noise entering the place of worship, but it also helps prevent noise break-out disturbing the mosque’s neighbours.

Unusually, some of the intake vents also incorporate smoke dampers. This is because the footprint of the mosque occupies almost the entire site, so the external fire escape routes to allow worshippers exiting from the rear of the building to make their way to the street in front, pass several intake grilles. The smoke dampers close to prevent smoke escaping from the building and clouding the fire escape route. 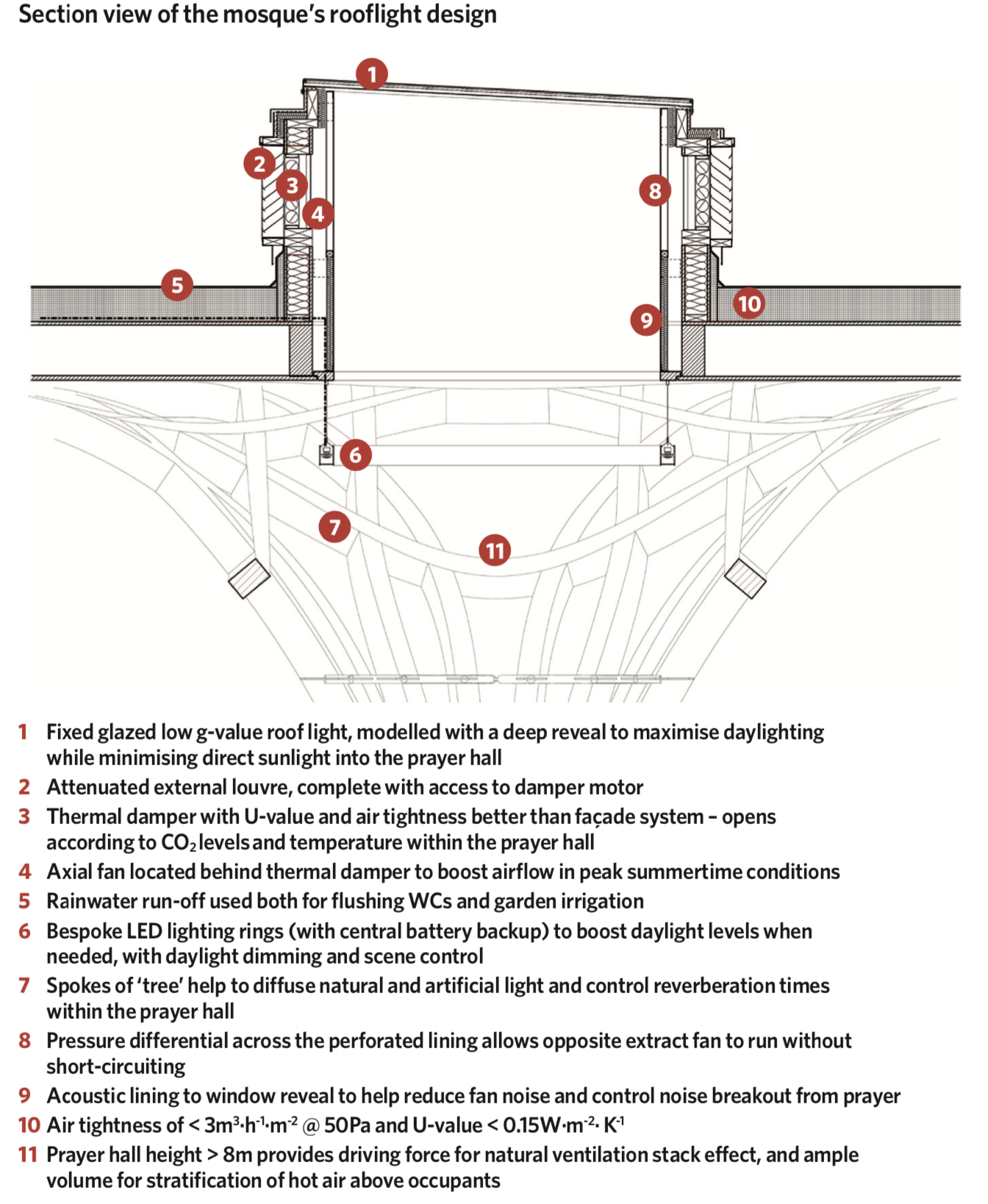 Warmed air rises up and out of the building through louvres incorporated into the reveals of circular roof lights. As with the air intakes, the air exhausts include an acoustic attenuator; unlike the intakes, the exhausts also incorporate an extract fan.

‘Common to each roof light is a louvre with a fan behind it that will run when the room temperature gets very hot,’ says Maidment. The fans can also be operated using a manual override, although Maidment does not expect this to have to be used: ‘The mosque part of the building takes care of itself most of the time because of its big volume spaces, which generally just need a bit of heat in winter,’ he explains.

An underfloor heating and cooling system helps keep the worshippers comfortable throughout the year. Two roof-mounted, air source heat pumps supply the system with heat and coolth, via buffer vessels housed in the basement plant room. ‘They are operating at a coefficient of performance of more than four, which is good for an air source heat pump,’ says Maidment. ‘With grid electricity becoming increasingly less carbon intensive, the mosque’s overall carbon footprint will reduce year on year.’

To ensure comfort is maintained in the prayer hall, the room features a bespoke carpet featuring a lined pattern to help position worshippers. ‘It was very important for this carpet to have a low tog-value so that worshippers get the benefit of the slab heating and cooling,’ says Maidment. 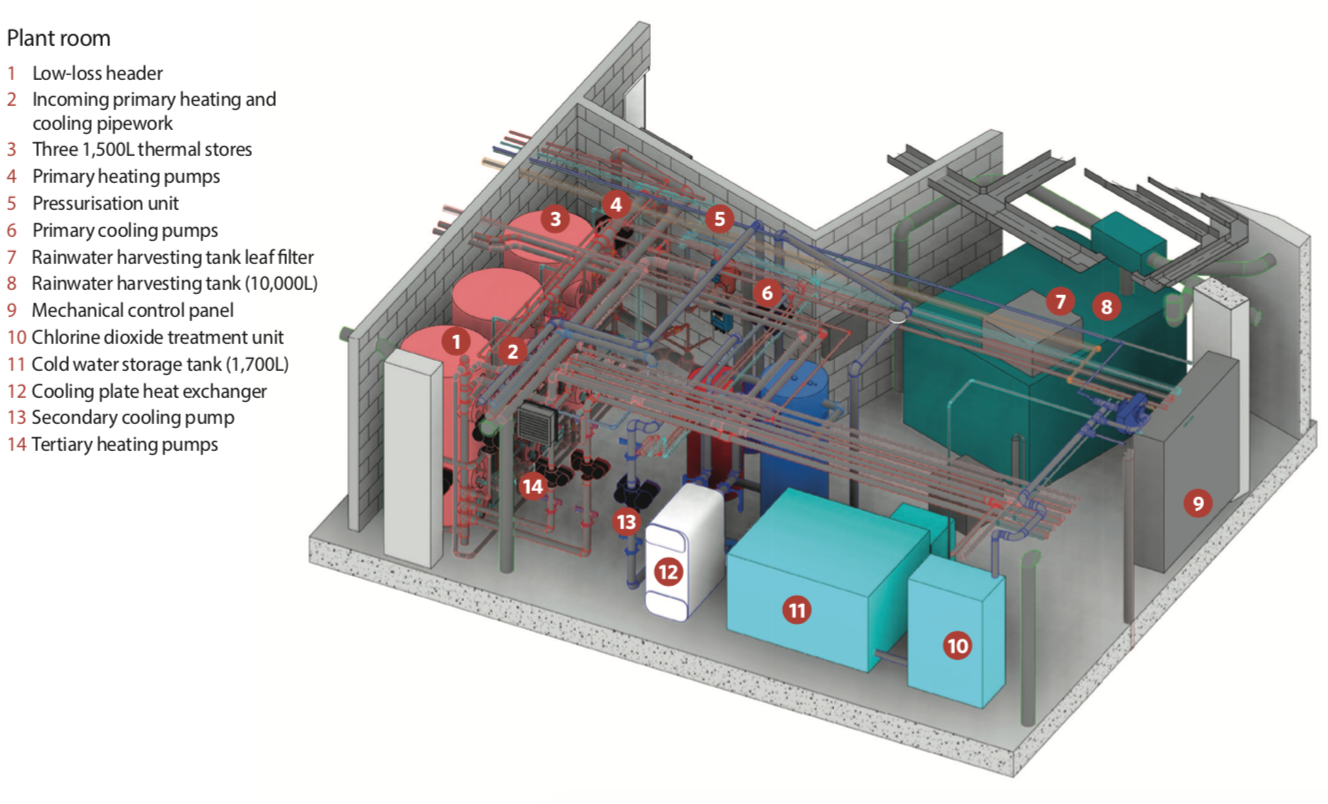 Since there is no gas on site, the heat pumps are used to provide hot water. ‘There is quite a big hot water demand, with up to 1,000 people washing in a short space of time,’ Maidment explains. Skelly & Couch’s solution has been to create an innovative direct hot water heater, by connecting the cold water main to heat exchangers placed inside the underfloor heating buffer vessels.

‘It is similar to the way water is heated in a combi boiler,’ says Maidment. ‘In winter it is a very efficient way of heating the water, because you’d have to heat the building anyway. In summer it’s not so efficient, but then we’d still have to heat up a large quantity of domestic hot water in any case,’ he adds.

The water supply is treated by dosing with chlorine dioxide (see box ‘A dose of wisdom’). ‘It’s quite an unusual solution, but it means that we don’t have to elevate the water temperature from the heat pumps above 55oC [to prevent legionella],’ says Maidment. ‘The water is perfectly fine to drink, and it means that because there is a lot of sprayed water in the ablution areas there are no concerns about legionella,’ he adds.

The large quantity of hot water is required for ritual washing before prayer, and the mosque’s toilets feature extensive ablution spaces for worshippers. The facilities include ablutionary showers or douches on a flexible hose. These require adequate backflow protection, because the regulations say that the shower head could be dropped into contaminated water in the WC pan, for example, at the same time as the water pressure in the shower supply drops, which could cause water to travel up the pipework. 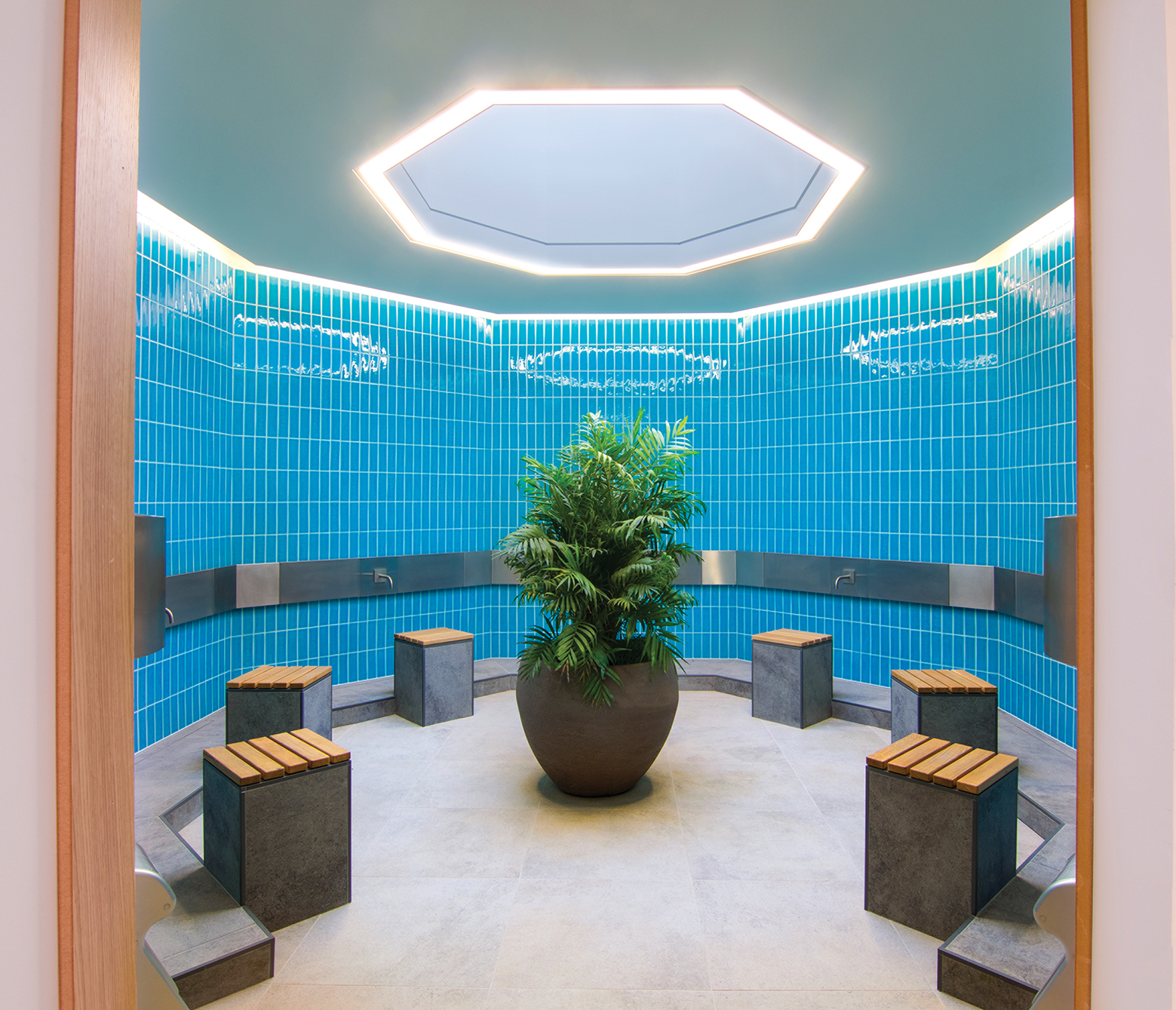 One of the ablution areas.

The Water Fittings Regulations classify the risk of backflow from fluids in contact with ablutionary showers as Fluid Category 5 – the highest risk level – because of the potential presence of faecal matter and other bodily fluids. Maidment says that, in response to the regulations for Category 5 installations, the design incorporates an independent supply pipe from a separate pumped system to ensure backflow does not occur.

To minimise water consumption, toilets are flushed – and the gardens irrigated – using rainwater harvested from the roof. The roof also houses a photovoltaic (PV) installation to meet the planning requirement for 10% of the building’s energy to come from renewable sources. ‘It’s a big roof, and with our all-electric solution, the PV installation made perfect sense,’ says Maidment.

The mosque’s variable occupancy patterns are making it challenging to commission the building services. ‘During Ramadan, the mosque was full every day so we were able to take advantage of this to make quite a lot of adjustments to optimise the system’s performance,’ says Maidment. He says the mosque is currently using more energy than predicted but, because ‘everything is monitored and metered’ over time, its performance will be optimised.

It is fitting that the building should live up to its billing as an eco-mosque. As Tim Winter, chairman of the Cambridge Mosque Trust, has noted: ‘Islamic civilisation has been based on the rejection of waste as an underestimation of God’s blessing so, in the construction of the new mosque here in Cambridge, we were very much in the forefront of the local environmental movement’. 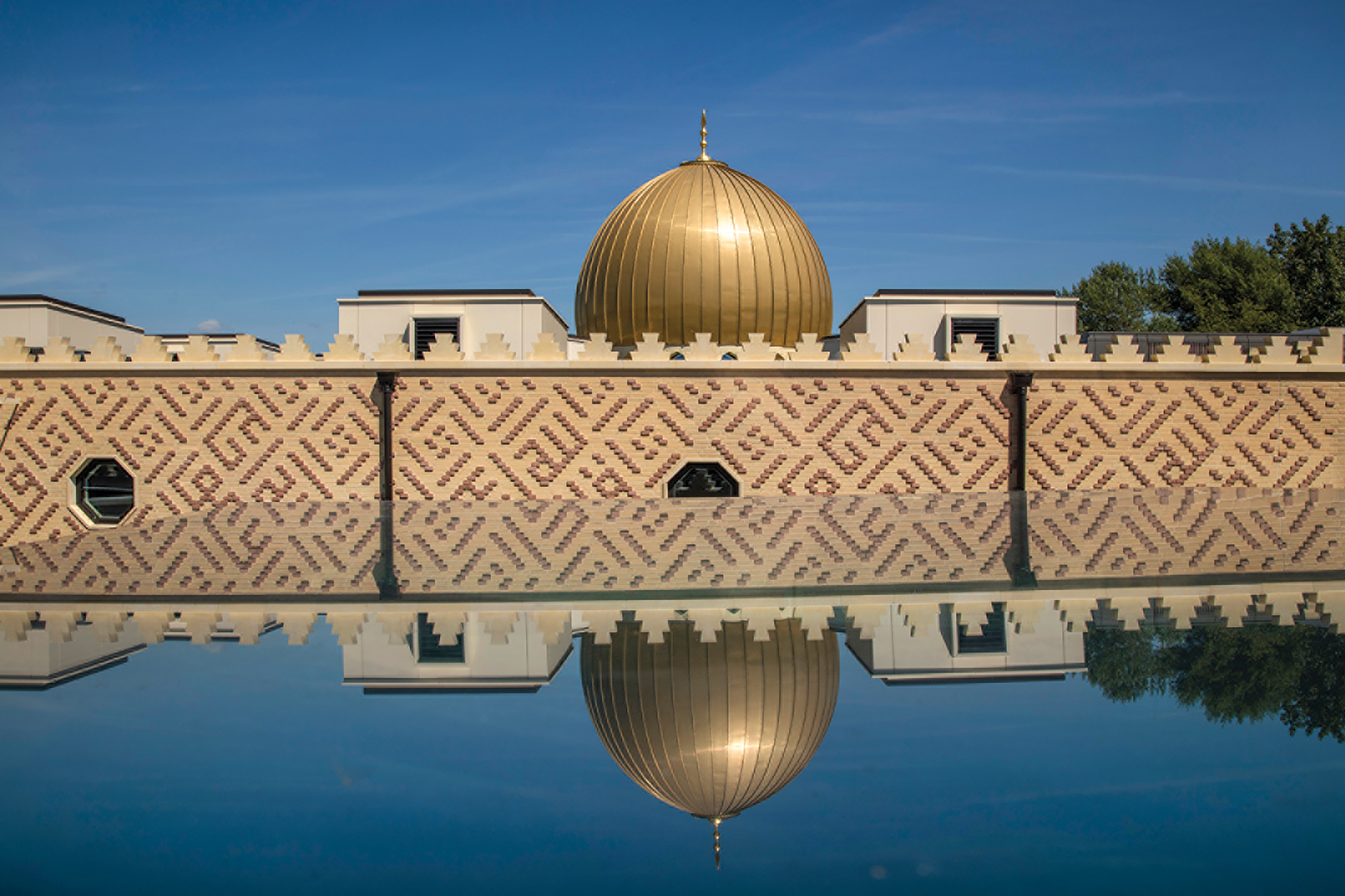 Standards are an essential tool of everyday life, underpinning everything from boiling a kettle to ordering products for a project. Hywel Davies explores the…

Ready or not? UPS Systems Monitoring and Management