As we ponder the journey to zero carbon for high-density housing, we must consider the most appropriate route for heating our dwellings. A five-year research project has analysed 11 systems for delivering heat and water and concluded that district systems may not be appropriate for the next 50% step-reduction in carbon. The study calculates that alternatives can achieve this with both reduced capital cost and cheaper occupant bills.

This research was prompted by concerns from project collaborators: developers questioned the increasing complexity and cost of installation; housing associations were troubled that occupant energy bills were increasing irrespective of targeted energy use reductions; and there was a wide perception of a focus on ‘supply side’ systems, rather than on cutting energy demand.

Heating and hot-water systems installation costs have doubled in real terms over the past 10 years (Figure 1). Only a few years ago, the size of a home gas boiler was less than 12kW, but today’s boiler/district heating interface unit (HIU) is typically 35kW or larger. So, counterintuitively, as the thermal performance of buildings has improved over time, the systems’ capacities and costs have increased.

The requirement of adding combined heat and power (CHP) onto the district heating has added a further layer of complexity, and is locking us into high-temperature distribution systems with their fossil-fuels combustion origins and high standing losses.

While acknowledging that much of the existing building stock may well continue to have a significant heat demand and so benefit from centralised distribution of heat (particularly as carbon-emitting gas boilers are phased out), there is the opportunity to cut the need for delivered heat in new builds.

Figure 2: Example of actual heat bills for a district heating system with CHP, averaged across a high-density development, illustrating how the annual service charge becomes as large as the energy delivered kWh bill for smaller and for low-energy demand dwellings

It has proved difficult to cut the costs and complexity of district systems when serving buildings with reducing demand for delivered heat. Consequently, the service charge portion of the bills – which includes central plant and distribution losses, maintenance and management costs – are becoming as large as the occupants’ metered kWh bill (Figure 2).

The expected continued reduction in the grid electricity carbon intensity factor and the acknowledgement of increased network losses in SAP 10 means this situation is only going to intensify. So, this research started with the proposition that there may be benefits in both reduced capital and running costs in lowering energy demand en route to zero carbon.

The research programme identified and analysed 11 key system variants (Figure 3), modelled them in energy terms, and assessed each for zero carbon future-proofing and for their relative capital costs and operating costs. Real project data was identified for some of the systems to allow spot correlation checking.

Those that scored well overall, but are not well known to industry, were further checked to ensure proven kit availability and in-use experience at scale. Where the choice of systems had required implication beyond the system itself – for example, related fabric enhancement – there was detailed investigation to ensure these costs were included in the assessment. 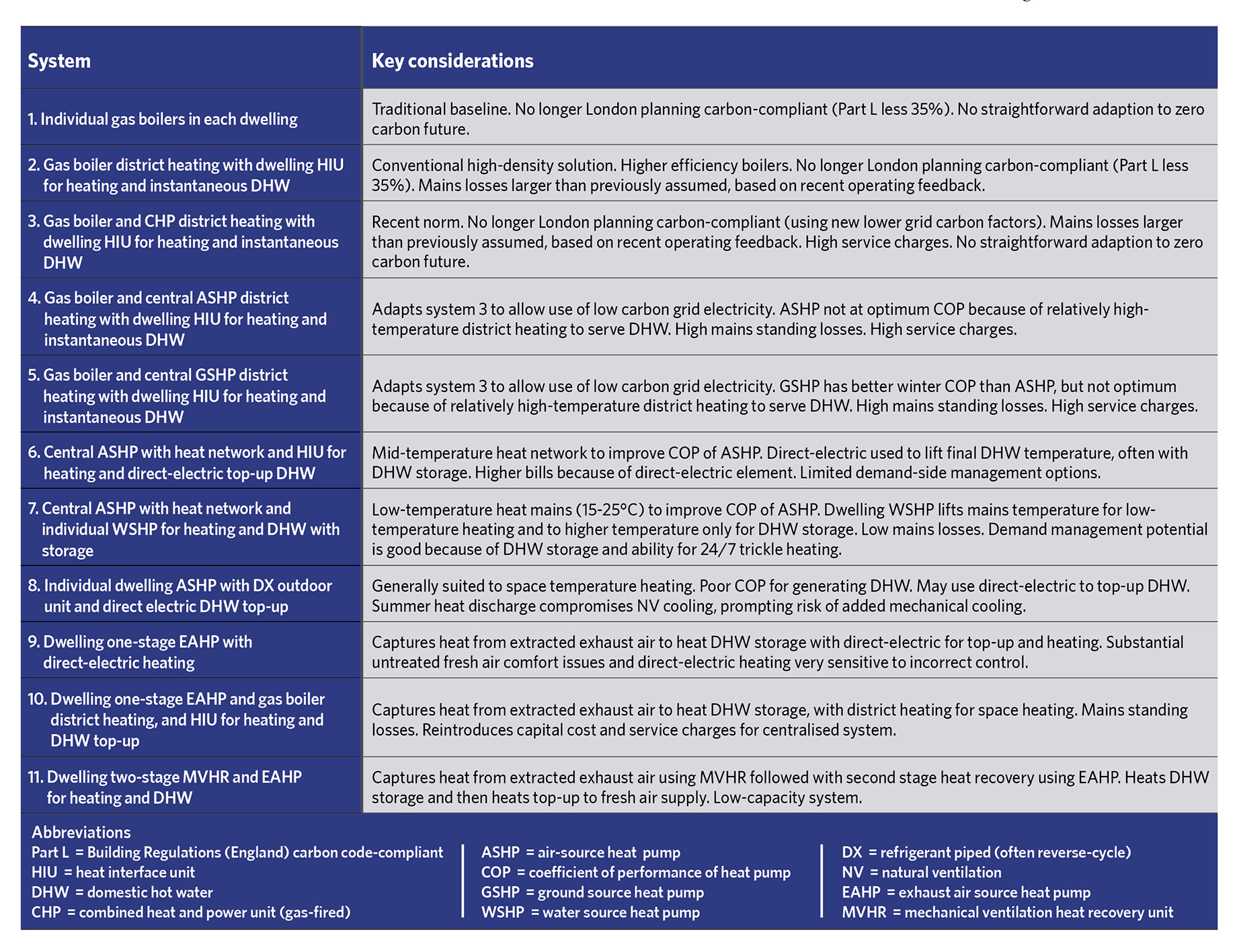 A key energy modelling parameter was to be able to adjust heat-pump coefficient of performances (COPs) based on outdoor air source temperatures as well as sink temperatures.

This showed that the same air source heat pump operating mainly in mid-winter (because of enhanced building thermal performance) has a lower yearly averaged COP than the same model heating a less insulated dwelling with a longer heating period carrying over into the milder mid-seasons. However, the lowest energy bills and carbon emissions were for the heat pump working at a lower COP across a shorter heating season.

This demonstrated that comparisons based on systems’ efficiencies can be misleading. It shows the shortcoming of SAP in its inability to accommodate varying COPs across the year.

A zero carbon future-proofing assessment relates to the ability of a system to switch to 100% zero carbon energy sources within the life of the system. Onsite PV renewable energy generation was assumed to be generally insufficient because the study was focused on high-density development. Biomass and similar renewables were disregarded because of urban air quality concerns. Hence, all renewable energy for heating was assumed to be delivered via the electrical grid.

For assessment of maintenance and service charges, experience has been drawn from the FM side of the construction industry. The level of maintenance was assessed as being broadly in proportion to the number of active components in the system. Network energy standing losses were also considered as part of the standing charge using SAP10 defaults, as these better reflected monitored data from recent completed projects.

Each system was ranked under each characteristic and then these were combined to give an overall rating (Figure 4). This preserved a level of transparency given that each of the different contributing stakeholders had differing opinions on relative importance of each criterion. 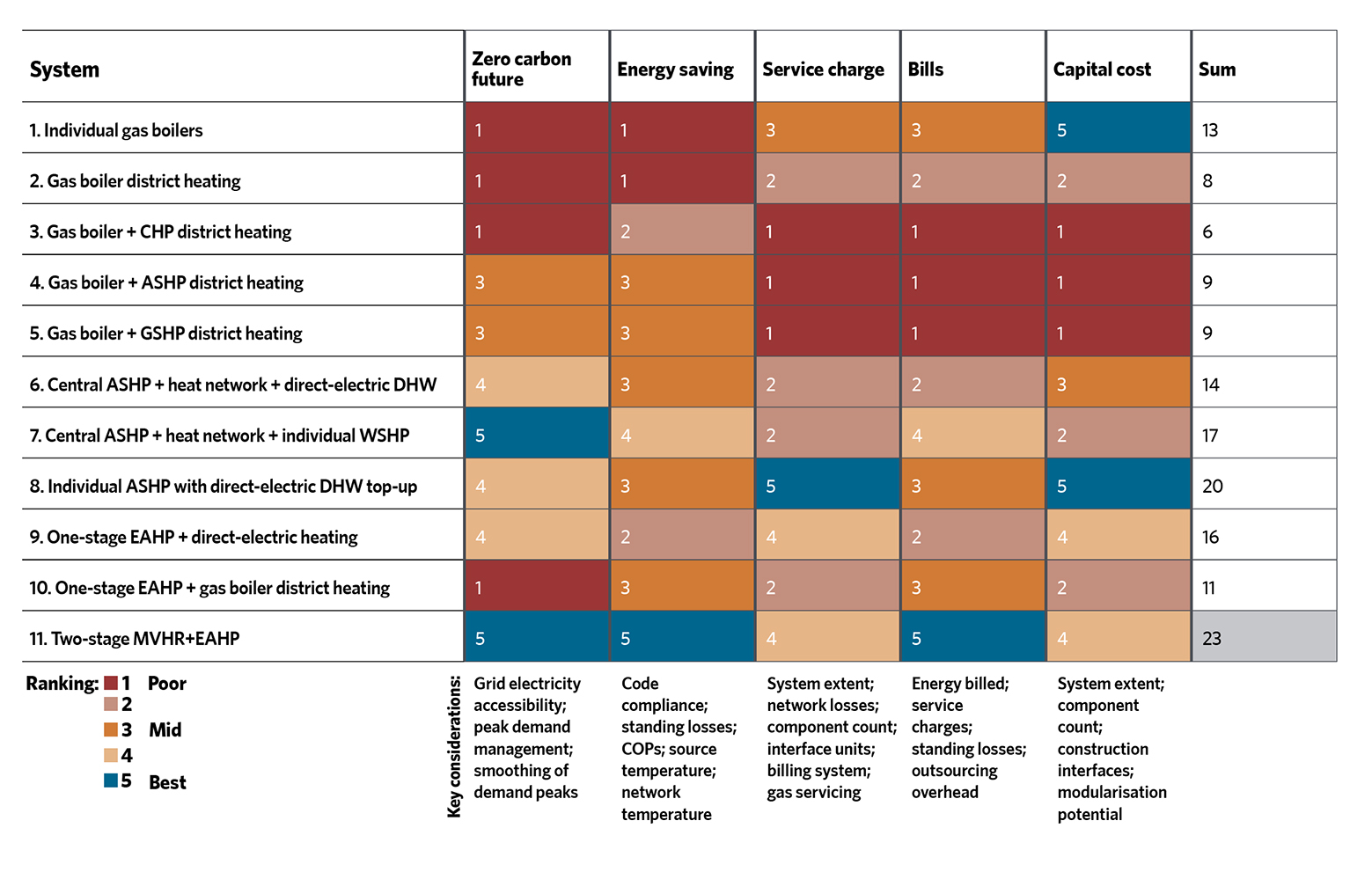 The highest-rated shortlisted systems were then tested for market acceptability, proven kit availability and indirect cost implications. This meant systems such as the individual air source heat pumps, although dominant in various markets abroad, were discarded as unsuitable for UK high-density housing.

The system that emerged as most favoured was the one that harnessed most of its heat from that already available inside each dwelling and that avoided needing any site-imported heat deliver. This ‘heat autonomy’ system uses an in-dwelling unitary two-stage ventilation heat recovery and heat pump (two-stage MVHR+EAHP) (Figure 5). It exploits the waste heat from occupants, appliances, cooking and showers, which is captured via extract ventilation and upgraded using the small exhaust air heat pump.

This has a heating capacity of around 1.5kW for delivering both space heating and hot water. To achieve this requires high dwelling envelope thermal performance, so the assessed cost for this system also included the building fabric enhancements.

This unit was originally developed – and has gained a proven track record – as a Passivhaus-certified product. Many thousands of the units have been installed, largely across southern Scandinavia and Germany. A key aspect of its proven track record is the integration of MVHR, heat pump, hot-water storage and controls in a single unitary box that is factory assembled and tested before delivery to the site.

This is unlike the UK convention of multiple components from various suppliers – such as MVHR, HIU, metering, heating-emitter system, and controls – being assembled and configured under less-than-optimum site conditions.

Its unitary configuration and lack of distribution heat pipework makes it ideal for modular offsite building fabrication. Its electrical power demand is small enough to operate from a standard 13-amp outlet without any enhancement to dwelling electrics.

To allow the use of this two-stage MVHR+EAHP unit, building fabric enhancement was investigated in some depth, and a stripped-down version of Passivhaus was found to deliver a capital cost sweet point.

The modelled housing in London achieved a peak heating capacity closely related to Passivhaus recommendations. This was because of the reduced envelope area of high-density housing in the UK compared with Germany and the smaller floor areas (which had similar heat gains). A milder climate than that in Passivhaus mid-Germany also helped.

The reduced envelope area allowed significant thermal performance relaxation, meaning fabric enhancements where there is little UK experience and costs are high were avoided. Hence, instead of triple-glazing, high-performance double-glazing is used, and there is a more relaxed envelope air leakage of 2m3.m-2 per hour (at 50Pa test pressure) rather than Passivhaus’ 0.6 air changes per hour. 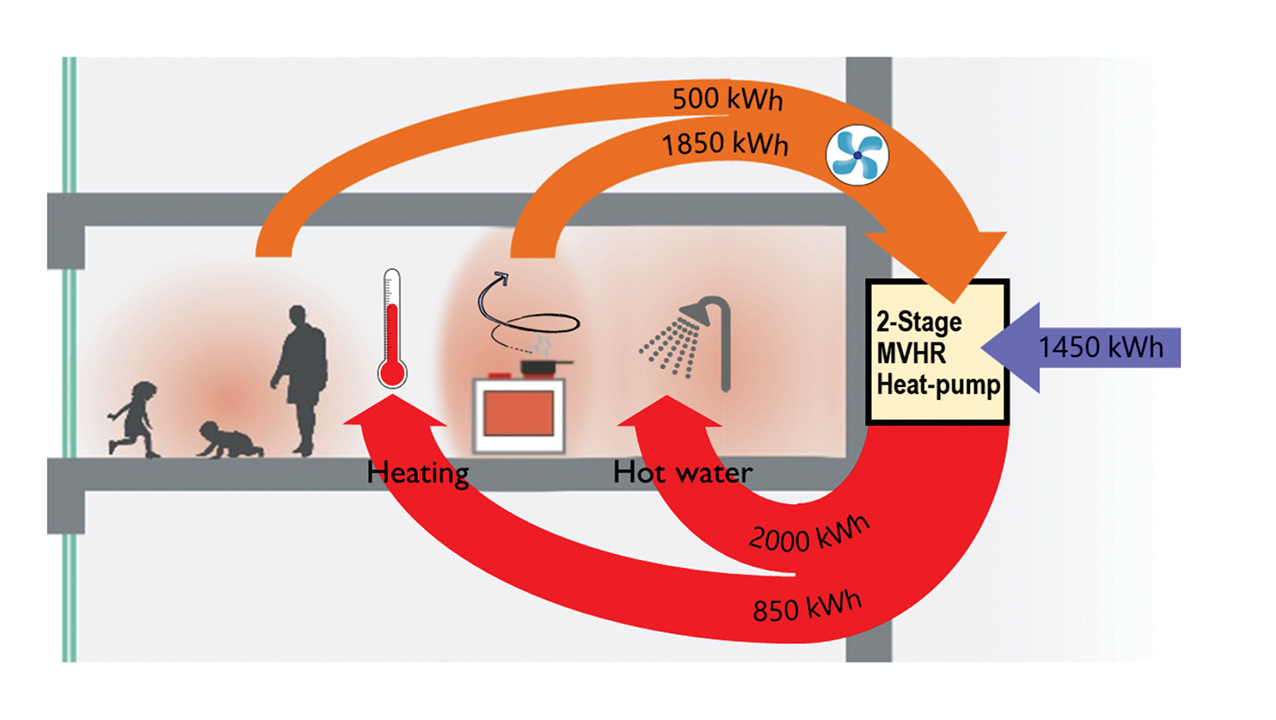 Well-insulated buildings have significantly slower thermal response to low temperatures compared with less insulated buildings. Thus, instead of the current conventional -4°C design external conditions, the conduction component of the heat loss can use the value of -1°C according to other CIBSE advice.1

Window area was found to be a critical component, and an optimised area of 30% of the façade was identified as meeting the heating criteria, as well as daylighting and summer overheating criteria.

The enhanced façade thermal performance reduces peak space heating by half, from about 25-30W.m-2 to 10-15W.m-2 (of floor area).

Key to bringing energy demand down is reducing domestic hot-water demand. Low-flow, high-performance hot water outlets rated under the new European Water Labelled (EWL)2 system were specified throughout. This included shower heads rated at ‘A’ at 6L per minute, which, overall, almost halved hot-water demands, and reduced storage needs by around 40%. 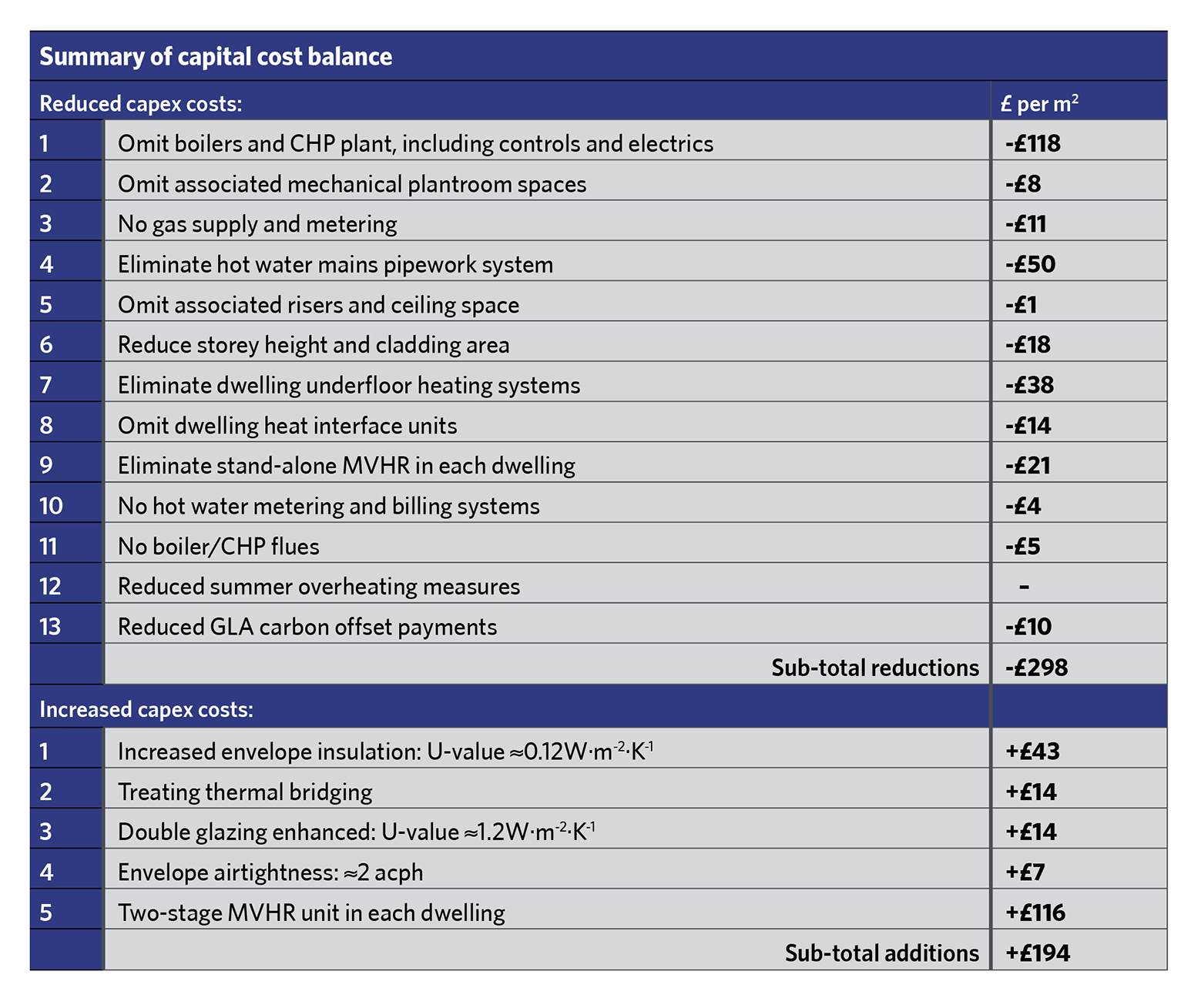 Figure 6: Heat autonomy capital cost implications. These estimates are presented as ‘add and omits’ to a standard project cost plan, and indicate overall costs saving of around £100 per m2

Add-back costs include the two-stage MVHR+EAHP, as well as the selective building envelope enhancements. Even including the building fabric enhancements, overall potential capital cost savings of around £100 per m2 were identified, equating to 3.3% of overall construction costs for a typical high-density housing scheme at £3,000 per m2.

As a postscript, the heat autonomy approach is being implemented on various large developments in London where the Energy Assessments submitted to the GLA are indicating 70% savings against Part L using SAP 10 carbon emissions factors – albeit these are calculated using SAP’s simplistic assessment of heat pump COPs.

About the author
Chris Twinn FCIBSE is a consultant at Twinn Sustainability Innovation.