The UK government’s legal requirement for net zero national greenhouse gas emissions by 2050 means that the UK must cut emissions across the whole economy, including transport, energy supply, industry and the built environment. The UK Climate Change Committee’s (CCC) figures show that heating and hot water production in buildings are the largest contributors to emissions from the built environment, and it has noted that the goal is ‘feasible but challenging’. This CPD will explore how heat pumps can make a significant contribution to that goal.

The UK 2017 Clean Growth Strategy1 highlighted the built environment as a significant source of emissions, with heating in buildings and industry creating around 32% of total UK emissions. The recent report2 by CCC highlights that, for buildings, ‘progress in delivering emissions reductions has broadly flattened since 2015’ and, therefore, critically assessing the opportunities for improvements in heating and hot water production is important for potential emissions reductions.

In November 2020, the UK government published The Ten Point Plan for a Green Industrial Revolution3 in an attempt to increase energy efficiency across the economy and grow offshore wind and nuclear energy generation capacity, alongside an aim of developing 5GW of low carbon hydrogen production capacity by 2030.

The government plans to trial hydrogen for heating in neighbourhoods and towns by the same date. The Ten Point Plan emphasises that the success of the hydrogen approach is only possible when accompanied by the growth of carbon capture and storage infrastructure. By 2050, the CCC believes that all UK heat demand can be met by low carbon sources: 52% heat pumps; 42% district heating; 5% hydrogen boilers; and 1% new direct electric heating.

Shortly after the plan was launched, the CCC published The Sixth Carbon Budget,1 which recommends an interim target of a 78% cut in UK emissions against 1990 levels by 2035 – that represents a 63% reduction compared with 2019 levels.

As UK government and CCC reports highlight, a crucial development for the UK’s zero net carbon policy is the decarbonisation of its electricity grid. Renewable energy sources (which excludes nuclear) accounted4 for 41% of UK total electricity use in year ending September 2020, at 130TWh.

The main renewable source was wind at 74TWh. The Ten Point Plan includes growth of offshore wind from 24GW in 2020 to 40GW by 2030. Natural gas currently remains a significant fuel for UK electricity generation (at about 35%); however, coal use for electricity production has fallen dramatically over the past decade, to below 2%.

In December 2020, the UK government published the energy white paper Powering our Net Zero Future5 that reiterates its commitment to reducing the UK’s reliance on fossil fuels.

CCC’s The Sixth Carbon Budget identities that efficiency measures can contribute around 34% of emissions reductions, and notes that the share contributed by low carbon heating ‘dominates the picture from 2028’.

It also recommends a phase-out of natural gas heating in commercial buildings by 2033, with public buildings working to a deadline of 2030. The CCC’s goal is that by 2030, 37% of public and commercial heat demand is met by low carbon sources, with around two-thirds of this met by heat pumps, and just under one-third by heat networks.

The Ten Point Plan proposals for buildings include higher efficiency standards for homes and a drive towards 600,000 heat pump installations per year by 2028 (compared with the 27,000 that were installed in 2019).

Part of the CCC’s overall vision is that high-carbon options for heating in buildings are phased out, which may then be switched to electric alternatives, with an aim for UK electricity production to be zero carbon by 2035, and offshore wind growing from a projected 40GW by 2030 to 100GW or more by 2050.

The CCC identifies two main pathways that aim to ‘reduce emissions in buildings to zero by 2050 at the latest’. The main, so-called ‘Balanced Net Zero Pathway’ is noted by CCC as requiring ‘a major ramp-up from what is happening today in supply chains for insulation, heat pumps and heat networks’, but its detailed analysis demonstrates that it is feasible. It reflects four priorities over the coming decade or so:

Anticipated updates to the Building Regulations’ supporting documents will include fuel carbon factors that reflect the UK’s move to renewables for generating electricity. As well as low carbon heating, there is also an increasing interest in reducing the embodied carbon of buildings and their systems.

The CCC6 proposes that the UK government should introduce ‘mandatory disclosure of whole-life carbon in buildings and infrastructure to facilitate benchmarking as soon as possible’. Environmental product declarations (EPDs) that comply to BS EN 15804:2012+A2:20197 can be used to show the embodied carbon of a product.

If an EPD is not available, manufacturers can supply information for a carbon calculation such as that for a ‘mid-level’ assessment as set out in CIBSE TM65: Embodied carbon of building services equipment – calculation methodology and guidance.

The recent consultation on the Future Buildings Standard8 (which closed in April 2021) will be used to inform the development of the next iteration of Part L of the Building Regulations relating to non-dwellings (new and existing). Although this standard is not yet finalised, it is clear from the consultation that government is focused on raising energy efficiency requirements for new non-domestic buildings.

The aim will be to deliver a 27% improvement on new non-dwellings compared with current Part L standards and, practically, reduce the demand on heating systems. One of the specific questions in the consultation document is whether wet space heating systems should be designed to operate with a flow temperature of 55oC, or lower, in the final heating circuit.

As well as enabling the widespread adoption of heat pumps, this flow temperature would also increase the efficiency of condensing boilers, and reduce losses and improve system efficiencies in heat networks – easing the transition to low carbon technologies.

Application of heat pumps in buildings, combined with the greening of the UK’s electricity grid, will make a significant reduction to UK carbon emissions. The carbon benefit will increase over time as the grid moves further away from fossil-fuel generated electricity.

As the CCC indicates, meeting the 2050 net zero target for the built environment requires ‘minimising costs and disruption [which] means working as much as possible with existing technology lifetimes – particularly the heating technology stock’ while also noting ‘we want to move quickly enough to be able to reach Net Zero without scrapping existing heating systems’.

The CCC estimates that there is a need to support the heat pump sector on a steep growth curve, from 27,000 units in 2019 to one million units a year by 2030.

Heat pump technology has evolved in recent years to allow increased applications for commercial heating and hot water systems. The seasonal coefficient of performance (SCOP) is the overall performance of a heat pump using electricity across the heating season.

It is calculated by taking the reference annual heating demand and dividing that by annual energy consumption for heating (details on the calculation are included in BS EN 148259).

As discussed in CIBSE CPD Module 171, high temperature heat pumps can produce hot water supply up to 90oC, allowing their application in projects that have requirements for significant amounts of hot water with high peak demands (such as hotels, hospitals and leisure centres).

Volume and temperature requirements are key to correct sizing of the system, as well as the hot water usage profile across the day and the ability to meet peak demands. The heating required for the domestic hot water load must be assessed across the operating year, since the performance – and output – of a heat pump will drop with reducing external air temperatures.

Heat pumps are available that can operate as part of a modular setup and are able to meet a variety of load requirements. A multiple unit system can cascade heat pumps on and off to meet the heat load from a building.

For example, a commercially available heat pump (as shown in Figure 1) can work as a 16-unit system, allowing for 0.5kW increments of capacity, from 18kW to 688kW, with water flow temperatures available from 25oC to 70oC.

In order to meet the necessity of reducing carbon emissions, several technologies are being developed and trialled. As the UK electricity supply grid increasingly supplies electricity with lower carbon impact, heat pumps – in their various guises – look well set to contribute to a more sustainable future of heating and hot water production. 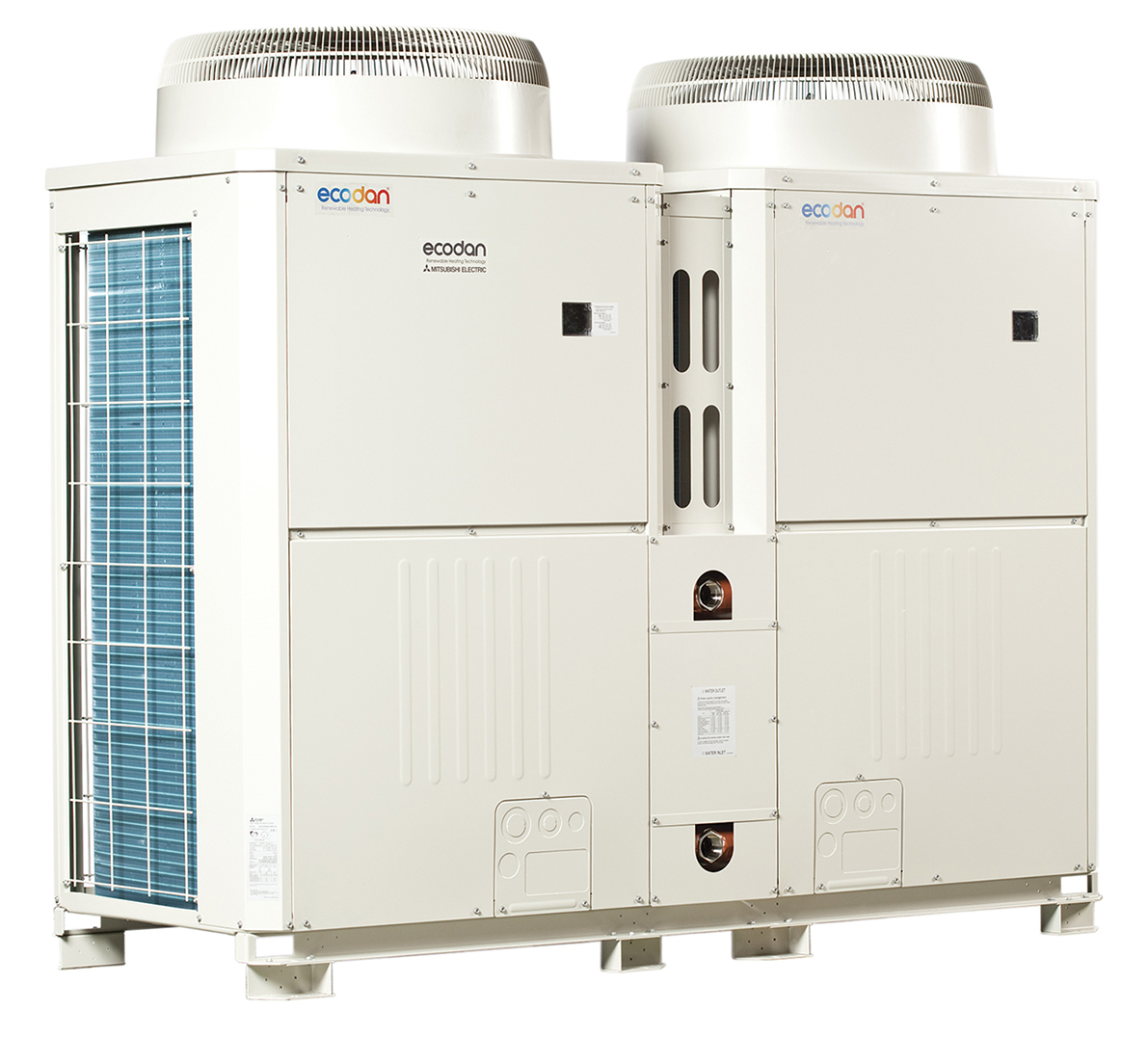 Figure 1: An example of a modular air source heat pump installation that can be used as part of modular systems able to supply from 18kW to 688kW, in 0.5k increments, with water flow temperatures available from 25oC to 70oC (Source: http://les.mitsubishielectric.co.uk )

Heat pumps can be applied in buildings alongside other technologies to boost the renewable element of a project – and to reduce the requirement for heat energy. For example, used with on-site photovoltaic (PV) panels, less electrical energy from the grid is required to serve the building and the electrified heating system.

As discussed in CIBSE Journal CPD Module 174 (January 2021), water source heat pumps can successfully combine with fifth-generation, or ‘ambient,’ heat networks that employ water at, or close to, ambient temperature.

These are used in conjunction with heat pumps to raise temperature for the delivery of heating and hot water, and so utilise heat that may have been recovered from otherwise ‘wasted’ heat or generated centrally employing lower temperature heat pumps.

Water source heat pumps can then be placed around the building to boost the temperature to usable levels at the point of demand.

Where space heating is provided by heat pump technology, it is not unreasonable to expect that the cooling-only chiller market, and the variable refrigerant flow (VRF)/variable refrigerant volume (VRV) markets – where the same parent heat pump technology is being deployed – will transition towards heating and cooling. This means that there may be a move to reversible heat pump chillers, with heat recovery capabilities in the system.

Such systems can be included within the HVAC plant, with little or no impact on space requirements. Heat recovery systems that make use of heat pump technology can be particularly useful for mixed-use developments or large offices, where both heating and cooling demands are present at any one time.

Heat can be captured from the cooling process and used to reduce heating requirements in other areas of the building (or to pre-heat domestic hot water). Building operators and designers will seek new options for heating and hot water provision, and this may not always be a direct heat pump swap in place of a natural gas boiler, but also include heat pumps that can provide concurrent heating and cooling.

In the UK, commercial electricity is approximately £0.15 per kWh, and with natural gas at around £0.05 per kWh, a commercial heat pump would have to deliver a SCOP of above 3 to deliver an operating cost benefit (at current prices).

With appropriate design and operation, this should be readily attainable for modern heat pump installations. As noted in the 2018 study for the Greater London Authority,10 it is very difficult to draw a simple conclusion on capital costs for new systems, but ‘on average, the capital costs of heat pumps are likely to be slightly higher than a “business as usual” heating system’.

The non-domestic Renewable Heat Incentive (RHI) has recently been extended11 to March 2022 for projects in the pipeline, after which date it is due to close. However, the UK government is exploring options for a replacement programme to overcome barriers to purchase, as indicated in the ‘Future support for low carbon heat’ consultation that took place in 2020.

The ‘Clean Heat Grant’ that is set to start in 2022 is expected to offer grants of up to £4,000 towards heat pump installations that have a capacity of 45kW or less.