When designing systems that include both an air source heat pump (ASHP) and, typically, a gas-fired boiler in a bivalent system, the optimal operational conditions for both technologies must be considered so as to maximise heat pump utilisation while maintaining system performance and overall efficiency – all while avoiding conflict in the bivalent system. This CPD will present some of the options that have been applied in practice to provide a successful application for bivalent heating and hot water systems.

A building fully served with ASHPs may well be able to achieve one of the lowest carbon footprints in new commercial building stock, as discussed in detail in the recently published CIBSE AM17 Heat pump installations for large non-domestic buildings.1 As the ambient air temperature rises, so does the heating efficiency and capacity of an ASHP.

Since space heating loads decrease as the external temperature rises, sizing an ASHP for peak load at a design temperature that occurs only rarely will result in a unit selection that is oversized for the majority of its operational life. In any case, it is not always possible to engineer all projects and meet budgets by solely employing ASHPs.

Amalgamating traditional heating with low and zero carbon technologies is a well-established method to reduce the carbon impact of the heat generators, and is likely to include technologies such as combined heat and power (CHP), biomass, ground source heat pumps (GSHPs) and ASHPs integrated with a natural gas-fired boiler.

ASHPs and high-efficiency condensing boilers or direct electric appliances in a bivalent system may offer a practicable solution to overcome project limitations while meeting heat demand more sustainably. The challenge, however, is to design the heat pump and boiler into a single, integrated system that successfully maximises the efficiency of both technologies.

If a combined boiler and heat pump system – known as a bivalent system – is considered as being appropriate for a specific building application, then ideally the preliminary sizing should maximise the contribution of the heat pump to the total load (while taking any limiting factors into account). AM17 notes that such a bivalent system will typically employ a primary and secondary heating generator.

The primary system provides part of the peak load, with the secondary system supplying either the remainder of the peak load – a parallel bivalent system – so minimising the contribution by the secondary plant, or able to meet the entire load, under peak conditions – an alternate bivalent system. As the primary and secondary generators are likely to be hydraulically connected, careful design is required to ensure that there is no unwanted impact on the efficiency or performance for either one.

As noted in CIBSE AM17, the use of an hourly load model can help in understanding the impact of different secondary heat source sizes when considering factors such as:

At its simplest, it may be convenient to design to a 10K differential which, coincidentally, is similar to the 11K ∆θ, such as 82°C flow, 71°C return, as employed in older commercial heating systems. However, this loses the advantages derived from employing higher differential temperatures, which could include smaller pipe sizes, reduced volume flow and lower pump duties.

Employing a thermal store allows the accumulation of heated water, so flattening the peak demand, at the same time also providing opportunity to hydronically decouple the two generators while maintaining  thermal connection. A thermal store allows lower capacity heat generators than would otherwise be needed, and will also reduce their on-off cycling frequency, since at every on-off cycle there is a decrease in overall efficiency as a result of start-up losses.

AM17 notes that an excessive number of on-off cycles can damage the compressor (in a heat pump) as well as impact the efficiency, and manufacturers typically limit the number of on-off cycles to a maximum (dependent on the system), which could mean that a heat pump may not restart within 15 minutes (or longer) of shutting off. The thermal store will also provide a resource for any defrost cycle for the heat pump.

Using a ‘load assist method’, the ASHP would run as the lead provider of heat to meet the base load, with boiler(s) used to assist as heat demand increases. However, the primary flow temperature and consequent temperature differentials must be suitable for both the ASHP and boiler technology.

Running a full system with a ∆θ of 10K would not be an issue for most boiler technologies, but it can reduce the performance of many ASHPs that typically perform better when operating with a ∆θ of 5K to 7K. To ensure that the condensing gas boiler operates in a condensing mode, the return water temperature must remain under 54°C (and preferably lower). An example of a ‘load assist’ arrangement is shown in Figure 1. 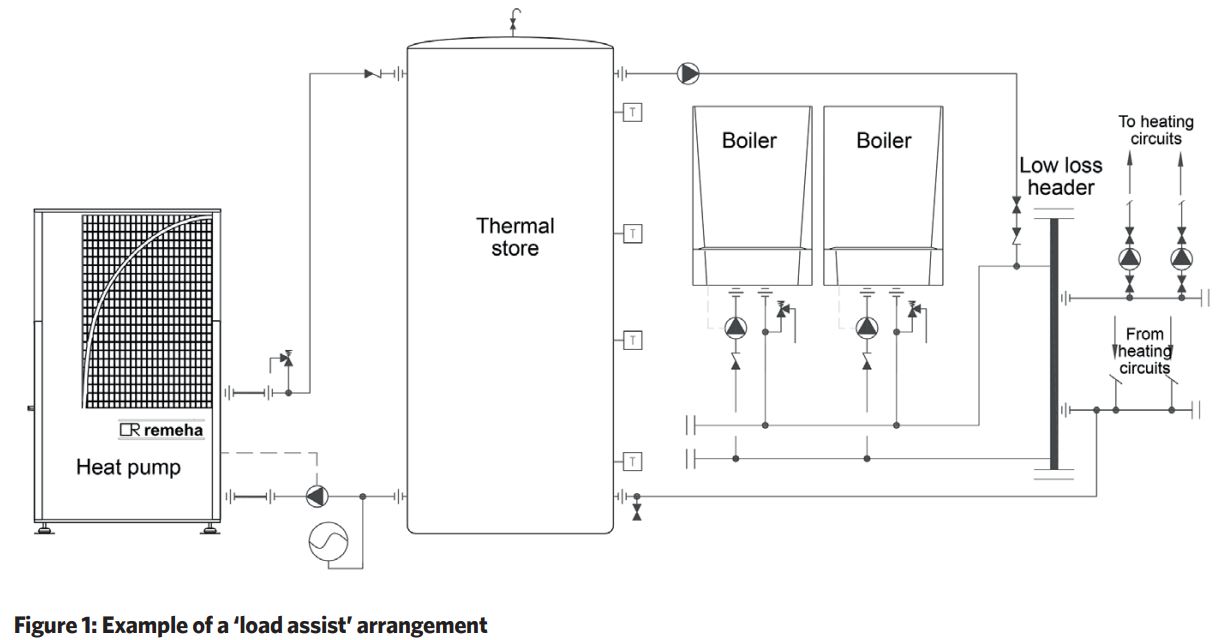 The thermal store discharge pump is modulated to match building load. It should never be allowed to fully deplete the resource of heated water from the thermal store, as this would disrupt the thermal stratification and potentially deliver a flow temperature that is below the maximum potential. To avoid this, the boilers should be cascaded on, to assist with the demand prior to the store being depleted.

The load ratio of boiler to ASHP in this arrangement would be project-specific. If both the ASHP and boiler(s) are required to satisfy peak demand, any risks arising from the lack of redundancy must be considered.

The advantages of the ‘load assist’ arrangement are flexibility and scalability, since both generators can run together or independently as demands fluctuate. 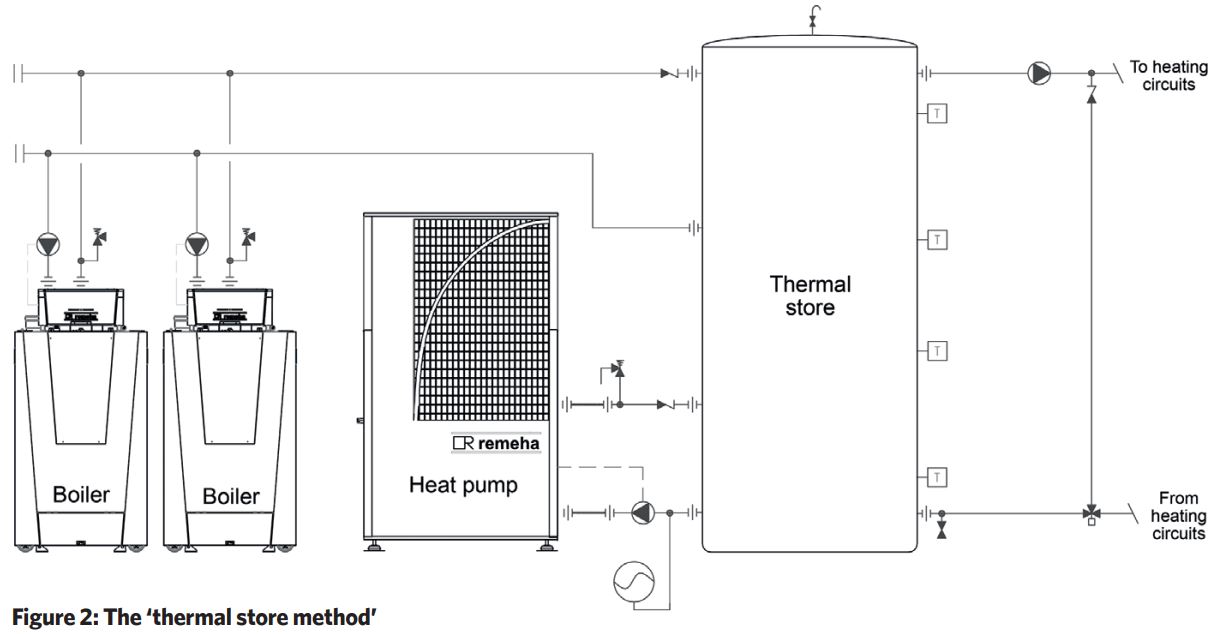 An alternative is the ‘thermal store method’ that utilises a boiler and ASHP to feed into a common thermal store, and the heating power required to satisfy system loads is shared. The ASHP maintains a stratified warm layer at the bottom of the tank to heat the cool return. The boiler draws warm water from the top of this layer and raises its temperature to the target store outlet temperature.

Under non-steady state load conditions, care should be taken to avoid the boiler being required to top up the temperature by less than 10K, otherwise a temperature overshoot could occur in the tank, since most condensing boilers are unable to operate with less than 10K ∆θ. The introduction of a mixing valve to blend flow temperatures on the demand side of the thermal store can help resolve this.

The controls should ensure that the boiler contribution is held back until absolutely required. This is achieved through close monitoring of tank temperatures, at multiple points, together with the feedback of boiler and ASHP flow temperatures.

The ‘injection method’ is very similar to the thermal store method. This approach uses the boiler(s) to boost the flow temperature to the required set point at times when the ASHP is unable to satisfy the demand. The system, illustrated in Figure 3, delivers heat from the ASHP to a return header prior to the low-loss header (LLH).

Typically, there is approximately 1%-2.5% drop in efficiency for a gas condensing boiler when preheating a 30°C return by 5K-10K, as a result of reduced flue gas condensation.

When considering domestic hot water (DHW) generation, there are a number of ways in which ASHPs can be used in a bivalent arrangement with traditional methods, such as gas-fired condensing water heaters or direct electric solutions, to boost the DHW to usable and ultimately safe temperatures while also avoiding legionella propagation.

The efficiency of a heat pump will reduce significantly as the temperature difference increases between the evaporator (at the air source) and the condenser (heating the water). With the preferred ASHP ∆θ typically being between 5K-10K, this will mean that multiple passes are needed to achieve the temperature increase to raise incoming water at, for example, 10°C to the required hot water temperature.

In a bivalent system, such as the example illustrated in Figure 4, an ASHP can preheat the incoming water in a cylinder, and an auxiliary cylinder or direct-fired gas condensing water heater can then be used to boost the DHW temperature to meet the demand.

As with the space heating applications, to prevent an excessive number of stop-start operations the ASHP should not be oversized. Understanding the DHW usage profile for the building is key to ensuring the optimum size. This includes daily demands, the peak hot water flow requirements and the time period between peak demands.

Any DHW system in the UK should be designed to minimise the opportunity for legionella by ensuring that it meets the requirements of HSG 274.2 For example, the system illustrated in Figure 4 must be able to carry out a pasteurisation cycle by heating the contents of storage cylinders to at least 60°C for at least one hour a day. 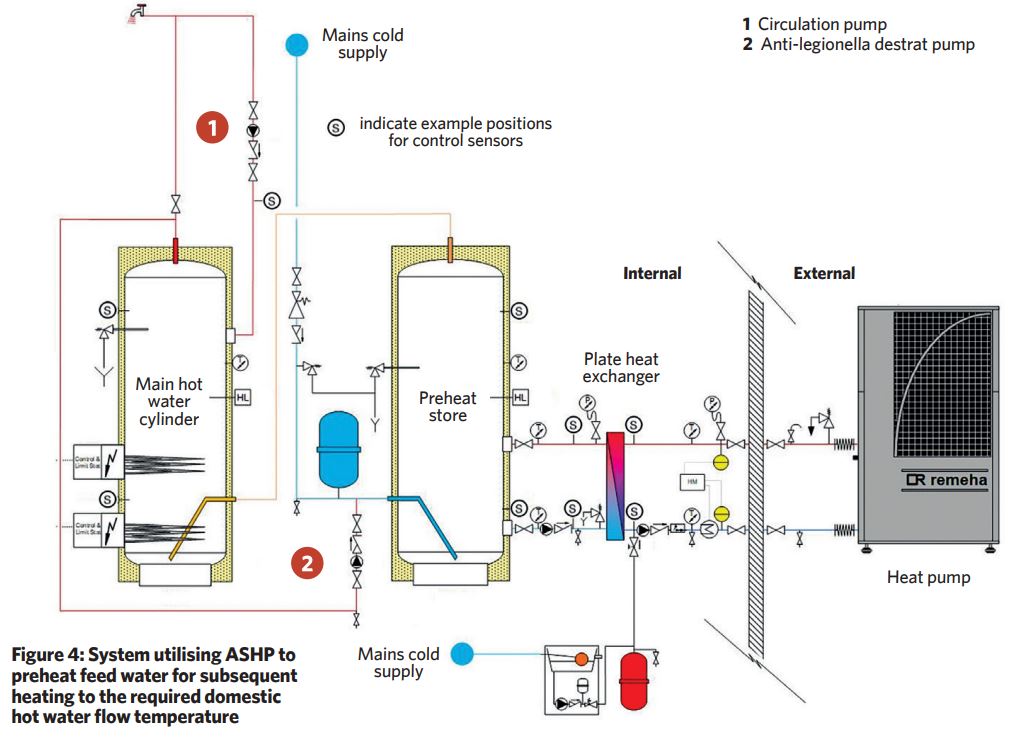 AM17 provides further information on the design of thermal stores, including the promotion of stratification; minimum number of temperature monitoring points through the height of the thermal store; and minimum volumes required to assist the ASHP during defrost cycles.

A note of caution in AM 17 is particularly apposite in these times of turbulent energy prices: ‘Should a gas boiler be selected as a secondary system, for example, fuel prices (or future fuel prices) may render the secondary system more economic to run than the primary system. The control system should protect the secondary system from being operated more often than intended, to prevent impact on projected/modelled performance and emissions.’

Along with standalone, purpose-designed ASHP systems, bivalent systems can offer the opportunity for efficiency gains and emissions reduction from heating in both existing and new commercial premises. The prospects for operational success will be dependent on how closely the design assessment of loads reflects the actual demand, and how well the installed system can be controlled in use to maximise the efficiency of the whole integrated system while still meeting the building’s demands for heat.