Currently, two competing strategies are proposed for the wider decarbonisation of heat in the UK. One is to electrify heat, making use of the anticipated decrease in carbon intensity of the electricity grid to reduce the carbon footprint of the delivered heat. The other is to introduce low carbon hydrogen into the gas network and so, partially – or completely – offset the carbon emissions generated from burning gas in each property. This article will focus on the use of decarbonised electricity to provide domestic heat.

For electrification of heat, the more efficiently a system can deliver heat, the greater the carbon benefit and cost reduction per kWh. Direct electric heating operates at conversion efficiencies of around 100%. By using heat pumps, however, the ratio of heat delivered to electricity consumed can go up by 250-400%. The difference in these heat pump efficiencies is broadly based on differences between input and output temperatures: the smaller the temperature gradient, the less electricity required to generate heat.

Ground temperatures can deliver source temperatures of between 1-10°C reasonably consistently throughout the year, so give a more stable base than air source systems in the colder winter months, when more heat is required. As a result, the seasonal performance factors (SPFs) for ground source heat pump (GSHP) systems are typically higher than air source heat pump (ASHP) equivalents.

Where cooling is required, ground source systems have the advantage that heat absorbed during the summer cooling season could be used to recharge the ground array. The efficiency gain comes from the increased cost of a ground array to collect the ambient heat needed as the source. A domestic GSHP system can cost two to four times more than an equivalently sized ASHP system, so reducing this cost improves the attractiveness of the GSHP option.

Shared-loop heat networks consist of a communal distribution system moving low-grade heat between the source and the individual heat pumps contained within each property. This differs from the traditional centralised district heating network (DHN), as each property is fitted with its own heat pump unit, rather than relying on centralised plant.

Shared-loop systems take source heat from a range of resources. This can be in the form of an ambient district heating network collecting heat from open or closed loops, gathering energy from the ground, aquifers, surface water or seawater. This network circulates the fluid through the collector at ambient ground temperatures (1-10°C).

For larger schemes, it could take its heat from sewage treatment or minewater sources, where the resource could be 10-20°C. These schemes need coordination with the Coal Authority or relevant utility, and there may be a charge for the ambient energy. Both networks are installed using plastic uninsulated pipework between the collector structure and heat pumps.

Finally, an ambient network can be operated with an active heat source, such as a waste heat recovery system, a return leg of an existing DHN, or a dedicated low-grade heat source (such as ASHP). This system typically operates at temperatures of 20-25°C. As this type of network is operating at slightly higher temperatures, the pipework is usually insulated, although to a lower specification than standard DHNs.

A key benefit of any shared-loop network is reduced capital expenditure (capex) of the network. The operating temperatures mean the pipework can be installed in plastic pipe and retain an extended working life. This pipework can be uninsulated in most situations, and have external insulation added easily for required sections. As such, network infrastructure costs are lower than the installation of high-temperature DHN systems.

The network also experiences much lower system losses, as the temperature gradient between the network and ambient is very close. This is in comparison to high-temperature networks, where an ongoing issue for many buildings is the standing loss from the distribution network into shared spaces, creating summer overheating.

Having individual plant but a common fuel source is more in line with most residents’ experience, with individual control and responsibility for the domestic boiler. Each recipient is free to change their electricity provider.

One of the key limitations to the implementation of shared-loop networks is capital costs. At present, the capex for shared-loop infrastructure is a lot higher than corresponding gas or direct electric alternatives. The Renewable Heat Incentive offers support, but will stop accepting commercial applications in March 2021 and domestic applications a year later. The Clean Heat Grant consultation, launched in April 2020, indicated that shared-loop networks would be eligible for a £4,000 grant per heat pump (below 45kW). However, funding for this scheme is currently only described for 2022-24. 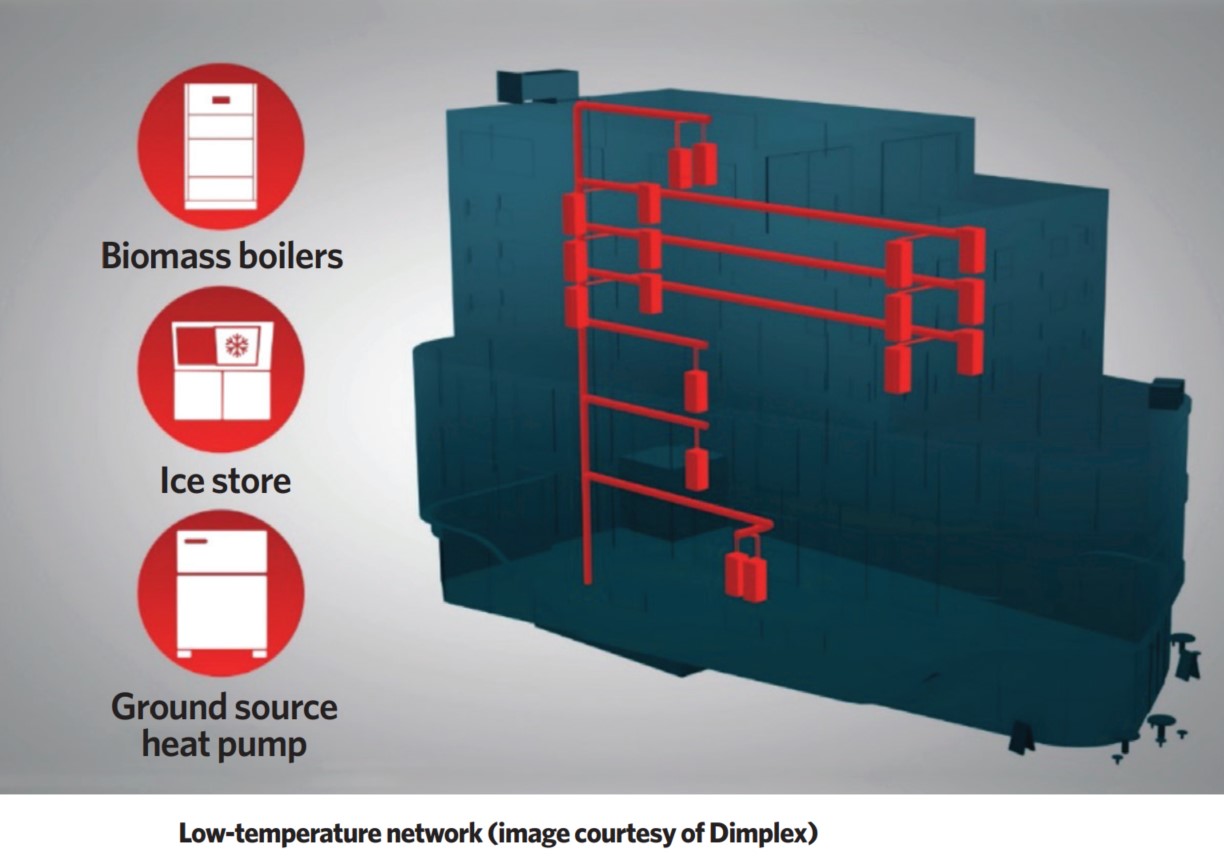 A feasibility study using waste heat from a supermarket chiller to heat housing via an ambient loop heat network has revealed higher costs than expected as a result of the use of ground source heat pumps in the design.

The analysis, by Martin Crane, director at Carbon Alternatives, found that the ambient loop had been designed more like a heat pump ground loop, because the available heat pumps are primarily designed for ground-source applications. As a consequence, the heat network design required larger pipes and more pumping energy to maintain the constant circulating flow required.

Crane says most of the source pumps in GSHP are either on or off, so – when the heat pump is operating part load – the source flow rates are as per peak demand, reducing flow diversity on the ambient loop.

The analysis found ambient loop network costs were higher because of the requirement for larger pipes, leading to the need for larger trenches.

A longer article based on this research will appear in September’s CIBSE Journal. The analysis is part of a feasibility study funded by the Heat Networks Delivery Unit and research funding from OxFutures.

DHW is also an issue, as heat pump systems require a local hot-water cylinder, unlike combi-boiler or DHN direct plate installations. Only 11m of the 26m UK residences are believed to still have a hot-water vessel. Implementing heat pump solutions would require their reintroduction, with corresponding space implications. The higher delivery temperatures to generate DHW also reduce heat pump efficiencies.

Until recently, most multi-occupancy developments in London were delivered with gas CHP-driven, high-temperature networks – but the decision to implement SAP10 carbon weightings as a consideration to planning has resulted in a significant shift to low-temperature and ambient shared-loop networks. This shows the effect of a small policy change where there is a competitive market for development. It is to be seen if similar policy changes can give the same impetus across the UK.

The integration of heat pumps into smart energy networks, where they respond more flexibly to demand signals within the grid system, offers potential operational savings and a useful grid service, but research on these impacts once heat pumps are adopted at scale is still to be tested outside a few isolated trials.

About the author
David Linsley-Hood is consultancy director at Locogen

The CIBSE ASHRAE Technical Symposium will be held online on 14-15 September. Register here.