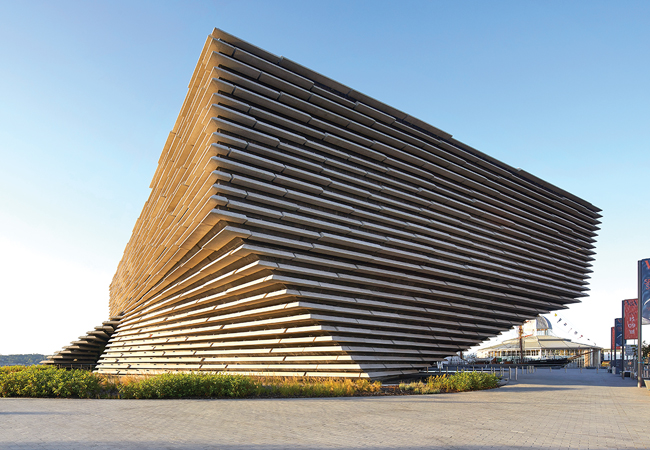 Situated on the banks of the River Tay, the V&A Dundee is a stunning new landmark for the Scottish city’s £1bn waterfront regeneration scheme. Its striking design makes a bold architectural statement, with a complex, twisted and folding, double-inverted pyramidal structure resembling the prow of a ship emerging from its dockside setting.

The building – covering 8,445m2 and featuring 1,650m2 of gallery space – was designed by Japanese architects Kengo Kuma and Associates, and is the V&A’s first foray outside of London. Clad with about 2,500 pre-cast textured-stone panels, its exterior evokes the rugged cliffs on the north-east coast of Scotland. Work on the museum began in 2014, with Arup providing the engineering design services and BAM Construction the main contractor.

You won’t see any levers or similar services-related openings in the main walls of the building – Wayne Butler, Arup

Arup produced a low-energy design by first examining how the need for mechanical cooling could be minimised. It analysed the potential cooling and heating loads before specifying the services, opting for a ground source heat pump (GSHP) for primary heating and cooling, backed up by air source heat pumps (ASHPs) on the roof.

Such a highly aesthetic, architect-led design demanded that the services be hidden – but this presented a challenge to the engineers. With the concrete fabric of the building being structural, there was little scope for services penetrations and limited space for plant.

‘We had to be very careful how we distributed services,’ says Wayne Butler, effectively Arup’s project manager on the scheme, and in charge of the design of the mechanical services systems. ‘The inclined walls are held in place by structural trusses or concrete walls within the building, so we were limited in where we could position penetrations.’ (See panel, ‘Coordinating the design through BIM’.)

The architects also had clear ideas about the building’s interior and wanted to eliminate the type of access panels often seen in plasterboard ceilings or wall panels. ‘You won’t see any levers or similar services-related openings in the main walls of the building,’ says Butler.

After a study into low and zero carbon technologies, the Arup team specified ground and air source heat pumps for Dundee V&A. Thirty, 200m-deep boreholes were created for two 225kW GSHPs and these were supplemented by two 50kW air source heat pumps on the roof – to cater for potential future changes in heating and cooling demands – plus a 20kW domestic hot water heat pump, which produces water at 60°C. The combined systems provide 800,000kWh of heating and 500,000kWh of cooling per year. The technologies were selected on the basis of three criteria: compliance with Building Regulations; contribution of Breeam credits; and payback.

Open-loop source water heat pumps were considered at the design stage, says Butler, but once it was decided to move the building onto the riverbank it became technically easier, and more cost-effective, to go for GSHPs.

To size the equipment correctly, Arup did a profile analysis of potential imbalanced loads between heating and cooling over the lifetime of the building. Based on this, a performance brief was given to specialist heat pump contractor GI Energy to supply the plant that would satisfy heating and cooling requirements.

How the V&A docked in Dundee

Built at a cost of £80.11m, the V&A Dundee building was initially supposed to emerge from the River Tay itself.

After reconsideration of the design, however, this was revised to an onshore, infilled docksite berth – although the ‘prow’ of the roof still protrudes 19.8m over the water, beyond the footprint of the museum.

Situated next to the moored RRS Discovery, the V&A Dundee is now one of the city’s major attractions, enticing 27,201 visitors during its first week and more than 100,000 since its opening on 15 September 2018.

The museum’s two galleries each require independent air conditioning, temperature and humidity control. Both are fitted with recirculation handling units providing heating and cooling, plus desiccant dehumidification and steam humidification.

‘They work on a variable air volume (VAV) basis,’ Butler says, ‘so we have VAV dampers to control the air; they shut off a bank of diffusers in part-load conditions rather than reduce the flowrate to each, so the air from an active diffuser is at constant volume, creating good air mixing. This means we can guarantee a fixed amount of air from each diffuser and create the correct mix to give a consistent temperature and humidity throughout the spaces.’

Each gallery has three temperature and humidity sensors; if one drifts out of calibration, an alarm is triggered

Carbon dioxide sensors ensure there is enough fresh air for occupants. The museum goes into full recirculation mode at night, thereby saving energy by not having to heat incoming fresh air.

The system has built-in redundancy. For instance, each gallery has three temperature and humidity sensors to compare the measured data; if one drifts out of calibration, an alarm is triggered and the system continues to operate based on the reading of the other two sensors. This allows the operator to replace or recalibrate the faulty sensor.

The building’s main hall is naturally ventilated, while underfloor heating delivers most of the heating requirement. There is also some fan-assisted heating where glazing is deployed, such as in the restaurant and at the feature window that overlooks the Tay at ground-floor level. The architect wanted to avoid shading or blinds for the west-facing restaurant window overlooking the river. To ensure the space did not overheat through solar gain, Arup carried out a thermal analysis, which resulted in the selection of radiant floor cooling and solar control glass with a G value of 0.42.

Multifunctional conference and classroom spaces in the building are linked to a common air handling unit. The Trend building monitoring system measures CO2 and can increase air volumes depending on the number of people in the space.

The V&A’s structural design is complex, with curved concrete walls locking together with limestone flooring to offer inherent stability and strength to the building. As a result, the engineers were limited in where they could position the services, so BAM and Arup used 3D BIM modelling and analysis tools to coordinate design and installation.

‘All our services were fully coordinated in our 3D model, which the contractor had access to when generating their installation drawings for the buildings,’ says Butler, who – together with a building services technician with a background in structural engineering – coordinated the services live in the model.

‘As the specialist service contractor started to develop its coordinated installations drawings, workshops were held to walk them through our model and answer queries,’ he adds. ‘We then migrated onto their model, and they would show us where they’d modified the routing to ensure it wasn’t contravening the rules or creating coordination issues.’

The services strategy was developed early in the process. Workshops with architects helped to ensure any services hidden for aesthetic reasons could still be accessed by maintenance engineers. ‘For example, there are services cupboards where the isolation valves to each toilet suite are in a cleaner’s cupboard rather than in the spaces above the ceilings, to avoid ugly access panels,’ says Butler.

Joint workshops were also held with the client’s facilities management staff, to familiarise them with how the building could be serviced and maintained. Small amendments to the design were made, such as changes to the fire-detection alarm systems and how they were accessed. Similar workshops were held later in the project to address the building management system configuration and requirements. 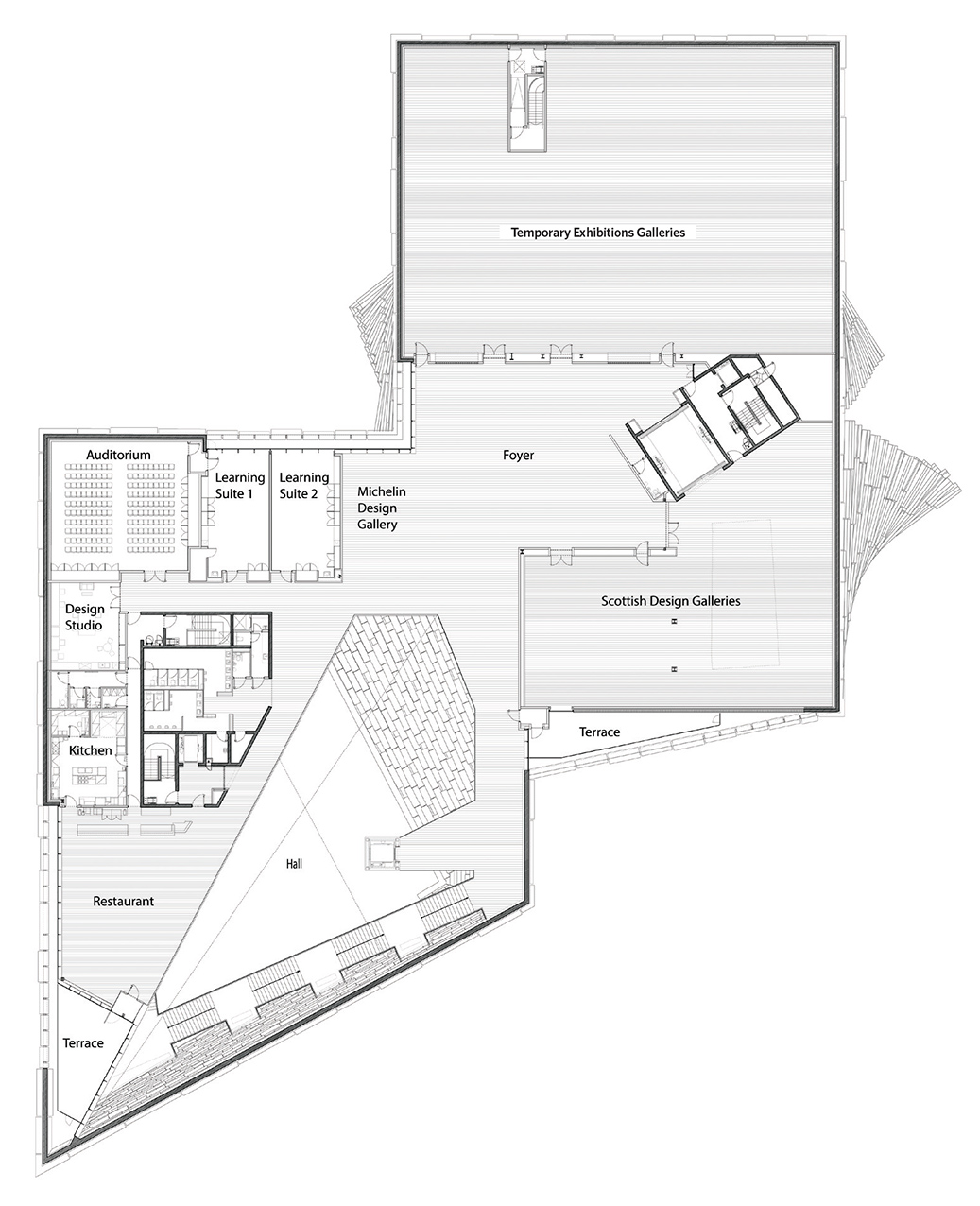 The V&A Dundee has only been in public operation since September, so detailed, meaningful performance data for the building has yet to become available. With the museum capturing the public’s imagination, visitor numbers have also been much higher than baseline projections – potentially skewing initial performance indicators.

As a relatively early BIM project, however, the V&A has provided plenty of data and experience for the Arup design team, enabling the organisation to develop its BIM skills and capability. Butler says the 3D imaging and virtual reality allowed the V&A to become more engaged in the project.

‘It’s always useful to come from a client’s perspective and understand what their drivers are,’ he adds.

The objective was to emphasis daylight, architectural integration and sustainability. Arup used computational modelling to analyse weather data and the sun’s path to develop a daylight strategy with the architects. No direct sunlight was allowed to enter the galleries.

Façade openings giving good levels of daylight at the edges offer views out to the Tay and the city. Deeper into the building, a series of large-diameter Solatubes, which sit just above the perforated ceiling, let high levels of light into the restaurant and main hall.

For temporary galleries, north-facing skylights were integrated into the roof system to bring in natural light. An adjustable, blackout shading system allows modulation of the incoming daylight to meet exhibition conservation requirements.

Track-mounted projectors, equipped with high-colour-rendering LED, were carefully aimed and focused to model and reveal the exhibits in the galleries.

In the Charles Rennie Mackintosh Oak Room, in the Scottish design galleries, the light quality of the original space has been reproduced using original glass fittings and concealed, LED light sources.

At night, an array of small windows built into the linear façade allows interior lighting to ‘glow out’. Uplights mounted in the reflecting pools surrounding the V&A illuminate the exterior to reveal the complex forms and texture of the stone façade.