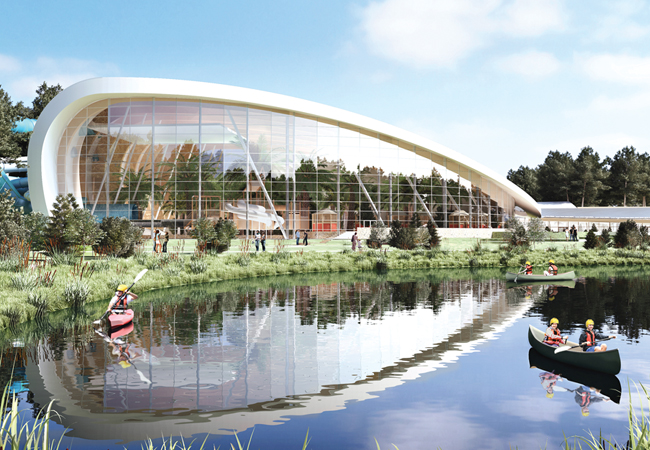 Short-break operator Center Parcs’ first development in Ireland is the 160-hectare Longford Forest resort, currently under construction near Ballymahon, County Longford, Ireland. Scheduled to open in 2019, it will cater for up to 2,500 guests, in 466 luxury lodges and 30 apartments nestled in woodland.

At the heart of this huge development is a 21,500m2 leisure and retail plaza. Built around an open courtyard, it will house most of the restaurants, bars and leisure facilities, as well as the vast, enclosed complex of pools, rides, slides and rapids – the ‘Subtropical Swimming Paradise’ in resort speak.

Creating a holiday destination in woodland, in the heart of rural Ireland, is quite a challenge. ‘We’re effectively building a mini-town in a forest,’ says Daman Ranby, director of Edmond Shipway, the project’s mechanical and electrical consultants.

The task for Edmond Shipway was to develop a robust, efficient servicing solution. Having worked as technical adviser to Center Parcs on some of its previous projects, including the recently completed Woburn Forest development helped. ‘Center Parcs is an end-user client, with very high standards, that will be running this resort for many years to come,’ says Ranby. 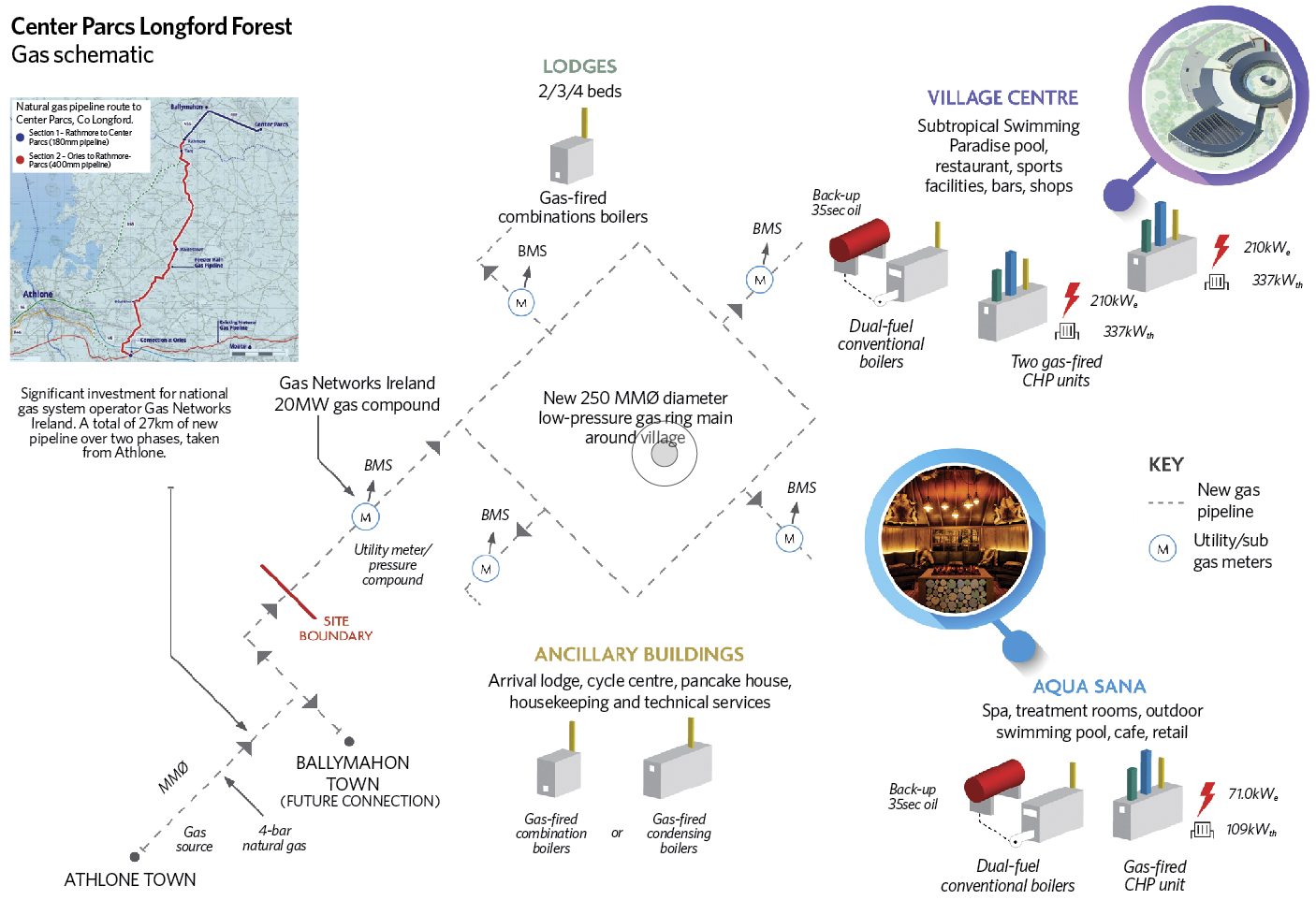 Servicing requirements for the luxury lodges are relatively straightforward: each is provided with drinking water, gas, data, electricity and sewerage connections. However, the lodges are scattered throughout the wooded site, so the service routes had to be carefully designed to optimise connection lengths and resilience.

The lodges are Center Parcs’ latest design, developed, evolved and prototyped, and trialled at its other UK resorts before being rolled out in Ireland. They have been designed to exceed the minimum standards required to comply with Irish Building Regulations – for example, the air permeability of a typical lodge is 3m3.h-1 per square metre at 50Pa. 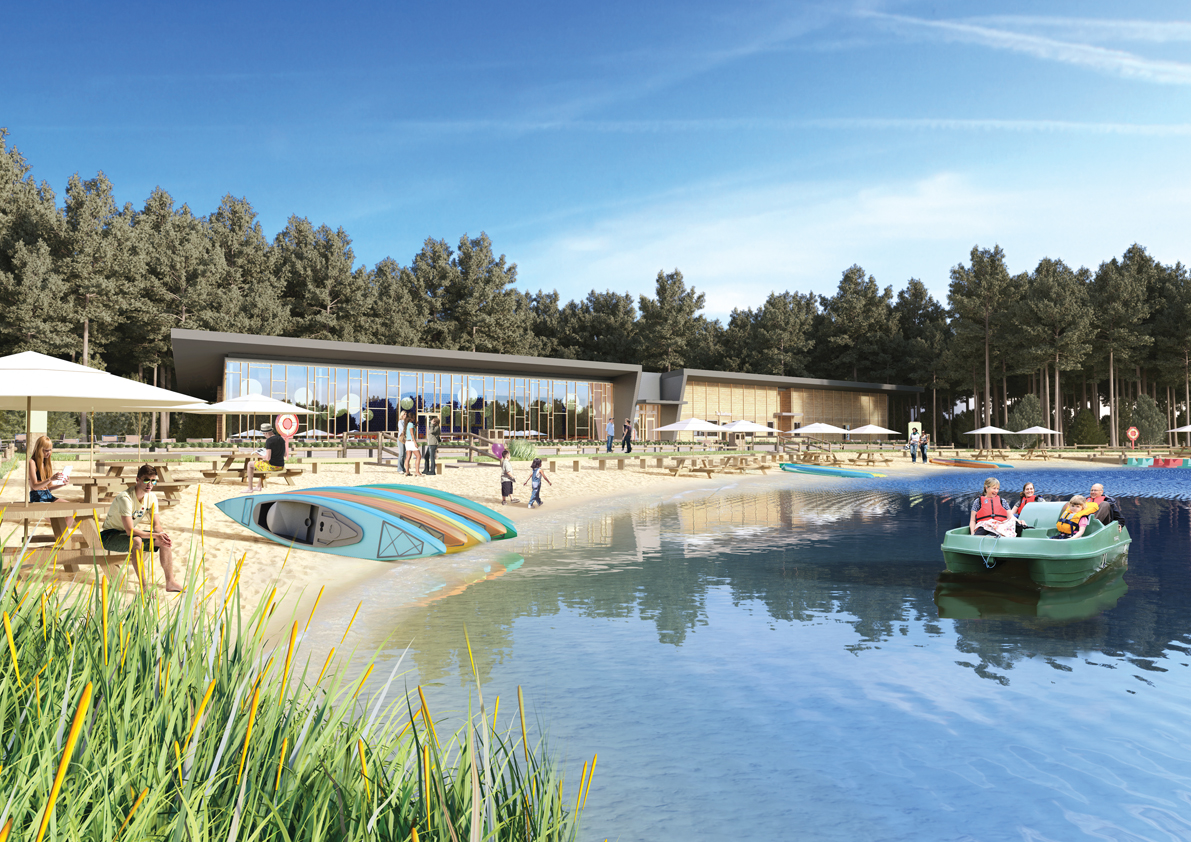 Meeting the renewable energy requirement was a challenge. The lodges’ wooded location meant roof-mounted photovoltaic and solar thermal panels could not be used. ‘The panels would have been shaded by the trees and covered in pine needles,’ says Ranby.

Micro domestic combined heat and power (CHP) units were also considered, but deemed too expensive compared with a standard domestic gas boiler – and the ongoing maintenance of 466 CHP units was a ‘real concern’, says Ranby.

The solution is to heat each lodge using a wood-burning stove with top-up space heating. All hot water is supplied by a gas-fired condensing combination boiler. According to Ranby, the wood burner counts towards the renewable requirement, with the remainder offset by renewables used in the main leisure facilities. ‘Building control was happy for us to offset the lodges’ renewables obligation with renewables in the central facilities,’ he says. 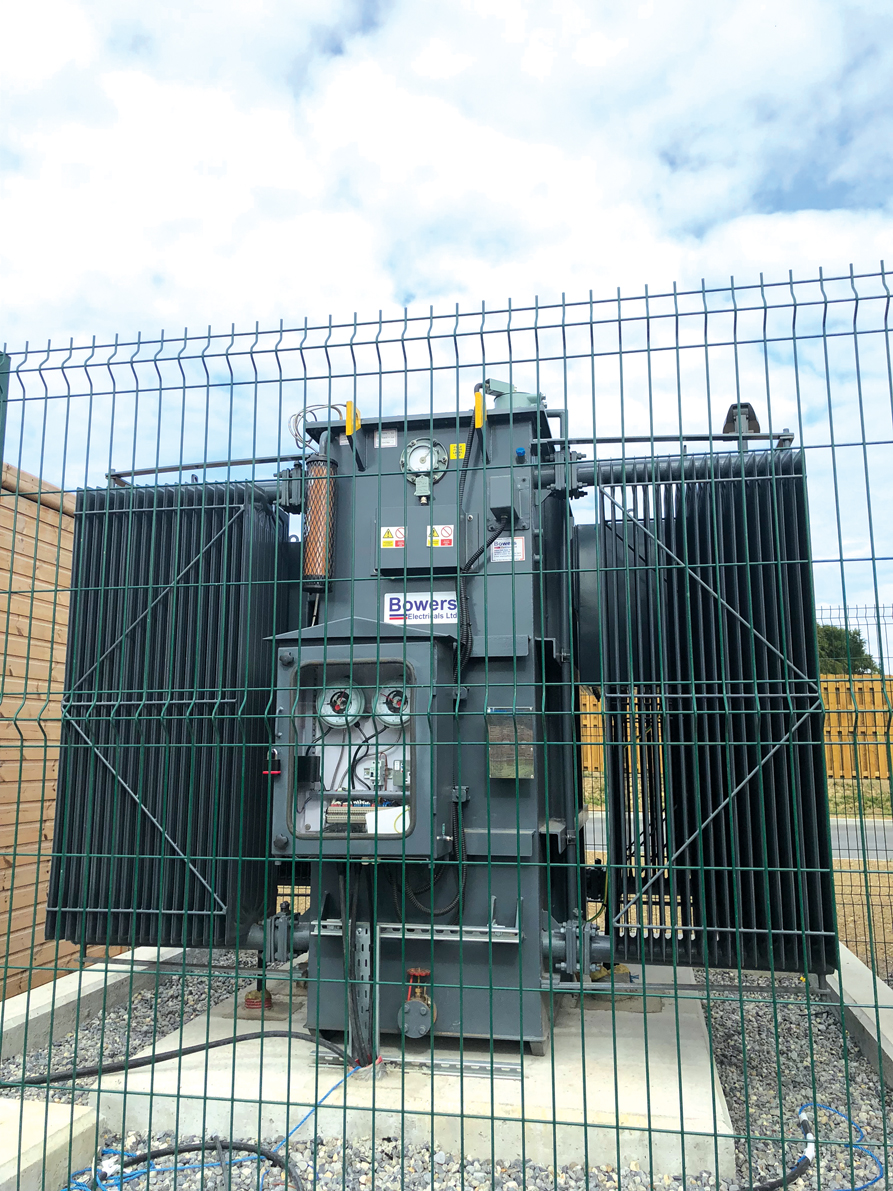 Heat and power for the central facilities are supplied by two 300kWth gas-fired CHP engines for the leisure and retail complex, and one 100kWth gas-fired CHP engine for the spa complex. This low carbon technology was accepted as a suitable offset for the absence of renewables on the lodges; the expected carbon savings from the CHPs are predicted to exceed the carbon savings that would have accrued from the lodge-mounted PVs.

‘The thermal base load for the leisure and retail complex is approximately 700kW, and both engines will run for about 20 hours a day – and one 300kWth unit will probably run for 24 hours, to meet the continuous heat and ventilation demand from the Subtropical Swimming Paradise,’ says Dean Maude, senior mechanical engineer at Edmond Shipway.

The low-temperature hot water total heat load for the retail and leisure complex is 7.5MW, which includes heat for the pools, mechanical ventilation systems and domestic hot water.

Top-up heat is provided by five 1,500kW dual-fuel gas/oil-fired boilers. The fuel oil connection provides resilience in the event of a gas supply interruption. There is no minimum renewables requirement under Part L of the Building Regulations for commercial buildings in Ireland.

The enclosed swimming complex is at the centre of the resort. It will be maintained at 31°C and 60% relative humidity to create a balmy environment for up to 1,500 holidaymakers and the 2,335 lush, green tropical plants and trees that will festoon the space. ‘The main draw on energy is the heat and ventilation load for the pools,’ says Maude.

The size of the pool complex – and factors such as airborne water and chlorine, as a consequence of the water slides, water jets and wave machines – mean that the calculated ventilation rate for the space is approximately 40m3.s-1, which equates to about four air changes per hour. 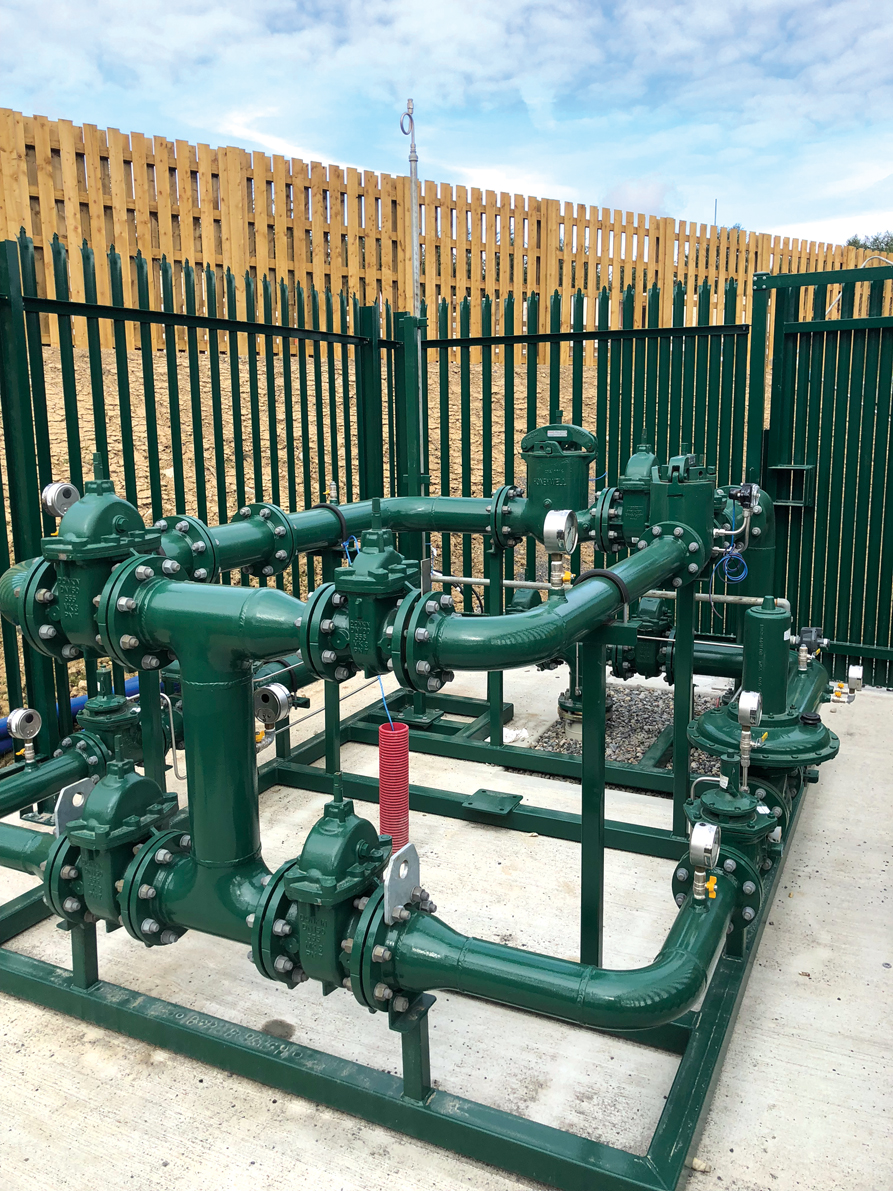 The three dedicated air handling units are capable of delivering 60m3.s-1 to offer resilience and incorporate a margin for future changes to the pool facilities.

‘We had to use CFD modelling to develop the design because the tropical plants are very vulnerable to air movement,’ explains Maude. ‘We’ve made extensive use of fabric ducts and employed nozzle diffusers to supply high volumes of air over a long throw, so as not to disrupt the planting.’

The resort and its leisure facilities are open all year round, so ensuring heat and power are always available is a fundamental requirement. ‘One of the biggest challenges has been getting utilities to site,’ says Edmond Shipway’s Ranby.

The 3,000kVA import capacity electrical supply to the resort is delivered through infrastructure with capability of 8,000kVA via nine 10kV to 400V substations. These are strategically positioned around the site: one feeds the pool area and central building west; one feeds the central building east, including other facilities in the restaurant/leisure complex; and the remainder are dotted around the site, to feed power to the lodges and spa.

‘The high number of substations is a function of how long the low-voltage cables can be before it becomes cost effective to put in a transformer; we have around 6,000m of 10kV cabling alone,’ says Ranby. 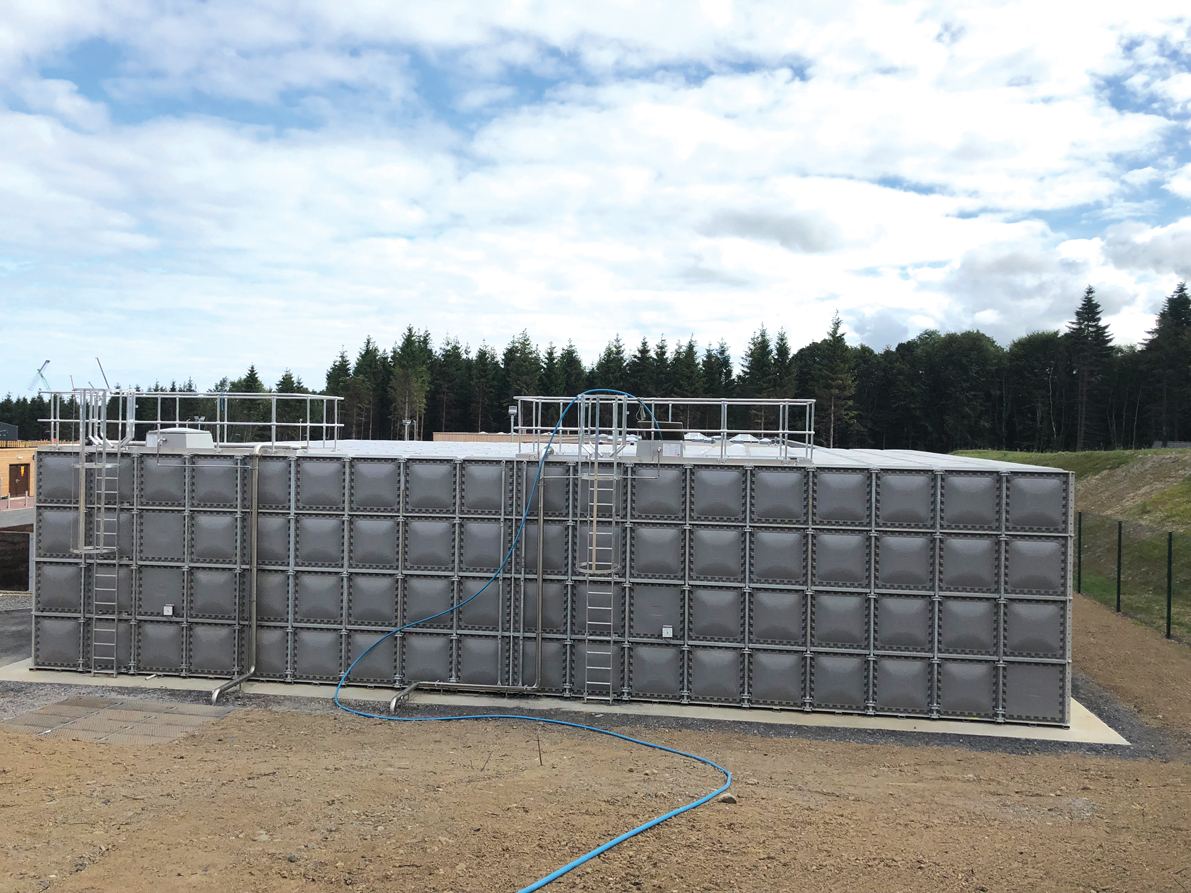 A tank on site stores 1,000m3 of water in two compartments

Power is supplied from a primary substation, located approximately 12km away, by a cable that has been run overhead and underground. ‘We’ve had to upgrade a primary substation and negotiate with the various landowners to bring this cable across their lands,’ explains Ranby. The supply went live at the end of July and is now powering the construction site.

Data is via high-speed fibre, which has been routed 7km from Ballymahon. ‘The biggest utility challenge was providing gas, because there was no supply available anywhere near the site,’ says Maude. In fact, there was no gas infrastructure anywhere in County Longford.

Gas is the primary fuel source for the project, which has a peak demand expectation of 14MW. To meet this, Gas Networks Ireland has installed a new 27km, 400mm diameter, 4-bar, medium-pressure main from Athlone to the site, at a cost of €4.5m. The new main is sized to deliver 20MW to allow for the resort’s future expansion; it also incorporates connections to the nearby town of Ballymahon and several local villages, with the potential to link them to the gas network for the first time. On site, the gas is distributed under low pressure via a 250mm diameter ring main.

Maude says the team looked at other primary fuel options for the resort – including liquefied petroleum gas (LPG) and oil, both of which are common fuel sources in Ireland – but the logistics of maintaining the fuel supply ‘made no sense’.

The team also considered biomass, which has been used successfully at Center Parcs Woburn Forest. ‘The tariffs on renewable heat are not in place in Ireland, so it was a pure capital outlay and – in our view – the long-term prospects of burning wood, and the pollution it creates, is questionable,’ adds Maude.

The only utility connection that did not have to be brought any great distance was water, because a 200mm water main was already in place next to the site. Average daily consumption for the resort is expected to be about 450m3 of water per day, with a peak of 750m3 per day in summer. ‘Center Parcs has five UK resorts, so we had a lot of historic data that we could use in determining water use,’ says Maude. 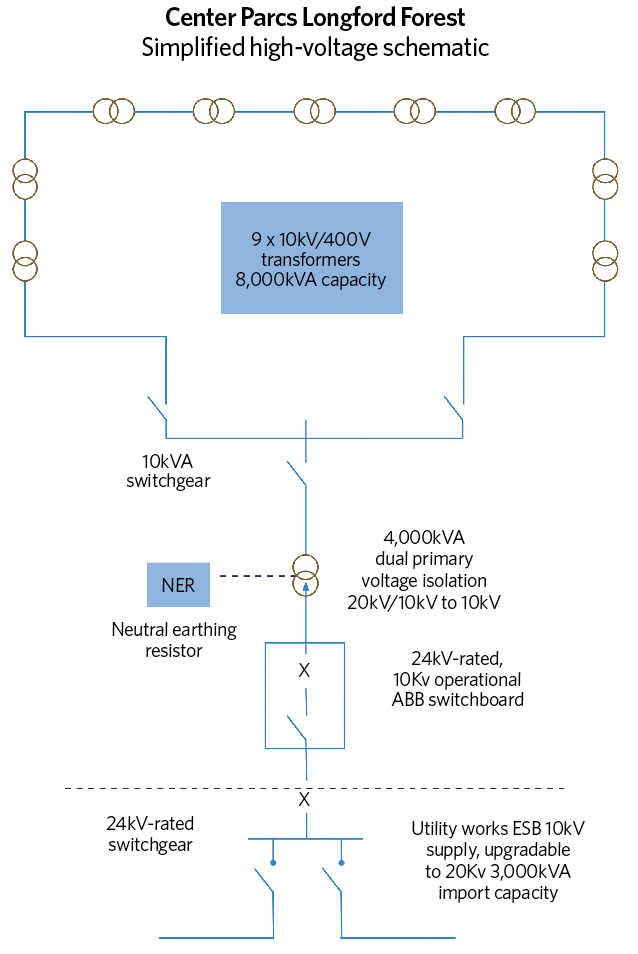 Electricity substations are dotted around Longford Forest and there is around 6,000m of 10kV cabling

In addition to wholesome water, Edmond Shipway’s design has to cater for firefighting. ‘If this was a single building, you’d have a wholesome water main and a separate fire main – but it’s not a building; it’s a small village spread out over a large site,’ says Maude. ‘We’ve used a combined water and fire main – the same way a utility supplier would pipe up a town.’

Even as a combined fire and wholesome system, Maude estimates there are about 10 miles of pipework.

The site has 1,000m3 of water stored in a tank comprising two 500m3 compartments. This is based on 750m3 for peak daily summer use and 250m3 for firefighting. ‘We need to maintain a reserve for fire-hydrant use and storage for the sprinkler system in main buildings,’ says Maude.

The tank also helps take pressure off the local water infrastructure because the site’s peak flow rate of 17L.s-1 mains connection is insufficient to meet peak demand. There is no wastewater connection to the site. ‘The connection cost for foul drainage was far too high,’ says Ranby. Instead, up to one million litres of wastewater a day will be treated in the site’s own treatment plant, where it will be cleaned and purified before being discharged into local rivers.

Center Parcs Longford Forest is set to open in 2019, at which point the mini-town in the woods will become Ireland’s newest luxury holiday resort.