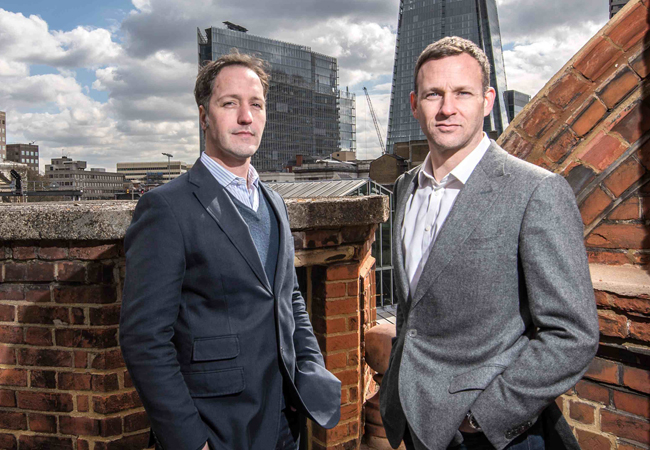 Heat networks are the big nut to crack in the UK,’ says Casey Cole, managing director of Guru Systems. He should know. His company has been monitoring 30 residential heat networks in the UK, and data has revealed a number of issues preventing their efficient operation.

‘There is a whole lot of pain, from a whole lot of projects,’ says Cole. ‘We hadn’t appreciated quite the extent of the problem until data from meter readings started to flow out of these sites. We then saw how bad the performance was on the majority of them.’

Casey Cole and co-founder Gareth Jones call themselves disrupters, and are using big data to challenge the ‘business as usual’ approach in the industry. The Guru Pinpoint data analysis software is exposing flaws in the design, installation and operation of heat networks, and its sister company FairHeat, where Gareth Jones is managing director, is using the analysis to help operators overcome issues by optimising the networks with a series of fixes, or ‘interventions’. Cole is keen to point out ‘the technology is not the problem’. He says good performance is possible and, with minor tweaks, performance can be dramatically improved. ‘It’s not about spending more on projects,’ says Cole. ‘You can spend less and get a better result.’

It is a crucial time for heat networks in the UK. The government is backing district heating as a key low carbon source of heat, and, in the last Budget, £320m was committed to heat networks. It is a great opportunity for the industry, but the government will only stay faithful to the technology if it can prove it is a viable alternative to traditional sources of heat.

So what are the reasons for apparent poor performance uncovered by Guru Systems? Jones list his top five in the panel opposite. Issues such as poor commissioning, bypasses left open and absent pump controls are not new and Huw Blackwell spelled many of them out in his ‘Foiling the great escape’ article, CIBSE Journal, August 2013. CIBSE and the Association of Decentralised Energy have also published a Heat Networks: Code of Practice outlining the issues and explaining how to optimise design.

Jones says part of the reason systems don’t perform is because clients don’t know what to ask for. ‘Developers and housing associations are being forced into taking on the role of a utility company because of regulations or planning requirements. They didn’t necessarily want to go down that route and they lack experience,’ he says. 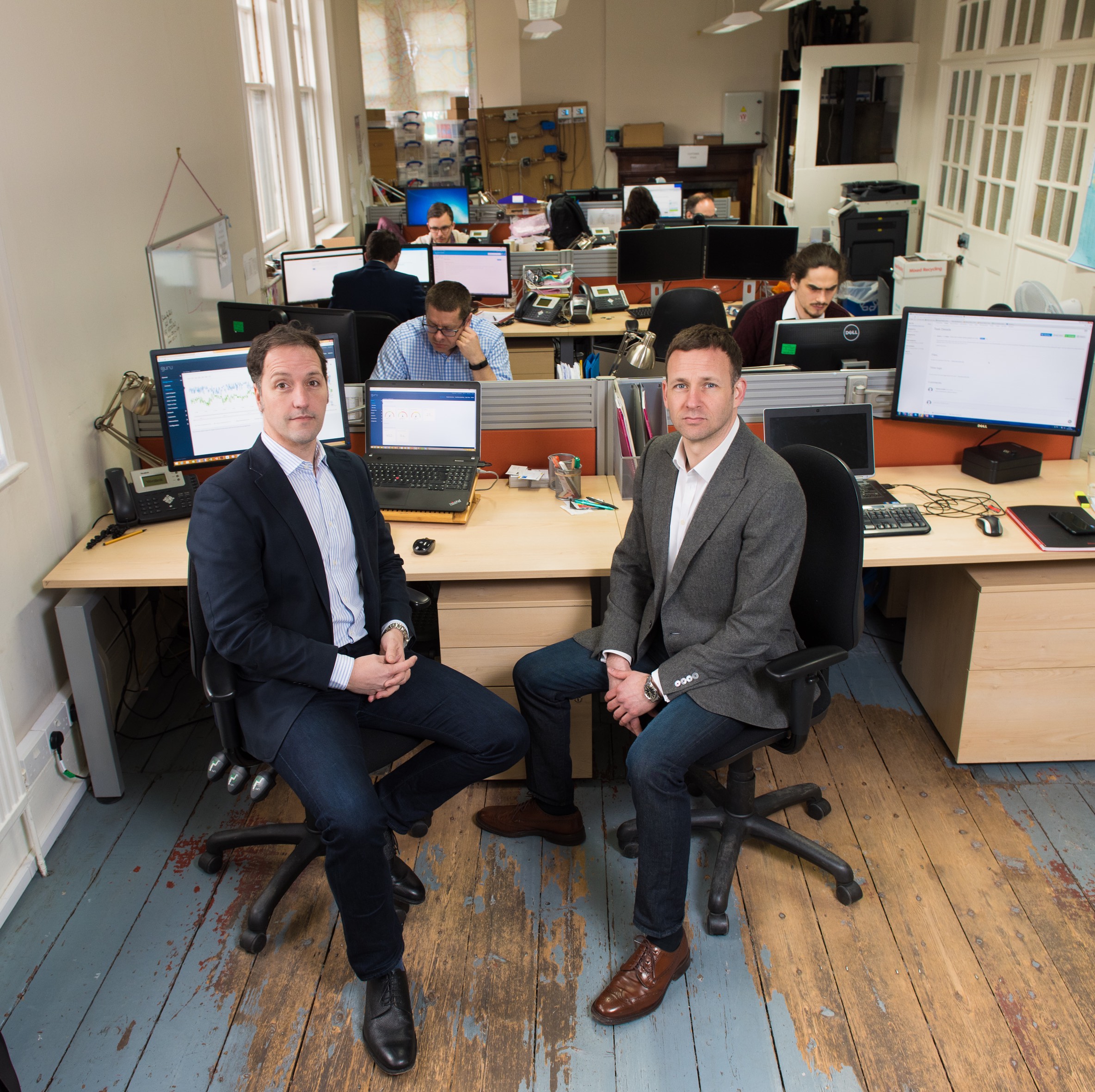 Cole believes there are two risks for landowners operating heat networks. First, there is a debt risk, where tenants may not pay for the energy and, second, the risk of hidden inefficiency in the system. So, if they have based tariffs on good performance and there are issues with operation, ‘they can end up haemorrhaging money for a long time,’ according to Cole.

Before creating Pinpoint, Guru Systems launched a pay-as-you-go billing platform that allowed operators and occupiers to see energy usage. It was when they checked the meters were working correctly that they discovered how many had been wrongly positioned or were not working. ‘About 10% of the meters weren’t reporting properly, or the probes were not put in, or were back to front,’ says Cole. ‘There may have been commissioning certificates, but they were worthless.’ After they had been reinstalled correctly, the performance gaps in the systems became evident.

The pair found themselves ‘soaking up time’ explaining the issues to clients, which made them wonder whether a platform could be created to allow operators to interrogate data themselves.

‘The idea was to shorten the time it takes to access data to seconds, so you can see how the system works immediately. We wanted to make it accessible for financial directors, facility managers and MDs,’ says Jones.

The result was a web-based visualisation and analysis tool, which could accept data from smart meters, data loggers and BMSs. A DECC Small Business Research Initiative (SBRI) grant made it possible.

Key to the project is the inclusion of data from flats and plantrooms. As well as data on the volume of gas used by the power plant and power consumed by pumps, sensors for flow temperature, return temperature and flow rates in flats are included so that Pinpoint has visibility of any problem in tenants’ properties, for example open bypasses or poorly commissioned heat interface units (HIUs), which are used to provide hydraulic separation at property boundaries.

Pinpoint lets interventions be loaded in the system, so it learns what the remedies are for root causes of inefficiency. It trains machine-learning algorithms to recognise patterns, and come up with possible interventions. Guru Systems has also included costs of interventions to help clients with decisions.

A big issue around collecting data was gaining the trust of operators who wouldn’t normally share data for commercial reasons. The firm also had to made sure data taken from individual flats was secure.

Guru Systems asked the Open Data Insitute (ODI) to advise it on what should be kept private and what could be shared; ISO27001 Information Security Management was followed to ensure systems were protected.

‘Data is so valuable that we can’t risk personal data. We’re being rock solid on this. Operators can participate without fear of giving away anything personal or sensitive,’ says Cole. Client data sits on the platform but they can ask for it to be deleted at anytime.

The two pieces of data that underpin engineers’ sizing calculations are peak demand per flat and the diversity factor (which allows for the fact that residents won’t call for heat at the same time). The data is combined on diversity curves, and shows the results of 40 million real-time data readings across 2,000 dwellings (see Figure 1). 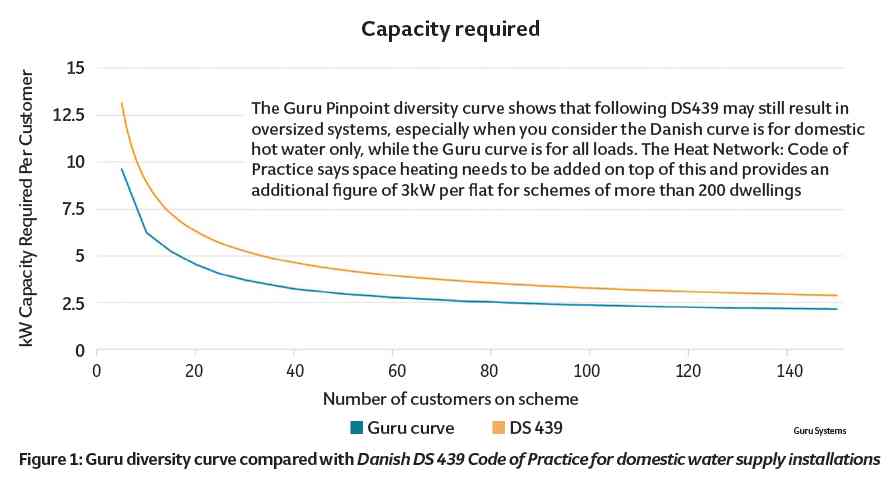 Figure 1:The Guru Pinpoint diversity curve shows that following DS439 may still result in oversized systems, especially when you consider the Danish curve is for domestic hot water only, while the Guru curve is for all loads. The Heat Network: Code of Practice says space heating needs to be added on top of this and provides an additional figure of 3kW per flat for schemes of more than 200 dwellings.

UK engineers can now compare their scheme to these diversity curves to ensure any system designs are sized appropriately.  If the Guru curve is representative of heat network schemes in general, it suggests that the curve in the Code of Practice will need revising downwards. Engineers need to be very careful: not that their designs are capable or meeting peak load, but that they’re capable of meeting the small base loads where the systems will spend most of their time.

Oversizing is the biggest and most common design problem for networks. This results in capital budgets being wasted on plant, pumps and pipework that are larger than necessary. It also restricts the peak efficiency of the resulting network for the rest of its service life. Oversized pumps can’t modulate down to the low flow rates required, as they drive more water round the primary circuit and force up return temperatures. Central plant, unable to track low loads, will also charge in and quickly have to switch off, resulting in inefficient operation and spiky temperature outputs. Over-large pipes in an oversized system will also lose additional heat. 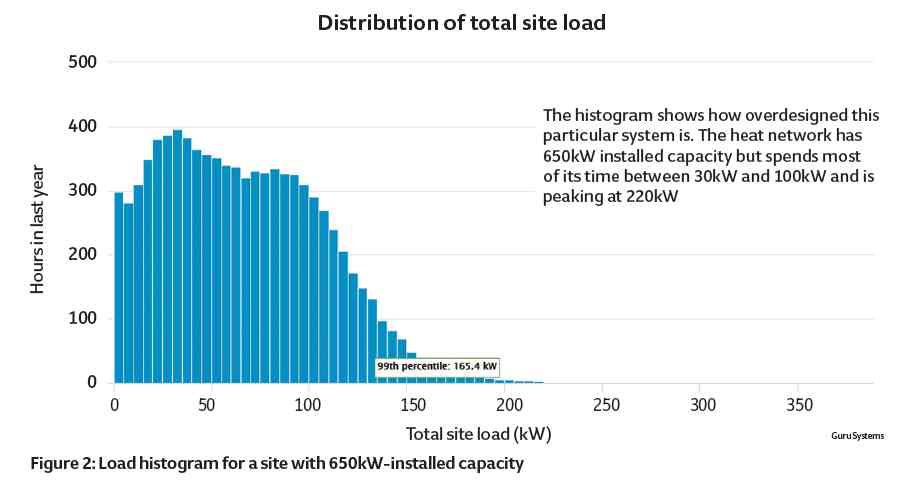 Figure 2: The histogram shows how overdesigned this particular system is. The heat network has 650kW installed capacity but spends most of its time between 30kW and 100kW and is peaking at 220kW.

Guru Systems piloted Pinpoint on three projects, including a 115-unit housing association scheme. A survey of the data revealed mid-level losses, and 70% were found to be from the corridor to the HIUs. It was found that the flow and return had similar losses, when the return should have been lower. The problem was a lack of insulation on pipework leading to the HIU – the terminal branch – and faulty HIU valves, which were damaged by high flow rates in the system caused by oversized pumps.

After rectifying the issues, network losses were reduced by 68% and the tariff cut from 7.7p to 3.8p per kwh. Once the terminal branch was insulated, corridor temperatures also fell. The cost of interventions had a two-year payback.

FairHeat is now working with CIBSE and ADE to incorporate metrics into the Heat Networks: Code of Practice. These have been derived from measurable targets developed by FairHeat for its clients.

‘There is a precedent in Passivhaus, as everyone knows what has to be achieved; you pass or you fail,’ says Cole. ‘We have a performance gap in services – we are addressing this gap in district heating.’

The performance metrics have been handed to CIBSE and ADE, and could be incorporated in the Code of Practice to check the heat network at every stage of the procurement process from feasibilty through design to the commissioning phase.

However, there is a long way to go before measurable targets based on real data can be drawn up for the entire industry. Non-domestic district heating schemes are not yet being measured, nor is the pipework in the street. Jones and Cole are keen to do the work.

They are both optimistic targets will be incorporated into the Code of Practice and work the same way Passivhaus has in eliminating performance gaps. Jones believes the commercial imperative will drive change.

‘Projects held to measurable targets actually work better and cost less,’ he says. Up until now, Jones says, there has been no commercial incentive to design, install and build systems that perform well. ‘Now clients are desperate for measurable targets they can hold project teams to’.

1. Open bypasses – it seems that every scheme we look at has bypasses left open somewhere in the network. Often these represent a significant portion of total network flows. As a result, return temperatures are much higher than they should be, leading to high losses and ancillary issues (such as inability to operate CHP)

2. Missing insulation, particularly on the terminal run from the laterals into the flat. This is a major contributor to losses and overheating in flats and corridors

3. HIUs not commissioned or poorly commissioned. In particular, DHW and/or space heating temperature set points are too high. This results in high return temperatures and, in some cases, can lead to the HIU effectively acting as a bypass in the system

5. Poor (or absent) pump controls, resulting in pumps operating at full capacity. In combination with open bypasses, this can result in the whole network operating with close to a 0°C delta-T and very high pump electricity costs.