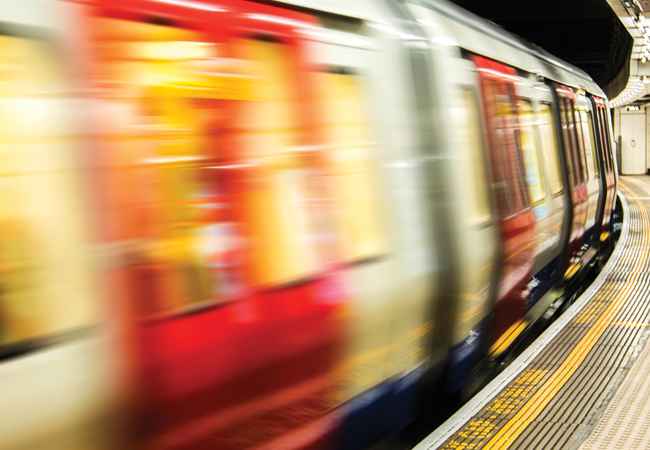 What would you do with 500GWh of heat a year? Transport for London (TfL) is looking to building services engineers and developers to provide it with some answers to this very question, because that is the quantity of heat produced in the tunnels and stations of the London Underground each year. And it is the amount of heat that TfL would like removed from the Tube to prevent it from getting any warmer and to make journeys more comfortable for the five million passengers a day that use the system.

Making use of this secondary heat will also help TfL to meet the London Mayor’s objective, outlined in the draft Environment Strategy, to ‘develop clean and smart integrated energy systems utilising local and renewable energy resources’.

One way of achieving this is for building services engineers to come up with schemes to redirect this heat to nearby buildings and developments. ‘TfL has been evaluating waste-heat utilisation at a number of locations; however, the next step is to engage with external stakeholders,’ says Sharon Duffy FCIBSE, head of transport infrastructure engineering at TfL.

To understand how and where this heat is available, it is first necessary to know how it is created.

Keeping the London Underground cool in summer is a growing challenge, particularly on its deep tunnels serving the Piccadilly, Central, Northern and Jubilee lines. Many of these tunnels were constructed more than 150 years ago, through the thick layer of London Clay present beneath the city.

There are two types of tunnel on the Underground – ‘deep Tube tunnels’ and older ‘sub-surface lines’, which run just below street level in ‘cut and cover’ tunnels. Keeping sub-surface lines cool is less of a challenge; steam trains originally ran on some of these, so they are larger than the deep Tube tunnels and constructed with plenty of openings, through which smoke could escape. As a result, London Underground has been able to fit air conditioning units in its new S-stock trains on the sub-surface lines, because the openings allow waste heat to be vented away.

On deep Tube tunnels, however, London Underground is having to search for more creative cooling solutions. ‘The kinematic envelope is so tight that there is not much space to put air conditioning on the train,’ says Duffy. There are also very few openings through which to vent heat.

When the deep tunnels were first dug, cooling was not an issue; tunnel temperatures were a very temperate 14°C, the same as the surrounding ground. This fact was exploited by London Underground’s marketing team in a 1926 poster, which had the banner ‘It’s cooler below’ and the caption ‘The Underground’s the only spot for comfort when the days are hot’.

These days, the reality is strikingly different, with some sections of the Central and Bakerloo line tunnels recording temperatures of more than 30°C. ‘The clay has acted as an effective heat sink, absorbing a lot of the heat generated by trains running year on year,’ explains Duffy.

About 21% of the heat generated by the trains is aerodynamic drag and friction; a further 21% comes from the electric motors, drive and auxiliary systems, with about 2% generated by passengers. By far the largest proportion of heat, 50%, comes from the trains slowing down – the process of converting kinetic energy into heat simply by applying the brakes. ‘A Tube train pulling into a station will give out about 350kW of heat,’ says Duffy. (See thermal photos.) 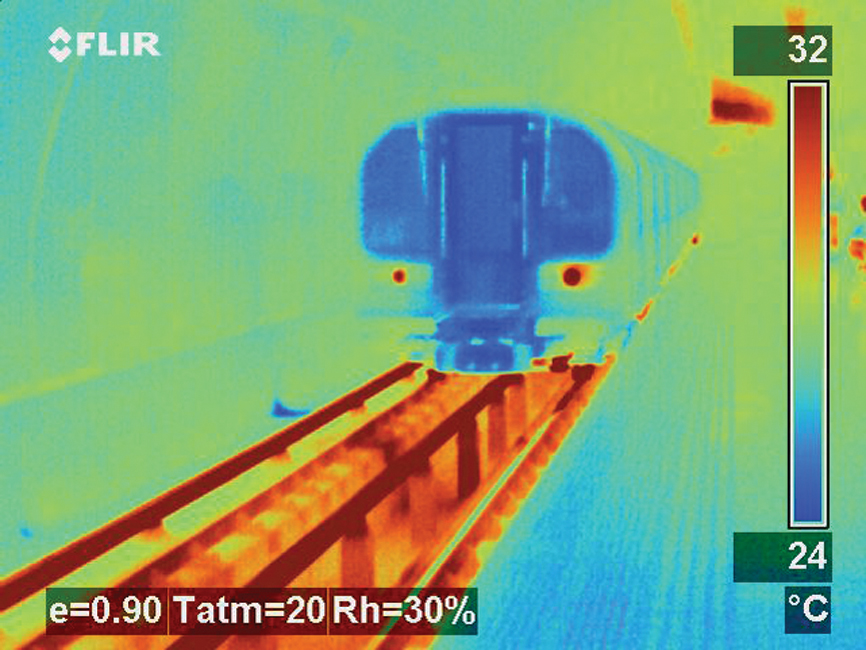 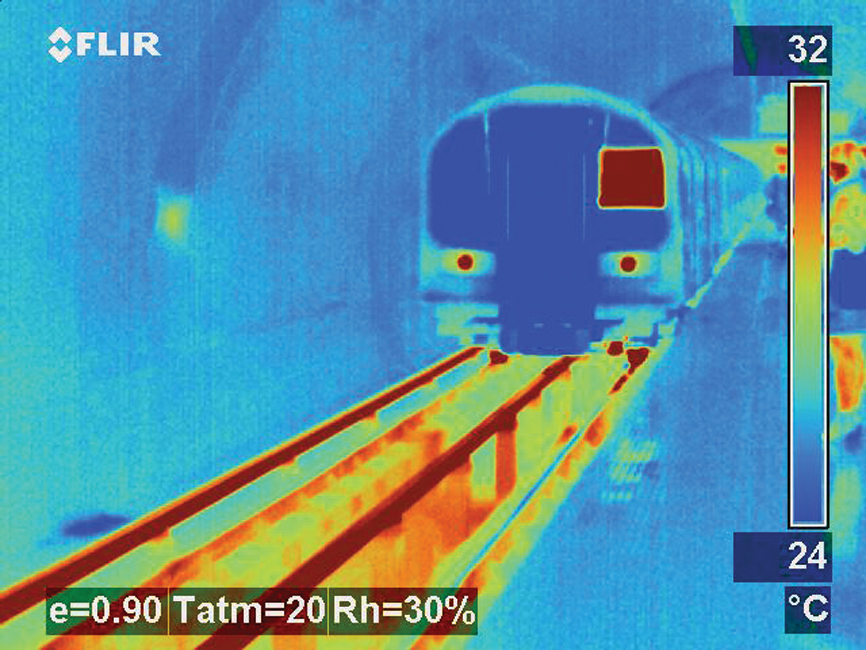 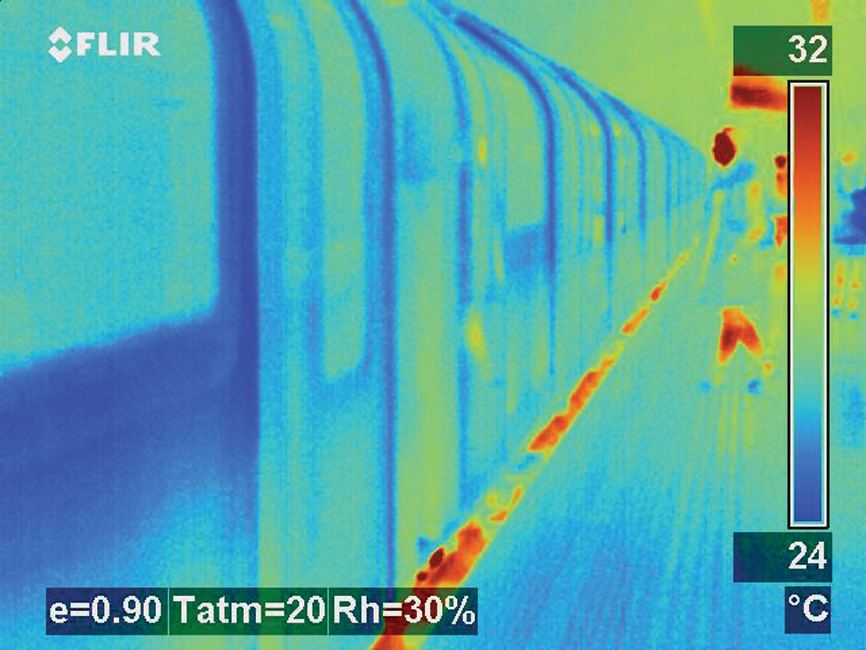 Tube trains pulling into stations account for 50% of the heat generated on the London Underground, producing about 350kW each time

The problem is only likely to get worse as London Underground upgrades the service. ‘The more trains per hour we run, the more heat is generated – and the faster we run the trains, the more heat we generate,’ explains Duffy.

London Underground uses regenerative braking to transfer about half of the energy back into electricity; however, this can only work where trains are braking and accelerating at the same time, on the same electricity substation loop. ‘Regenerative braking has been enabled to minimise the heat generated in the tunnels, but the residual primary heat source remains the braking of trains,’ says Duffy.

‘With increasing service levels on all lines in recent years – and the ambition of TfL for this to continue – the amount of heat in the tunnels is expected to rise.’

Of the heat emitted by the trains, 79% is absorbed by the tunnel walls; 11% is pushed out of the tunnels through draught relief shafts by the train piston effect in the cylindrical tunnel; and the remaining 10% is removed by mechanical ventilation through dedicated ventilation shafts. ‘We face a quandary between delivering the right passenger service and mitigating the increase in heat we generate,’ Duffy says. 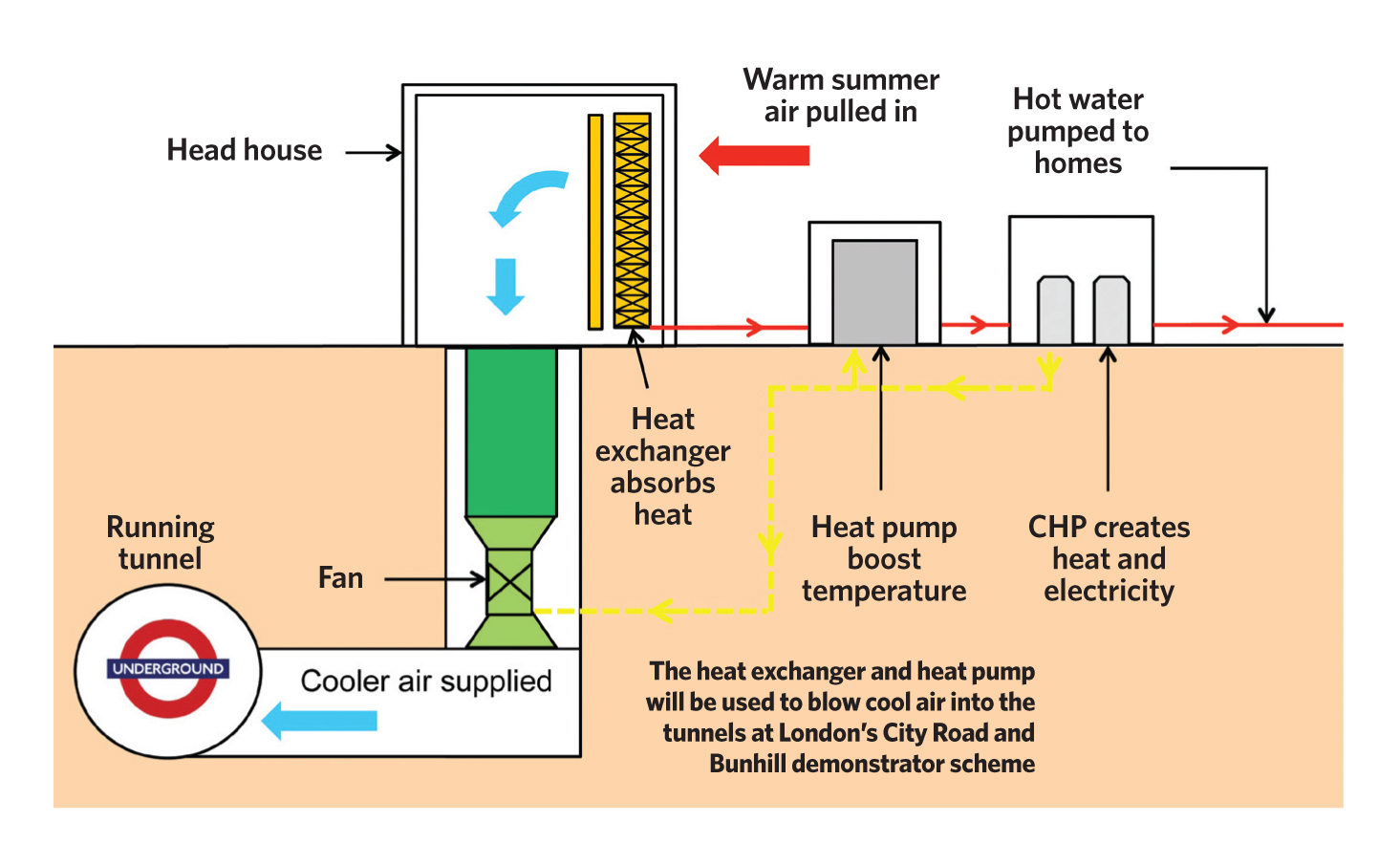 TfL is taking steps to investigate how heat can be extracted from its tunnels and stations using a range of technologies. One solution is enhanced tunnel ventilation. In addition to draught relief shafts, deep Tube lines – such as the Victoria and Jubilee – have tunnel-ventilation systems. Generally, these comprise a large fan installed in a vertical, circular shaft connecting the tunnel to the surface. They were primarily installed as smoke vents, but on the Jubilee Line, in warm weather, the mid-tunnel vent fans are run at half speed to draw cool air into the tunnels through stations.

During the recent upgrade of the Victoria Line, the throughput of fresh air in stations has been doubled by upgrading the tunnel ventilation fans. ‘Where we’ve got the facility for ventilation, we use it,’ says Duffy. 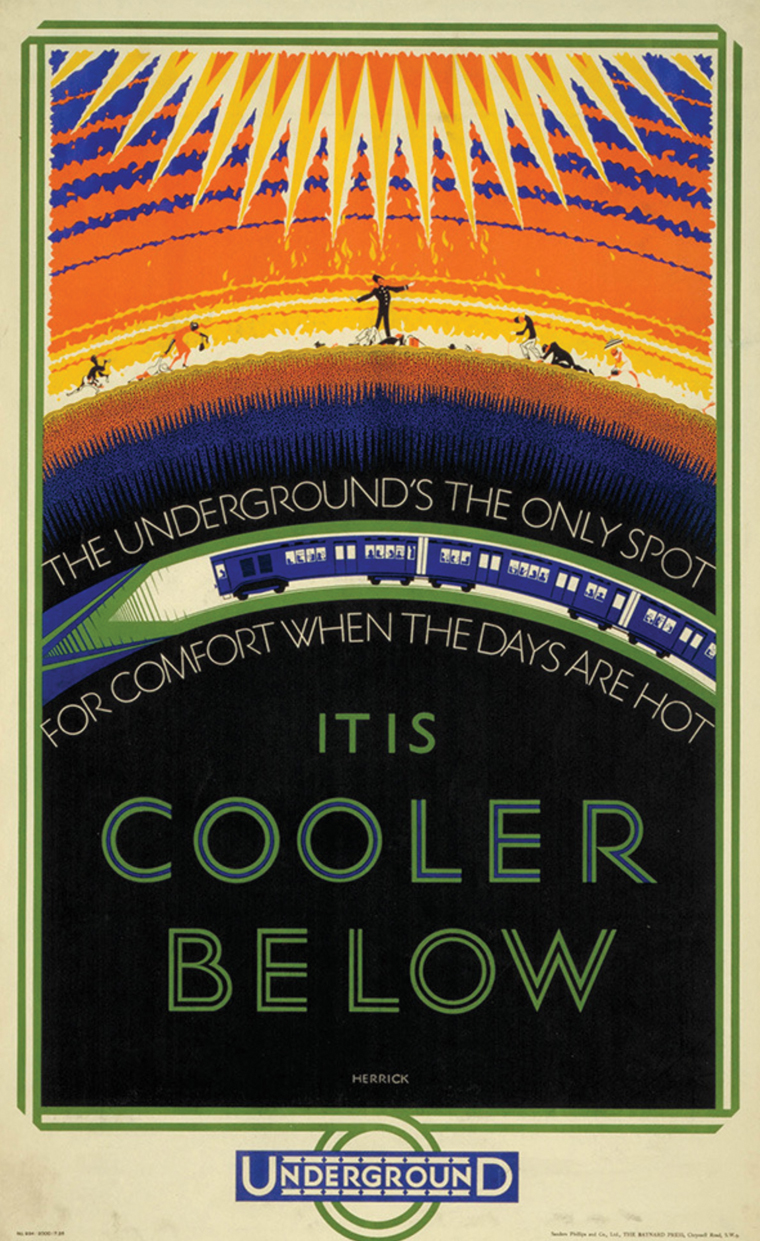 A 1926 poster, encouraging people to use the Underground to stay cool

On older lines, with very few ventilation shafts, it is virtually impossible to thread more shafts down through the capital’s congested streets. ‘Because parts of the system are 155 years old, some of our network is not served by ventilation, which is why we need to look at station cooling systems,’ explains Duffy.

At Oxford Circus, TfL has installed a simple chiller solution, using a roof-mounted air-cooled chiller to remove heat from an above-platform cooling coil. ‘We’re having to put in cooling systems at stations to enable line upgrades,’ says Duffy.

At the City Road and Bunhill demonstrator scheme, in north London, TfL is working in partnership with the Greater London Authority and Islington Borough Council on an EU Celsius Smart Cities-funded project. Currently under construction, it involves the installation of a heat exchanger to a Northern Line, mid-tunnel ventilation shaft. The shaft discharges 70m3/s of hot tunnel air straight into the atmosphere at approximately 25°C. In winter, the heat exchanger will recover heat from the discharged air, and this will then be piped through a primary water loop to a 1MW heat pump, where its temperature is increased.

A secondary water loop will then transfer this heat to Islington council’s existing Bunhill Heat and Power Network, which supplies 700 homes on an adjacent social housing development with low carbon heat and hot water. The heat recovered from the tunnel vent extension will supply an additional 450 homes with heat and hot water, saving up to 500 tonnes of carbon a year. In summer, the heat exchanger and heat pump will also be used to blow cool air into the tunnels.

‘The fan is bi-directional, so in the hotter summer months – when the air temperature outside exceeds the temperature in the tunnel – we can cool the warm summer air using the heat exchanger and heat pump while generating hot water for the homes,’ says Duffy. 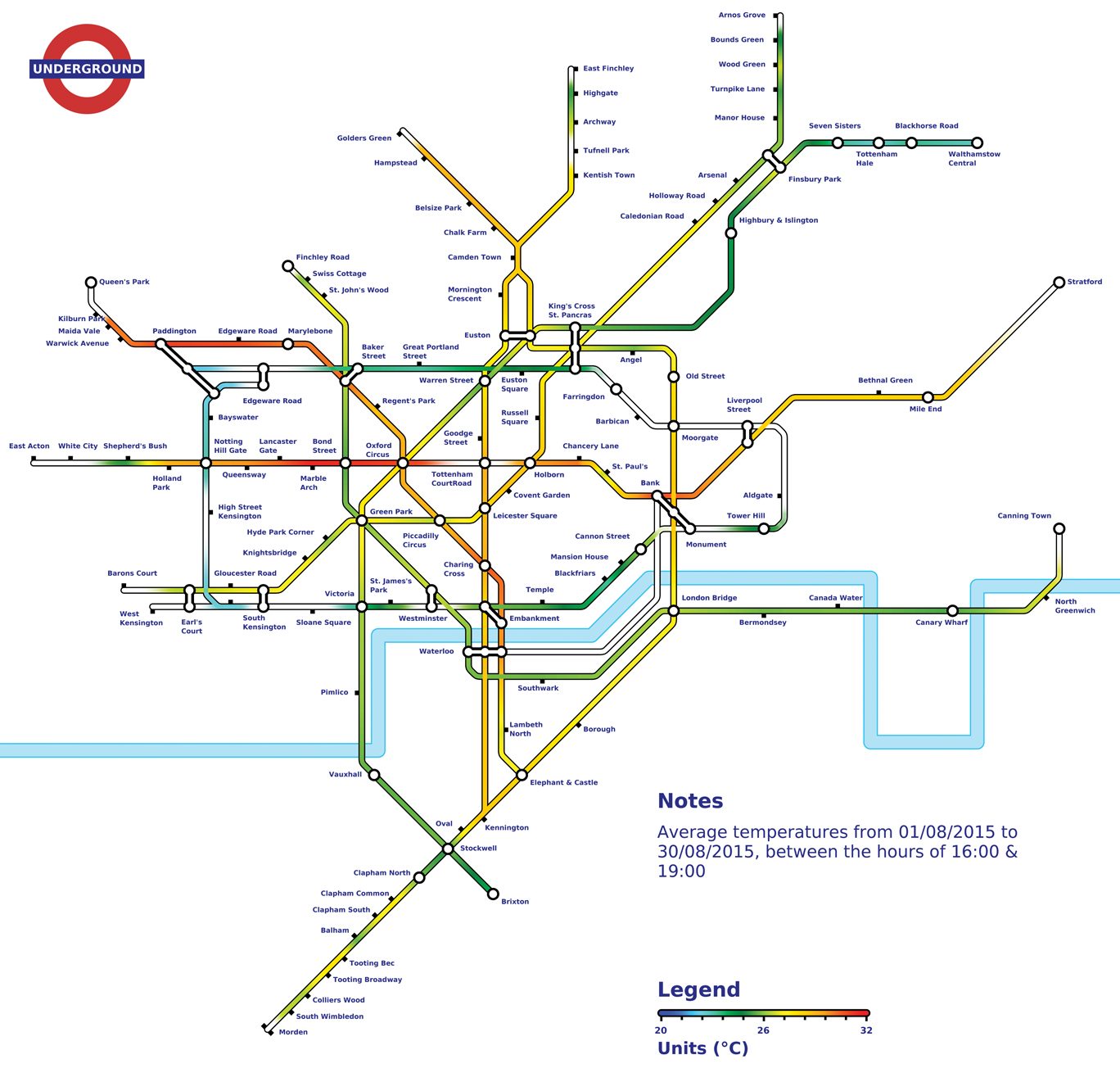 The scheme aims to show that extracting airborne heat from the tunnels is feasible and worthwhile, and that it could help tackle fuel poverty, as well as reduce the cost of cooling for TfL and heating for the borough of Islington.

At Holborn, TfL is investigating the possibility of using a trigeneration system to supply cooling to the station, power to its traction substation, and heat, generated by the engine, to local commercial and residential developments. TfL is also involved with London South Bank University and University College London in the Luster project, to map where subterranean heat energy is potentially available in the capital. In addition to London Underground, the project is investigating heat resource from sewers and cable tunnels. ‘The map will enable people who are heat users to identify opportunities where the heat is available,’ says Duffy.

By far the largest proportion of heat, 50%, comes from the trains slowing down – the process of converting kinetic energy into heat simply by applying the brakes

These examples show that it is technically feasible to use London Underground’s secondary heat sources – and, as far as TfL is concerned, these initiatives are just the start. ‘We’re interested to hear about all sorts of potentially disruptive technologies that could use TfL’s secondary heat sources,’ says Duffy. ‘Tunnel temperatures don’t drop in the winter so – year round – there is an opportunity to take heat from the ground.’

Wherever you are developing in central London, you are close to the Underground. Research by TfL has shown that heat-extraction rates are higher up to 24m from a Tube tunnel – which may result in developers viewing a scheme’s proximity to a line as a potential opportunity for free heat rather than an inconvenience, restricting what they can place in the ground, and where. ‘The key is for London Underground to be involved early in a development, so we can discuss the possibility of using heat,’ says Duffy.

TfL regards this as an opportunity and, potentially, a revenue source, and is keen to work in partnership with engineers and developers. ‘There are many technical, legal and commercial challenges to be faced with this pioneering new strategy and TfL recognises these,’ says Duffy.

‘But if the right partnerships can be developed, the prize of carbon savings, economic benefit and increased efficiency of systems is there to be won.’

Why Crossrail will be cool

Crossrail is a new east-west railway line under construction beneath London. All of its subterranean stations have giant ventilation shafts at either end of the platforms, the primary purpose of which is smoke control. These shafts incorporate reversible fans that can move up to 300m3/s of air; however, they have been designed to operate at half speed to provide ventilation, and to cool the platforms by supplying air at one end and removing it from the other. 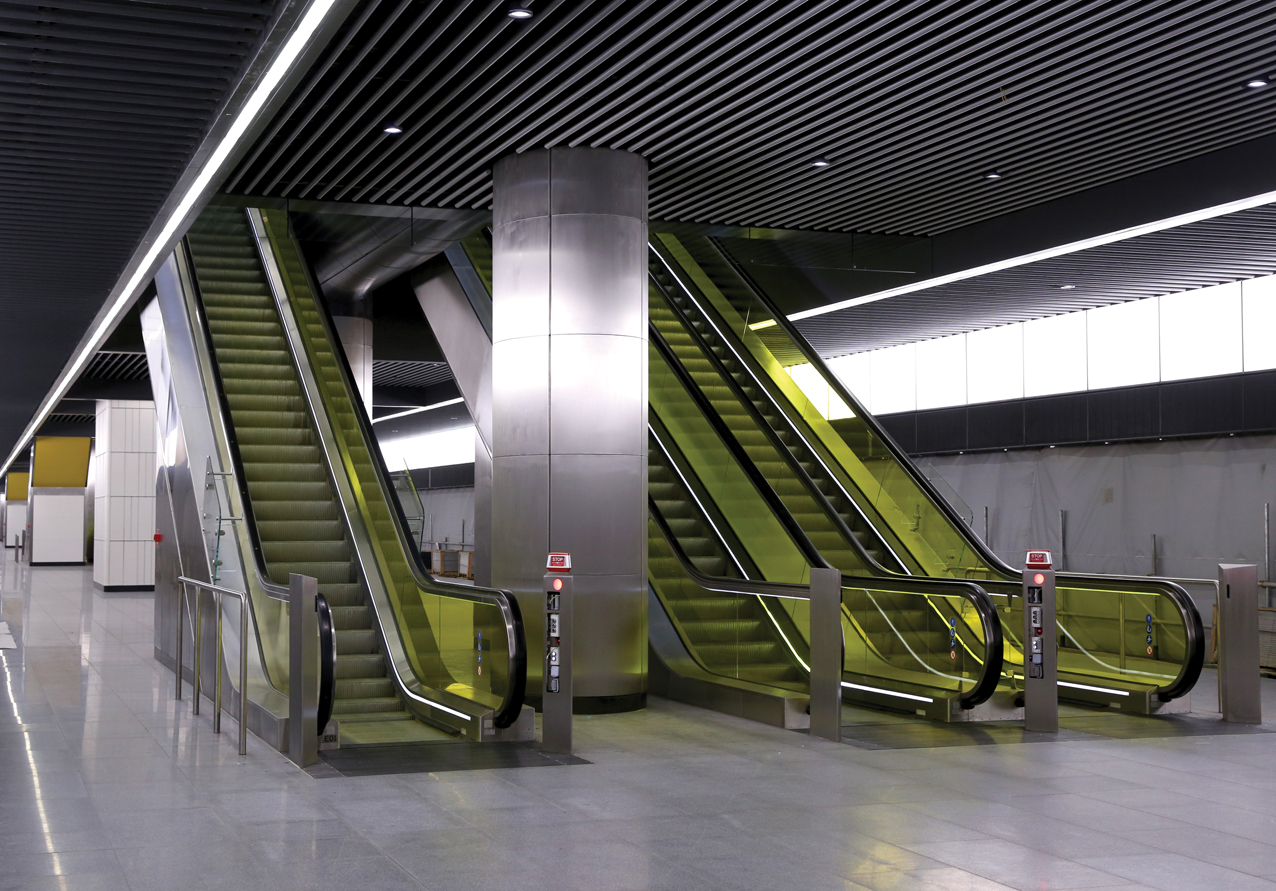 There are also numerous mid-tunnel ventilation shafts for smoke control, which can be used to enhance tunnel and station cooling when required.


To limit the amount of brake-energy emitted as heat, trains approach stations up a gentle incline, to help slow them down. When the train pulls into the platform, under-platform extract removes heat from the brakes and drive motors. Air conditioned carriages ensure passengers remain comfortable during their journey. In addition, some Crossrail stations are surrounded by geothermal piles.