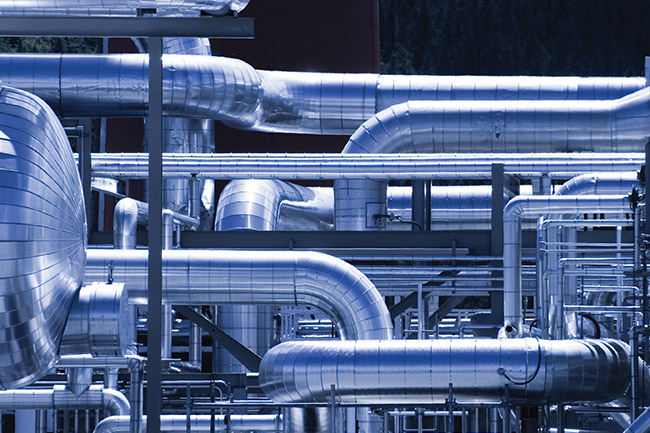 In 25 June 2019, the world’s first hydrogen-powered domestic boiler fired up in Rozenburg, the Netherlands. Developed by BDR Thermea Group, the high-efficiency condensing boiler
uses pure hydrogen as a fuel to provide heat to a residential building – the first such real-life application.

The trial is significant because, now that hydrogen is being promoted as a potential low-carbon replacement for natural gas, it may soon become commonplace in the UK to help meet emissions commitments.

The Climate Change Act requires the UK government to reduce greenhouse gas (GHG) emissions to net zero by 2050. Heat currently accounts for around 50% of UK energy consumption and produces about one-third of its GHG emissions. If the government is to meet its obligations, it will need almost full decarbonisation of heat in buildings. Producing hydrogen in low carbon ways and using it for heat in buildings has the potential to be an important part of the next stage of the UK’s energy transition.

Hydrogen is already used, in both its gas and liquid forms, in the manufacture of chemicals, foods and electronics. According to the International Energy Agency (IEA), however, current methods of production are responsible for annual CO2 emissions ‘equivalent to those of Indonesia and the United Kingdom combined’. This is because the most economical process for producing large quantities of hydrogen is by reforming natural gas through the application of heat. The reforming process produces large volumes of CO2, so hydrogen’s future as a fuel for large-scale deployment to homes and industry is dependent on the simultaneous deployment of carbon capture usage and storage (CCuS) infrastructure.

A number of organisations have started the process of developing prototype domestic hydrogen appliances for use in demonstrations in 2020. These companies are all part of the Hy4Heat programme’s innovation competition to demonstrate the safe use of hydrogen as a fuel for heating, hot water and cooking. As well as developing appliances that can be used with hydrogen gas, the workstream (work package 4) will be providing important evidence regarding safety, in-use emissions, and functionality.

A draft report – Understanding Industrial Appliances from Element Energy – by Jacobs Consulting and Cardiff University has been presented to stakeholders at a workshop event at BEIS Conference Centre. This is a market research study into the variety of industrial appliances and the issues to be addressed.

An alternative to reforming gas with CCuS is to produce hydrogen through electrolysis by using power generated from low carbon sources, such as renewables. In the report Transitioning to Hydrogen, the Institution of Engineering and Technology (IET) says: ‘In the longer term, it may be possible for larger volumes of hydrogen to be produced from low carbon sources, but it is unlikely to be within a timescale to support a sizeable contribution to the UK meeting its 2050 greenhouse gas targets.’

Assuming hydrogen can be produced in large volumes without emitting large quantities of CO2, its appeal to the UK government is that it is an easy win. It could potentially be rolled out at scale to homes and businesses using a significant part of the existing natural gas pipework and infrastructure. This is not an unrealistic proposition; after all, the entire UK transitioned from town gas to natural gas between 1967 and 1977.

According to the Committee on Climate Change (CCC), in its report Hydrogen in a low carbon economy, hydrogen has particular value as a low carbon replacement for natural gas – and, potentially oil – ‘in applications where full electrification is very difficult, disruptive and/or expensive’.

The CCC sees hydrogen heat being used in combination with electric heat pumps for a low carbon heating solution. ‘Our assessment is… that heat pumps, powered by increasingly low carbon electricity, offer the potential to provide heat efficiently most of the time, with hydrogen boilers contributing mainly as back-up, to meet peak demands on the coldest winter days.’

The committee says if hydrogen is to play a substantial, long-term role, then ‘progress towards deployment of low carbon hydrogen must start now’, with a focus on ‘applications that would not initially require major infrastructure changes (for example, power generation, injection into the gas network and depot-based transport)’. 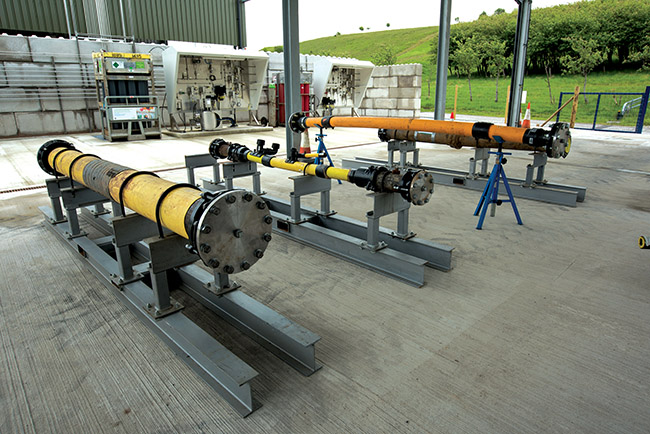 The H21 hydrogen testing facility in Buxton. Results will be fed into a BEIS consultation document on low carbon gas

Chris Manson-Whitton, a director of Progressive Energy, envisages the transition to hydrogen in stages: ‘I think we’ll be blending hydrogen with natural gas first, alongside some large industrial consumers switching to hydrogen. This will be followed by some new-build housing schemes based on 100% hydrogen and then, finally, we will deploy 100% hydrogen to the remaining consumers.’

In the HyDeploy programme, Progressive Energy is working with Cadent, NGN, ITM Power, Keele University and the Health and Safety Laboratory on a series of trials to establish how much hydrogen can be blended safely into the existing gas grid. Blending hydrogen will lower the grid’s carbon intensity without the need to make major changes to the infrastructure or end-user appliances.

Currently, hydrogen is limited to 0.1% of grid gas; but, 2015 research by the Health and Safety Executive suggested it might be safe for the grid to comprise up to 20% hydrogen.

‘The bar that we have to meet with HyDeploy is that the system is as safe with the proportion of hydrogen used as it is with 100% natural gas. This project will provide that evidence,’ says Manson-Whitton.

Keele University’s private gas network of 100 domestic and 30 commercial users will be used for the first trial. The electrolyser to manufacture hydrogen on site using renewable power has been installed; currently, the blender to keep the proportion of hydrogen constant as gas demand fluctuates is being installed. ‘Over the coming weeks, we will gradually start to increase the proportion of hydrogen up to a maximum of 20%,’ says Manson-Whitton. ‘It will be a complete success if nobody notices any difference.’

After the Keele trial, two public trials are scheduled to take place. ‘Blending allows us to reduce the carbon intensity of domestic consumers without any impact on them; if we rolled this initiative out across the UK, it would have more impact than the entire Renewable Heat Incentive has had in all of its history,’ says Manson-Whitton. ‘UK-wide, it has the potential to deliver around 30 terawatt hours of low carbon heat.’

The UK’s annual domestic gas demand is about 300 terawatt hours. Clearly, blending hydrogen with natural gas will make a significant contribution to reducing carbon emissions, but more needs to happen if the UK is to meet its net-zero target.

The HyNet project’s aim is to create the UK’s first CCuS infrastructure, to allow hydrogen to be produced from natural gas to facilitate the creation of a hydrogen-powered industrial cluster in the North West by 2025 (see 3D map of North West England below). 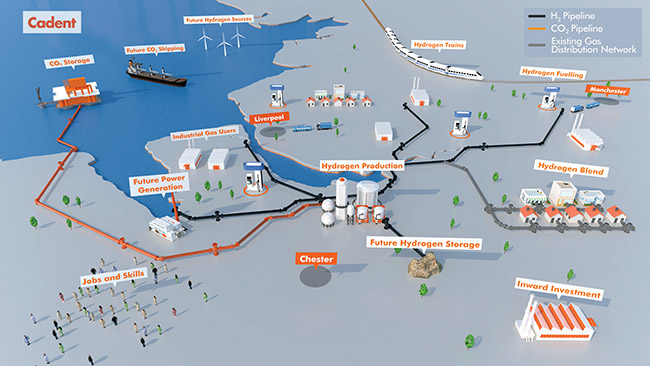 More generally in the industrial sector, the IET – in Transitioning to Hydrogen – states that some steam and hot-water boilers ‘can be converted to 100% hydrogen using existing technology’. Similarly, it says that, in the power sector and the combined heat and power sector, work is already under way to develop gas turbine combustion systems suitable for pure hydrogen.

But, the report warns that some existing CHP systems using reciprocating engines can only take a maximum of about 20% hydrogen by volume before they will have to be replaced. In addition, for some industrial applications – such as glassmaking kilns – the IET says it is less clear to what extent hydrogen can be substituted for natural gas ‘because of the different combustion characteristics’.

Work by Element Energy for BEIS, however, indicates that – with appropriate development and demonstration – there are no fundamental barriers to industrial use of hydrogen, which has informed BEIS’s Fuel Switching programme.

In contrast to HyNet’s industrial focus, the Hy4Heat project has been established primarily to deal with the use of hydrogen in domestic properties. This, and the H21 project, with its focus on the gas supply network (see box, H21 converting the gas grid to hydrogen), are looking at the feasibility of converting the gas grid and domestic properties to run on 100% hydrogen.

The advantage of switching from natural gas to hydrogen in the domestic sector is that, once a boiler has been replaced, much of the heating system, including the radiators and distribution pipework, can be reused.

According to IET, a major problem with domestic properties is that conversion of existing natural gas appliances to operate on 100% hydrogen ‘is not viable’. This could mean up to 24 million boilers having to be replaced. The IET also says that there is ‘some uncertainty’ as to whether open-flame gas hobs and fires could be used, adapted or replaced.

Until hydrogen replaces natural gas, however, gas boilers will have to be designed to be hydrogen ready, so they can operate initially with natural gas, but be capable of conversion to hydrogen in the future. This will help reduce the workload at the point of hydrogen conversion in the domestic sector.

‘We’re working to demonstrate the capability of hydrogen boilers, but when we go to full commercialisation and volume production in, say, five years’ time, we’re aiming to have a gas boiler that is hydrogen ready,’ says House. ‘All an engineer would have to do is swap a few key components and then recommission the boiler, and it would soon be up and running.’

However, the conversion of homes to hydrogen heating may not be as simple as swapping the boiler. There are concerns that the existing gas pipework within a home will need to be tested and may have to be adapted or even replaced for use with a hydrogen boiler. In its October 2018 report Logistics of Domestic Hydrogen Conversion for BEIS, Frazer-Nash Consultancy says that in the case of homes in the UK, a home survey would be needed to assess the condition of the gas pipework, using a gas-tightness test and an inventory of gas appliances.

In 2016, Northern Gas Networks, the gas distributor for the North of England, working with Cadent, SGN and Wales & West Utilities, produced the H21 Leeds City Gate feasibility study. This concluded that it was both technically and economically possible to decarbonise the UK’s gas distribution networks by converting them to 100% hydrogen, based on a blueprint of the city of Leeds. After securing an additional £10m of funding, the organisations are now working to provide safety-based evidence for the conversion. Its report is expected in 2020.

The test is important because hydrogen has a smaller molecular size than natural gas, making it ‘much more prone to leakage through joints and component assemblies than natural gas’. However, the report does also point out that hydrogen tends to disperse and dilute more readily than natural gas, so leaks may be less of an issue.

The consultancy says that the pre-conversion tasks required for domestic gas pipework are not so certain because various different materials are used for domestic natural gas pipework including copper, steel and MDPE, in addition to various jointing methods. It highlights concerns about the ability of soldered copper pipes to carry hydrogen and calls for tests to confirm its suitability. It also raises the issue of inaccessibility of some domestic pipework for inspection – for example, where the pipe is ducted beneath a concrete slab – which may lead to some pipes having to be replaced.

The IEA in The Future of Hydrogen report offers seven recommendations to help governments, companies and others to seize this chance to enable clean hydrogen to fulfil its long-term potential:

How thermal storage will free up roofspace at Millennium Bridge House