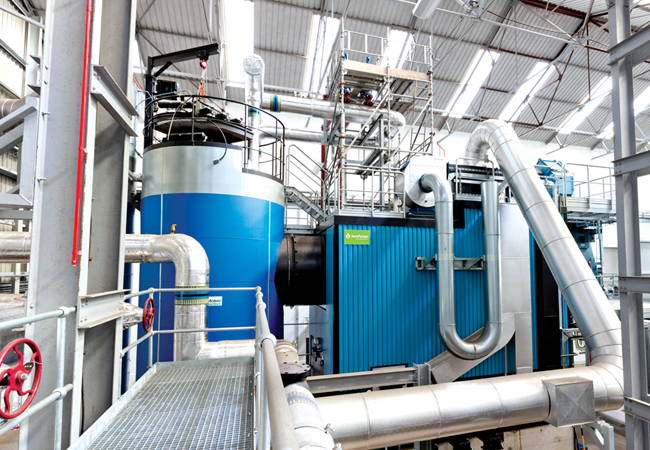 The 6.5MW biomass system is capable of reaching temperatures in excess of 1,000oC

With more than 9,200 students, 2,500 staff and a range of specialist equipment, the University of St Andrews, in Scotland, has similar energy needs to a small town. In 2013, it announced its intention to become the first university in the UK to be carbon neutral for energy, and started its journey with a £25m investment in a biomass energy scheme at the former Curtis Fine Paper manufacturing plant in Guardbridge.

The Eden Campus Energy Centre scheme involved a 6.5MW biomass furnace, capable of reaching temperatures of >1,000°C and consuming more than 300m3 of woodchip per day in the depths of winter. The hot water generated is pumped through a buried, 27km district heating network, to the university’s North Haugh campus, where it serves 42 buildings, including 2,600 students’ residences.

Vital Energi was appointed to deliver the project and fulfill a five-year operation and maintenance agreement, which includes a 50-year warranty on the district heating pipework. Since the scheme became operational 18 months ago, we have been analysing the collected data to identify any opportunities to improve its operation. 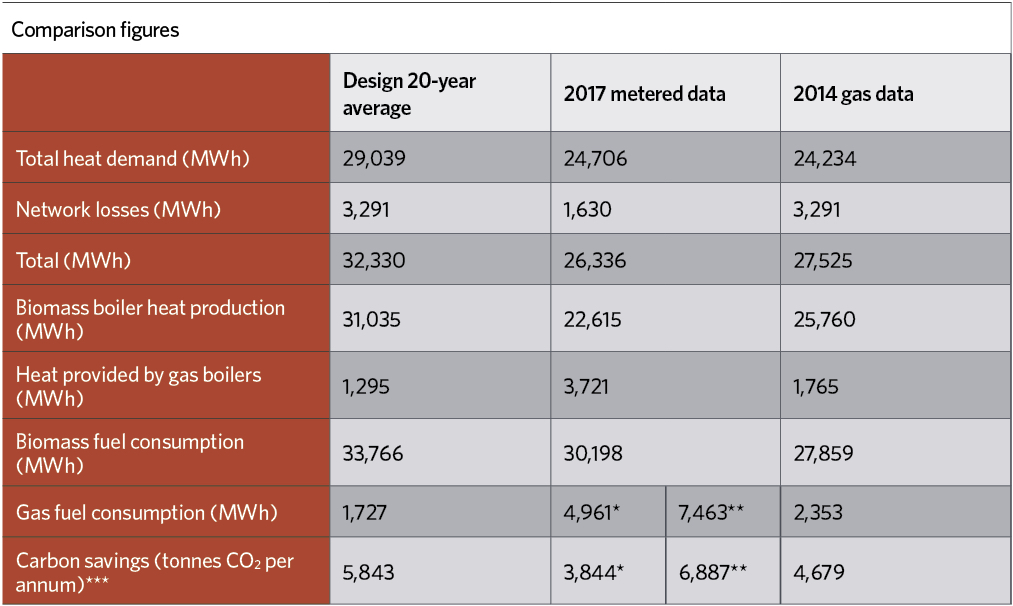 A review of the design data reveals a fairly simple explanation for the majority of these variances. The calculation of the carbon savings is based on the efficiency of the existing boilers, which were retained as backup in individual buildings. The design assumption was that the boilers within the buildings had a seasonal efficiency of 60-85%, with an average of 75% across the campus. Assumptions had to be made because the existing boilers did not have specific gas or heat meters. The actual data shows an average efficiency of just 49.9%.

Figure 2: Estimated 2014 annual load profile with orange areas showing where the gas boilers are expected to be used to meet total demand

These boilers range from 40 years old to modern condensing boilers, but even on modern units efficiency was low. The biomass plant was also not operating during a six-week summer period due to storm damage. With low summer demand, the gas boilers were operating at part load, with elevated return temperatures and constant short cycling to meet intermittent demand.

So the actual metered data figure is not a true seasonal figure and is likely to be a snapshot of the boilers being used during summer – the worst possible time in terms of efficiency. 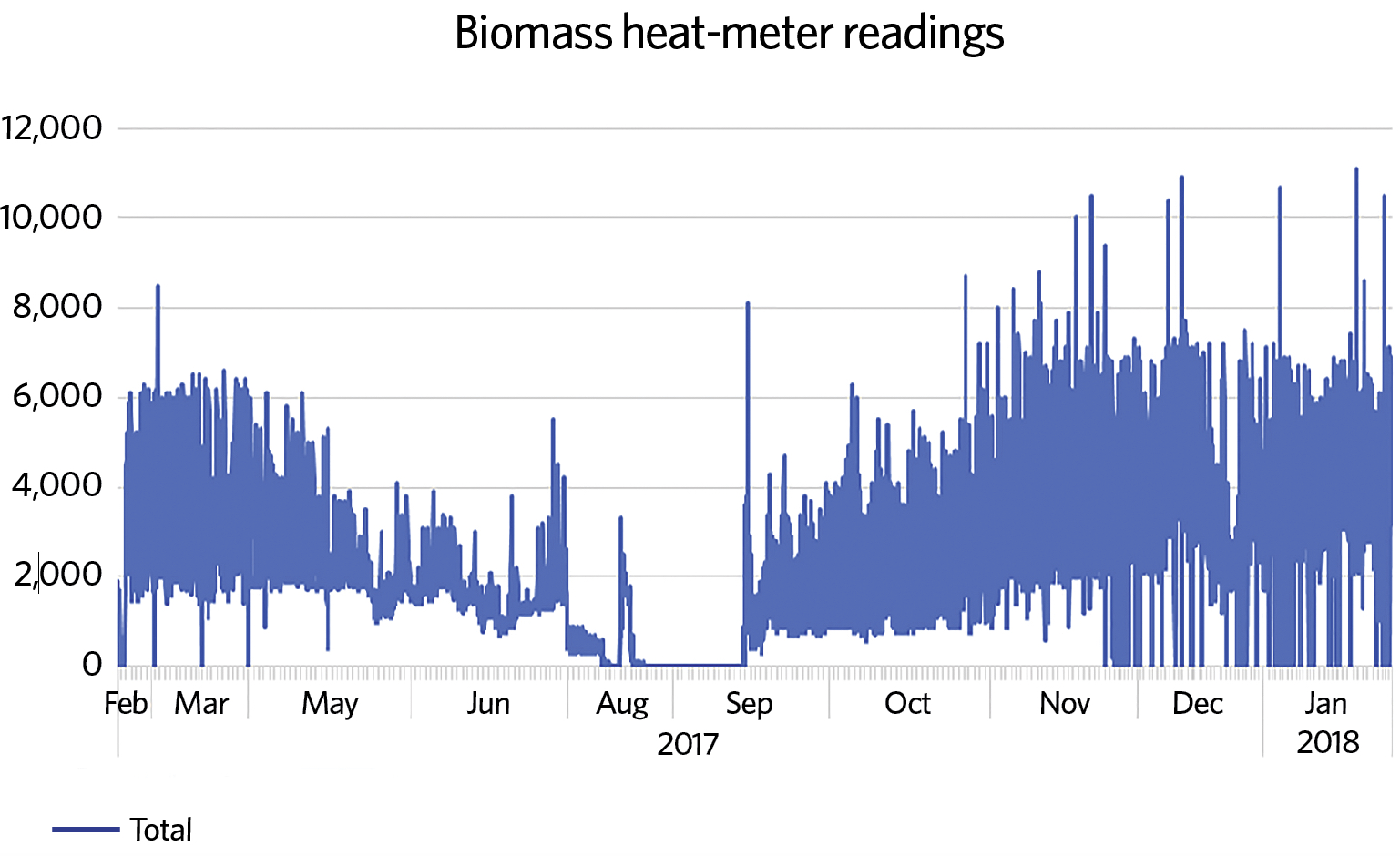 Figure 3: Metered load profile from 2017 showing where biomass boiler did not work for six weeks due to storm damage

One of the key performance indicators (KPIs) for the project was that the biomass system would contribute a percentage of heat to the scheme. To calculate this, Vital retrofitted meters on the university’s gas boilers. As well as illustrating the amount of gas used, we will be able to investigate the boilers’ short-term and seasonal efficiency.

For comparison purposes – assuming the design estimate of 75% gas boiler seasonal efficiency, instead of the actual boiler figures within the carbon calculation – we see significantly reduced gas consumption. This gives annual carbon savings for the actual data of 3,844 tonnes of CO2. While this appears very low, it may be closer to the mark given the annual heat demand recorded. 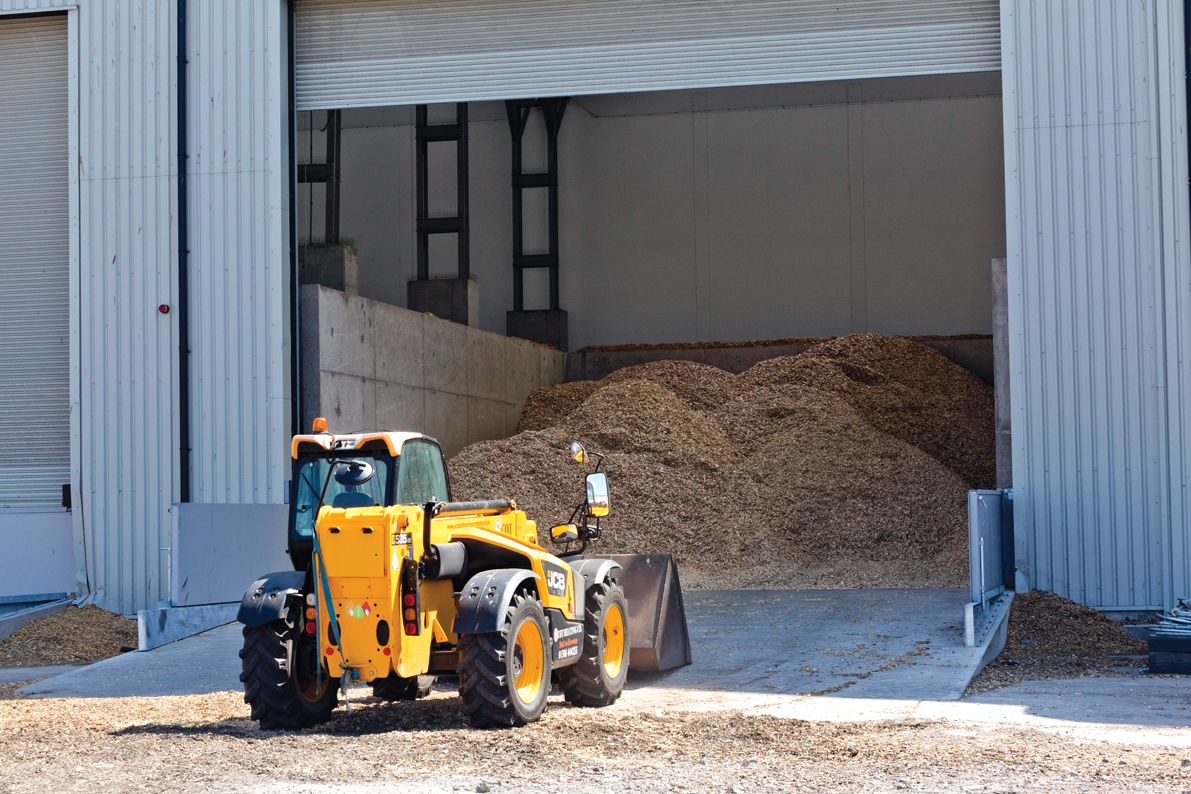 As part of the project, the university created its own wood-chipping facility at the Eden Campus 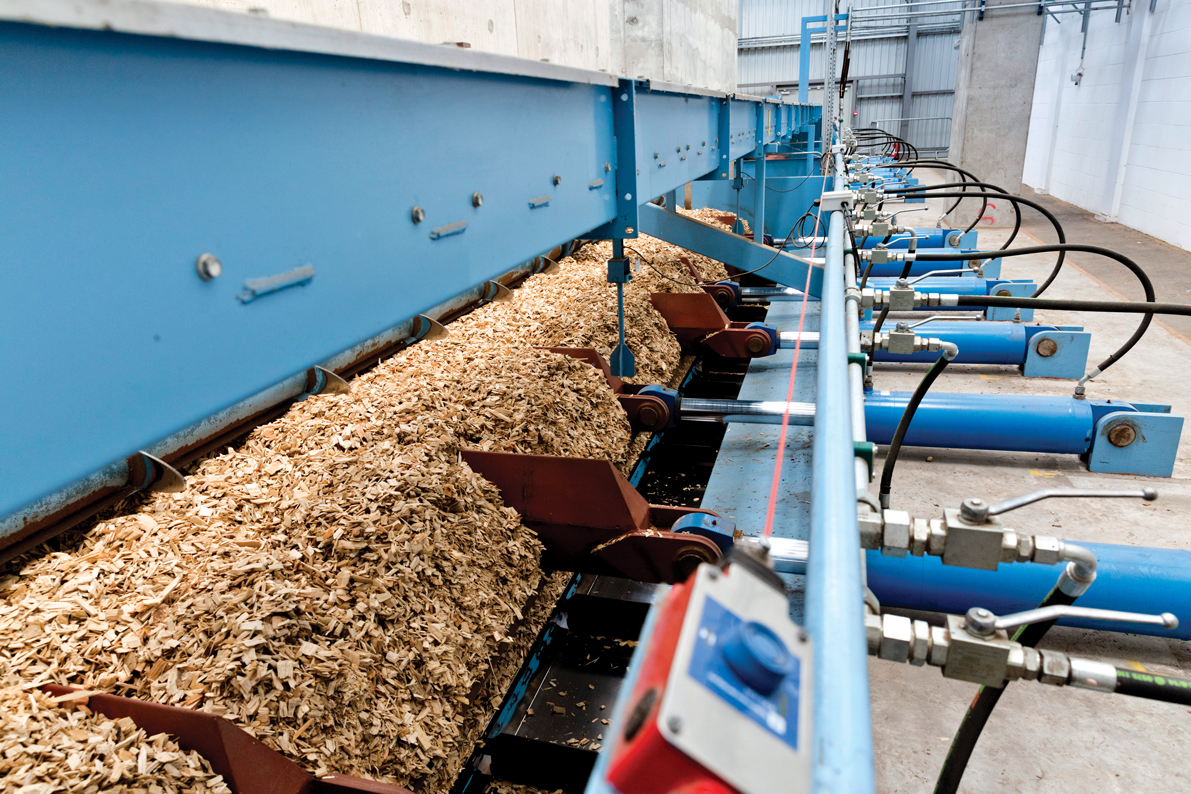 Comparing the design figures for annual heat demand against the recorded figures shows a 5,000MWh (16.5%) difference. Looking back at the design feasibility report, it shows the design figures were estimated on best available gas data for 2014 (Figure 1, third column), and normalised using 20-year average degree day data, to give a ‘typical design year’.

To ascertain whether 2014 was a particularly warm year we carried out a range of sensitivitiy analysis including varying boiler efficiencies and pipework insulation, and removing buildings from the scheme.

It was important for us to understand what would happen in a warm year where the biomass would struggle to operate due to minimum turn down in the summer.

The analysis revealed that 2014 had an above average annual temperature, which resulted in carbon savings lower than the normalised design year (see Figures 2 and 3).

With external temperatures accounted for, the design estimation suggests we should be saving a further 800 tonnes of CO2 in this year, so further investigation into the figures was required to understand the differences. The 2017 data shows the gas boilers were used much more than predicted at the design stage.

There are three main reasons for this. First, the connection of the physics building – which had the largest heat demand – was delayed. This building accounts for almost 10% of the annual heat demand, but was running with its own boilers, accounting for 458 tonnes of CO2. Second, there was an unforeseen six-week shutdown due to storm damage, which accounted for approximately 113 tonnes of lost CO2 savings. Finally, the average measured moisture content of the woodchip delivered on site was 48%, as opposed to the design estimate of 40%. This caused a reduction in boiler efficiency, which accounts for 38 tonnes of CO2. 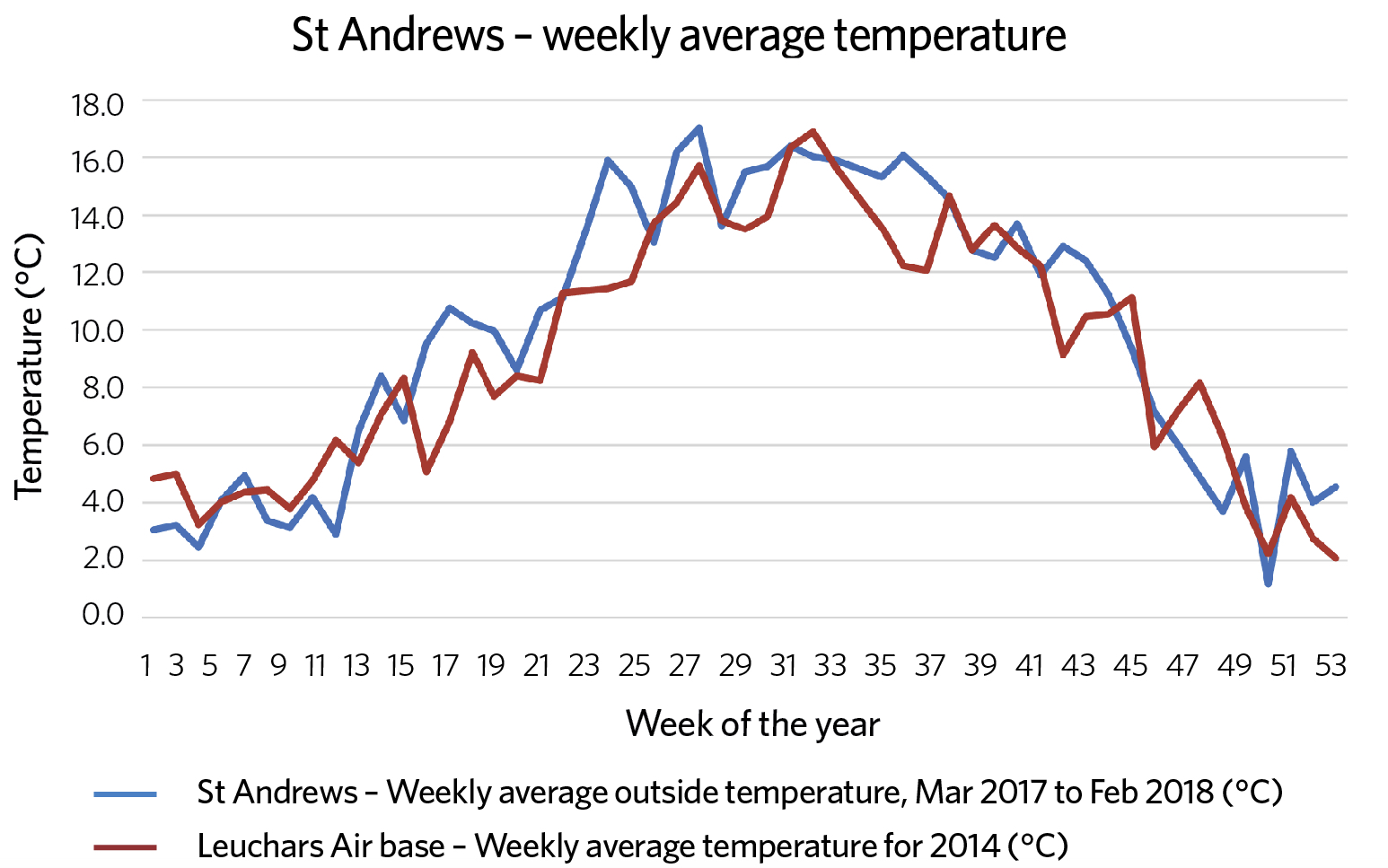 Figure 4: Annual temperatures from 2014 against the external temperature logs from the energy centre for 2017

Taking these anomalies into account, savings of 4,453 tonnes of CO2 could have been realised for the scheme, which is fairly close to the design assumptions, with further anomalies likely to be the result of variations in network losses, external temperatures and actual seasonal boiler efficiency assumptions used in the carbon calculation.

Mark Simpson, director of estates at the University of St Andrews, said: ‘This was an extremely challenging project and presented several substantial technical challenges including a few “firsts” for the UK.

‘We’re pleased the relationship with Vital Energi is ongoing, and they continue to work with us to analyse the data and identify areas of improvement. This is essential, as we were always committed to creating a cycle of continuous improvement, which will ensure we get the maximum financial and environmental benefits from the scheme.’

Looking to the future 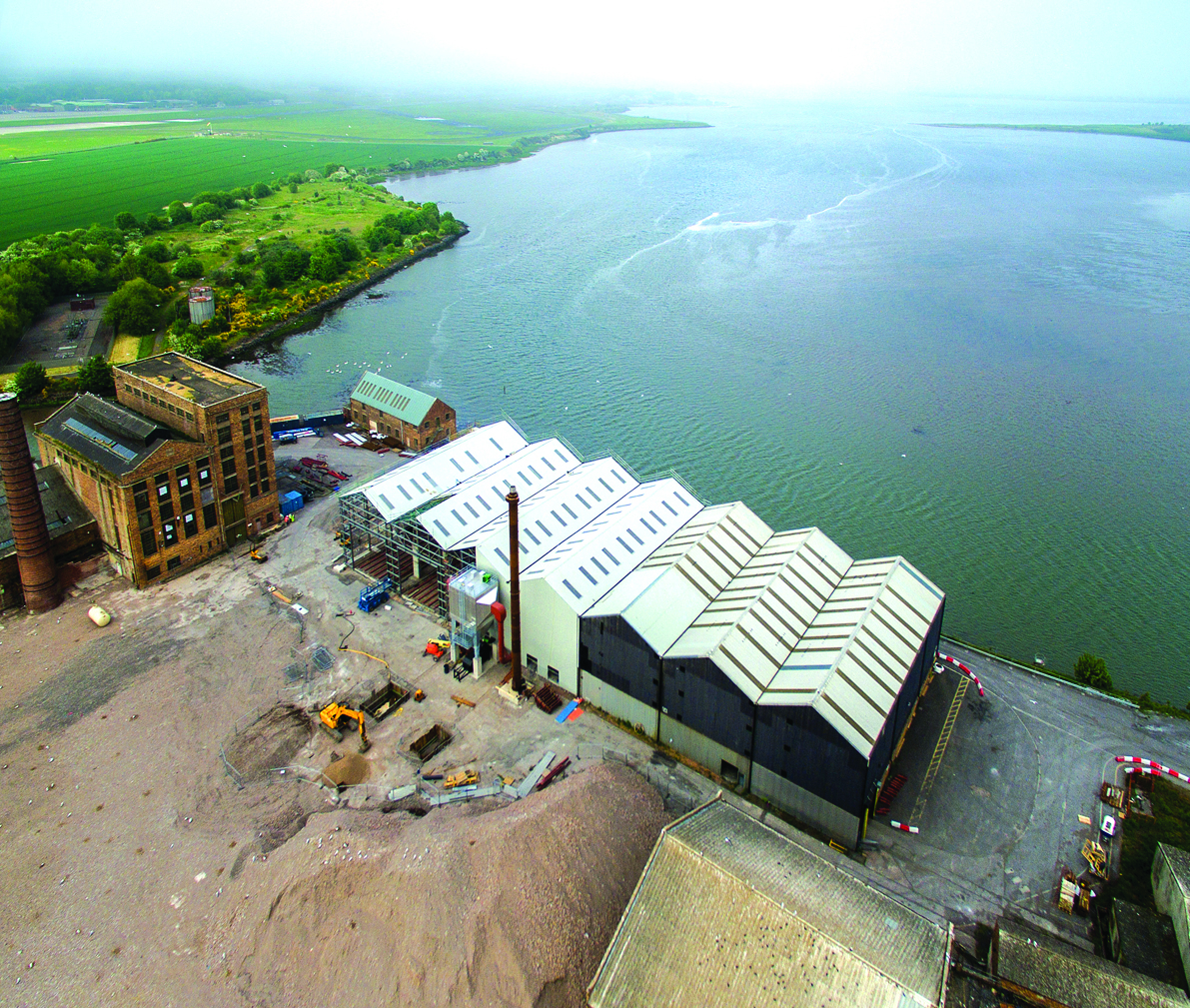 The former Curtis Fine Paper mill in Guardbridge was completely renovated by Vital Energi for the project. The site has now been renamed ‘The Eden Campus’

Our analysis of the raw data showed how important it is to review data with comparable design estimates. Now design estimates have been rationalised to ensure accurate comparisons we can now use data to inform future design assumptions and optimise systems.

The data has shown that we need to work with our woodchip supplier to lower chip moisture content, for increased boiler efficiency. We must also investigate existing gas-boiler efficiencies, to ensure buildings remain connected and biomass downtime is minimised.

Future analysis of the data will help us to understand if we normalised the original data correctly, and show whether the predicted carbon savings are consistent over the longer term.