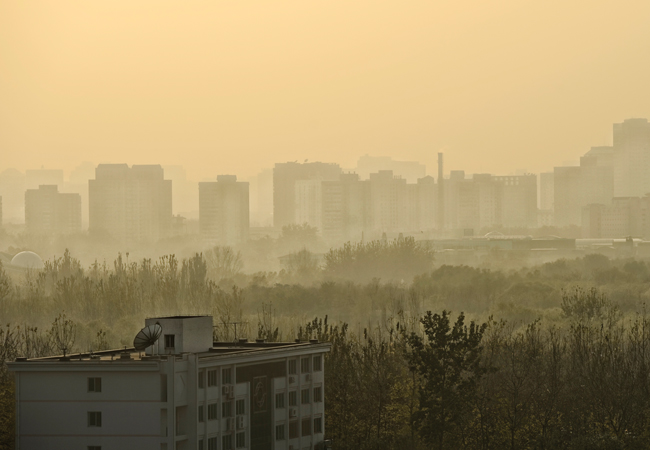 China’s rapid industrial growth has led to unprecedented levels of air pollution, which is having an impact on the health of its one billion inhabitants. Known contributors to this are traffic, coal-burning industries, and the combustion of solid fuels to heat homes.

The Beijing Municipality is at the forefront of the fight against air pollution, and is making a huge effort to tackle it, including banning new coal installations, restricting traffic and – of particular interest to engineers – introducing strict nitrogen oxide (NOx) emissions standards for gas boilers. (See panel, ‘War on smog’).

The Beijing Municipality has introduced a range of research measures to tackle air pollution:

Since 1 April, installations have had to comply with tough NOx legal limits for new and existing gas boilers that are even higher than European Union standards. The municipality has also introduced incentives to reduce gas-fired boiler NOx; as a result, 1,500 boilers were modified in 2016 (see panel, ‘Beijing’s tough NOx limits for boilers’).

This article will look at how NOx in boilers can be reduced by injecting water or steam into the flame zone, and describe the first project in China to adopt this method, using a system developed in Europe over the past 15 years. First, however, we will consider a range of ways to reduce NOx – which can be classified as post-combustion methods and combustion-control techniques.

Under the Standard on Air Pollutant Release for Boilers (DB11/139-2015), new installations and coal-to-gas conversions must now comply with a NOx limit of 30mg/Nm3, while existing installations have a limit of 80mg/Nm3 (at a reference O2 concentration of 3.5% for industrial boilers, including heating applications, and 3% for power plant boilers). The equivalent EU Medium Combustion Plant Directive NOx limit for new installations is 100mg/Nm3 at 3% O2 (70mg/Nm3 in particular cases).

As well as strict legal limits, the Beijing Municipal government introduced a gas-fired boiler NOx reduction incentive programme, through which projects are rewarded according to how much NOx they save. This ensures money goes to projects with the highest impact. As a result, 1,500 gas-fired boilers were modified in 2016. This year, Beijing plans to implement low NOx modifications on more than 7GW of gas-boiler capacity.

The issue of NOx emissions in gas combustion is mainly down to so-called thermal NOx, which is the reaction of nitrogen and oxygen molecules present in the combustion air. Thermal NOx formation varies exponentially with flame temperature, so the primary method of NOx control consists of reducing the flame temperature. This can be achieved in several ways:

For the combustion system supplier, the design challenge is to lower the flame temperature, while maintaining flame stability and boiler efficiency. Safety is also critical, especially when dealing with FGR, because of the risk of explosion from potential carbon monoxide (CO) present in recirculated exhaust gases.

Injection of water or steam causes the stoichiometry (the quantitative relationship among substances) – and therefore the adiabatic flame temperature – of the air-fuel mixture to be changed. Adding steam or water also dilutes the calories generated by combustion. Both phenomena cause the combustion temperature to be lowered – the flame colour becomes noticeably orange, as shown on Figure 1. If the flame temperature is sufficiently reduced, thermal NOx will not be formed in great concentrations. 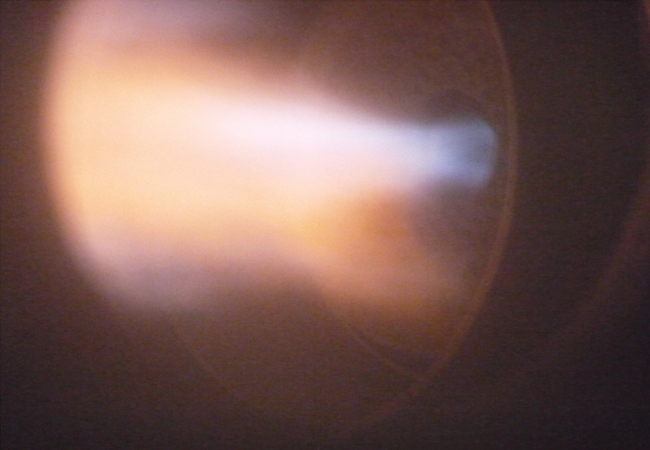 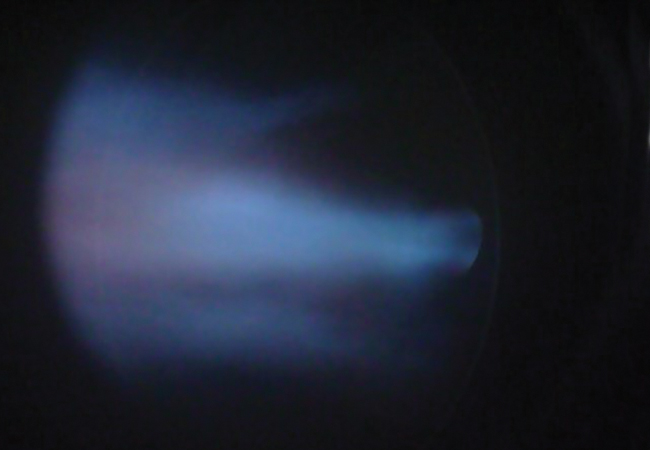 The water vapour pump (WVP) system is a wet combustion process developed and patented in 1979 by Dr Rémi Guillet, of Paris-based company CIEC, which has been part of the Engie Group since 2004. It consists of pre-heating and saturating the ambient combustion air with sensible and latent heat (humidity) recovered from the flue gases. To implement this, two spray towers are placed in the air stream: one in the fresh air intake and the other between the condenser and the chimney stack, as per Figure 2. All components are made of stainless steel and the burner is purpose-made to handle saturated combustion air. It should be noted that the WVP custom burner’s geometry is nothing like that of a typical low-NOx burner.

Because the dew point of the flue gases entering the condenser is increased (from ~58°C in the case of regular gas combustion to ~68°C in the case of wet combustion), a lot more latent heat is recovered in the condenser section of the boiler compared a regular condensing boiler operating at the same low temperature hot water (LTHW) flow and return temperature. Furthermore, the additional heat recovery occurring in the exhaust spray tower cools the flue gases to much lower temperatures compared with a regular boiler. As a result, the WVP system is much more efficient than a regular condensing boiler. 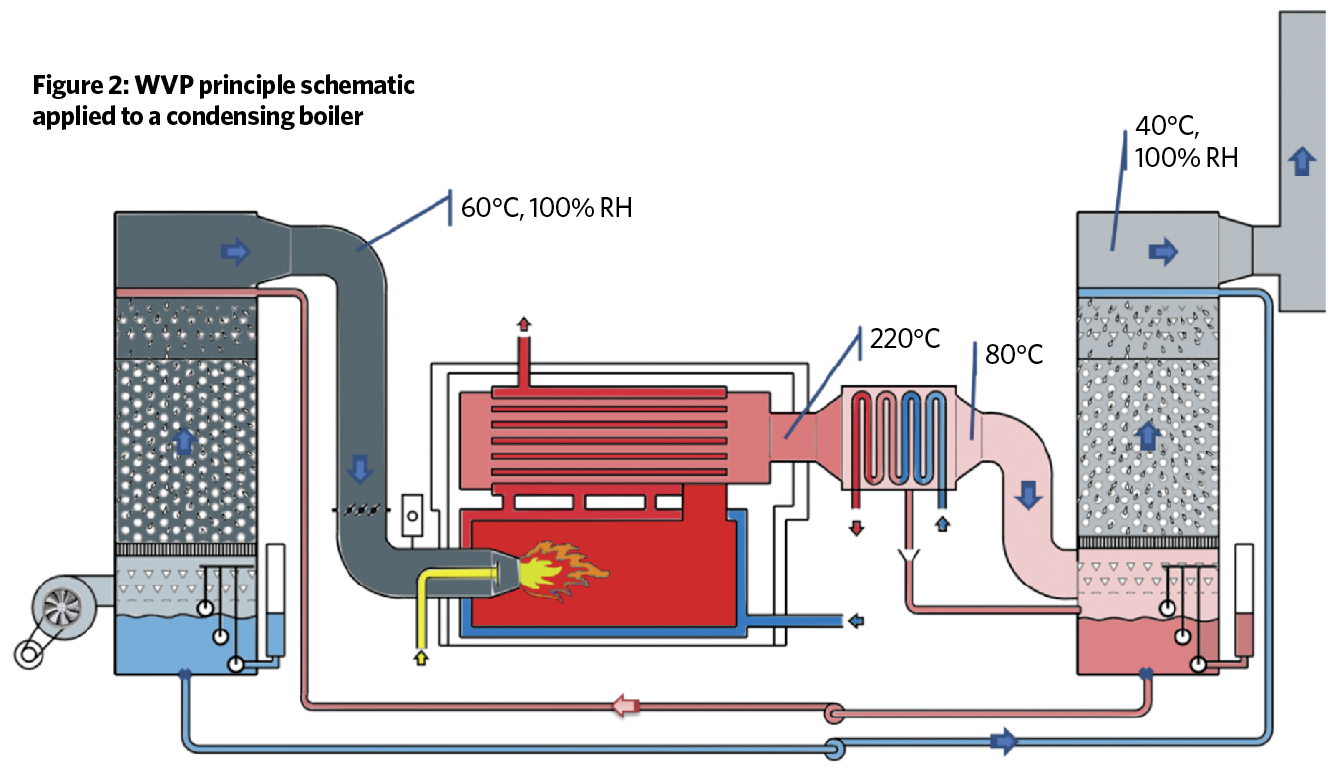 The WVP system is characterised by very low flame temperatures, so is capable of reaching very low NOx; 30mg/Nm3 is easily achieved as long as the combustion air is pre-heated to 60°C and fine-tuned to an optimal temperature. In contrast, ‘dry’ low NOx and ultra-low NOx burners can only achieve comparable levels of NOx emissions by using a high proportion of FGR and, potentially, oversized combustion chambers.

Furthermore, reducing the flame temperature beyond a certain point in a dry combustion system results in CO formation – another controlled pollutant – but this is not a problem for the WVP. The extensive removal of moisture in the exhaust tower also means the WVP will not generate a plume at the outlet of the chimney stack.

Over the past 15 years, CIEC has deployed the WVP system in several European countries – mainly France, but also in Germany and Italy. NOx limits are less strict in Europe, so the system is installed as an energy-saving measure. 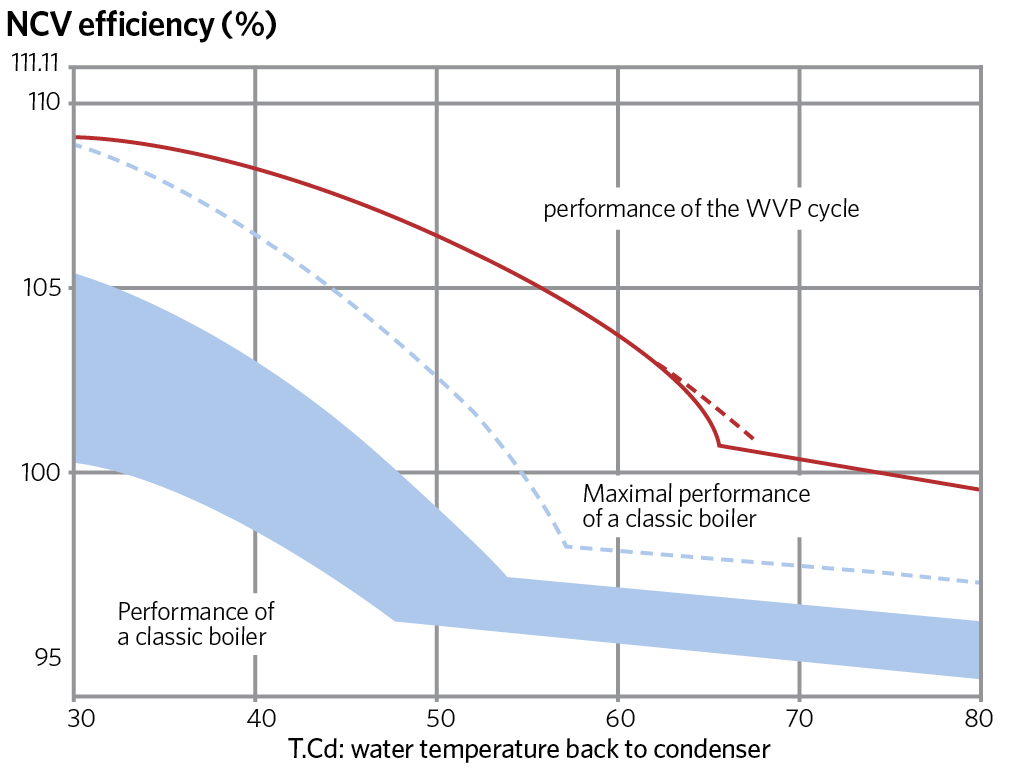 Figure 3: NCV efficiency of the WVP and regular condensing boiler as a function of the LTHW return temperature

In 2016, Beijing United Gas Engineering and Technology (Buget) was awarded a contract by a college in Beijing to renew its boiler house. This consisted of decommissioning the coal-fired boiler house and installing a new gas-fired system within the same building envelope. The scheduled completion date was before 1 April 2017, so Buget could have installed boilers with a NOx rating of 80mg/Nm3. However, the parties decided to explore solutions that were cleaner and achieved a better life-cycle cost; it was decided to implement the WVP system in China for the first time. 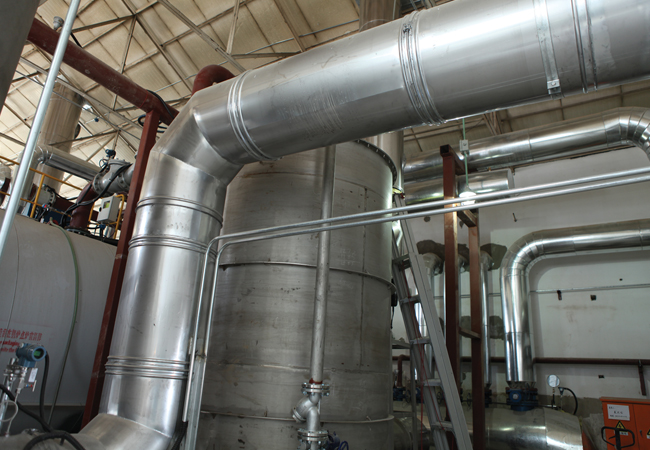 Designed by Buget, the system comprises two 5.6MW gas-fired condensing boilers supplying LTHW to a campus serving 160,000m2 of indoor spaces (the system has been sized to serve 200,000m2, including planned extensions). The LTHW distribution network is designed for a flow and return temperature of 70°C/50°C; however, all terminal units are controlled by manual three-port valves, making the return temperature variable. The duty and standby arrangement of the boilers meant only one was fitted with the WVP combustion system; the second was fitted with a standard low-NOx burner.

Commissioning works concluded in March 2017, with the NOx emissions tested at 23mg/Nm3 (corrected to 3.5% O2 content), well below the 30mg/Nm3 limit. Overall boiler efficiency was 107% – at an LTHW return temperature of 45°C – and CO emissions were measured at 0mg/Nm3.

The WVP is combustion technology capable of achieving ultra-low NOx emissions (<30 mg/Nm3) at considerably higher efficiencies and lower life-cycle cost than conventional condensing boilers. It can be retrofitted to an existing boiler without any significant loss of capacity, whereas typical low-NOx burner retrofits may require a derating of capacity. Faced with a severe smog problem, Beijing is at the forefront of the fight against air pollution and its actions should be observed by policy-makers from around the world. CJ