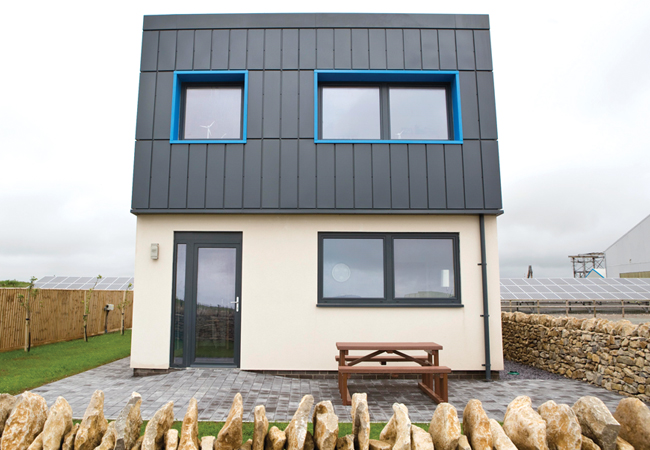 Enough solar energy falls on Earth every day to power the planet for 27 years – yet we are failing to use it to our advantage.

That’s the view of Dave Worsley, research director at the Sustainable Product Engineering Centre for Innovative Functional Industrial Coatings (Specific), at Swansea University. He believes this abundant, renewable energy source has the potential to fuel smart homes of the future.

With effective storage methods, our aim is for solar air collectors to deliver 100% of a building’s space heating requirements all year round

Worsley says the best way to ease the increasing strain on our electrical grid and achieve ‘nearly zero’ energy buildings by 2020 is to functionalise buildings’ façades. This means using their large surface areas to generate power through building integrated photovoltaics (BIPV) and solar air collectors, before storing it in batteries or heat stores for later use. In this interview, he explains the centre’s pioneering work with PVs and the emerging technologies that could help transform our power infrastructure.

Space heating is one of the biggest challenges in the drive to provide affordable, secure and low carbon energy. It accounts for nearly half of the energy consumed in the UK and about a third of our carbon emissions.

But as long as gas remains the primary energy source for heating, delivering UK carbon reduction targets would be impossible, says Worsley. 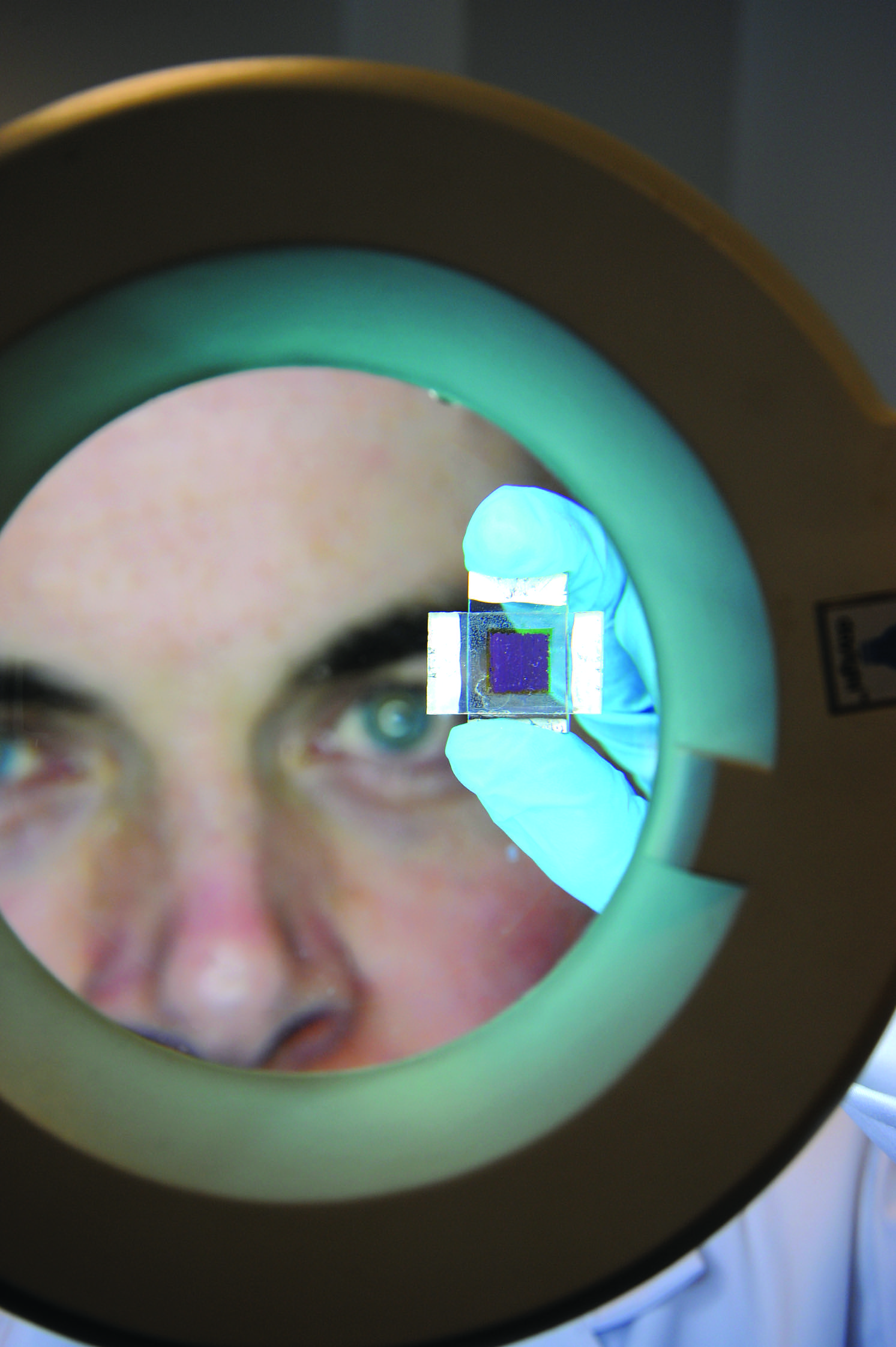 Dave Worsley with a PV cell

Huge fluctuations in UK gas requirements are driven by space heating – at peak demand in winter, we use five times more gas than electricity. Worsley says: ‘There is not enough capacity in our electrical grid to meet the demand for heating, so we must find alternative solutions.

‘Buildings have large surface areas – glass, metal and tiling – just sitting there at the moment, getting rained on. They are actually a dumb product – just keeping the weather out. We know the sun doesn’t shine every day, so we have developed ways to store solar energy in batteries or heat stores in the summer, and use it in the winter.’

Instead of being net users, Worsley argues, buildings should become net producers of electricity, akin to small power stations.

The Specific centre – together with many academic and commercial partners – is developing a range of solar-cell technologies and processing techniques that will allow high-efficiency thin-film PVs to be manufactured at scale, using earth-abundant, low-cost materials. The team is also investigating inter-seasonal solar heat storage using thermochemical materials.

The technology is already being taken to the next level, however, after the development of perovskite thin-film solar cells, which are lightweight, flexible and can be printed directly onto glass or metal.

Widely hailed as the next big thing in solar technology, perovskites – pioneered by the University of Oxford and Imperial College London – work well in low-light conditions, such as those in the UK. One of the main benefits of this technology will be low-cost energy generation, targeting a 50% reduction in current solar costs. 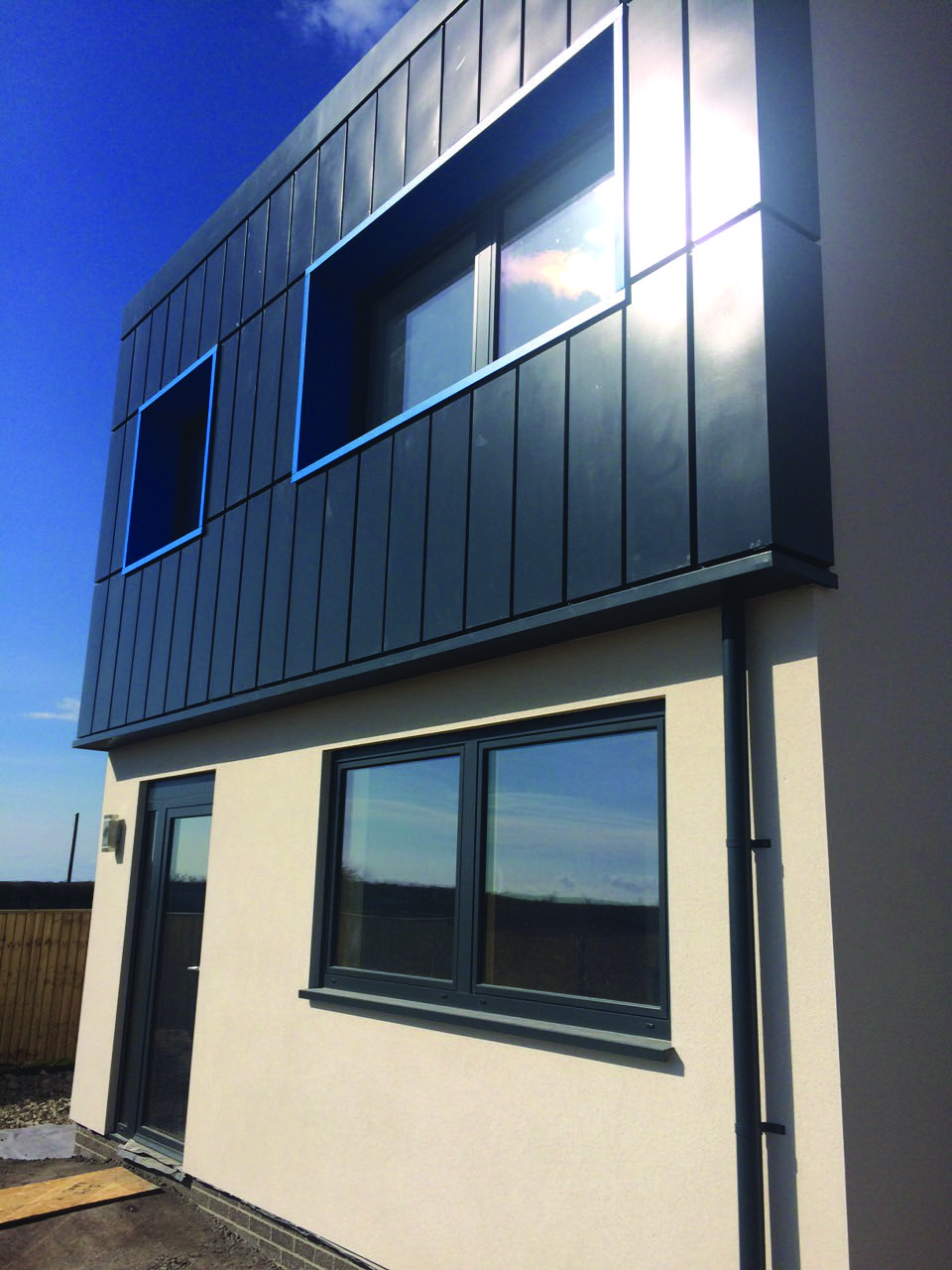 Specific and Cardiff University have created a prototype, low-cost energy smart house, capable of exporting more energy to the national electricity grid than it uses.

The glazed solar photovoltaic panels are fully integrated into the design of the building, allowing the roof space below to be naturally lit. This has been designed to reduce the cost of bolting on solar panels to the roof.

Heating is supplied by passing external air through the solar air collector and a mechanical ventilation heat recovery (MVHR) unit. Exhaust air is passed through the MVHR and then an exhaust air heat pump, which heats the thermal water store, heating domestic hot water. The heat pump is powered by the PV and battery-storage system.

The three-bedroom house, which combines the best off-the-shelf technologies in a unique way, uses grid electricity supply only when the PV-battery system is exhausted. The predicted energy performance is 70% autonomous, with a 1.75 grid export-to-input energy ratio.

Printing perovskites onto glass makes a semi-transparent coating that is ideal for BIPV applications, capable of generating a significant percentage of the building’s electrical energy requirements directly from sunlight. But to be commercially viable, perovskite cells must be quick and cheap to manufacture at scale, says Worsley. One of the biggest manufacturing bottlenecks is the annealing of the active perovskite layer, which takes up to 90 minutes in an oven at 100°C.

Over the past four years, Specific has developed near-infrared heating for a range of drying and curing processes in solar cell manufacture. This has reduced the perovskite annealing step from 90 minutes to less than three seconds, with little impact on performance. ‘Importantly, the annealing step can be done as part of a continuous reel-to-reel manufacturing process, supporting rapid entry into the market,’ adds Worsley.

Worsley says the development of heat storage systems for use with solar air collectors is a big focus point for Specific. ‘With effective storage methods, our aim is to enable solar air collectors to deliver 100% of a building’s space heating requirements all year round.’ 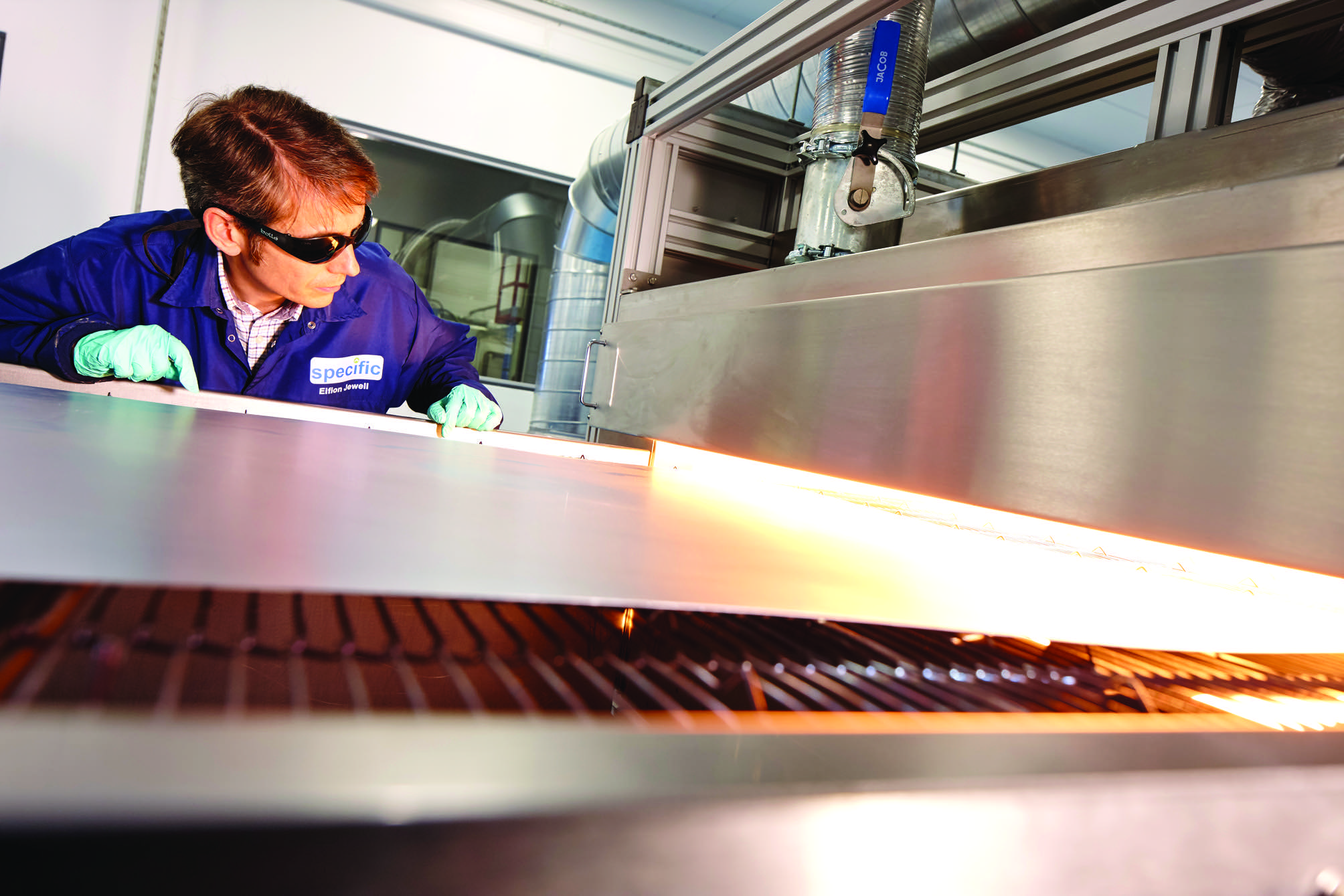 As well as generating electricity, the sun’s energy can be used to heat air for space heating or ventilation. Solar air collectors are installed as an additional micro-perforated steel skin onto a wall or roof, creating a cavity of heated air between the building and the metal. The heated air is drawn from the cavity and put through a low-energy 0.5kW heat pump that converts the air to a much higher-grade heat, which can be used immediately or stored in a large water tank for later use. Day-to-day (diurnal) heat stores collect the excess heat generated during the day for use the next morning.

This technology has been trialled by Specific at the solar heat energy demonstrator (Shed), a 1990s industrial unit, in Port Talbot. Here, a 590m2 solar air collector – combined with a 20m3 thermal store, heat-exchange system, with heat-pump boost – have led to the decommissioning of the gas-fired boiler. Now, 40% of the building’s heating comes directly from the collector and 60% via the solar store.

Specific is developing ways to store low-grade heat generated during the summer months and release it, on demand, during the winter. The team is working with thermochemical materials that use completely reversible chemical reactions to store and release heat.

Worsley says Specific, in partnership with the University of Nottingham and the British Iron and Steel Federation (BISF), developed a cheap vermiculite material – a type of hygroscopic salt that takes on, or loses, water – to create a seasonal heat store. 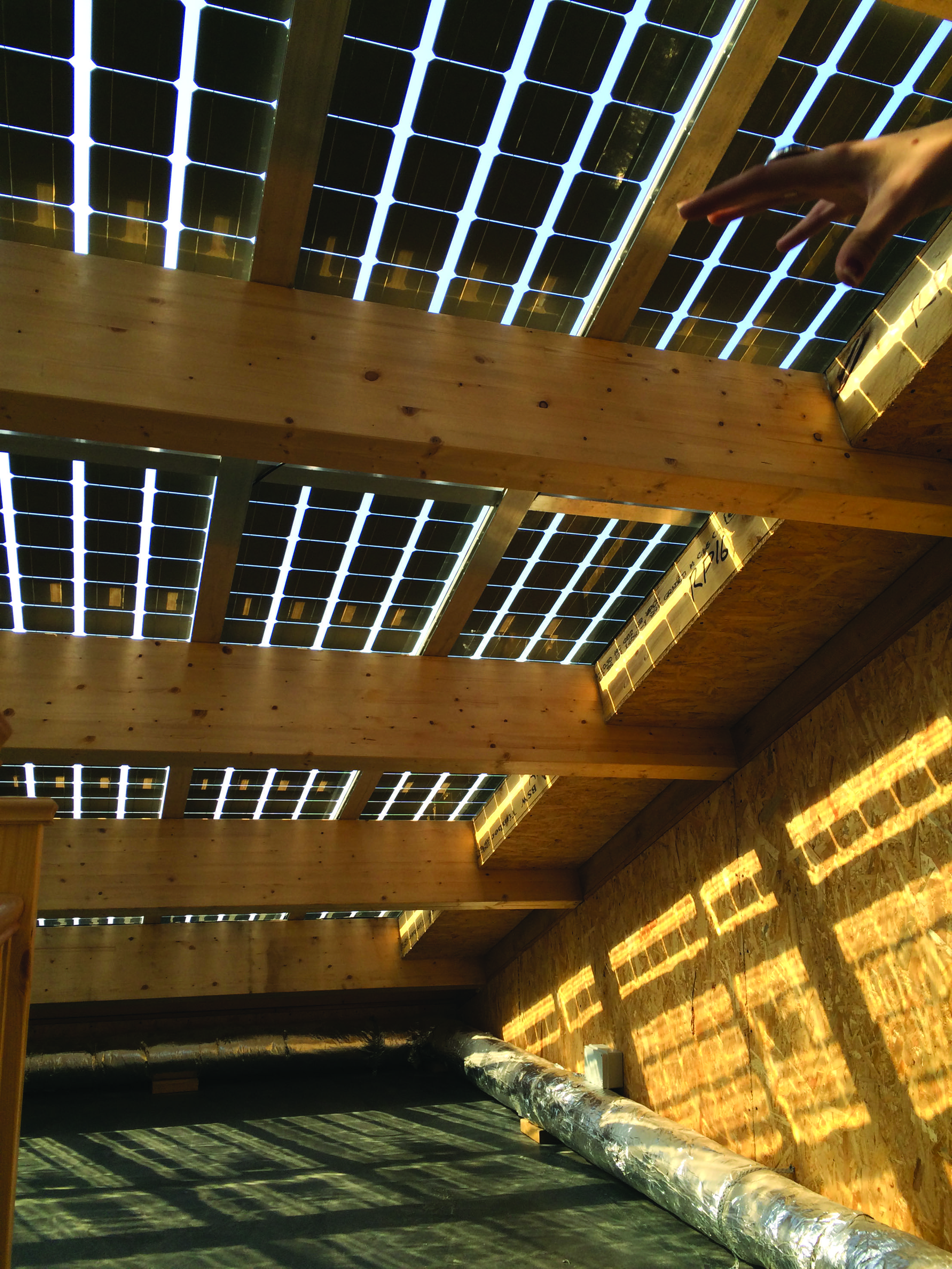 ‘The salt is dried out during summer and then, when it’s exposed to cold damp air in winter, the moisture goes back into the salt, releasing hot air,’ explains Worsley.

Specific is completing a large-scale demonstration of the inter-seasonal heat storage system at the Shed. It consists of a roof-based solar thermal collector, with a dry vermiculite mix that stores summer heat for use in the winter.

Worsley says: ‘Offsetting our limited electricity generation capacity by using stored heat during winter is game-changing. This system could have a substantial impact on the UK’s power infrastructure if implemented in several hundred thousand new homes that the government wants built over the next two years.

‘We believe using an active building concept will create a more pleasant environment for people to live in, rather than a passive framework building that can be stifling in terms of the number of air changes.’

Worsley says this renewable energy solution is perfect for large industrial buildings and supermarkets because it’s less disruptive to occupants, and cheaper than insulation.

Worsley says Specific plans to install its renewable systems into 108 new and existing buildings over the next few years to test the technology and collect data. The centre has big ambitions for its solar installations. By generating 10GW peak electricity from BIPV (equivalent to five coal-fired power stations), Worsley says the technologies will reduce carbon emissions by six million tonnes per year within the next 10 years.

‘We have done 26 buildings so far, and it has been a steep learning curve,’ he adds. ‘The application of smart solar technologies has the potential to be transformative. The future of solar really is exciting.’