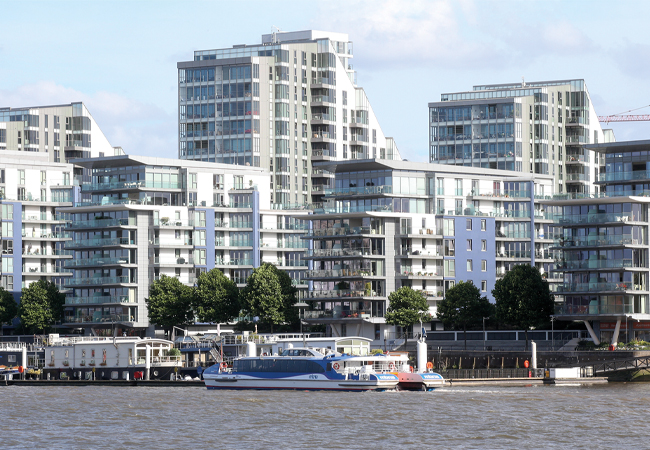 Wandsworth Riverside Quarter has an ATES built by IFTech

Heating and cooling buildings with electricity, rather than gas, is seen as essential to the UK hitting its 2050 net zero targets. With green hydrogen for heating not expected until at least 2030, the transition to all-electric buildings is in full swing.

Heat pumps are now the default specification on new schemes and retrofits, but there are concerns that the demand for electric heating and cooling – as well as charging for electric vehicles – will be too much for grids to cope with.

Developers are having to factor into their projects the costly upgrade of electrical infrastructure. The all-electric Convent Way housing development in west London, for example – featured on page 34 – is facing significant infrastructure costs because of local grid constraints.

One way to reduce a scheme’s electrical power requirements is to store power from renewables and waste energy on site, through the use of battery or thermal energy storage. Storing heat and coolth evens out the demands on the power grid, reduces energy bills for consumers, and cuts carbon emissions.

Aquifer thermal energy storage (ATES) is a seasonal storage technology that is experiencing renewed interest as building owners strive for net zero and reduced bills. Well established in the Netherlands and Belgium, ATES is an open-loop system that stores coolth and heat in two aquifers at up to 250 metres underground. It can be used in conjunction with individual buildings or energy networks.

UK heat pump manufacturer Clade has partnered with Belgium ATES company IFTech to promote the technology in the UK market. IFTech has already built 10 aquifers in the UK, but thinks there is plenty of room to grow. ‘As we overload the Grid, and as renewables become more dominant, we need to manage both sides of the Grid – demand and supply,’ says Raf Schildermans, director at IFTech. ‘ATES systems allow you to do this on a seasonal basis.’

In IFTech ATES systems renewable and waste energy generated by developments is stored at temperatures of 7°C and 17°C in cool and warm aquifers. In the summer, thermal energy is extracted from the cool aquifer to provide cooling and, in the winter, thermal energy from the warm store can be used for heating.

Aquifers can be injected with waste heat and cool, from the building or energy network, that would otherwise be lost to the atmosphere. For example, the waste heat generated by a heat pump when providing cooling in summer can be injected into the warm store, to be used in the winter for heating. 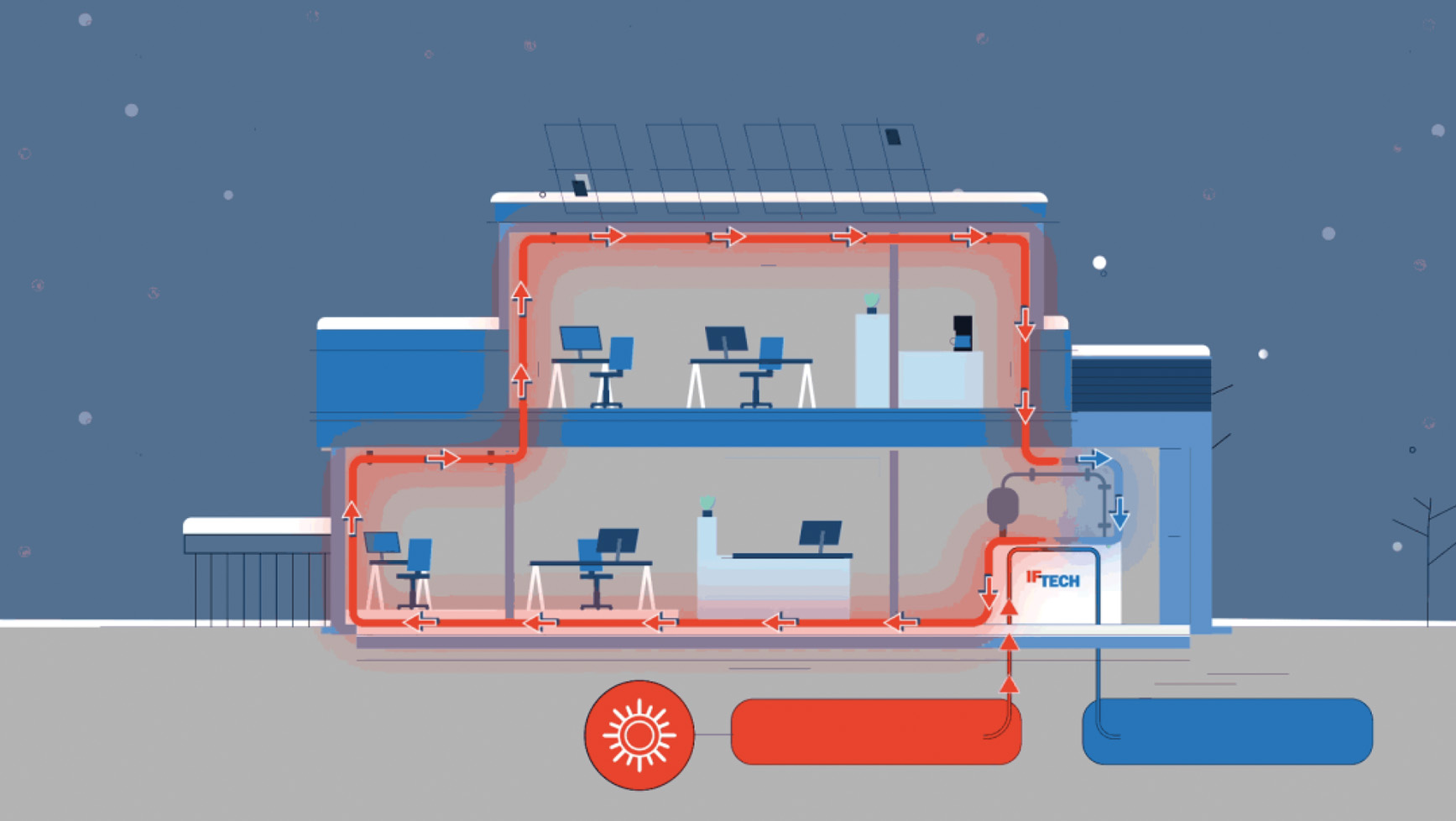 Heating in the winter with summer heat

One project is at Wandsworth Riverside Quarter, where an ATES works across an energy network delivering 1.80MW of heating power and 2.75MW of cooling. The system of eight wells reduces the development’s annual carbon emissions by 450 tonnes.

Another project is at the National Maritime Museum in Greenwich, which had an ATES with heat pump installed in its new South Wing in 2011. Heating and cooling capacity is 300kW and 350kW respectively.

The key to a well-performing system is maintaining the delta T between aquifers at 10K, says Schildermans. ‘If you don’t safeguard the delta Ts, your efficiency won’t be any better than an air source heat pump,’ he adds.

The set-up consists of the storage water system and a geothermal energy centre. The control unit must allow the system to be monitored and charged remotely. ‘It’s important to safeguard yields. We monitor temperatures, flows and energy balance,’ says Schildermans.

Software generates a monthly report showing heating and cooling and the coefficient of performance. ‘You can see yield and temperatures decreasing gradually, so there is time to mitigate any problems,’ says Schildermans.

One issue is a building using more heating than designed for, meaning temperatures fall in the warm aquifer. To maintain temperatures in the aquifers, the system provides cool or heat via dry coolers or heat pumps. Ideally, you don’t want to use these ‘balancing assets’, as they will require power and decrease the system’s efficiency. 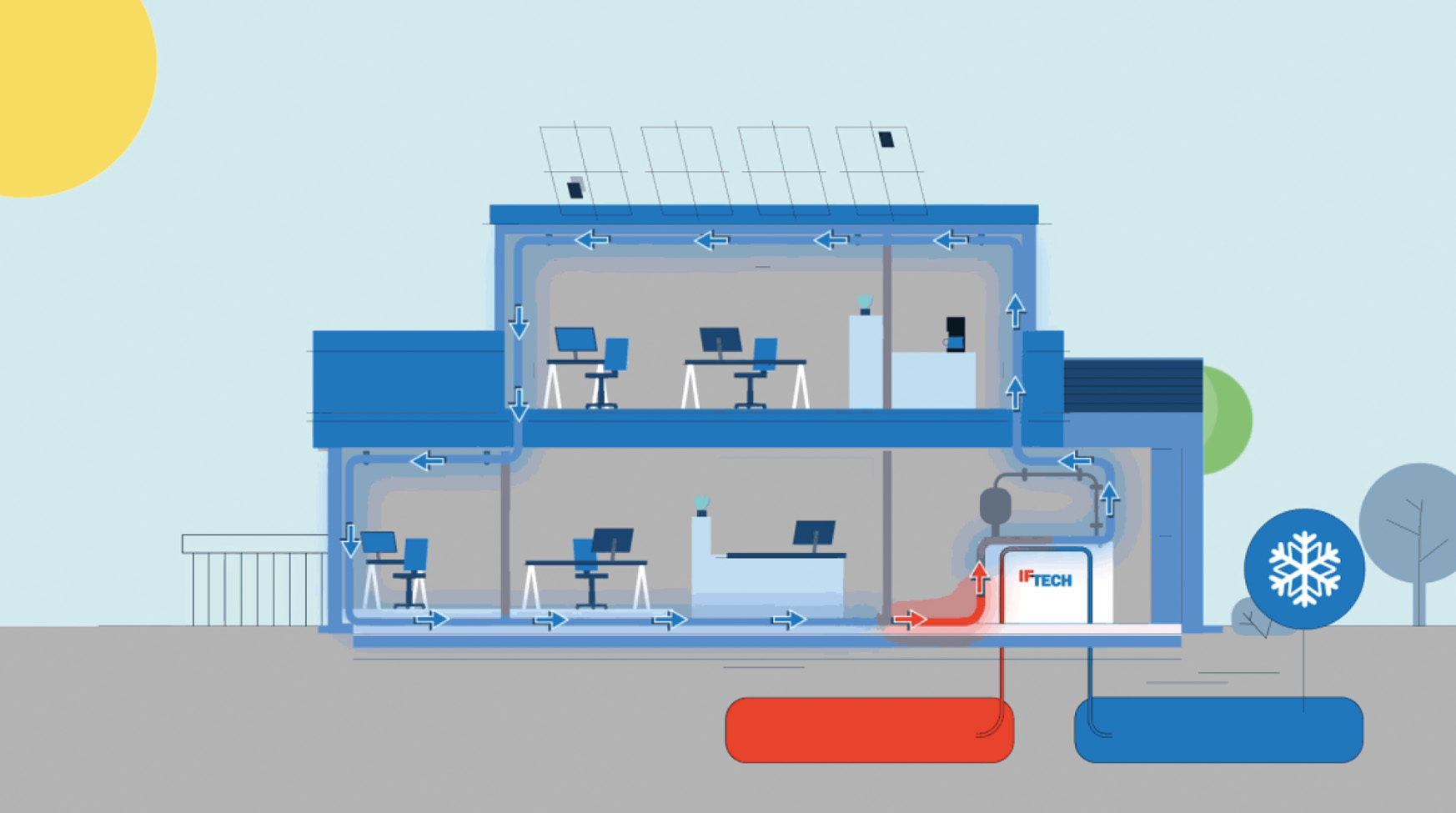 Cooling in the summer with winter cold

Smart energy grids are making it more cost-effective to charge the aquifers. ‘If we need more heat, we can charge the aquifer when there is a lot of PV production on sunny days, for example,’ Schildermans says.

Charging the cool aquifer is more challenging, as the average price of electricity in winter is high – but passive cooling is possible, says Schildermans, because you can use electricity powered by wind, or at night when there is less demand and it is cheaper. Cooling is the ‘real power’ of ATES, he adds: ‘There is no more efficient technology. You earn your return on investment rapidly because of the high price of cooling.’

As maintaining the ATES is so important, the company offers an ‘energy as a service’ model, where clients pay a yearly energy cost for guaranteed performance from the ATES. This can include costs for electricity, exploitation, maintenance and even investment.

ATES can work on ambient networks with decentralised heat pumps serving apartments, or on a centralised system where one heat pump can produce water at higher temperatures

Operators of ATES networks can help balance the system by offering incentives to occupiers to heat or cool buildings. They may give away cooling if it helps charge the heating aquifer when needed. In one ATES in Germany, Schildermans says traffic-light signals indicate to occupants how expensive it is to heat or cool at any one time.

ATES can work on ambient networks with decentralised heat pumps serving apartments, or on a centralised system where one heat pump can produce water at higher temperatures. In Belgium and the Netherlands, they are working on bringing down the heat demand in existing buildings so that energy networks can move to lower ambient temperatures. ‘If users have high-energy distribution systems, that is demanding for a 5th-generation network. Ideally, you would carry out deep retrofits, so reduce heating demand,’ says Schildermans.

In the Netherlands, IFTech have established a series of aquifers over 10 years to deliver 25MW of cooling and heating to a mix of new and retrofitted buildings. ‘With this technology, you can be modular and drill wells when you need the extra capacity,’ says Schildermans.

So what are the opportunities in the UK? Tim Rook, Clade’s chief markets officer, says universities and hospitals are showing interest in the technology. ‘University energy bills are going up astronomically, so they have to have a serious look at what they are doing,’ he says.

Ground conditions must be well understood for drilling, says Schildermans. In London, the chalk requires certain materials in the casing to avoid corrosion, while filters are essential in sandy areas. It is also important to drill to the right depth to avoid the risk of not extracting enough water.

When designing the location of wells, heating and cooling bubbles must not contaminate each other, says Schildermans. A big system will have different warm and cold bubbles working together.