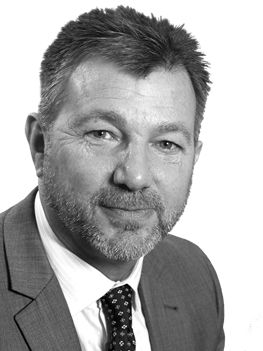 There has been lively industry discussion about the Government Standard Assessment Procedure (SAP) and proposed changes to the methodology – but why the widespread interest?

The purpose of SAP is to calculate regulated energy and associated carbon emissions in domestic buildings. However, some aspects are referenced by the Simplified Building Energy Model (SBEM), so the updates affect the commercial sector and non-domestic buildings.

The proposed changes sparked concern among stakeholders: first, that the updates could reduce the viability of heat networks, in conflict with the stated aims of the government’s Clean Growth Strategy; and, second, that significantly diminishing the value of embedded generation at building level would reduce investment and innovation in product development. 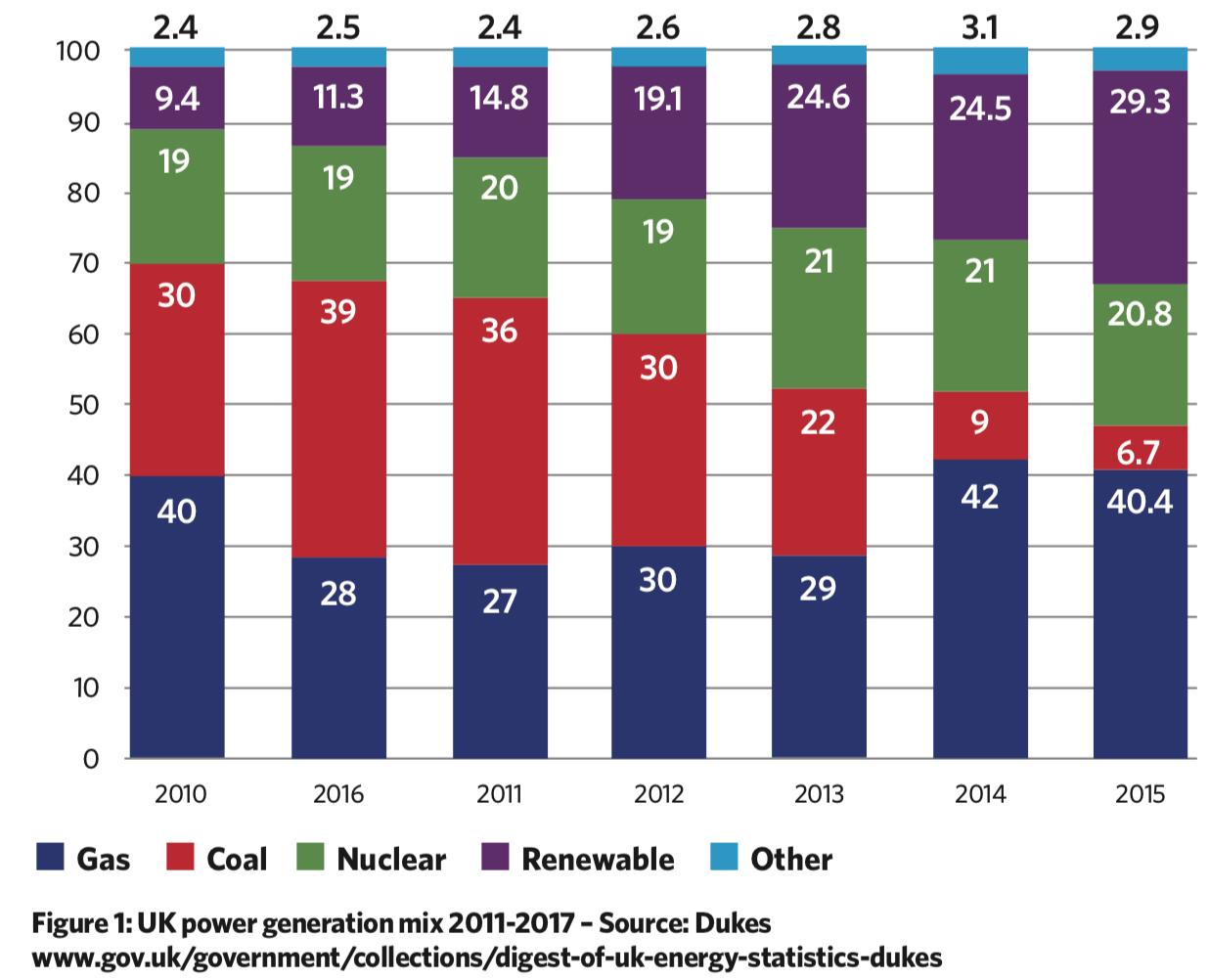 It’s clear the grid carbon value for electricity in SAP 2012 (V9.92), currently in use for Building Regulations compliance, is out of date. But is a 55% reduction to 233gCO2/kWh, and the use of an annual average methodology, an appropriate reflection of reality, especially when applied to seasonal loads such as space heating?

Looking at the Digest of UK Energy Statistics (Dukes), it’s evident that the fall in grid carbon intensity is attributable to the rapid reduction of coal-powered generation, which has largely been squeezed out of the mix by additional gas capacity and renewables (Figure 1). This downward trajectory will continue but, given the seasonal and even inter-day, variation of the generation mix – and the uncontrolled, intermittent nature of renewables – it is unworkable to continue using an annual average methodology in SAP.

If we take monthly grid carbon intensity figures from the past four years, a distinct seasonal pattern emerges (see Figure 2). Note, also, that the proposed SAP 10 annual average value is significantly lower than the greenest summer months on record of 2017. Why is this important? For technologies that only operate at certain times of the year – heating in the winter, cooling in the summer – an annual average value will over- or under-represent the actual carbon intensity at the time of use.

Surely a monthly evaluation and determination of the carbon content of building services is more appropriate, accurate and transparent for all technologies? Within SAP and SBEM, space heating and hot-water provision are already calculated on a monthly basis, so – from a methodology perspective – carbon or primary energy could easily be calculated in this way.

It is essential to bear in mind that SAP 10 has been published for information only and may change before implementation. The Department for Business, Energy and Industrial Strategy has confirmed that SAP 2012 must be used for Building Regulations compliance until any Part L consultation changes are known and an approved SAP is made available. A government consultation on this matter is expected this year. In light of this, the Greater London Authority’s decision to allow new development applications from January 2019 to use the annual average carbon values is surprising and, perhaps, somewhat premature. 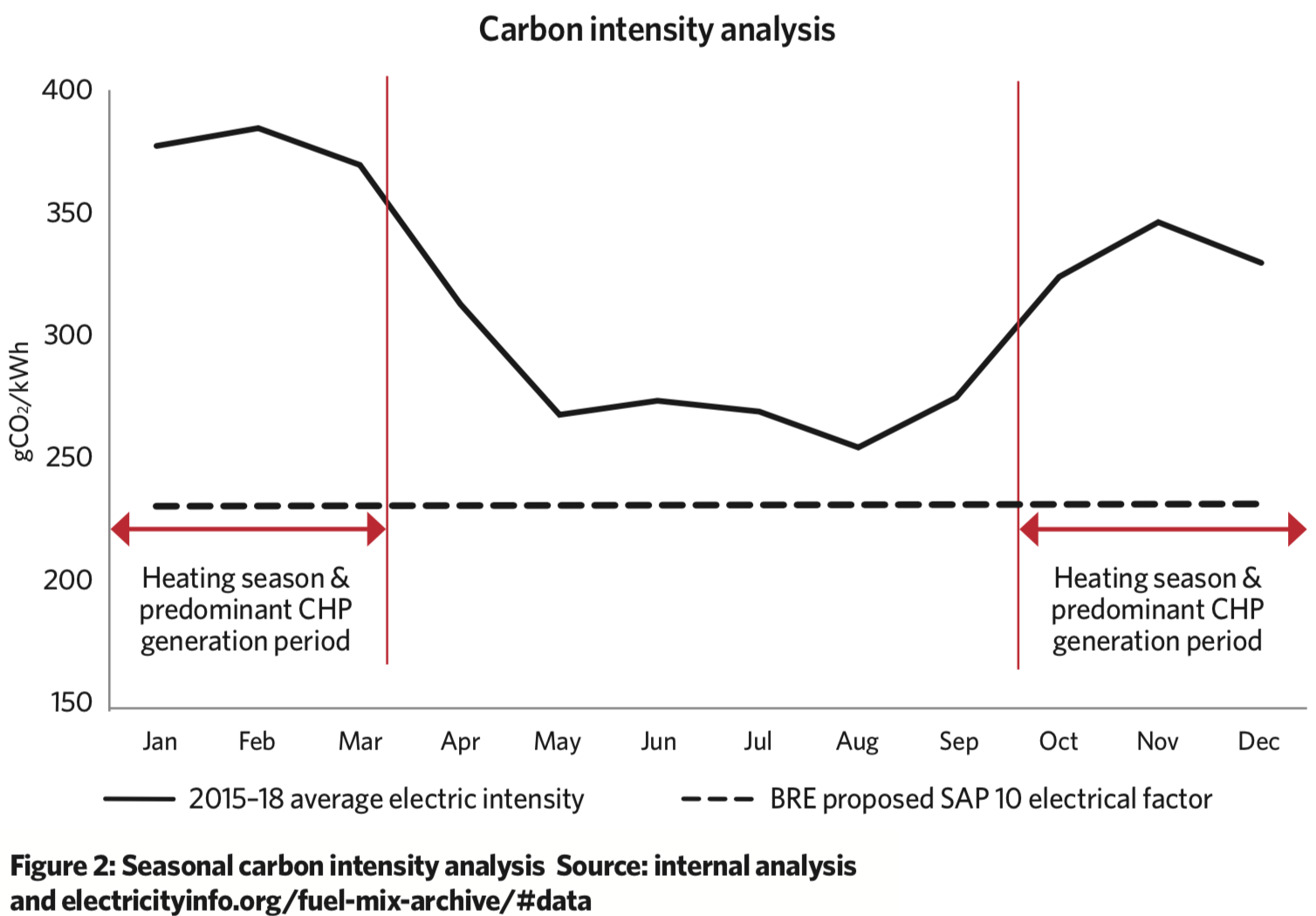 Approved Document L may undergo future revision, so it’s also worth considering the EU Energy Performance of Buildings Directive (EPBD). This requires the energy performance of a building to be expressed by a numeric indicator of primary energy use in kWh/(m2.y) for both energy performance certification and compliance with minimum energy performance requirements. In other words, the building compliance metric is expected to shift from carbon emissions to primary energy use. While this alters the outcomes on a technology basis slightly, the argument of seasonal variation in grid intensity still applies.

The proposed grid primary energy factor (PEF) in SAP 10 is 1.738, down from the 3.07 figure used today – and, again, it appears slightly optimistic. Interestingly, there has been a prolonged debate between the EU Commission and EU Council about the appropriate PEF to apply across other directives, such as the Energy Efficiency Directive and EcoDesign. The figure in the pipeline is a reduction from 2.5 to perhaps 2.1. Can we seriously suggest that the UK generation mix during the life-cycle of SAP 10 will be significantly cleaner than other member states?

Until the inter-seasonal storage of low carbon electricity generation is a reality, it’s imperative the changing generation mix throughout the year is reflected in national calculation models that avoid misrepresentation of actual energy and emissions use. Indeed, deeper granularity may be necessary for future smart-grid applications and time-of-use tariffs – down, perhaps, to half-hourly values.

Robust, validated data is available to support monthly values, so SAP 10 could be amended to a more realistic and representative model.