Spanish City, a collection of Grade II listed seaside leisure buildings and grounds that opened in 1910, was immortalised by Mark Knopfler in the Dire Straits song Tunnel of Love.

In its heyday, Spanish City attracted thousands of visitors to Whitley Bay from across the country. When built, its distinctive Andalusian-style white dome was the second-largest freestanding example in the UK after St Paul’s Cathedral. At the time, the ‘Hennebique’ patented system of reinforced concrete used was innovative.

Unfortunately, by 2010 the seafront attraction was in dire straits itself, having fallen into disrepair during a long period of decline. The building remained empty– but years of campaigning secured new investment to pay for conservation works.

Funding to cover the £10m restoration bill was obtained from the Heritage Lottery Fund, North Tyneside Council and a Coastal Communities Fund. Mott MacDonald was appointed by the council to provide structural, mechanical, electrical and fire engineering design services.

A defining feature of the building is its extremely complex geometry. With only four rooms that have walls in a square format, every other space is curved or a polygon.

There are two floors and a mezzanine, but many different levels within the building as there is a slight drop between the back of the building and the front.

The geometry and listed status of the buildings posed a major challenge to the design team tasked with integrating power, heating, lighting and ventilation systems without having an impact on the historic fabric of the structures. 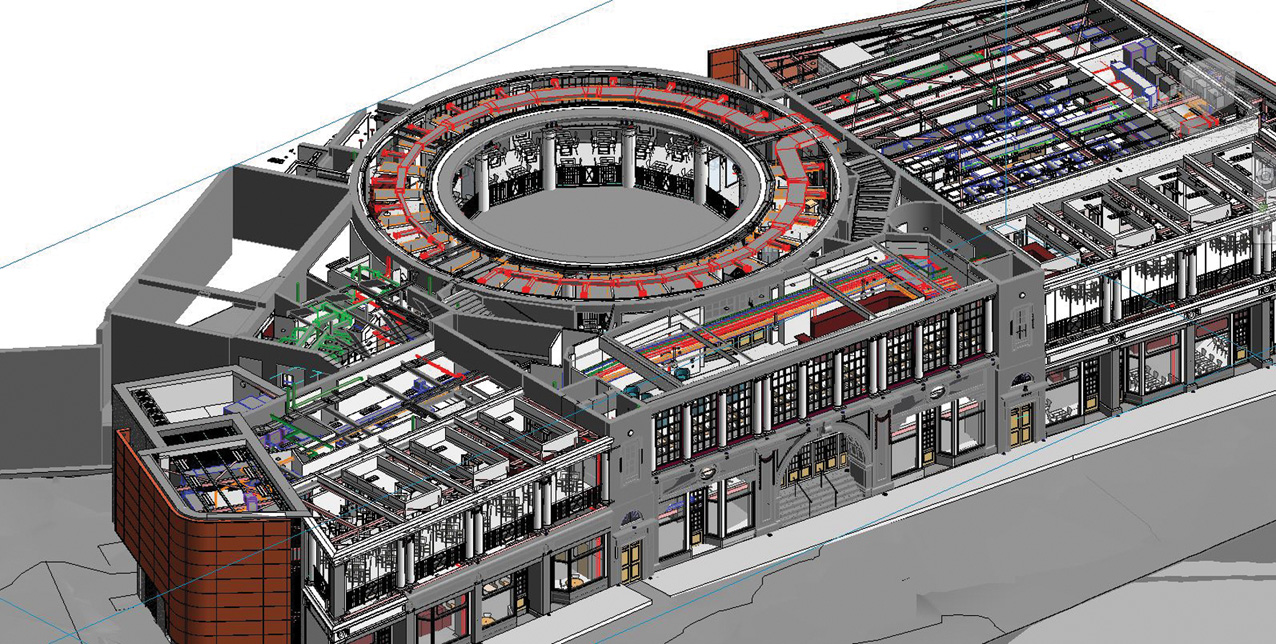 Because of the complexity and the absence of original drawings, the project team decided to have the whole building laser-scanned to create an accurate parametric 3D model, or a 3D point cloud. This data was converted into an information model used to design all the services for the building, as well as the structural engineering of two new side extensions.

Our data was fed into a cloud-based software platform, which meant Mott MacDonald, ADP and Robertson Construction were always working in a live collaborative environment, and different designs could be evaluated by the whole team.

Services had to be discreet and sympathetic to the existing building. None of the original services installations was fit for purpose so we had to start from scratch. At an early stage, primary distribution routes and strategies were determined, which allowed for coordination of services around the building.

A major challenge was trying to fit four large commercial kitchens – each needing an independent ventilation system – into a building that was not designed to have any. This required ductwork to run through areas with very low ceiling voids.

In one part of the building, we couldn’t fit the ductwork into the void at all. Instead, we had to run it across the roof, which was a sensitive area because it is visible from a terrace. By modelling it in 3D, we were able to check our design would look neat and unobtrusive. To minimise visual impact the height of the ductwork was maintained at a constant level and kept as low as possible. The ductwork was configured to avoid crossovers and finished in a similar colour to the roof.

The rotunda hall, directly underneath the dome, was another sensitive area. We were faced with the challenge of installing services without covering up any of the heritage features.

Where supply air enters at ground floor level we had to detail the ductwork to fit around existing lintels. It is introduced above a ‘floating’ raft of acoustic panels, radiant panels and lighting and extracted above them at first-floor level. Working in a 3D environment, we created visualisations of what the rafts would look like from the viewpoint of a person standing at ground level.

Heating is provided by gas-fired boilers feeding radiators, trench heating, underfloor heating and radiant panels throughout the building. Heat emitters were selected to suit. For example, heritage areas have column radiators, the dome and rotundas have underfloor and radiant panels, and newer areas, such as the fairground entrance and visitor toilets have modern panel radiators.

General supply and extract ventilation is supplied by an AHU in one of the four plant rooms located in the new extensions on the periphery of the building. Four supply-only units serve the four kitchens, again from the new plant rooms, and extract fans are housed on two external plant wells at roof level. The extensions reduced unnecessary adaptation to the historic footprint and fabric.

Even so, planning constraints restricted their size, minimising the space available for air-handling equipment. The 3D model enabled us to check that the ductwork configuration could be accommodated within these plant rooms with a greater degree of accuracy than could be achieved with traditional 2D methods.

The roof terrace serves up spectacular views of the coastline. To make the terrace fully accessible for visitors, Mott MacDonald’s fire engineers used the 3D model to generate predictive smoke models. The resulting fire evacuation strategy saw a single level lift installed in an empty shaft in one of the cupola towers for general disabled access and as an escape route. 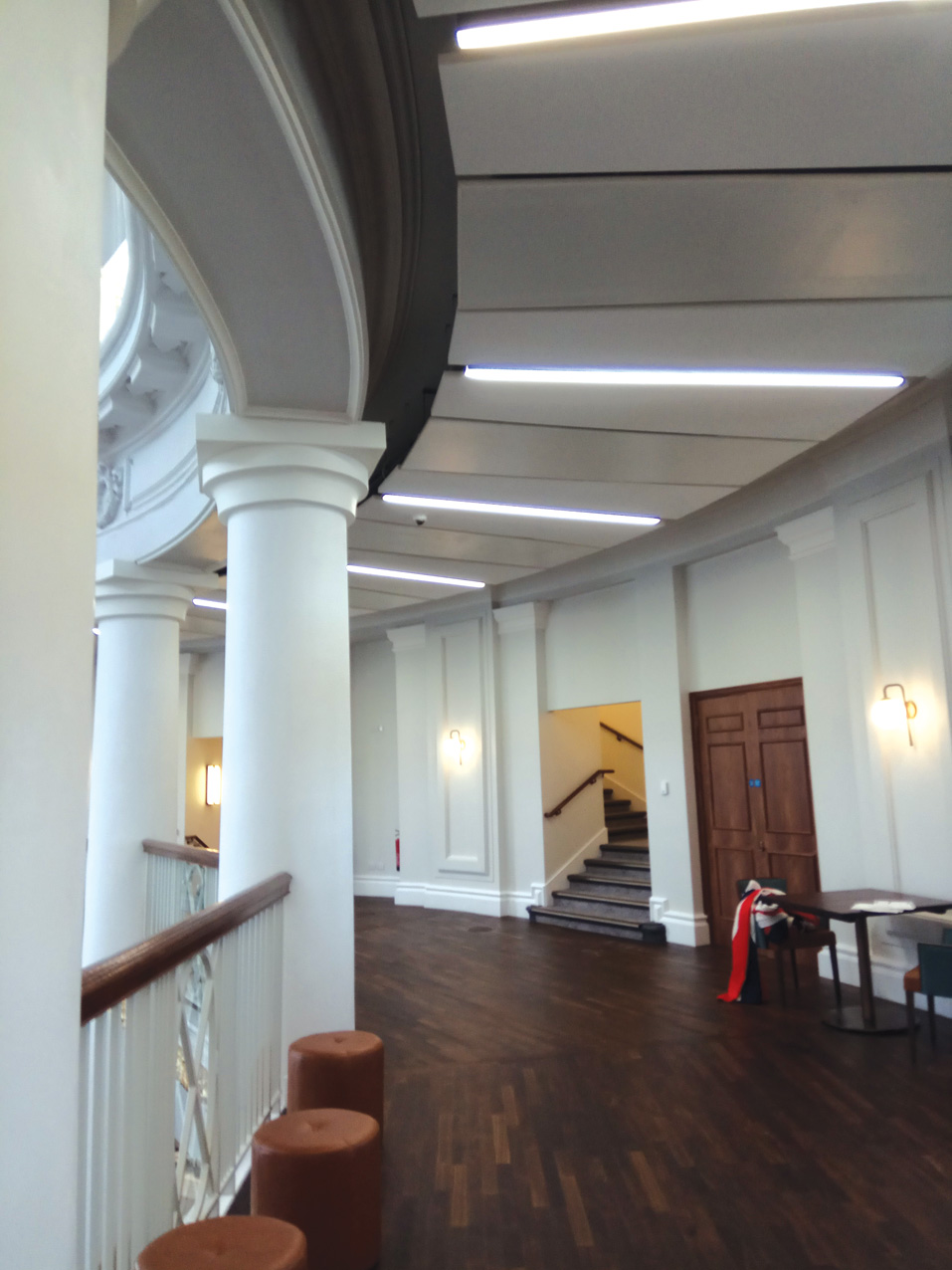 Ductwork is hidden above the ‘rafts’ . Credit: Mott MacDonald

The first-floor loggias, located on either side of a three-storey central block supporting the rotunda, were both originally open-air areas. The intention was to enclose these galleries with full-height windows that would open out onto terracing. When the design was quite well developed, the planners raised concerns about noise from wedding parties and functions and stipulated that these windows could not be opened.

We had to come up with a solution to ventilate these areas and accommodating different levels between the loggia roof and the rest of the building, making it difficult to pass services through.

The 3D model helped us to explore different ways of bringing in ductwork through bulkheads. Eventually, we came up with a solution using eyeball jet diffusers in a bulkhead along the back of the loggias.

Many original Edwardian details lost over the years have been reinstated in the refurbishment. Sometimes services design had to change when architectural features, hidden for decades, were revealed. For example, we took down the ceiling in one room and discovered a lantern light detail where we were planning to put in some ductwork. The lantern light was a historically significant feature so we had to use the 3D model to redesign the route around it.

Two years after restoration works began in August 2016, and several years after the venue closed to the public, Spanish City reopened last month. Historical features have been brought back to their former glory while modern leisure facilities have been incorporated, including cafes, restaurant, retail units and event spaces.

A unique visitor destination for the North East of England has been reawakened. It will be a catalyst for further investment and forms the centrepiece of the council’s £36m masterplan for the regeneration of Whitley Bay.

The building information model has been key to the success of this renovation project. The building is now much more heavily serviced than it was ever intended to be. Modelling has enabled us to integrate services sympathetically in a way that has minimal impact on the existing design.

Having the building scanned, and working in a 3D environment, also greatly increased the efficiency of the build. It meant we could detect clashes that we would not have picked up if we had been working in a traditional 2D environment. We were able to design services with a higher degree of accuracy than could be previously achieved, resulting in fewer on-site changes.

Building information models have only recently started to become the norm for new builds. They are rarely used for heritage projects. The renaissance of Spanish City demonstrates why we should do it more often.

Horses for courses – services at the new Cheltenham Racecourse grandstand