Located next to London’s O2, the five-star InterContinental Hotel is the centrepiece of a new, mixed-use development on the River Thames. Completed last year, the 19-storey, 453-room hotel and conference centre forms part of a scheme by Grove Developments for Arora Hotels, and includes 140 apartments in the 24-storey Arora Tower.

The hotel’s leisure facilities include a health spa, several restaurants and a 3,100m2 ballroom, which has room for 3,000 seats and can be divided into 14 independent zones. There are 19 additional meeting rooms in the conference centre, as well as an organiser’s office and 1,600m2 of pre-function space.

The developer wanted a highly sustainable scheme, and the hotel was designed to achieve Breeam Very Good, while the residential units achieved level 4 of the Code for Sustainable Homes. To meet green targets, the project team specified low-energy heating, ventilation and air conditioning, and proposed the scheme be connected to the Greenwich Peninsula district heating system, operated by Pinnacle Power.

For the hotel, it was critical that the heat network delivered the performance expected by guests of a five-star hotel. The requirement was for a resilient system able to supply year-round heat with a highly variable seasonal load; there was no option for downtime in the heating system. 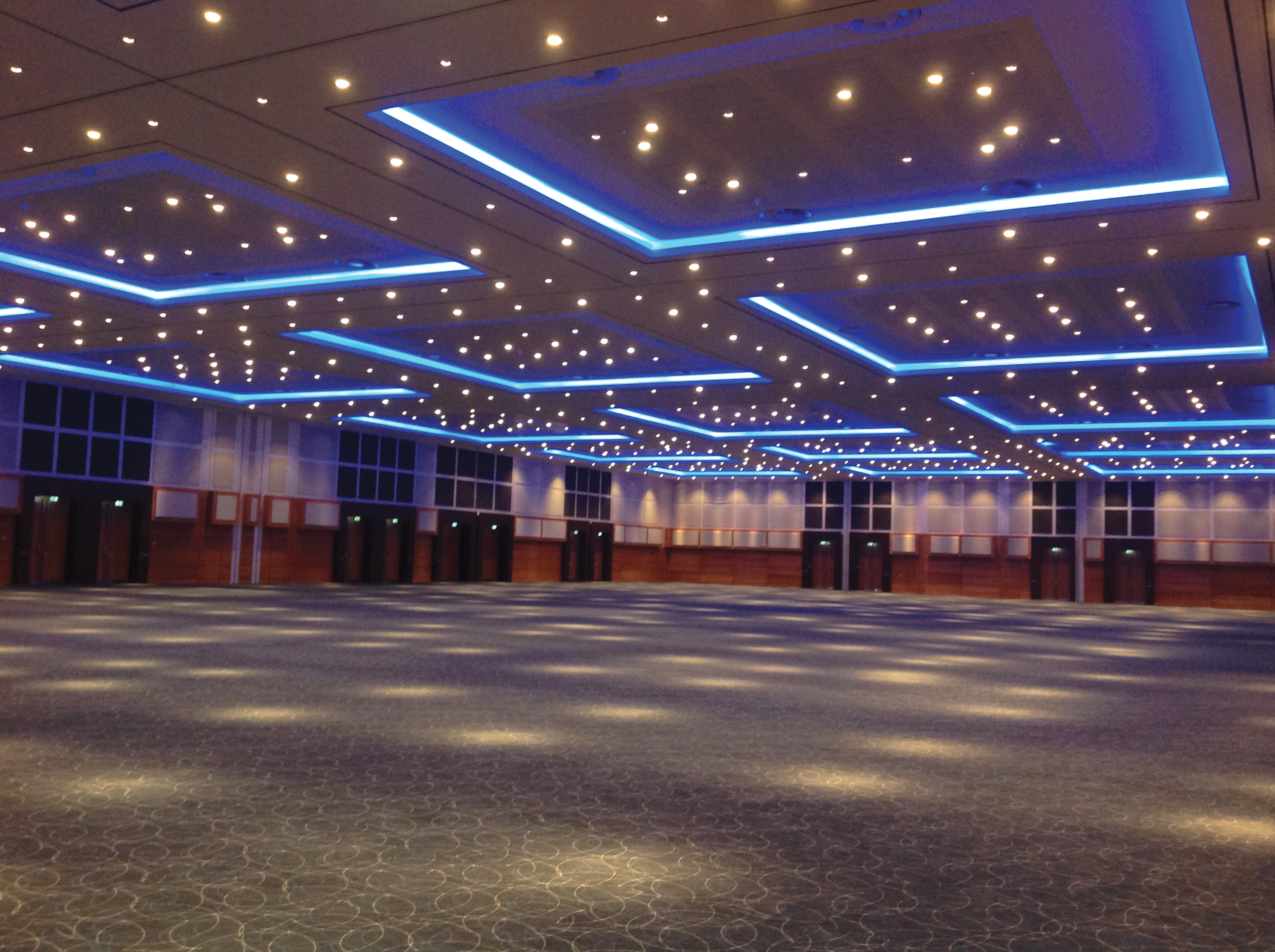 The hotels 3,100m2 ballroom can be split into 14 separate zones

Aecom was the building services consultant on behalf of the developer and client, and worked with contractor Balfour Beatty and building services contractor HE Simm to progress the services design through to construction. Project director Matthew Hignell says they discussed with the client whether to opt for a stand-alone system – with its own CHP, and separate energy generation – or to connect to a heat network. ‘Relying on another organisation to provide a hot-water system is a sensitive issue for hoteliers,’ says Hignell. ‘It was a challenge to persuade Arora that this would be a safe and reliable way of getting energy.’ Having been involved in previous hotel schemes, Aecom was familiar with concerns about redundancy and backup in the central system, as well as reliability of power supply and heating and cooling. Heating for hot water is in particular cannot be allowed to fail.

Connecting to the heat network would reduce plant capital costs and free up more space on the development. The carbon cost of the energy is also reduced, says Hignell. ‘Typically a good heat network offers 0.15 kg CO2 per kWh compared with around 0.25 kg CO2 per kWh for standard gas boilers. Pinnacle also offered an improving carbon performance in the future as the peninsula network progressd and more efficient central plant was installed.’

Pinnacle had one central energy plant, but another had to come online before the hotel opened. There were concerns that the extensive works could delay and disrupt the installation of the heat network infrastructure. ‘We offered space in the building so Pinnacle could provide backup, which gave the client reassurance that heat would be available when the hotel opened,’ says Hignell.

Space for the backup plant was found on the roof of the conference centre, between two air heating unit (AHU) plantrooms, and it was sized to supply about half of the hotel’s total load. As well as giving assurance to Arora at the opening, it adds resilience to the system, and will allow the hotel to keep functioning in an emergency or during maintenance. The backup plant was connected to the main heat network, to give more redundancy for the larger system.

Finding space for the site’s utilities was another challenge, says Hignell, because of issues over land ownership and the proximity of the O2 Arena, which meant there was limited space for pipework. There was also limited capacity in the high-voltage electricity supply, because of competing developments. (See panel ‘Power supply’ below)

There was limited capacity in the local high-voltage (HV) power supply in the early days, and several competing developments, according to Hignell.

‘A lively debate took place concerning how much supply we could take into our building, where to site the transformers, and how to route the HV cables onto the site,’ says Hignell.

There were questions over how much electrical load would be needed – in particular, for the conference centre and ballroom, with up to 3,000 guests.

‘The question was, how do you size the incoming electrical supply so that you don’t blow the transformer without putting in a huge system that’s only used for a few minutes a year? That was quite a challenge.’

Hignell says they looked very carefully at loads and discussed with the hotel what else would be operating in such circumstances. A workable solution was agreed with the client about how they would operate the system, which included a robust strategy that enabled them to be adaptable enough to meet client demands, now and in the future.

‘It was a lot of engineering judgement, and I think we got it right,’ Hignell says. ‘The performance so far seems to have validated our predictive studies.’

A big challenge with using the district heating system is the seasonal loading issue that is common to the sector. ‘Hotels demand a lot of hot water, so you still have quite a significant load in the summer – which is good for the district heating supplier,’ says Hignell. ‘But the difficulty is that the load is quite spikey. There are significant periods in the summer when the AHUs have limited heating load, but hot water is still needed, particularly for the morning and evening peaks.

Pinnacle’s control arrangements were adopted and the equipment in the hotel sized to work off the wide temperature difference – 70oC flow, 40oC – return required by the district heating system. It required the reselection of the coils on the AHUs and other heat emitters. The systems were already using two-port control but the volumes and the principal pipe runs were reduced and the pumps came down in size. Hot water cylinders were modified to include external heat exchangers.

However, under low load, the temperature of the return water drifts up. Limiting this is key to the district heating efficiency and this is achieved by limiting the flow on the heating circuits using two-port valve arrangements and variable speed pumps. The arrangement needs to ensure hot water is available where it is needed but is not pumped unnecessarily to all other areas. There is a balance as some keep warm bypasses are needed and the final arrangements are building specific.

To what extent the district heating system contributes to carbon savings in the hotel’s energy usage depends on the carbon balance of the system as it develops in the future. As more energy centres are built – and more buildings come on line – larger CHP plant and other lower-carbon technologies should enable the carbon content for the heat network to be reduced. In the meantime, other specified low-carbon technologies improve energy efficiency and reduce consumption.

‘The efficiency of the AHUs and the variable refrigerant flow (VRF) cooling systems are important elements,’ Hignell says. ‘We installed water-cooled VRF to the bedrooms, which was an efficient way of delivering heating and cooling. We looked at the total load on each floor, rather than an individual room being sized simply on the maximum or minimum load.’

By considering the diversity factor for each floor – how likely it is that the air conditioning in each room is going to be on at the same time – Hignell’s team was able to reduce the total load. The VRF also helps to minimise distribution losses. ‘The use of VRF allows you to pump water around the building at a lower temperature, so you’re not pumping hot water in large quantities,’ Hignell says.

Delivering an efficient, but flexible, air conditioning and lighting solution for the ballroom area – while allowing for the configuration of 14 different zones at other times – was another challenge. A separate AHU was supplied for each zone, and controls ensured they worked together when the spaces were combined. 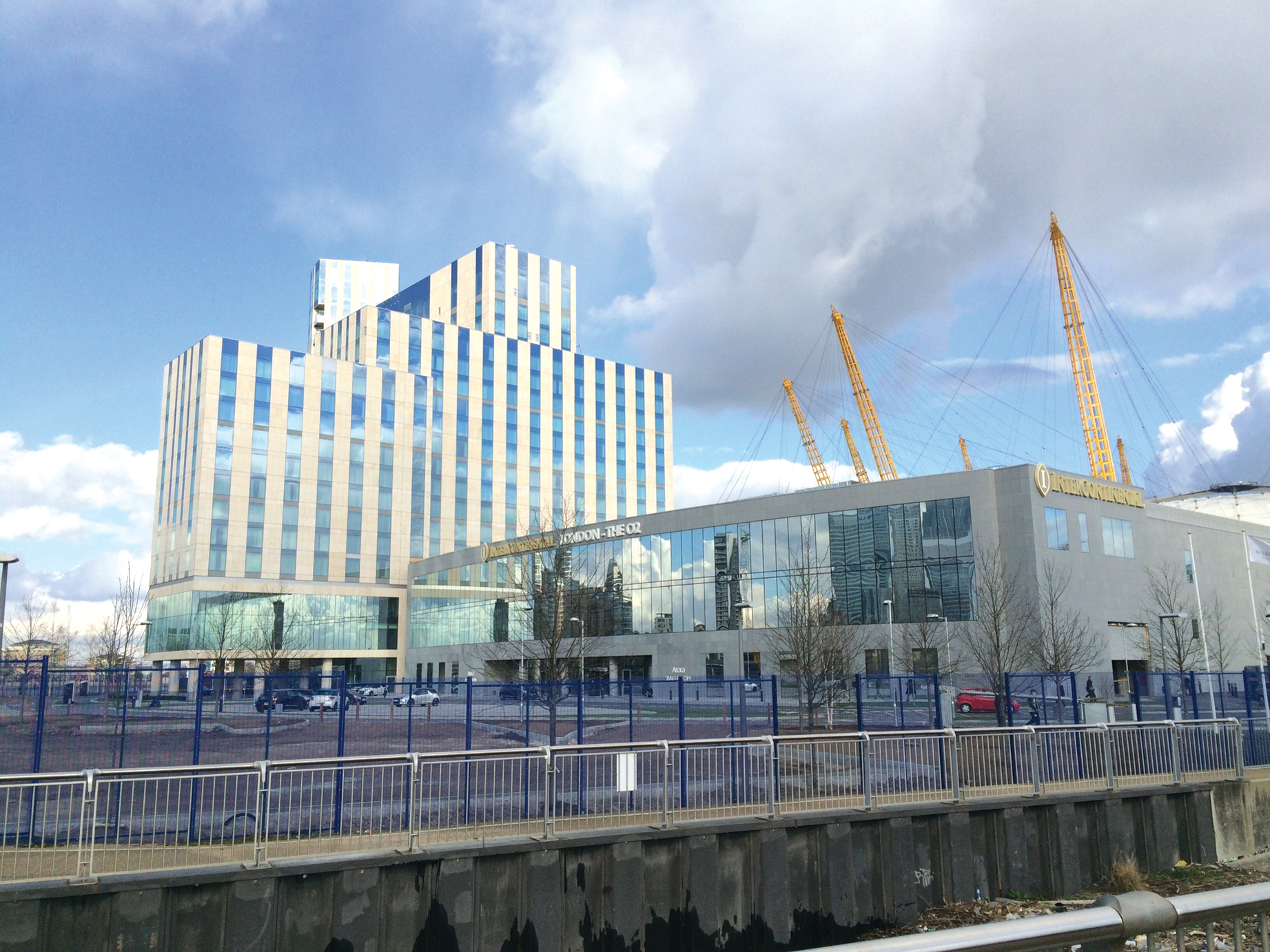 The main ballroom spaces are served by a variable air volume (VAV) system with interlinked controls. This allows them to respond individually or as a group but in essence each VAV box controls its own area with the set point being adjusted centrally. There are six principal zones each with an AHU. The outer zones which split into 3 further subzone are fed from a single AHU with a VAV box in each subzone.

‘We have a general policy of keeping the air handling units as close to the areas they serve as possible and as much as possible limiting the number of different spaces served off each AHU,’ says Hignell. This keeps duct sizes down and simplifies the operation as it is clear to the operations staff what plant can be turned off or set back.

While the AHUs offered flexibility, they presented a problem because of the extra space they took up, and the supply and extract going from – and returning to – the same spot, rather than to a remote extract. ‘They are very heavily serviced with fresh air to maintain the space at the right environment. It was a fairly lengthy part of the design process to get the AHUs in the right place – to get them to fit.’

That adds to plant volume. For a hotel such as Intercontinental O2, the public entertainment spaces are key, says Hignell. They need substantial amounts of fresh air when they are fully occupied but this is often for limited periods. The air systems must be able to respond quickly and have the capacity to deliver the necessary fresh air quickly. To be energy efficient they need to turn back down quickly when the space becomes unocccupied, says Hignell. ‘By having dedicated AHUs it is easier to understand which units are needed and which can be turned down.’

The performance of the building is being monitored closely to make sure it is delivering on its promises. Hignell says that, as with any large development, there has been a learning period to understand how best to operate the systems. However, they appear to be delivering the right environment conditions.

Arora centrally monitor their energy consumption to allow them to benchmark all their properties. These figures are collected, collated and presented at each accounting period. Discrepancies and anomalies are followed up by their in house operations team.

‘The Intercontinental O2 is a key user of the heat network, as it gives it operating load in the summer. It’s a win-win situation.’