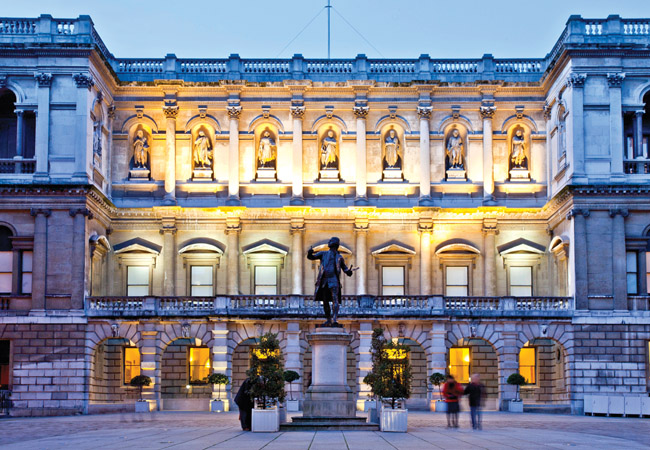 The Royal Academy of Arts (RA), on London’s Piccadilly, will celebrate its 250th anniversary next year, honouring its remarkable history as a place to make, exhibit and debate art. To mark the occasion, a stunning transformation of the Academy’s buildings will be unveiled, revealing plans to open up the RA as never before.

Led by internationally acclaimed architect David Chipperfield – and supported by the Heritage Lottery Fund (HLF) – the £50m revamp will link Burlington House, on Piccadilly, and the Burlington Gardens building behind, to unite and revitalise the two-acre site. 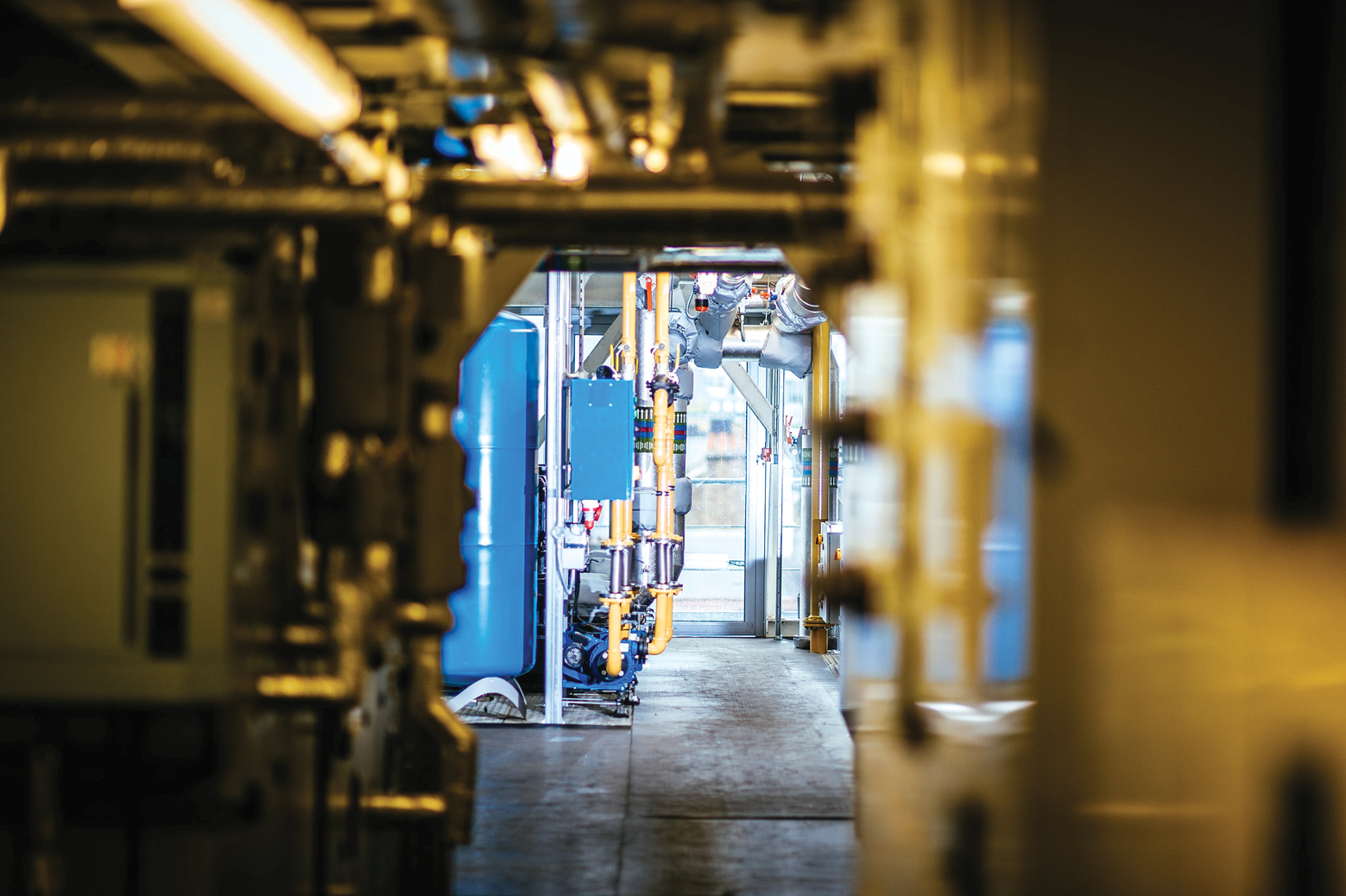 New public areas will be created, including dedicated spaces for exhibitions and displays of the RA’s historic collection, contemporary art projects, and new work by Royal Academicians.

A double-height lecture theatre, with more than 260 seats, will enable the Academy to build on its rich heritage of rigorous and lively debate. New facilities will enable it to offer a better welcome for visitors and there will be an expanded learning programme, as well as more spaces for the RA Schools.

Running alongside the Chipperfield masterplan is a massive gallery refurbishment and plant upgrade programme. The phased delivery has resulted in the mechanical and electrical (M&E) services that supply condition-critical exhibition spaces throughout the building being overhauled. Older equipment nearing the end of its life has been brought up to date, while plant has been shifted away from valuable basement space to new rooftop locations.

‘The majority of the galleries were run off old DX [direct expansion] units that were at the end of their useful life,’ says Kyle Peters, senior project manager and client representative at the RA. 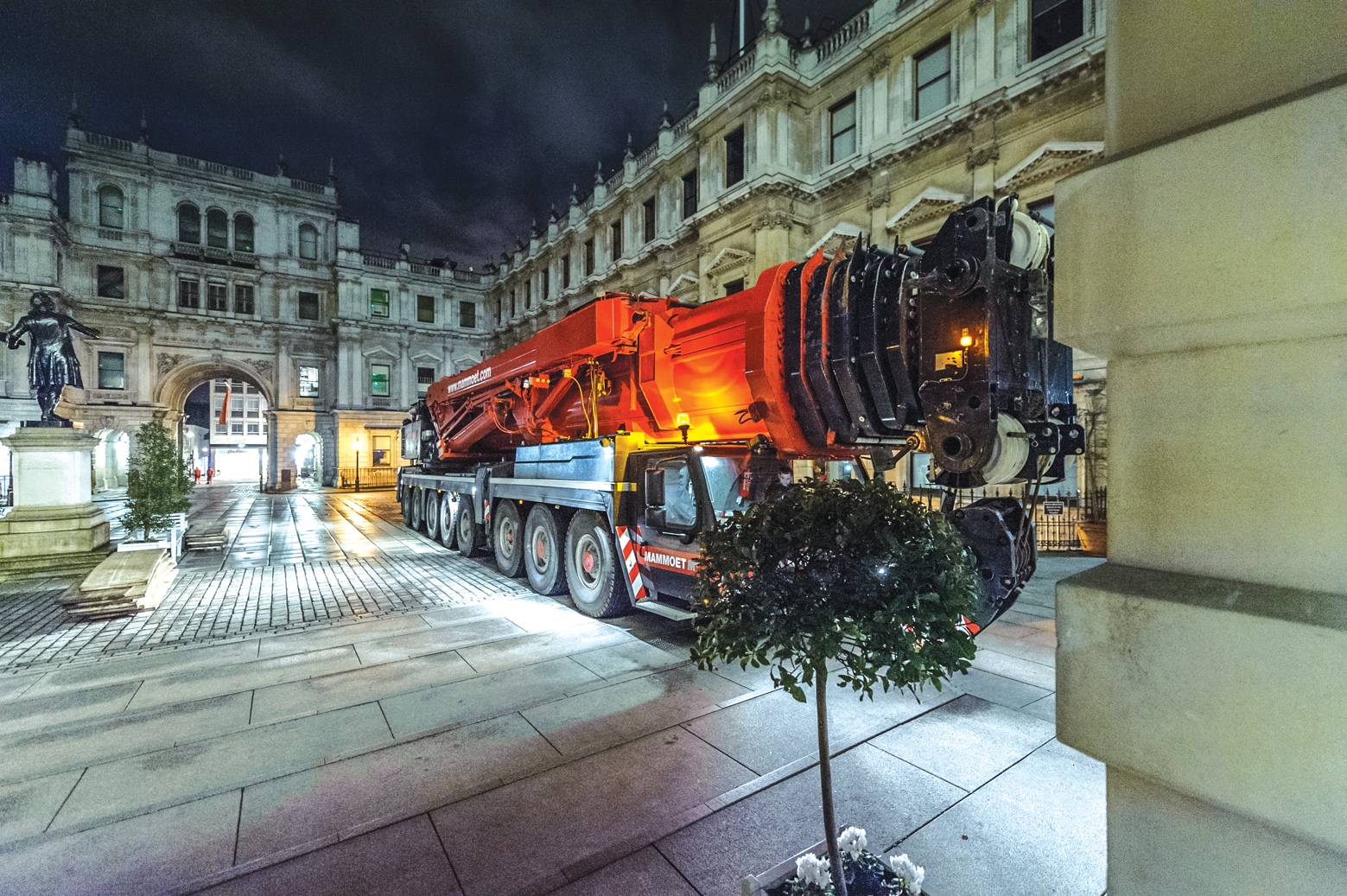 Boiler plant modules had to be craned in during the night

‘We looked to implement a new system that would be more efficient, improve plant life and allow for easy replacement strategies in the future.’

A series of plant pods on the roof has resulted in the DX approach being replaced with chillers and air handling units (AHUs) – with prefabricated sections craned into place at night and between exhibitions of highly prized, indemnified artworks.

The plant upgrade programme has included the first steps in the overhaul of the RA’s heat-generation plant, bringing services together into one, newly designed, central plantroom. ‘We had a collection of old, very large boilers in the basement of Burlington House,’ says Peters. ‘We looked at whether to replace them in situ, or to improve the location at the same time.’

With hot water having to travel large distances from the basement to the new AHUs on the roof, it made sense also to relocate the boiler plant, freeing up the basement for future use. ‘A previous phase of the works had seen a new plantroom on the roof, for the Sackler Wing, library and print room,’ says Peters. ‘We have added the new boiler plant alongside, to complete one very large plantroom, running the whole way across the building.’ 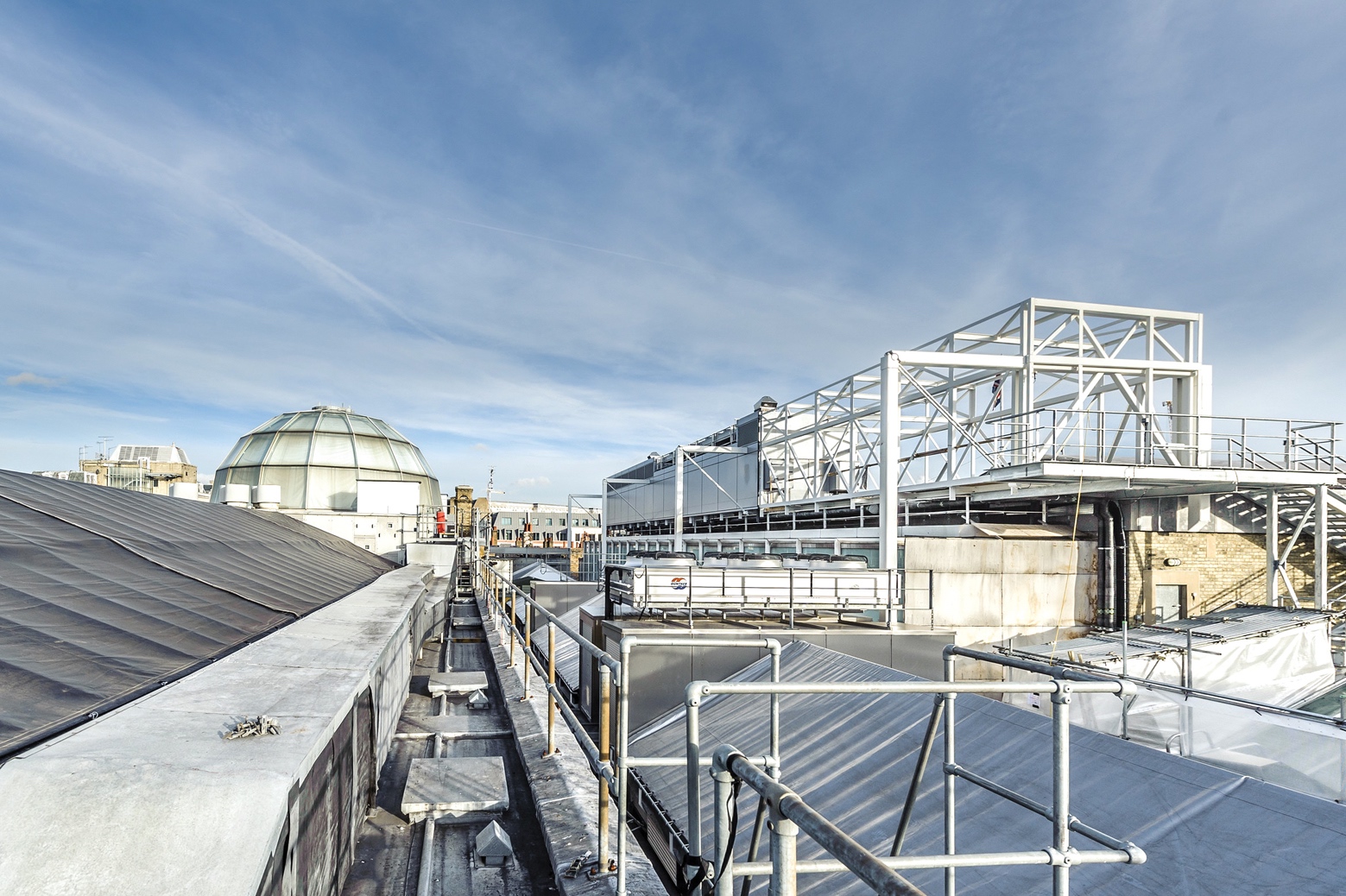 The RA appointed Arup as services designer on the bespoke heating system. ‘The new boiler plantroom consolidates the heating generation across the RA estate,’ says Vasilis Maroulas, associate at Arup. ‘It centralises the maintenance regimes, liberating space for use as back-of-house storage and RA staff offices, and enabling the implementation of critical electrical infrastructure upgrades.’

Arup considered introducing combined heat and power (CHP) plant, but the lack of a sufficient base load meant that poor financial and carbon savings made it unviable. Instead, the consultant specified that the heating load should be met using 16 Remeha Quinta Pro 115 boilers.

These can supply a total heat output of up to 1.8MW to meet peak demand, and can be turned down automatically as low as 17kW at times of low load. The design called for a large DN200-diameter primary boiler loop pipe to connect to the existing distribution system.

The sky’s the limit

The RA’s new rooftop plantroom – above the Sackler Wing of galleries – is a light, compact space, with floor-to-ceiling glazing at either end. Its long, narrow dimensions presented an interesting additional challenge for Arup and contractor CBRE.

‘Given the shape of the Sackler plantroom, the only viable solution was to use modular, wall-mounted boilers,’ says Arup’s senior mechanical engineer Antaeus Wheatley.

Working with Arup and CBRE, Remeha supplied a bespoke, off-site-fabricated rig solution, to meet the requirements of the project and site. To overcome the constraints of the plantroom, the boilers were arranged in an in-line format. 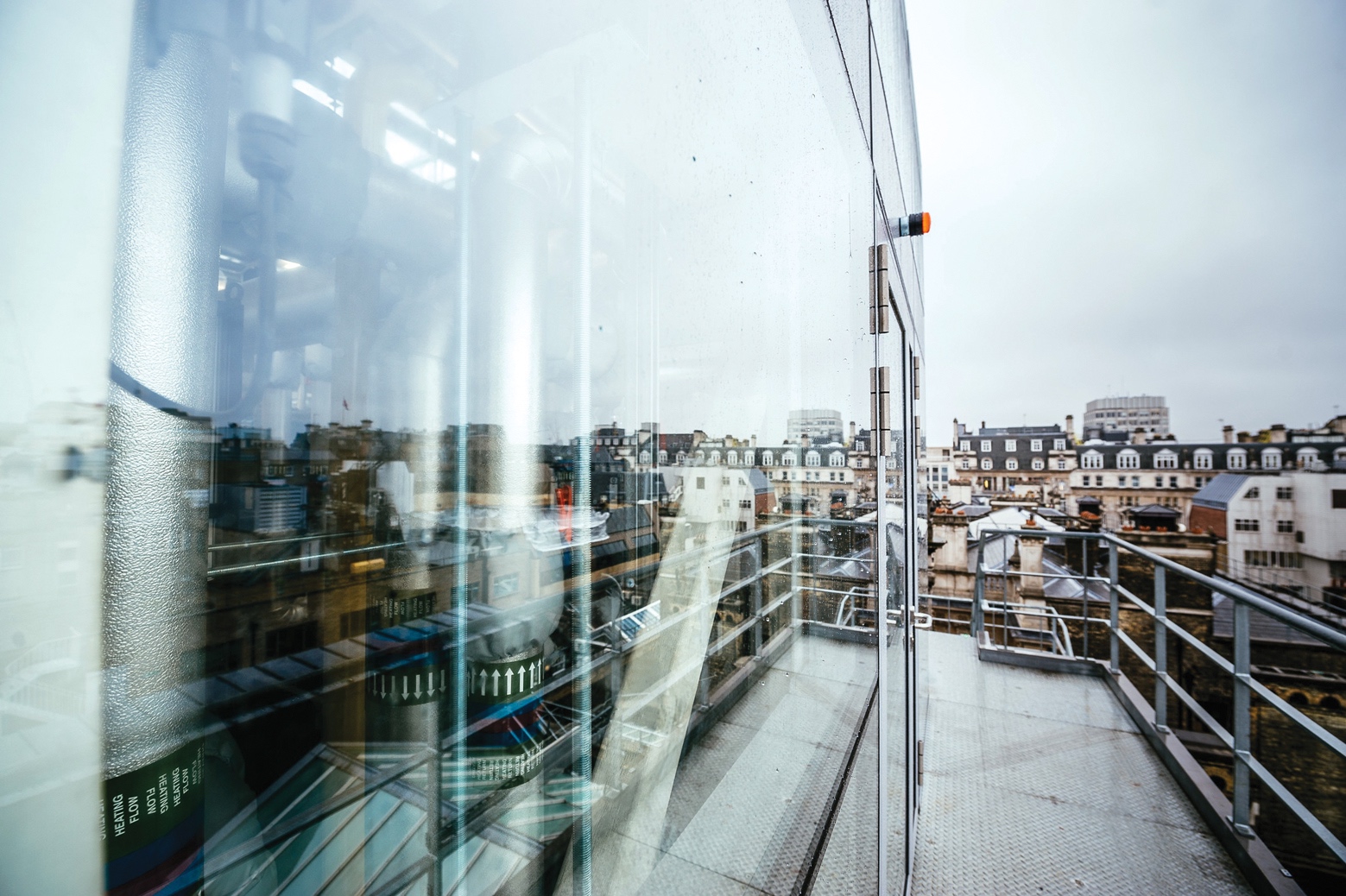 Placing boilers on the rooftop has freed up valuable exhibition space

The rig was specially designed to accommodate the additional orifice plates, test points, expansion vessels and increased shunt-pump sizes specified for each boiler on the frame.

‘The functional design was set down by the consultants,’ says Nick Stevenson, Remeha’s prefabrication expert. ‘Great care was taken to ensure their requirements were met, to minimise potential snagging time, post-installation. The consultants had specific considerations for maximum turndown ratio, interaction with the building management system (BMS) and pipework design, to fit the distribution system for the rest of the building.’ 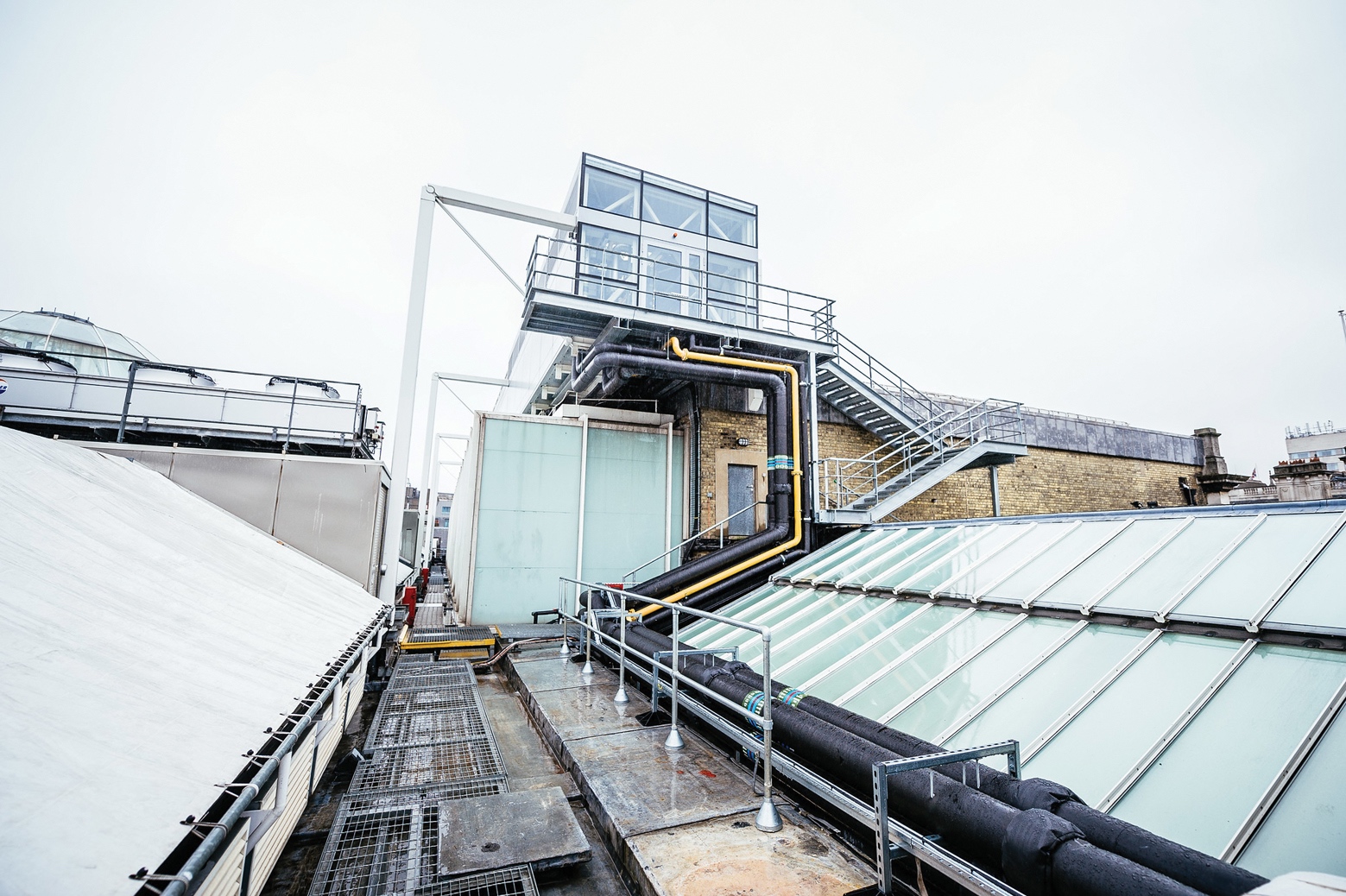 Access was a major concern in the design phase. ‘The roof structure of the plantroom only allowed for a fairly restricted opening without affecting its structural integrity,’ says Stevenson. ‘Fortunately, we were able to design the four modules such that they could be lowered through that opening – just! Each module was crane-lifted from the courtyard into the plantroom structure on the roof.’

Offsite prefabrication offers a number of benefits for client, contractor and consultant. Although it needs design decisions to be made earlier in the project than with site fabrication, the forward planning pays dividends.

‘Physical fit issues are identified and rectified early; more compact designs can often be achieved; production is carried out within a quality-controlled factory environment; end-of-line factory testing offers assurance for function and QA [quality assurance]; site time is reduced dramatically; deliveries are minimised; the need for site skills and personnel are reduced; and hot work on site is decreased,’ says Stevenson.

The RA features some of the world’s most famous artworks and close control of M&E services is needed to protect and conserve its collections. ‘We specify that environmental conditions are controlled to 20±2°C and 50±5% RH [relative humidity], which is the standard for indemnified artworks,’ says Kyle Peters.

Heat from the boilers is delivered to the AHUs to supply air to the galleries via ductwork to high-level grilles. ‘This is the best solution because we need wall and floor space to hang exhibits,’ says Peters.

Heating controls are integrated with the RA’s BMS. Each boiler module incorporates Remeha iSense Pro controls, pre-wired within control panels with safety interlocks and shut-off switches as specified by Arup. The controls wiring was bespoke, to accommodate the additional pump control, monitoring and water-treatment functions. Control panels came with interconnection boxes, to add flexibility for repositioning.

The multiple-boiler, weather-compensating system maximises operational efficiencies. ‘Early analysis of the data shows that the boiler replacement has brought around 10% savings in gas consumption,’ says Antaeus Wheatley. This equates to around 50tCO2/year. ‘This excludes electrical energy savings from replacement of pumping equipment, from which we anticipate a further 10-15% in electrical energy savings once the three-port system is replaced with two-port control. It won’t be possible to appreciate the combined reduction in energy consumption fully until all major works are completed in the next few years.’

‘The major advantage was in terms of time saved on site, and having no hot works taking place on the roof,’ says James Buchan, head of projects at CBRE. ‘We were able to carry on with other parts of the build, while the boilers were fabricated off site.’

Delivery of the boiler plant modules had to be carefully coordinated, with the crane time having to fit around the RA’s opening times, to keep the galleries fully operational during construction. ‘We had to work through the night, craning the modules up between midnight and 8am,’ says Buchan.

The boiler plantroom allows sufficient space for the relocation of existing boilers serving the Burlington Gardens site. All necessary pipework connections are in place, in readiness for this next phase. 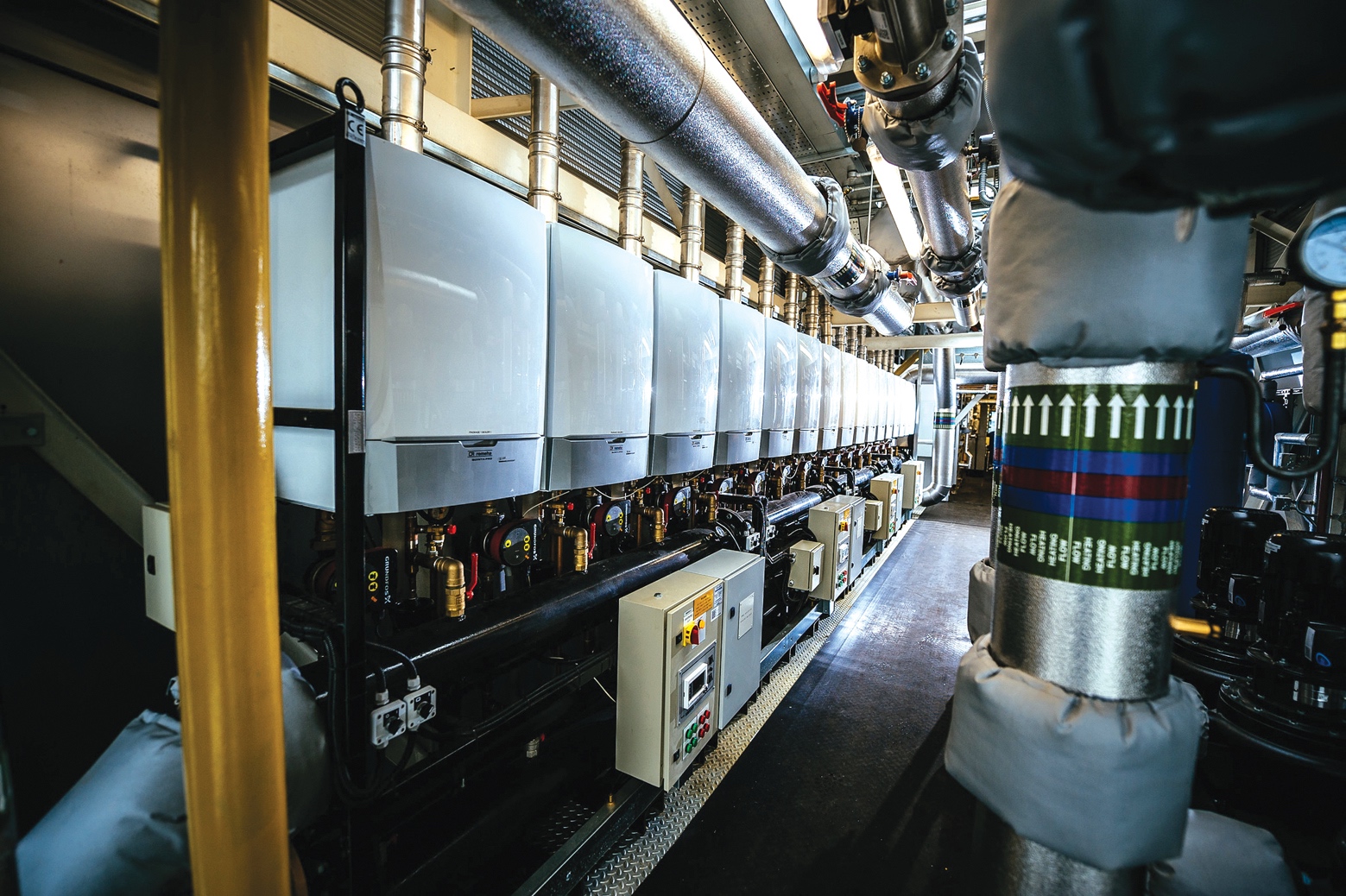 ‘This will save between 50m2 and 100m2 at Burlington Gardens – space that can be put to other uses – which highlights how a successful services infrastructure strategy can have big benefits beyond energy and environmental considerations,’ says Maroulas. Arup is working alongside Chipperfield on the redevelopment of Burlington Gardens.

Few among the crowds on the RA’s courtyard, waiting for the doors to open, will be aware of the massive undertaking. Indeed, the rooftop plantrooms and flues are invisible from Piccadilly. Thanks to the refurbishment, the RA now boasts space heating and hot water provision that is more reliable, more secure, highly efficient and easier to maintain. The design meets the stringent environmental standards required by the galleries at the Academy, achieving consistent temperatures to protect and conserve its priceless works of art.