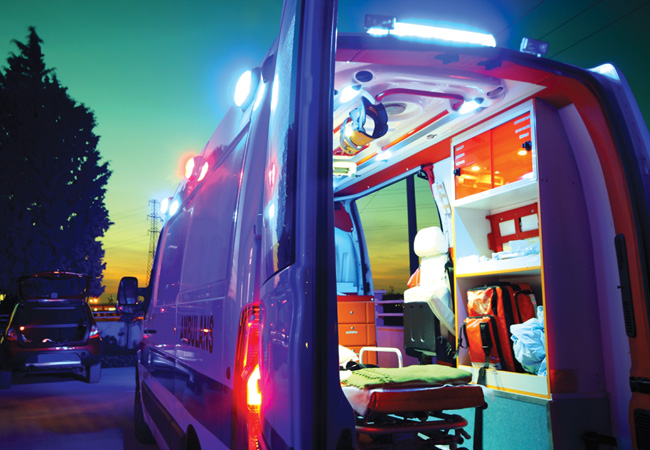 In October 2014, the North West Ambulance Service (NWAS) entered into a 15-year energy performance contract (EnPC) with Imtech via the Carbon and Energy Fund (CEF).

NWAS employs 4,900 staff, serves a population of seven million, and has an estate of 126 sites. This figure includes ambulance stations – largely built in the 1960s or later, and each with a vehicle garage, staff offices and welfare facilities – plus two 1880s, stone-built manor houses that act as headquarters.

Before improvement works were carried out, the cost to supply energy to these buildings was £1.36m. Under the EnPC, various measures – including upgraded lighting, heating and building controls – were implemented across the facilities to ensure a comfortable environment for occupiers and lower energy bills for NWAS. Estates manager Paul Gilfoyle said: ‘The estate had suffered from underinvestment for a number of years and maintaining a comfortable working environment for the staff had become a real challenge. The EnPC was a way to replace old, inefficient equipment that was expensive to operate and maintain.’ 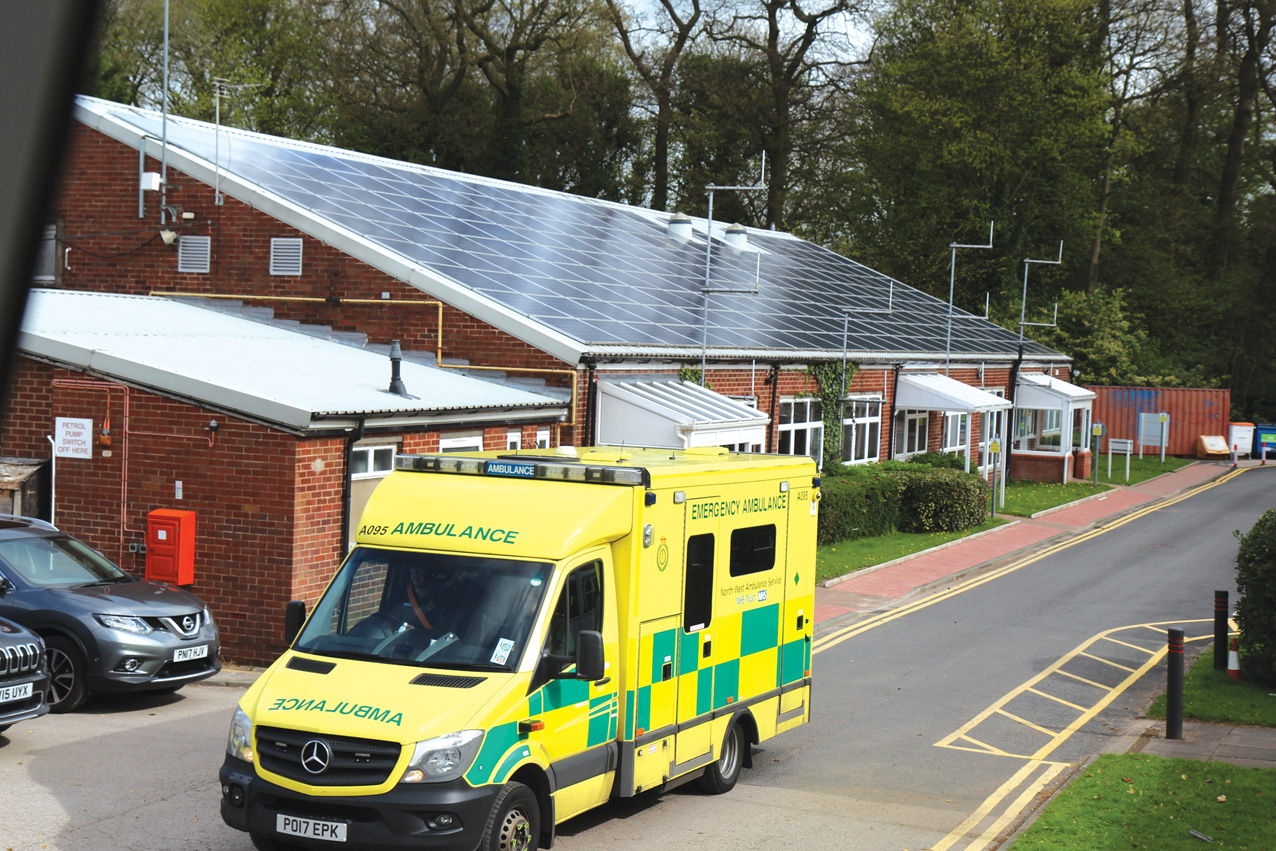 NWAS station after the work was carried out

With EnPCs, organisations don’t need to find upfront capital investment, because the energy contractor guarantees that the improvements will generate sufficient cost savings to repay the finance over the term of the loan. Key to the contracts are clearly defined contractor deliverables, and a collaborative approach. Four years on, the NWAS EnPC can be deemed a success. Guaranteed energy savings have been exceeded by 13% and it is on target to deliver cost savings of more than £4m to frontline patient care by 2029. It has also helped NWAS achieve its carbon-reduction aims.

To understand patterns of energy use, the collection of historic electricity, gas and water consumption data is key. NWAS supplied two years of historic energy invoices (for 2012 and 2013) for each site. These included monthly invoices for the majority of sites, with a smaller number of quarterly invoices. It was decided that 2013 would be the baseline, because this year had the greatest number of actual readings, and there was higher confidence in the estimated readings. The team did an assessment of the historic energy consumption (kWh.m-2.y-1) and compared it with CIBSE benchmarks.

The next step was to select the right energy-saving measures for each site. To establish this, NWAS staff were interviewed to understand how they interacted with each building. A survey of the physical condition of the existing M&E services was also carried out, to assess the effectiveness of the equipment. It became apparent that:

■ Good housekeeping practices – such as closing doors, switching off lights and lowering radiator temperatures – would result in reduced energy consumption.

Imtech also held discussions with NWAS estates on the replacement of obsolete equipment and solutions to maintenance issues. All relevant factors were assessed, to identify the elements that would benefit from upgrade or improvement. This helped to determine a range of measures and technologies for delivering energy savings for each building. By using a mix of technical solutions, the risk of underperformance was minimised, should one not deliver the expected energy savings. 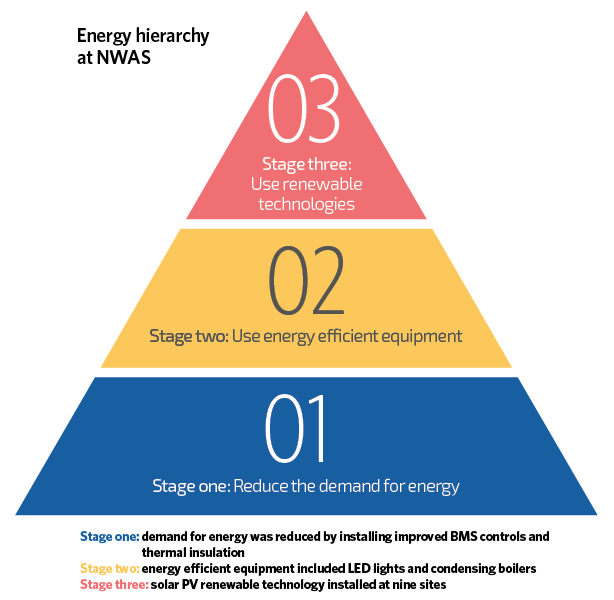 An energy hierarchy was used to guide the process, which had three stages: reduce demand; use energy-efficient equipment, and employ renewable technologies. (See diagram, ‘Energy hierarchy at NWAS’.)

Once potential energy-saving measures were identified, the key factors of commercial viability were considered:

The payback period and cost savings were calculated for each category, and a marginal abatement cost curve (MACC) generated (see Figure 1). This is a useful visualisation of the energy-saving measures (ECMs) available, and a range was then selected that met the criteria for payback and cost savings.

Figure 1: The MACC is ‘a useful visualisation of the energy-savings measures available’

Numerous methods are used to determine the relative benefits of competing energy-savings proposals. The MACC assesses the payback period and cost savings for each ECM, which is a good tool for evaluating the merits of a large number of possible solutions. When the shortlist of likely solutions is produced, an alternative assessment method is used. Net present value (NPV) compares the present value of money today to that of money in the future, taking inflation and returns into account. This enables a financial assessment with greater accuracy of costs, which is important if the project is to be financed externally.

A cornerstone of all EnPCs is regular and unbiased reporting of actual v target performance. An independent measurement and verification (M&V) report ensures accurate, transparent and robust validation of the stated savings. An M&V plan was developed and agreed with NWAS before signing the contract; this quantified the energy savings in kWh and detailed methods of measuring and calculating the guaranteed savings. It is the framework for the quarterly and annual M&V reports. Energy liaison meetings are also held quarterly to discuss performance against targets and invoicing. 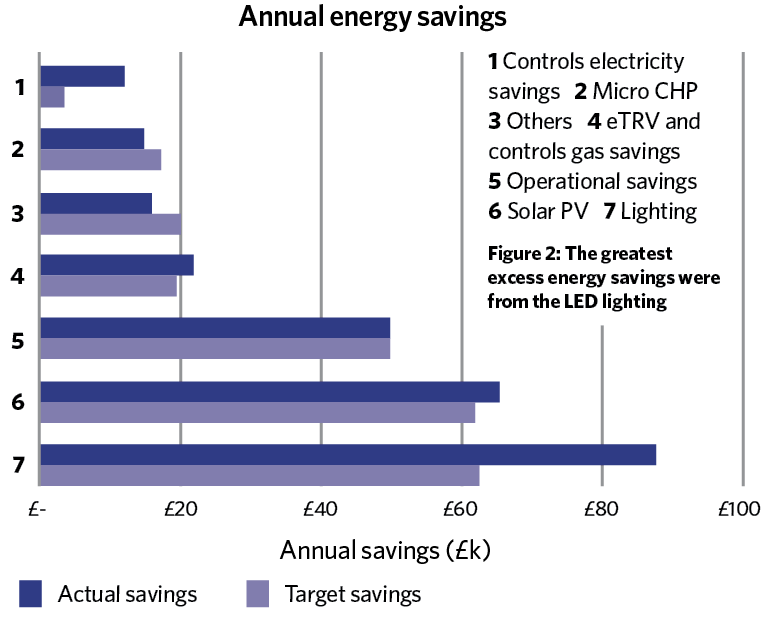 An annual energy-savings chart outlines the variance between targeted and validated actual savings. At NWAS, the level of savings between the first and second years was very similar, and the greatest savings were from LED lighting (see Figure 2). The reports also established that two technologies suffered reliability issues, with micro CHPs suffering breakdowns, and electronic thermostatic radiator valves having to be replaced. (See panel, ‘Reliability issues’.)

The contract exceeded its energy-saving objective by an average of £30,000 in 2016 and 2017, and is on target to deliver on all its guarantees, which include reducing CO2 emissions by 9,300 tonnes and saving more than 25MWh energy by 2029. It will give cost certainty to NWAS for maintenance activities for the remainder of the contract.

Excess financial savings are shared between both parties, offering an incentive to exceed annual targets. This is an essential element of any EnPC and has fostered an innovative, collaborative approach to maintenance and regular monitoring of energy targets.

Crucial to ensuring equipment delivers the targeted savings for the lifetime of the contract is the comprehensive commissioning of all energy-saving measures, a partnering approach with the client, and a robust maintenance regime. ‘Our partnership with Imtech has developed into an open, collaborative relationship,’ said Gilfoyle. ‘The energy and cost savings delivered have exceeded our expectations, and those guaranteed by Imtech and the CEF. This is particularly pleasing as it directly benefits our frontline patient care.’

These wall-hung gas boilers, with an integrated Sterling engine, produce 24kW of heat and 1kW of electricity. Seven were installed. Most suffered mechanical and electrical breakdowns, although there was no common reason for these failures. Standby or supplemental boilers were installed as part of the heating-system upgrade, so heating was maintained to the building during breakdowns. By working with the manufacturers to resolve the issues, the reliability of the micro CHPs improved significantly and the best electrical-generation performance since commissioning has been achieved in the past 12 months.

The electronic thermostatic radiator valves (eTRVs) consist of a motorised valve and replaced existing TRVs for each radiator. There is also a room controller and small detectors to monitor windows opening. Each component is battery operated and communicates wirelessly, so no external wiring is required. Multiple time and temperature schedules have been programmed into each controller, to match occupancy patterns.

The eTRV system controls room temperatures and responds to opening windows as programmed, and a reduction in gas consumption was observed at the majority of sites. However, the battery life was shorter than expected and the equipment was not sufficiently robust for the environment, with numerous eTRVs being dislodged.

When it became apparent, 18 months ago, that a long-term solution was not available, the eTRVs were replaced with traditional TRVs. The decision was taken with NWAS and was funded from savings made under the contract.