Pentavia Mill Hill is a pioneering development. The mixed-use scheme of 844 new homes on a brownfield site in Barnet, north London, is set to be one of the first developments to comply with London’s tough new environmental rules after being granted planning permission. The development’s heating and hot-water system is predicted to save up to 62% carbon emissions compared with the 2013 Building Regulations’ notional building emission rate.

For the scheme’s MEP engineers, ChapmanBDSP, the journey to planning approval has been far from straightforward, however.

Its involvement with Pentavia Mill Hill started in 2016, when it set out to devise a Building Regulation-compliant MEP design for developer Meadow Residential. It designed a fairly conventional heating solution based on a gas-fired combined heat and power (CHP) engine, which would generate electricity while providing heat to help meet the dwellings’ heat and hot-water demand. ‘Gas CHP was a good fit with the size of the development and its uses; at the time, it was the easiest way to achieve the carbon reduction target [to enable compliance with the London Plan],’ says Joanna Conceicao, an associate at ChapmanBDSP.

In 2018, planning permission for the development was refused by the local council. However, the scale and strategic importance of the scheme in providing affordable homes meant that it had to be referred to London’s mayor. The mayor supported the scheme in principle, subject to various design amendments to bring it into line with the London Plan. The scheme was subsequently changed, resubmitted and eventually approved by the mayor.

Architect Arney Fender Katsalidis’s design comprises 18 housing blocks, ranging in height from four to 16 storeys, with some of the apartments built above retail outlets. The scheme’s massing has the 16-storey block at the east of the site, with a 12-storey one marking the west of the scheme. The buildings frame the southern boundary of the site, with the other 10- to 13-storey blocks interspersed across the scheme to give what the planners describe as ‘undulating massing’.

It was during the delay in obtaining planning permission that the Greater London Authority (GLA) introduced new carbon-factor rules under its January 2019 revisions to the London Plan. These include the adoption of Standard Assessment Procedure (SAP) 10, which uses more up-to-date carbon factors for Grid electricity to take into account decarbonisation of the Grid because of the growth in renewable energy sources. Under SAP 10, carbon-emission factors reduce from 0.519 kgCO2/kWh to 0.233 kgCO2/kWh. 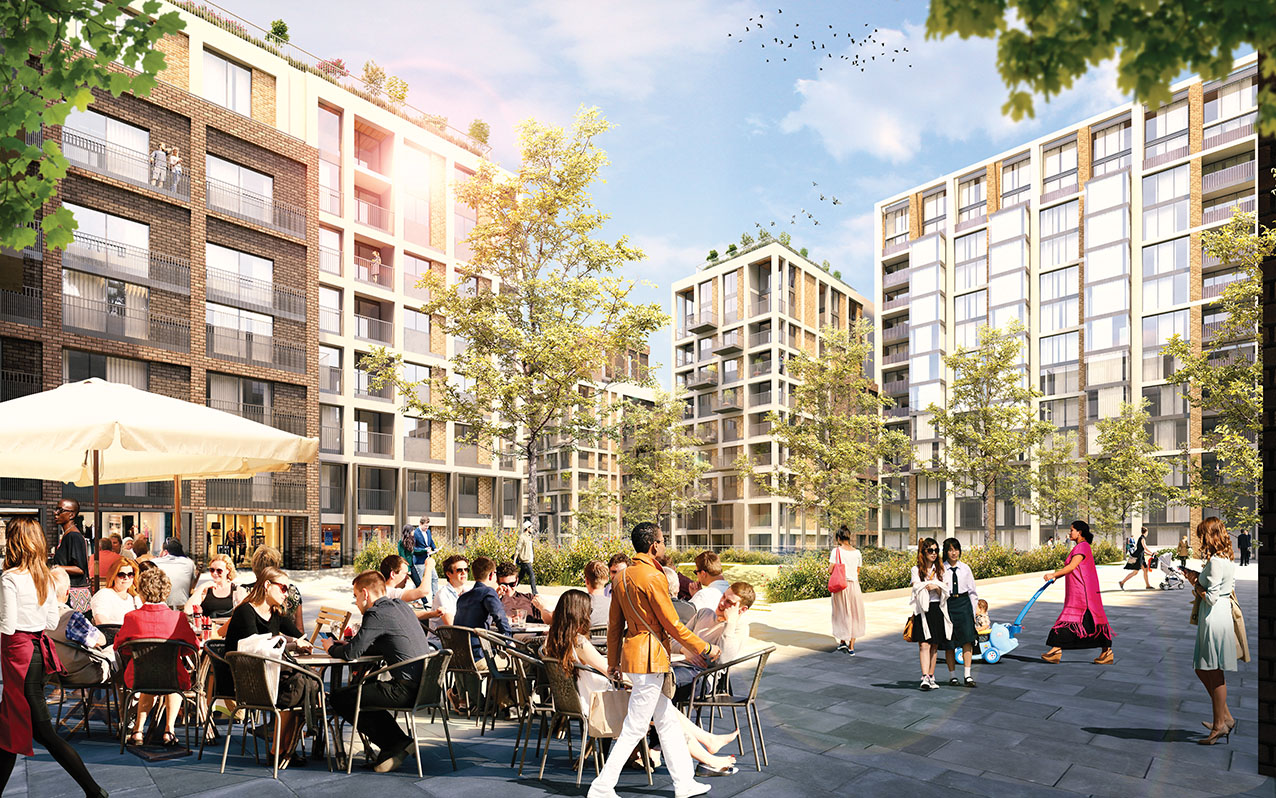 When ChapmanBDSP first developed the design for its gas-CHP heating system, SAP 2012 was current – but now GLA wanted it to demonstrate compliance with the London Plan using SAP 10.

The carbon factor of Grid electricity is significant because it is used in SAP calculations, which are required to demonstrate compliance with Part L of the Building Regulations for new dwellings. SAP is calculated using an approved computer program. Two emission-rate figures are calculated: the dwelling emission rate (DER) and the target emission rate (TER).

The DER is calculated based on the proposed design of a dwelling. This is compared with the TER, which is the minimum acceptable energy performance of a notional dwelling of similar size and shape to the one proposed. ‘To comply [with the London Plan] the DER must achieve at least 35% improvement over the TER,’ explains Conceicao.

As the carbon associated with electricity is now a lot less, using a gas CHP (where the electricity generated is used to offset the emissions from gas consumed) gives you significantly less carbon savings.

‘We were achieving a 43% carbon reduction using SAP 2012, whereas under SAP 10, we were only achieving a 4% reduction,’ Conceicao explains. ‘That was when we realised we could not justify using the CHP any longer, so we had to change our energy strategy completely.’

To find the optimum energy strategy to comply with the new rules, ChapmanBDSP looked at seven potential solutions for supplying space heating and hot water to the dwellings, including:

All solutions tested also included PV panels on the roof of each block in an attempt to maximise carbon-emissions reductions. The designers are awaiting the go-ahead before developing the detailed design, so a final decision on the energy strategy has still to be made. However, Conceicao says the final scheme is likely to be one of two ASHP options: a centralised ambient loop ASHP with individual AWHPs in each flat; or a centralised ASHP with individual electric immersion heaters.

The tallest block on the site is 16 storeys high

Conceicao says the initial option ‘delivers a slightly lower carbon solution’, while the immersion option uses conventional technology and ‘would have a lower capital cost’. In terms of a carbon reduction, the initial proposal is calculated to deliver a 62% reduction in carbon emissions compared with the TER from the 2013 Building Regulations, while the electric immersion heater option would deliver a 53% reduction.

As a consequence of its work on Pentavia Mill Hill, ChapmanBDSP  has developed a suitability matrix for heating solutions. ‘At the moment, we are having to educate our clients about why CHP can no longer be used as the default solution,’ says Conceicao. ‘Demonstrating with actual numbers makes it very obvious to them why they cannot have gas-fired CHP anymore.’

ChapmanBDSP is using the matrix for large-scale projects that are referable to the GLA. However, Conceicao says the matrix ‘will be applicable nationally if the proposed changes to Part L are adopted, which include new carbon factors for Grid electricity’.

The consultation to uplift the standards of Part L of the Building Regulations is set to close at 11.45pm on 7 February 2020.

The proposed changes to Part L include: