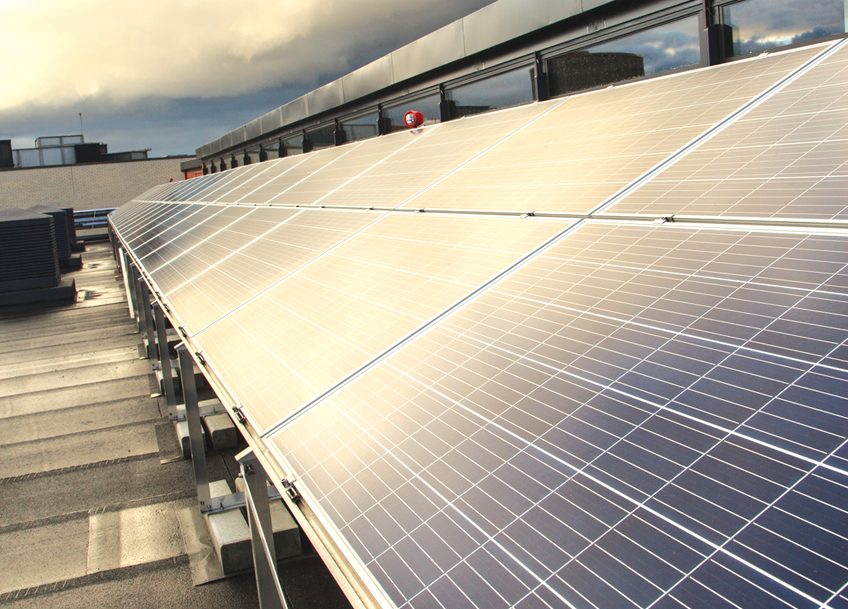 Heat networks will be a key feature of the UK’s future energy strategy, with around 20% of heat forecast to be delivered via such networks, many of which are likely to use heat pump technology as the lead heat source.

To further reduce the operational carbon emissions of these systems and mitigate the additional burden that the electrification of heat will place on the electrical Grid infrastructure, rooftop photovoltaic (PV) and solar thermal arrays have been proposed as potential supplemental technologies.

This article investigates the technical feasibility and economic benefits of replacing or supplementing heat pump load with solar thermal or PV.

As this study is based on urban heat networks in London, where roof-space availability is limited, it was unclear which technology would provide the best carbon reductions and if they offer feasible business cases for use on new and existing developments.

In London, the capital costs of a communal heating system are heavily influenced by the carbon offsetting cost required by the Greater London Authority (GLA), currently priced at £95 per tonne of CO2 over a 30-year lifetime. Reducing operational carbon emissions can, therefore, reduce capital cost significantly.

An hourly demand model was created, based on a standard, fourth-generation, 2-pipe, low temperature heat network that supplies heating and hot water to end users via heat interface units (HIUs).

The base case is a heat network with a 55°C flow temperature where air source heat pumps (ASHPs), in combination with a thermal store, are sized to contribute 80% of the annual heat demand (annual heat fraction). This is typical for meeting the GLA minimum decarbonisation requirements. The remaining 20% annual heat demand is provided by peaking gas boilers.

The load profile used within the hourly load model was based on heat demands for domestic hot water (DHW) and space heating taken from live operational data of 337 occupied dwellings across 2019 and 2020.

Data analysis showed a major change in usage pattern between the years. An example of the difference between the weekday DHW demand profile between 2019 and 2020 is shown in Figure 2.

The most notable difference between the datasets is the reduction in the morning weekday peak DHW demand, which is 56% lower in 2020. The large reduction is probably because of the Covid-19 pandemic resulting in more flexible working. 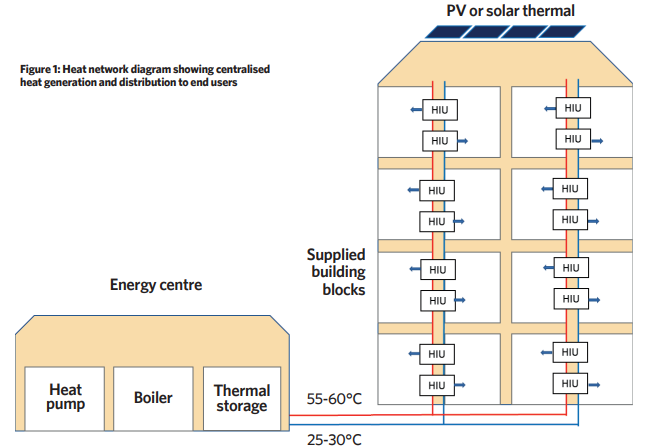 Despite the difference in profiles, the conclusions of the assessment were not affected by the profile used. The 2019 profiles were used as the basis of the analysis.

The annual operation of ASHP, boiler, PV and solar thermal generation were modelled using manufacturer data and the CIBSE Test Reference Year weather dataset for London. The model prioritised the use of solar thermal over the ASHP, with the gas boiler used as peaking plant when the solar thermal, ASHP and thermal storage couldn’t meet peak load.

PV electricity generation was directed to supply the ASHP, with surplus exported to the Grid at an export tariff of 5p/kWh.

Monthly carbon-emission factors for gas and electricity were used to calculate the annual carbon emissions for each scheme. Linear cost factors were used to estimate capital and operational costs for the varying sizes of each technology.

Five schemes in London were analysed, ranging in size from 100 to 1,000 dwellings. The required plant sizing and available roof space was representative of the existing schemes.

As the conclusions were similar across all scheme sizes, results from the 350-dwelling scheme are used to illustrate the findings of the full research paper.

On schemes of 100-1,000 dwellings, the use of PV is preferable in terms of capital cost, delivered cost of heat and total system cost

Addition of solar thermal or PV to the base case

The impact on costs and carbon emissions of using the rooftop area for a solar thermal or PV array was investigated.

A solar thermal array mostly offsets heat that would otherwise be provided by the ASHP during months when the Grid carbon intensity is typically low. Figure 3 (page 42) shows that the array causes a maximum 1.7% reduction in gas boiler annual heat fraction. This has a slight reduction in electricity and gas consumption and a minimal reduction in annual operating expenditure (opex). Throughout all scheme sizes, the use of solar thermal always caused an increase in total system cost.

In comparison with the solar thermal, the PV offsets annual electrical demand rather than onsite heat generation. Given the high cost of Grid electricity, reducing electricity usage – and therefore opex costs – had a greater impact on reducing total system cost. Accordingly, the total system cost was always lower for a system with a PV array than with a solar thermal array.

Both PV and solar thermal arrays provided an equivalent reduction in carbon emissions at approximately 6% from the base case.

Increasing ASHP size from the base case

The impact of ASHP sizing and gas boiler capacity were investigated in relation to the base case, which assumes no solar thermal or PV is used.

An increase in the annual ASHP heat fraction, from 80% to 90%, resulted in a 19% reduction in carbon emissions – greater than the reductions provided by all PV or solar thermal options assessed.

Increasing the annual ASHP heat fraction increased the ASHP cost. However, this was offset by the reduction in carbon emissions and, hence, GLA carbon offset payments.

There is, however, a 0.3p/kWh increase in delivered cost of heat because of increased electrical use at 95% heat fraction.

On schemes of 100-1,000 dwellings, the use of PV is preferable to solar thermal in terms of capital cost, delivered cost of heat and total system cost. The reduction in operational carbon emissions was similar between both technologies.

Total system cost was found to reduce with increased PV size, so long as onsite electricity use is kept above around 40%. This study calculated PV array utilisations to be > 80% on all scheme sizes investigated because of limited available roof space.

Increasing heat pump size from a base case 80% annual heat fraction always resulted in lower carbon emissions than installing the maximum available array sizes of PV or solar thermal. However, this marginally increases the total system cost and delivered cost of heat. 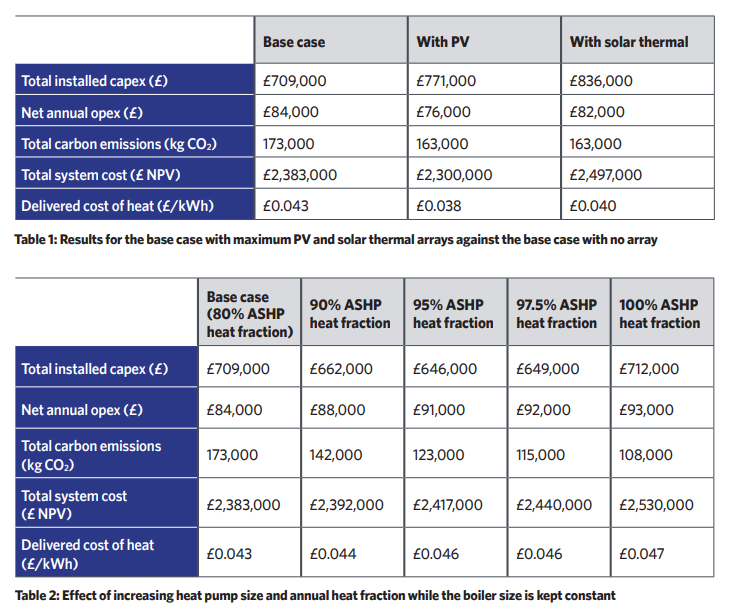 The optimum ASHP heat fraction to minimise capex was found to be around 95% because of the carbon emissions reductions and subsequent GLA carbon offsetting costs reductions.

Where heat pumps are the central generation technology in a hybrid system, optimising the ASHP heat fraction should be considered before investigating the use of solar thermal or PV. Targeting an ASHP heat fraction of 95% provides the best opportunity to reduce carbon emissions without increasing capital costs.

After optimisation of the ASHP/thermal store provision, PV is preferred over solar thermal to counterbalance both the electricity and lifetime costs of the larger ASHP.

This article provides a high-level summary of the research findings. Visit
www.fairheat.com to view the full presentation and download the research paper

About the author
Mark Reynolds is a consulting engineer at FairHeat 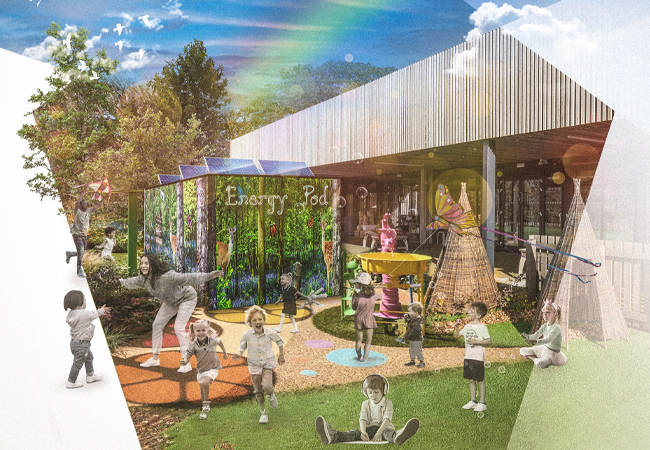 Bundles of energy: the platform approach to decarbonising schools 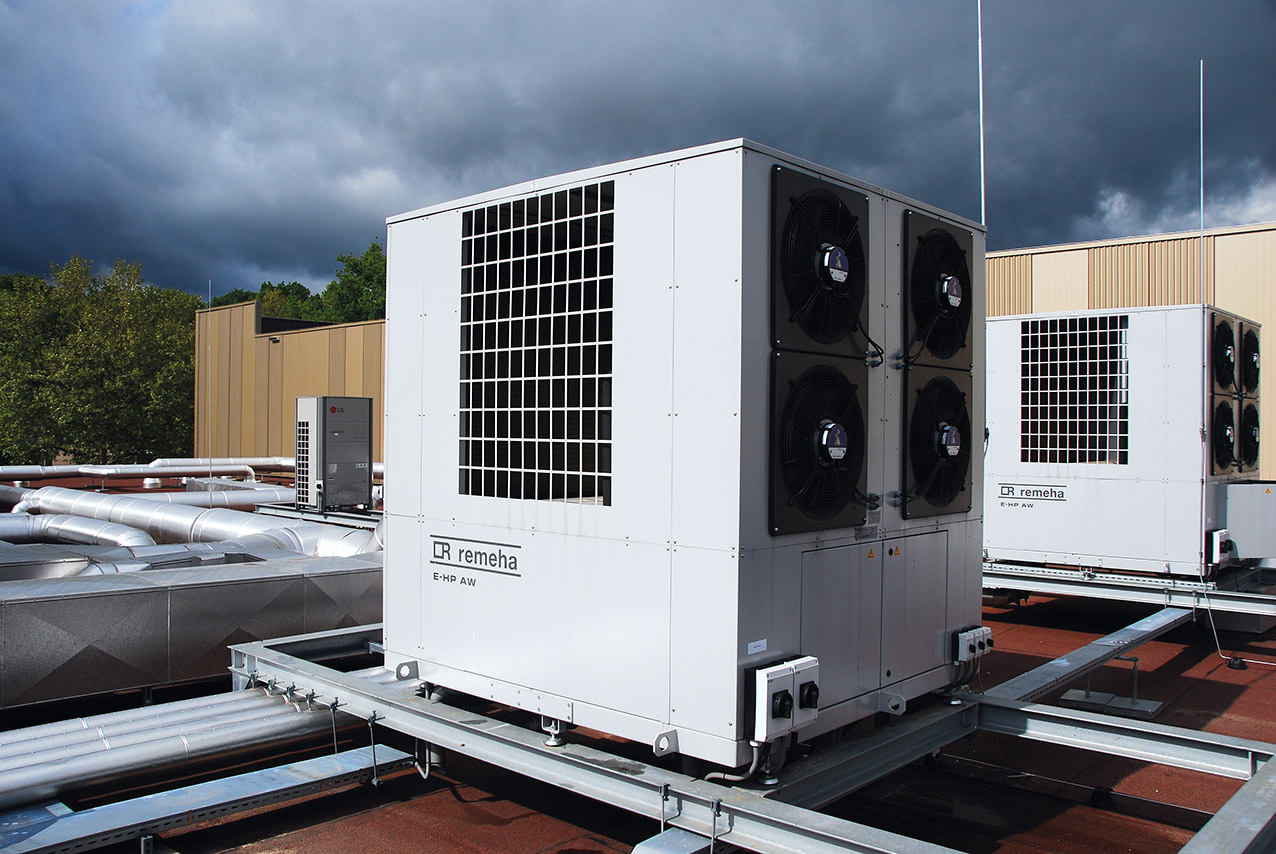 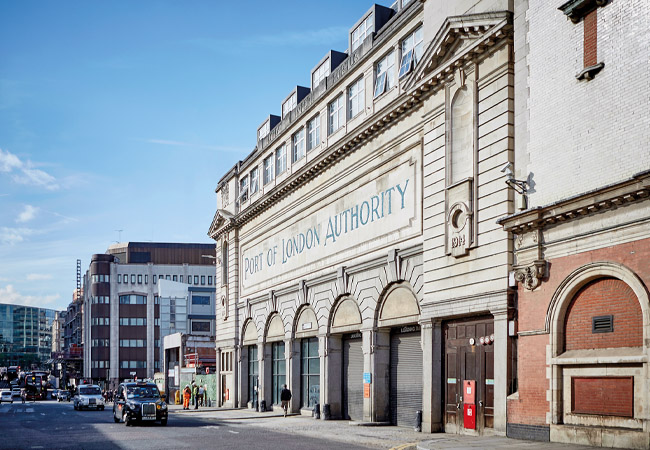 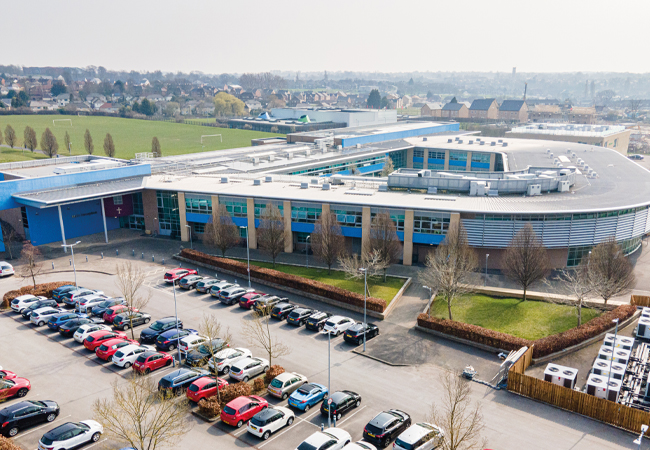 The dash from gas: converting schools from gas to heat pumps