TfL moved into the visually striking Palestra office building in 2007

Palestra is an unusual building. The top three floors of this visually striking office block in Southwark, London, form a box that cantilevers out over the raking, glazed façades that enclose the nine lower floors. These, in turn, are held aloft by a series of angled columns above the building’s entrance. Palestra was designed as a speculative 37,400m2 office building by architect Will Alsop. It opened in 2006, rated Breeam Very Good.

The scheme’s building services are as unusual as its architecture. In 2007, the London Development Agency (LDA) and London Climate Change Agency (LCCA) occupied two floors, and installed a 63kWp photovoltaic array on the roof, along with 14 micro-wind turbines, rated at 1kW each.

Even at its minimum setting of 417kW, using the CCHP was emitting more carbon than if the building was simply hooked up to the grid

Soon afterwards, Transport for London (TfL), which is responsible for the day-to-day operation of the capital’s public transport network, took the lease for the remaining 10 floors, to house 2,500 of its staff. TfL’s subsequent fit-out resulted in the two organisations trying to turn Palestra into a showcase of sustainability: the LCCA and wider Greater London Authority (GLA), which the LDA was part of, supported the addition of the UK’s first building-integrated hydrogen fuel cell, a combined cooling, heat and power (CCHP) system, a rainwater harvesting system for toilet flushing, and energy efficient T5 lighting with head-end dimming control on the office floors. As a result, the Breeam rating rose to Excellent.

The state-of-the-art building services systems should have made Palestra a flagship of sustainability, but its 2010 Display Energy Certificate (DEC) told a different story. It showed the building was using so much energy that it had a score of 182, giving it a DEC G rating – the worst operational category. In 2013, when the LDA moved out and TfL took over the building, it set about trying to improve its woeful performance. 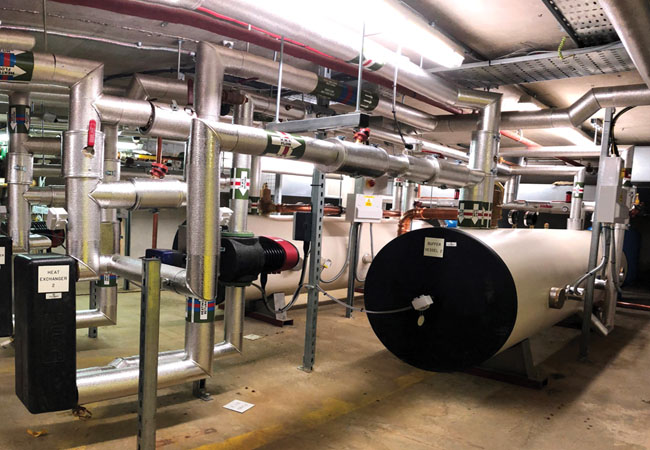 ‘There were issues with plant and metering from the outset,’ says Quinten Babcock, environment manager, TfL.

The micro-wind turbines had already been removed from the roof under a product recall; two had been replaced before the LDA moved out, but TfL decided not to replace the remaining 12. It was when TfL started to investigate the gas CCHP, however, that the real energy use issues started to emerge.

In 2010, TfL found that the CCHP was running continuously at full output, generating 834kW of electrical output, but it was twinned with one of the building’s four incoming transformers with a peak demand of 630kW in mid-summer. ‘Most of the time, it was exporting large amounts of its power for minimal recompense,’ explains Babcock. 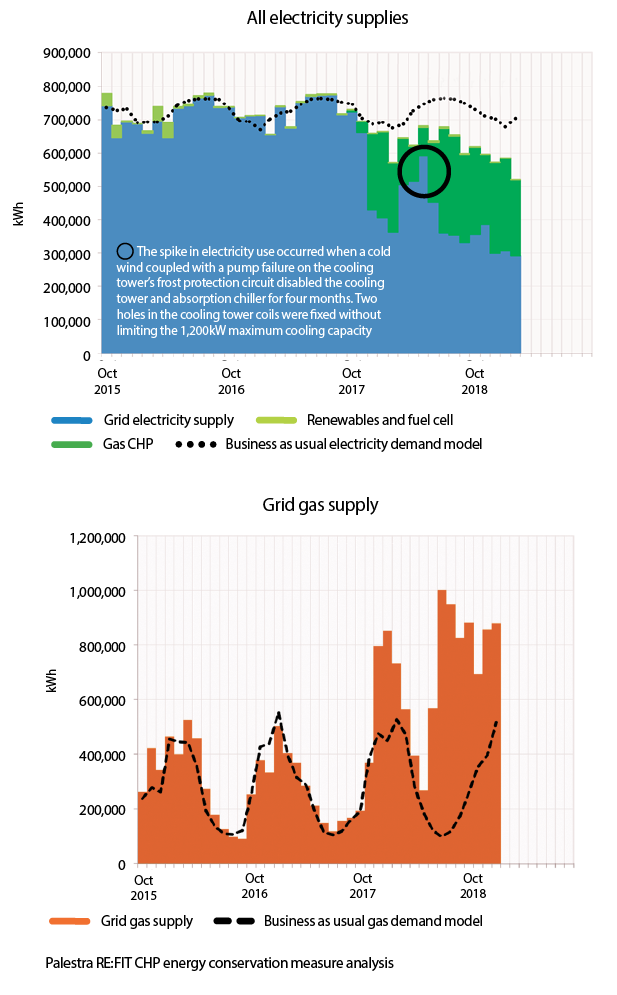 To try to save energy, TfL reduced the CCHP’s electrical output to its minimum setting of 417kW, and ran it between 08.00 and 18.00 hours, Monday to Friday. In 2012, TfL commissioned Verco to investigate why the gas-fired CCHP system was not operating efficiently. It found that the building management system (BMS) had not been integrated effectively with the onsite metering to allow the CHP’s electrical output to modulate. ‘We had all the kit to enable us to modulate the CCHP, but the BMS was not set up to do it,’ says Babcock.

‘Even at its minimum setting, Verco said: ‘You’re emitting more carbon using the CCHP than if the building was simply hooked up to the grid.’ So we turned off the gas CCHP while we set about developing a solution,’ says Babcock.

In 2015, TfL appointed E.ON on a design and build energy performance contract to develop and install solutions to the building’s woes. The appointment was made under the GLA’s RE:FIT initiative to make the capital’s buildings more energy efficient. Babcock describes it as ‘design and build on steroids’ because it requires contractors to design, build, measure and verify energy efficiency measures.

E.ON’s energy solutions team worked closely with TfL to understand the issues it had with the building’s services. It brought in specialist partners to help develop and deliver solutions that could be retrofitted while enabling TfL to maintain its 24/7 operations. These specialists included: Ramboll, to analyse operation of the CCHP and propose solutions; Megan Mechanical Services, to install complex pipework modifications while the building remained in operation; and A&O Engineering Design, to commission the revamped systems. 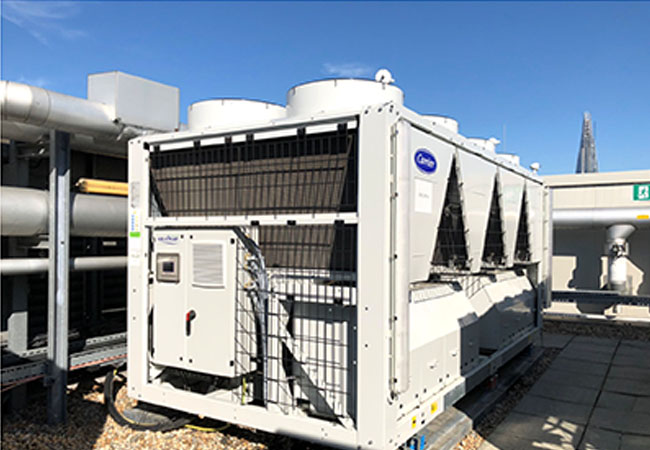 ‘The selection of the team responsible for delivery of the solution was critical to its success, but what was equally important was that the delivery team worked with the design team to ensure the solution could be effectively implemented and then operated,’ says Babcock.

Under RE:FIT, the contractor guaranteed that its interventions would deliver cost savings of at least £111,000 a year on TfL’s energy bill and an 8% reduction in the building’s CO2 emissions. 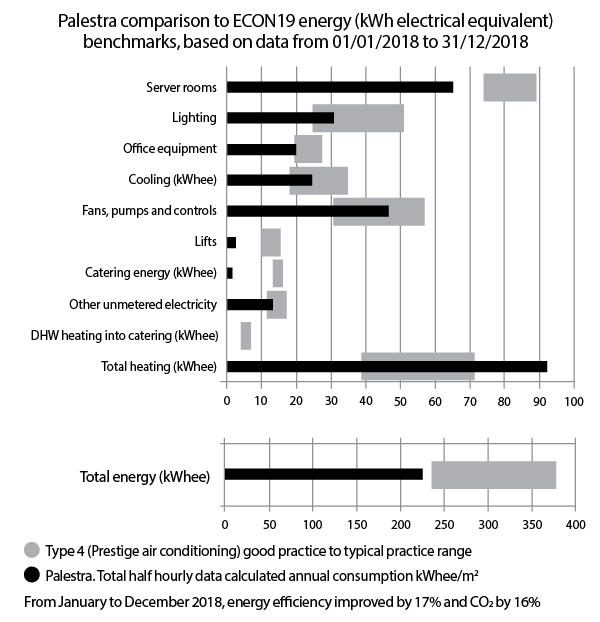 At times of low hot water demand, heat from the CCHP is diverted to a separate 75,000-litre thermal store. This ensures sufficient hot water is available during the night, without needing to fire-up a boiler, when the CCHP is not running. ‘The thermal store gives us enough LTHW to supply domestic hot water and even some cooling from the absorption chiller for a whole day,’ says Babcock.

To enable the CCHP engines to run for as long as possible, the 160kW per floor electrical loads from the two 24/7 operational floors were connected to a transformer twinned with the CCHP. The absorption chiller was also recommissioned (along with its associated cooling tower) to increase heat demand further from the CHP – an intervention that helped reduce electrical demand from the six conventional chillers, further improving the system’s overall carbon footprint. A new electric modulating chiller was also installed to deal efficiently with small cooling load increases.

E.ON also altered the CCHP LTHW pipework so that high-grade, reclaimed heat from the gas engine could be better used to meet heat demand from the building’s air handling units and the fan coil units (FCUs) on the office floors, and to supply the new DHW plate heat exchangers. The energy management system was also linked to the BMS to keep electrical demand above the CCHP’s minimum 417kW output for as long as possible, while avoiding the need to export electricity when it is not cost-effective to do so. ‘The CCHP system now operates as it should,’ says Babcock. 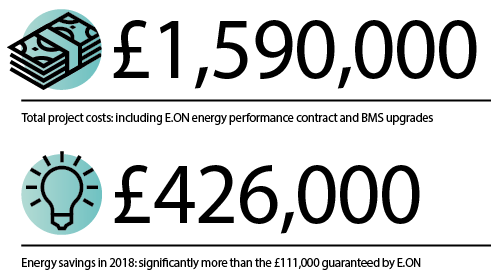 In addition, E.ON replaced all 34 of the base-build BMS controllers that had become obsolete, along with communication network and software systems, to create a more comprehensive and robust control system that would allow the building management and FM teams to better manage the mechanical systems to improve occupant comfort.

The BMS provides automated alarms to E.ON’s measurement and verification team and TfL’s facilities helpdesk to ensure faults are converted to work tasks for the maintenance team, with the corrected fault verified by E.ON. 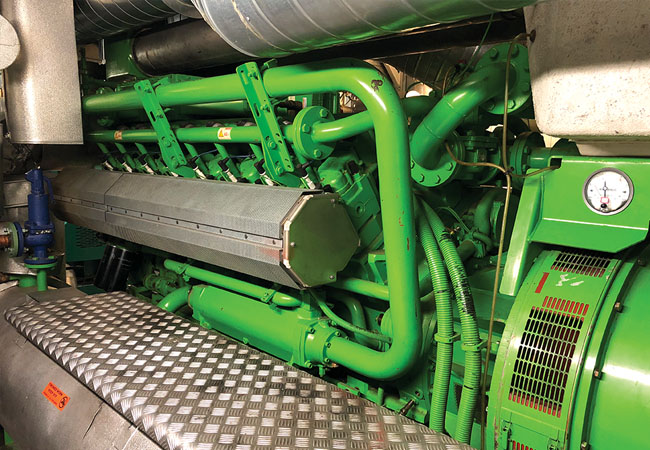 Finally, the FCUs on the two office floors that had the highest number of complaints were recommissioned. These floors have perimeter FCUs that provide heating and cooling, while FCUs close to the core are cooling only. TfL found the FCUs were simultaneously heating and cooling. This was discovered when it turned off the LTHW circuit to reconfigure the pipework one weekend; almost immediately one of the 500kW chillers turned off as the cooling load dropped suddenly.

‘All we had was a return air sensor, so we had no idea what the units were actually doing,’ says Babcock. As part of the recommissioning exercise, a supply air sensor was added to each FCU to ensure the supply air temperature remained within limits for both heating and cooling. E.ON also increased the deadband between heating and cooling. ‘This exercise will be repeated on the remaining floors when funds become available,’ Babcock says. 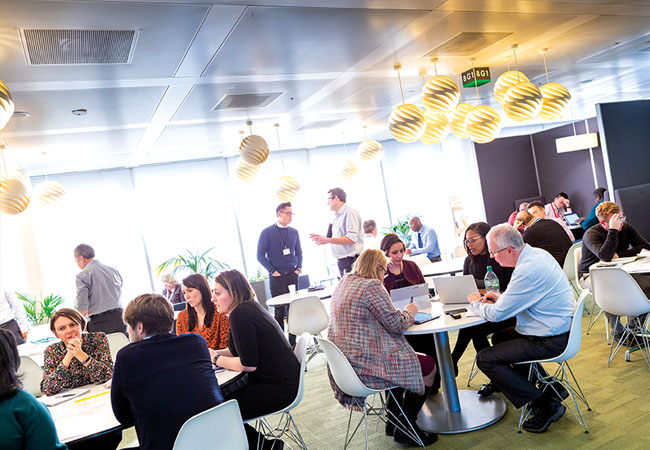 A break out space at Palestra

‘Since the improvements to our energy management system, we’ve seen significant savings in terms of energy costs and carbon emissions,’ says Babcock. ‘In December 2018 alone we were seeing an average of £1,604 a day in energy savings compared with what it would have cost us without the CCHP.’

Babcock and his team are continuing to make further improvements: ‘In the last week of February 2019, we were able to turn off another one of the four incoming transformers and feed that supply with CHP power. This led to the CHP providing 59% of total building power requirements and a 43% reduction in electric chiller use as the consequential CHP waste heat was powering the absorption chiller at full output for large portions of the week with no electric chillers in use at all,’ he says proudly.

Babcock’s work is not yet done. He has plans to replace the uninterruptible power supply (UPS) with a new modular, self-managing UPS. This will enable TfL to take the 320kW of 24/7 operational floors off the electricity grid at peak times and allow the CHP to ramp up fully to 834kW output, injecting the maximum possible load into the grid for demand response payments to TfL in the order of 30p/kWh. As a result, TfL will be able to access demand response income streams.

One problem was a lack of domestic hot water. In addition to running London’s underground and bus services, TfL is responsible for promoting cycling in the capital. Consequently, it has a high number of staff that cycle to work, most of whom arrive at the office at roughly the same time. However, Verco found the building’s two 700-litre domestic hot water calorifiers were taking two hours to recharge, which meant there was insufficient hot water for the cyclists’ showers and for the cafeteria breakfast rush. This led to the E.ON-delivered ‘endless’ DHW system.

Water use has also gone down: rainwater is harvested and used to flush toilets and urinals. Waterless urinals have been installed, reducing total water use by 15%, to 5m3 per person per year. The toilets have been converted from 6/4-litre dual-flush units to 4.5-litre single-flush Wras-approved models, which is expected to avoid 2,500 blockages a year and reduce water use to 4m3 per person per year. 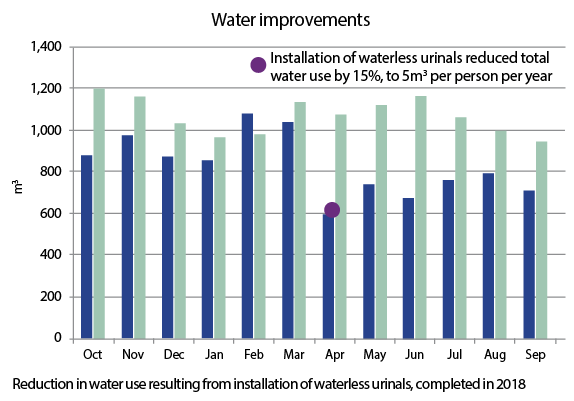 The intention is to reduce Palestra’s energy use at peak times, and to absorb power from the grid during periods of excess capacity – for example, at night, when loads are lower. When the wind isn’t blowing, however, it will be able to generate electricity and supply excess power from Palestra to the grid when it is commercially viable.

Significantly, E.ON’s contract did not involve trying to get the 200kW fuel cell to work. When it was installed, it was linked to transformer T1, which supplied the light
and power circuits to half of each of the office floors.

This model of fuel cell is no longer manufactured, so TfL has bought an identical (unused) one from a site in the UK for spares. Babcock says TfL has plans to recommission the fuel cell and to couple it to second-life electric vehicle batteries (taken from its buses) to enhance its demand-response capabilities. 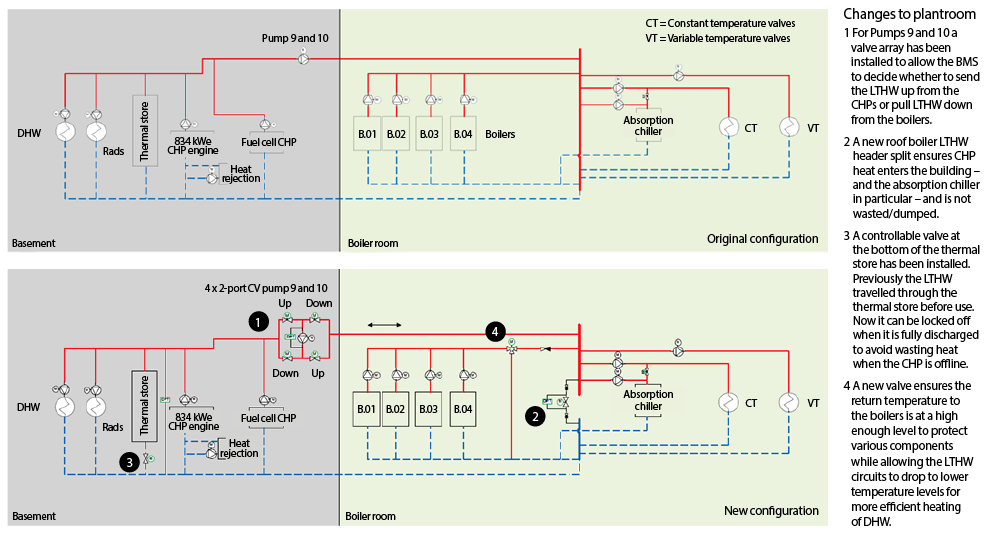 Some areas of energy use still need improvement, he says, including the ‘ridiculous’ level of out-of-hours electricity consumption. ‘Half of the electricity supply is consumed after 6pm on weekdays and at weekends,’ he says. ‘We have some out-of-hours working, but lots of people work Monday to Friday, so a lot of kit is being left on.’

TfL’s efforts to improve the energy performance of Palestra were recognised, in part at least, by the judges at this year’s CIBSE Building Performance Awards, where TfL’s Facilities Operations Team won Facilities Management Team of the Year. After its success with Palestra, it is planning to enter the awards again next year…