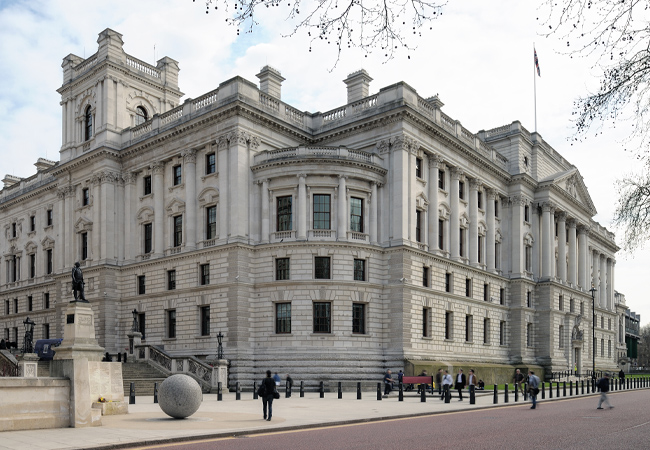 In June 2019, the UK government passed legislation committing it to achieving ‘net zero’ greenhouse gas emissions by 2050. For most councils, some of which had declared a climate emergency, the government’s target was not ambitious enough. In fact, almost two-thirds of councils in England are aiming to be carbon neutral ahead of 2050, some as early as 2030. It is a worthy commitment and an ambitious target.

It’s not just local authorities that are setting progressive carbon targets; some universities, too, have committed to be net zero in advance of the 2050 target. The University of Bristol, for example, has pledged to become carbon neutral by 2030.

The challenge faced by these large organisations, many with large numbers of properties, is to know how best – and most cost-effectively – to decarbonise their estate to meet their carbon aspirations.

A big part of the Decarbonomics solution is to make sure that all the systems work together holistically, and that the systems run efficiently

One solution being promoted by consultancy SNC-Lavalin is its Decarbonomics initiative, a commercial, data-driven service, aimed at helping public and private sector clients to assess how to decarbonise their properties to meet their carbon commitments.

‘Decarbonomics gives a helicopter view of how a portfolio is currently performing, and the property improvements that will require investment – over what period of time – to achieve a carbon target,’ says Stephen MacLoughlin, regional director, Faithful + Gould (a member of SNC-Lavalin Group), and the venture’s building retrofit workstream lead. 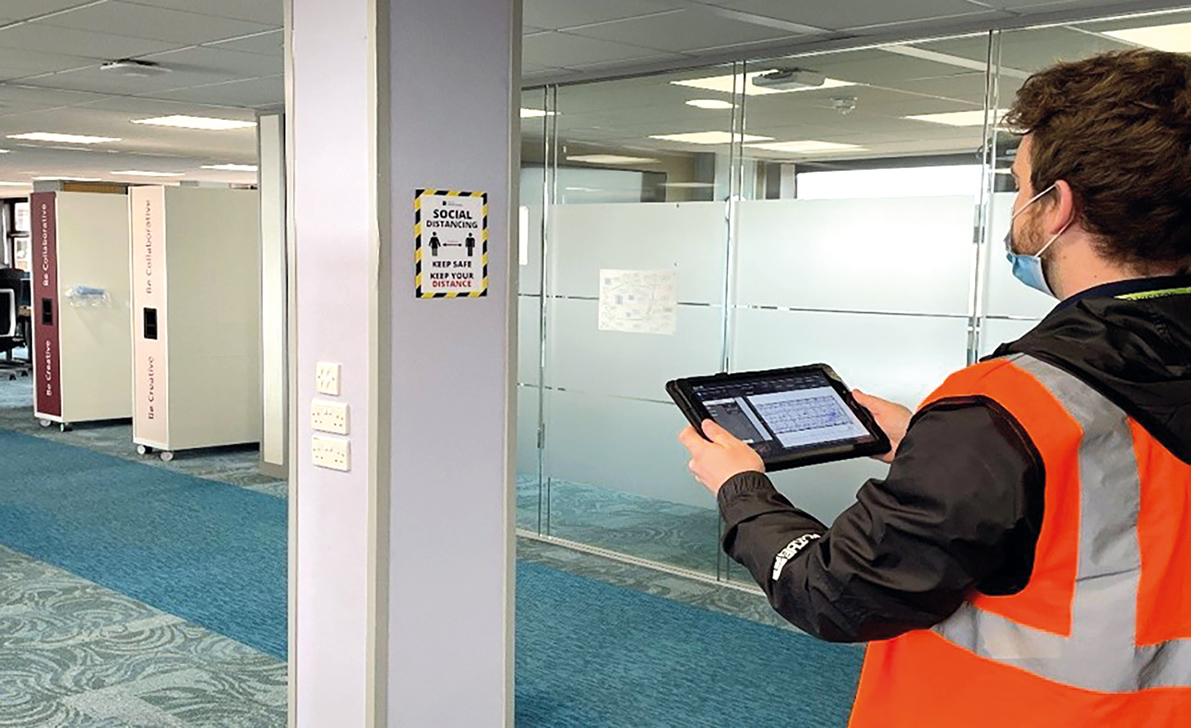 Decarbonomics is a key aspect of SNC-Lavalin’s work with the Government Property Agency (GPA), as part of its net zero and life-cycle replacement programmes framework. ‘It empowers clients to make much more informed decisions about their decarbonisation investments,’ adds MacLoughlin.

There are three steps to SNC-Lavalin’s Decarbonomics approach: benchmarking, roadmap and delivery.

An initial benchmarking exercise is undertaken to gain a detailed understanding of how a portfolio of properties is performing. This can be a relatively straightforward exercise when a client has three years of half-hourly energy data to show use profiles across the day, week and year. ‘If the data is in good order, we can feed it into our digital tools to create a dashboard,’ says MacLoughlin.

Not all clients have detailed energy data, however. ‘Quality of data can be an issue. There might be gaps in the data or insufficient detail, for example, so we’ll have to work with a client to determine the best way to understand the carbon performance of its buildings,’ MacLoughlin explains.

How Decarbonomics is being used to reach net zero carbon on a portfolio of 1980s office buildings, a data centre and warehouse in southern England.

Gas and electricity consumption data are used to provide a baseline of kilowatt hours consumed. This raw data is then contextualised based on a building’s internal floor area and information such as weather data and details of how the building has been used over the three years of energy data, which is likely to have impacted energy consumption.

‘The baseline is made up of the statistical analysis of the consumption data, but also a qualitative description of the use of the building so that you can compare carbon performance pre- and post-intervention on a like-for-like basis,’ says MacLoughlin.

Once the data is ordered, SNC-Lavalin uses it to benchmark a particular building’s energy-use profile against similar properties in similar climates, to see how it compares against the industry average. To do this, the consultant uses data from CIBSE TM46 Energy benchmarks and from its own project database. 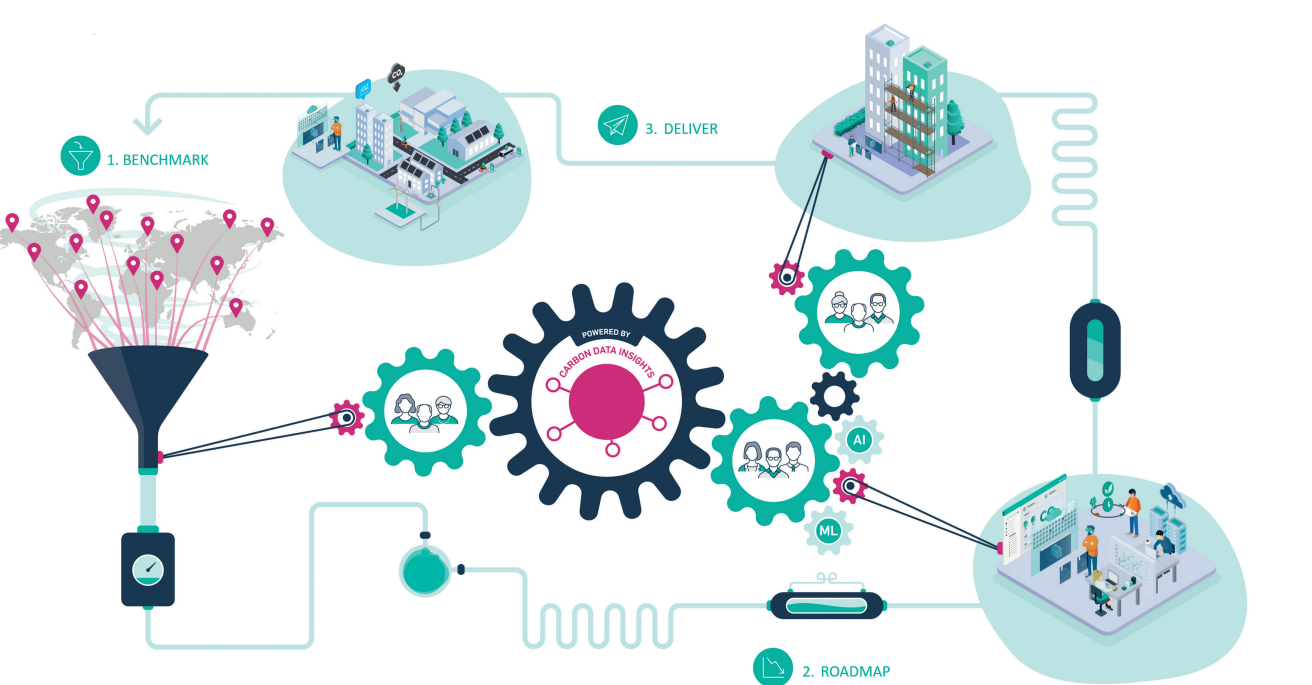 There are three steps to the Decarbonomics approach: benchmarking, roadmap and delivery

Knowing where and why energy is being consumed is one part of the benchmarking exercise; knowing the most effective interventions to reduce operational carbon emissions is another. Before the delivery stage of Decarbonomics, SNC-Lavalin undertakes a site survey to assess the condition of the properties in the portfolio. ‘In scoping the work for a particular project, our engineers and surveyors go to site to identify the opportunities to improve carbon performance,’ MacLoughlin explains.

In its work for the GPA, for example, SNC-Lavalin had a building services engineer and a building surveyor visit various sites to undertake a detailed survey. ‘The surveyors would already have the energy consumption data, so they would be looking at the condition and performance of the building fabric and M&E systems, to see what measures could be retrofitted,’ he says.

The performance benchmark data for a portfolio of properties is presented to the client using a Decarbonomics dashboard and this is key to the next stage of Decarbonomics – the roadmap.

The roadmap is intended to show a client how its buildings can get from their current carbon performance to the level that will enable them to reach their final performance destination. ‘Data from benchmarking allows us to develop the roadmap to enable the client to make informed decisions,’ says MacLoughlin.

Perhaps the most fundamental question that needs addressing at the outset is whether the estate and its make-up is right for a client’s needs, both now and in the future. ‘Do they have the right floor area where it is needed, because Covid has caused many organisations to review their estates in the light of new working practices,’ asks MacLoughlin.

Having decided on the make-up of an estate, SNC-Lavalin then uses what MacLoughlin describes as a ‘systems-based approach’ to assess potential interventions.

‘We’ll look at the impact of interventions to a building’s fabric to reduce heating and cooling loads, whether that’s through adding insulation, replacing windows, adding solar shading or improving airtightness,’ he explains.

‘Once we’ve done that, we’ll end up with a lower residual load that the HVAC systems then need to meet; then we’ll look at decarbonising heat, perhaps by replacing gas and oil-fired boilers with air source heat pumps, which may also have an impact on the ventilation and hot-water systems.’ 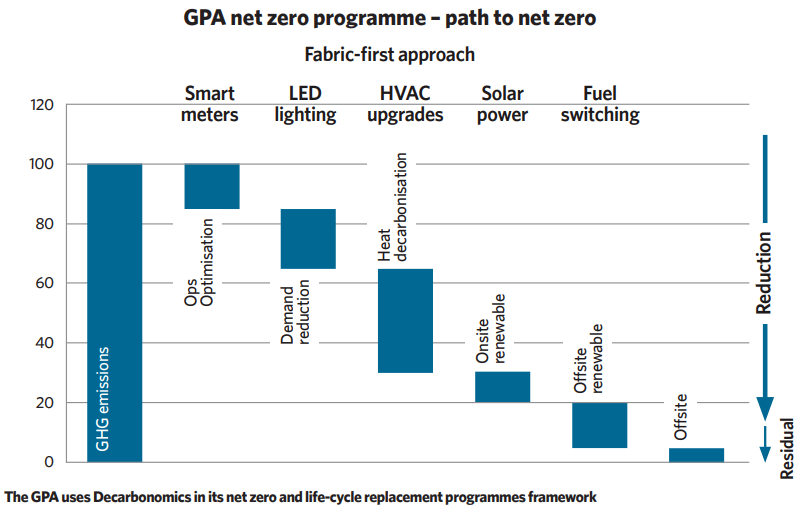 This systems-based approach includes a review of the building’s control systems and BMS. MacLoughlin explains: ‘We have to ensure the systems are right for the retrofit interventions we’re implementing and that they are optimised.’ He adds that a big part of the Decarbonomics solution is to ‘make sure all the systems work together holistically and that the systems run efficiently’.

Another aspect of Decarbonomics, which is not systems-based, is ensuring a site’s facilities management (FM) team is engaged in the planned journey to net zero. Across the government estate there are incumbent FM providers. Often, they hold the energy data records, so SNC-Lavalin will engage with them at an early stage in the process. ‘We need to ensure their buy-in and understanding, so that they can run the building as efficiently as intended,’ MacLoughlin says. ‘If they don’t take advantage of the interventions, you are not going to get the projected performance improvements.’

According to MacLoughlin, there are many routes a client can take to achieve net zero. The one selected will depend on the cost of work needed, timescales, money available, and the final carbon destination.

As a cost consultant, Faithful + Gould is able to access cost information from its database of retrofit measures. Using the dashboard allows SNC-Lavalin to look at the impact of different cost and programme options with their client, and to assess their potential impact on energy consumption, carbon emissions and financial savings.

We need to ensure the FMs’ buy-in… if they don’t take advantage of the interventions, you are not going to get the improvements

‘We can say “if you’re looking at a 10-year programme, this is how much it will cost you per year, these are the savings per year, so you could go this way, or that way”,’ MacLoughlin explains.

For a more in-depth consideration of various alternatives and options for one of its central government clients, SNC-Lavalin is using a digital twin created with IES Intelligent Communities Life-cycle software. A digital double enables the consultant to test different scenarios, to understand the most effective and coherent carbon-reduction strategy for a client’s built assets. ‘We have the actual energy consumption data, so we can align the model with consumption data. Using computer modelling and the program’s AI, we can look at the impact of different interventions, such as improving U-values of walls and windows, so we’ll get an accurate assessment of the impact of these improvements,’ MacLoughlin says. ‘Our client has more than 800 properties; we’re using the digital twin across about 20 typical build types, which we then extrapolate across the portfolio to inform prioritisation of retrofit measures – its proof of concept.’

Delivery of Decarbonomics interventions – including the appointment of contractors – is the responsibility of the client. ‘Our role during the delivery stage is as consultants, to provide programme, project management and technical support during detailed design, construction, commissioning and handover,’ says MacLoughlin. 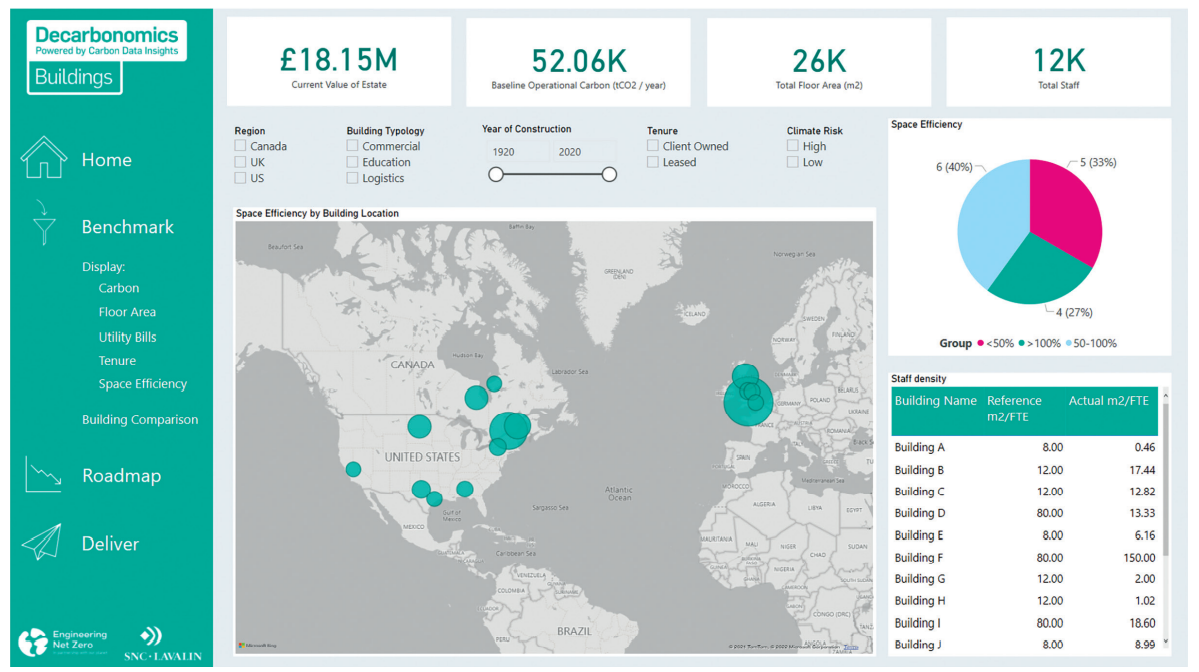 After handover, SNC-Lavalin will measure and verify the results of its interventions. It does not guarantee performance improvements, although MacLoughlin says it is in discussion with one government client about a performance-based contact. Guaranteed or otherwise, with many large organisations aiming for net zero carbon emissions by 2030, SNC-Lavalin should have a lot of interventions to verify. 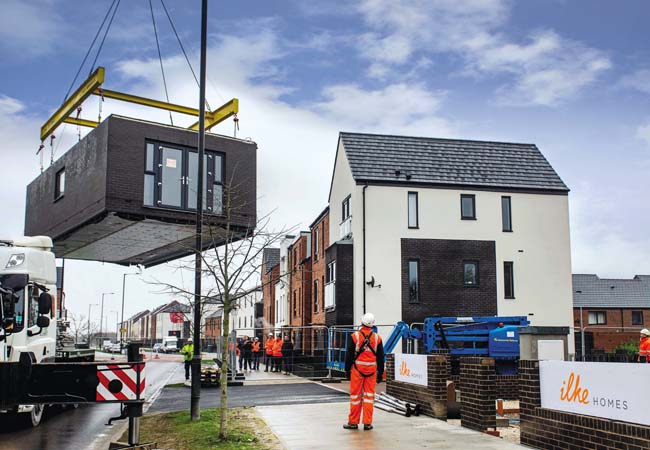 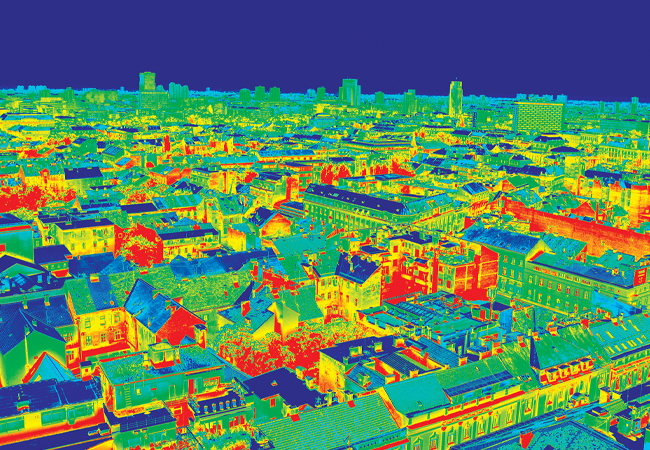 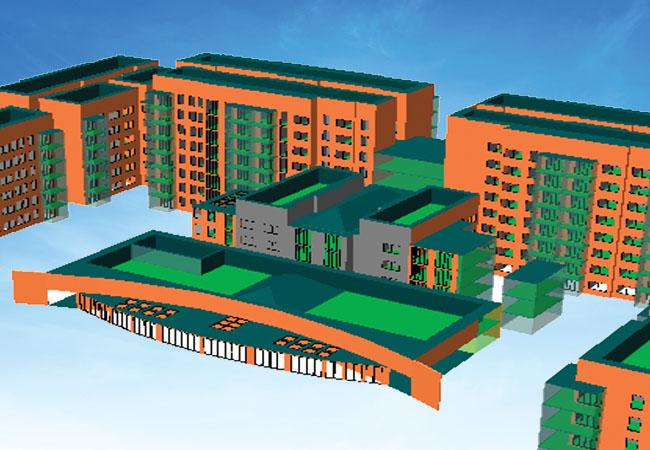