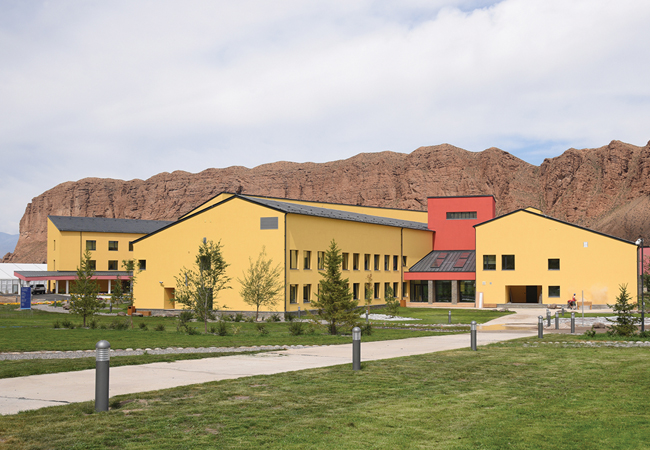 n the UK, access to quality higher education can easily be taken for granted – but it can be a different story for those living in the most remote parts of Central Asia with ambitions to attend university. However, since the completion of a new state-of-the-art university campus in Naryn, Kyrgyzstan, an internationally recognised standard of tertiary education is much more accessible for mountain communities in the region.

The facility is the first of three University of Central Asia (UCA) undergraduate campuses to open in this region, as part of the UCA’s mission to foster socio-economic development in Central Asia – particularly in its mountain societies. The campus has already welcomed its first students, from a catchment area that includes Afghanistan and Pakistan.

However, building a modern university in such a remote location presented a number of technical challenges during design and construction, which required some innovative engineering solutions.

Naryn is situated along the historic Silk Road and is separated from the rest of Kyrgyzstan by mountain ranges. Until recently, it was a six-hour drive – along unpaved roads – from the country’s capital, Bishkek. 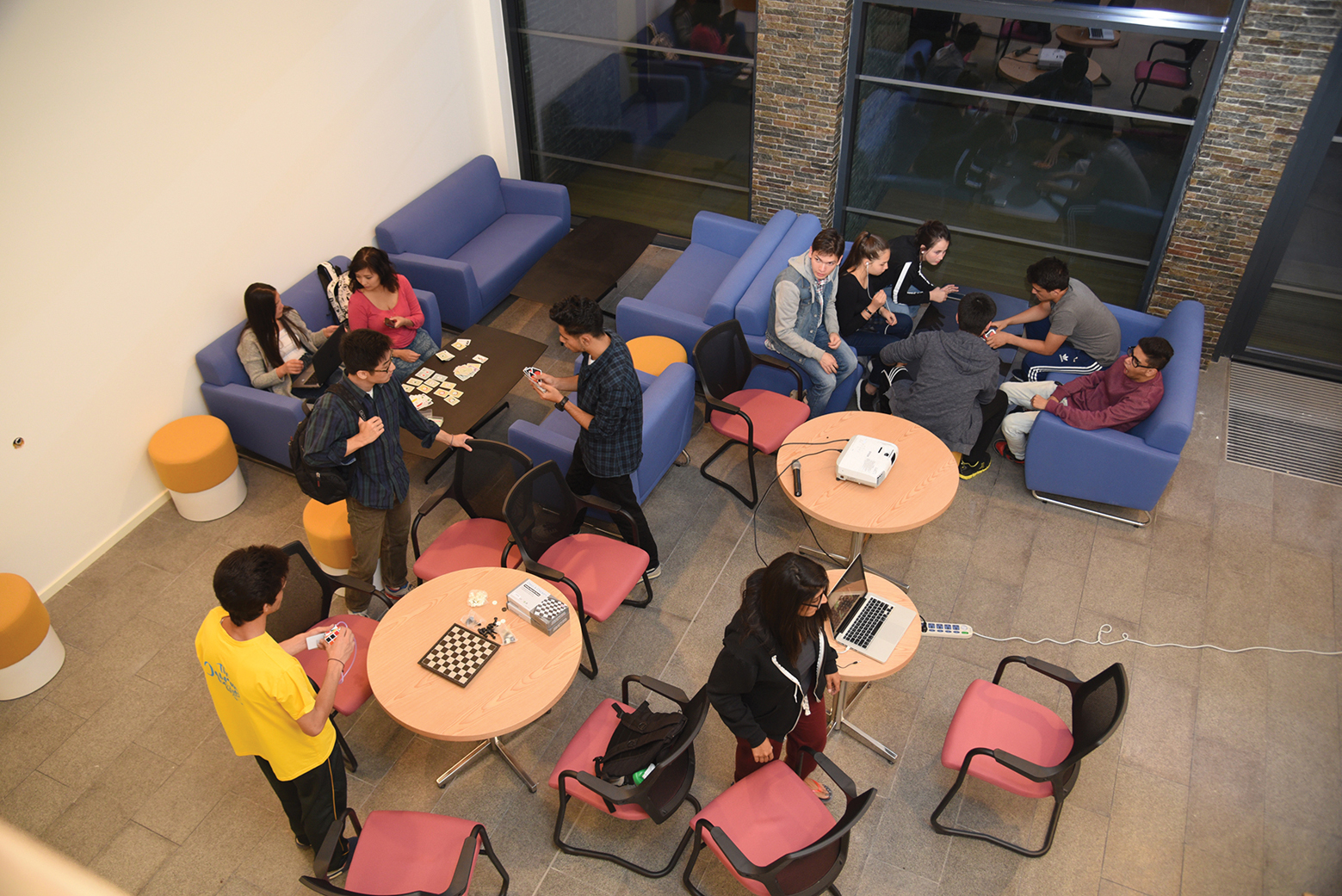 It is not only the town’s location that poses logistical challenges, but the country as a whole. Kyrgyzstan is landlocked – sandwiched between China and Tajikistan to the south and Kazakhstan to the north – so long land journeys are required to get to the nearest coastal ports and other areas of major commerce. It can take several months for big items to be transported over land, so selection of equipment for the campus – and the availability of maintenance and replacement parts – were important considerations for the project.

Naryn is at an altitude of more than 2,000m and this elevation – coupled with the town’s location in the middle of a large, continental land mass – results in a wide range of climatic conditions. During the summer, temperatures are typically between 25°C and 30°C, while, in winter, it can plummet to -30°C. Given this temperature range, creating a comfortable, safe environment for occupants of the university was a particular challenge.

Because of the campus’s remote setting, there is limited infrastructure and access to utilities, so – with the exception of electricity – the site is entirely self-sufficient. Its potable-water needs are met from new boreholes within the grounds of the campus and there is sufficient water storage beneath the main academic building to ensure a secure supply over a prolonged period. The boreholes are also used for the site’s irrigation requirements. Grey and black water is treated on site, using the university’s own treatment plant – which meets internationally recognised standards – before being safely discharged into the Naryn River.

Heating and cooling the facility proved to be the greatest challenge – and even the availability of a reasonably secure supply of hydro-electricity didn’t solve all the issues, as the Kyrgyz government’s energy policy precludes the use of electricity for heating. In the absence of any district heating, mains gas or biomass, Naryn’s residents often resort to burning coal or dried animal waste for heat during the winter.

The project team considered several options for heating and cooling the campus that would both be sustainable and minimise the impact on the local electricity grid. It concluded that a heat pump system would be the optimum solution – so finding a system that is easy to maintain and uses products readily available in Central Asia became a priority.

In the absence of any district heating, mains gas or biomass, Naryn’s residents often resort to burning coal or dried animal waste for heat during the winter

Traditional air source heat pumps were ruled out because they can’t function in very low temperatures. Taking water directly from the Naryn River was also considered for water source heat pumps, but this would only be effective in summer because the river freezes in winter. After analysing the ground-water temperature at the site over a 12-month period – and obtaining favourable results – it was decided to use an open-loop ground source heat pump system.

Ordinarily, off-the-shelf heat pumps that produce heating and cooling simultaneously would be the ideal solution. However, such equipment is not available in Central Asia; nor is the technical network to support it. Instead, Aecom selected standard water source heat pumps, which were available in the local market and, so, maintainable. The units were arranged schematically to deliver heating and cooling to the building and its systems simultaneously, while maximising efficiency.

There are several operating scenarios for the heat pumps and boreholes, which are summarised below:

When operating temperatures allow, water is taken directly from the aquifer – via heat exchangers – to the air handling units’ (AHUs’) cooling batteries, chilled beams and underfloor cooling, bypassing the need to run the heat pump. Only when cooling loads go outside pre-determined set points do the heat pumps need to operate – and then only for the AHUs. The chilled beams could benefit from free cooling at all times of the year. 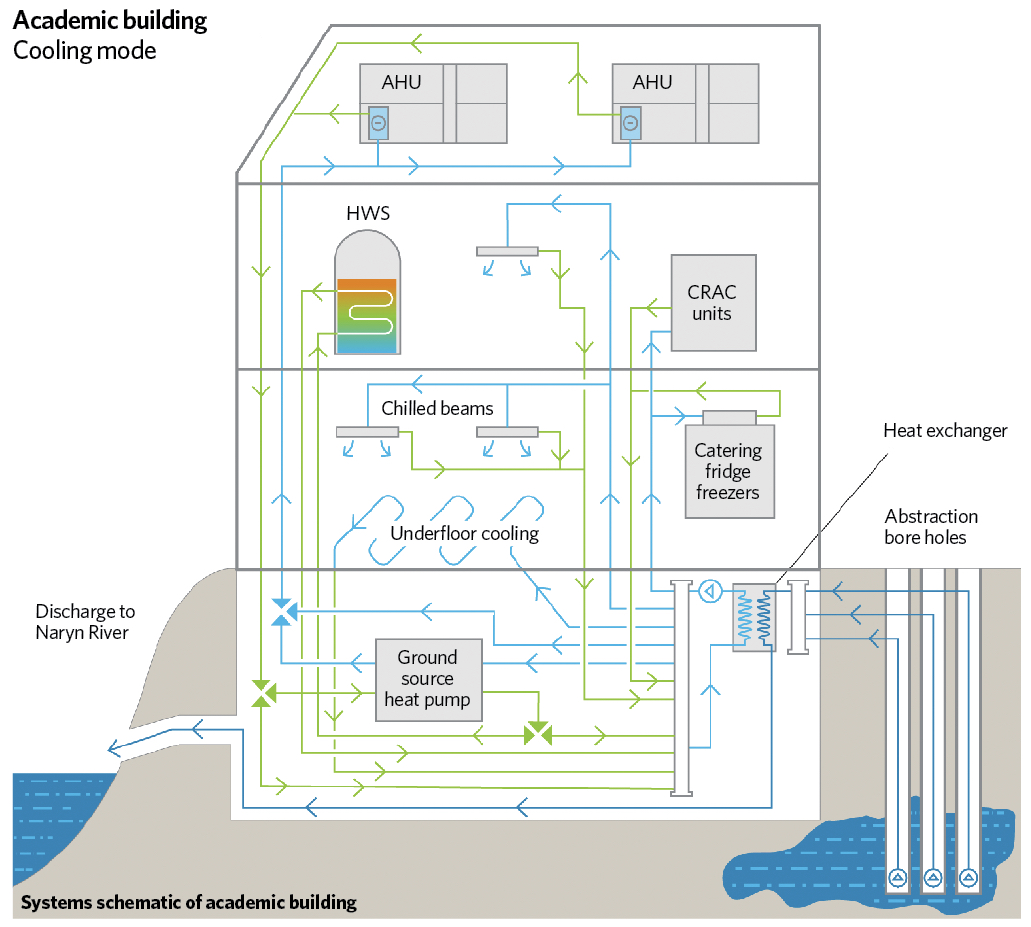 In summer, the waste condenser heat generated by the heat pumps is used to pre-heat the domestic hot water circuits by elevating the temperature of the incoming water. The calorifiers then elevate the water temperature further, using electrical immersion heaters, to reach the final hot-water service temperature. When there is no ‘free heat’ available from the refrigeration cycle – and the heat pumps
are in heating mode – the calorifiers take their heat directly from the heat pump LTHW header. 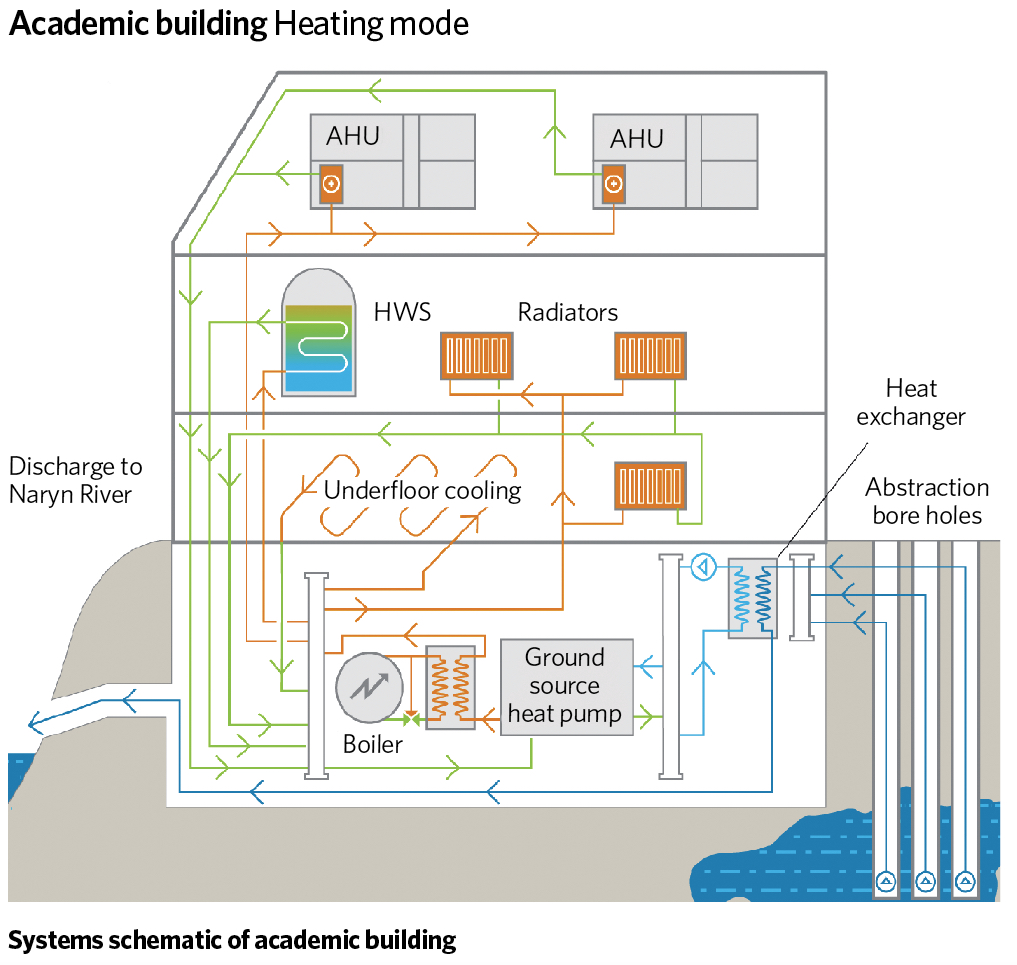 Despite the challenges of finding a solution and then implementing it, being able to create a safe and resilient environment for the university’s staff and students is what made the scheme particularly rewarding. Aecom delivered a range of multidisciplinary services for the project, including masterplanning, landscape design, civil, structural and MEP engineering, and a range of specialist disciplines.

The campus includes a new academic building with a library, dining hall, laboratories, classrooms and faculty housing, as well as student dormitories. As part of the UCA’s broader commitment to boosting local economies and developing host mountain towns into vibrant university centres, the project team engaged with local communities throughout design and construction. Aecom’s team visited schools and delivered presentations to students about the evolving campus design, including civil and structural engineering and landscape design.

It is immensely satisfying to have worked on a project that will give isolated mountain communities access to an international standard of education. The campus will bring a range of benefits to the area, acting as a catalyst for social and economic development in remote mountain regions.