Around the outside of the elliptical, Grade I-listed Royal Albert Hall is a 250m-long terracotta mosaic frieze depicting ‘The Triumph of Arts and Sciences’. The frieze is a reference to the 150-year-old London concert hall’s original dedication. It might equally be applied to the work of Loop Engineering’s displacement cooling scheme for the upper tiers of the giant auditorium.

‘The need for comfort cooling of the Rausing Circle and Gallery Levels (the top two balcony tiers) was apparent from the high number of complaints received about the uncomfortable temperatures. Various teams at the Royal Albert Hall had experienced temperatures in the region of 37°C. As a result of this Royal Albert Hall projects engineer Neal Hockley, with support from the Trustees of the Hall, pushed to ensure the best environmental conditions in the hall.

Uncomfortable temperatures were also recorded during a performance of Phantom of the Opera in 2011. ‘We have reviewed graphs from the 2011 cooling trials, detailing the temperature on the upper tiers nearing 33°C during this performance,’ says Marcin Silinski, director at Loop Engineering. Clearly, there was a need for a comfort cooling solution for the 1,500 seats up in the gods. 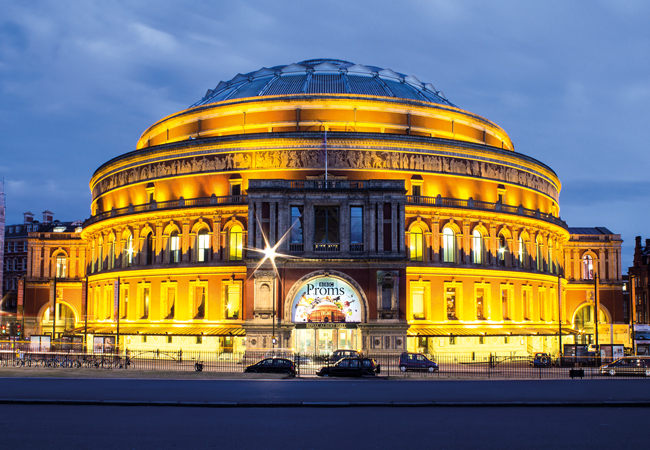 The Royal Albert Hall is celebrating its 150th anniversary this year

Fortunately, the overheating problem was confined to the upper tiers after the successful refurbishment of the auditorium’s displacement ventilation system under an earlier phase of the Hall’s refurbishment masterplan (see panel, ‘A decade of improvement’). This is fed from an air handling unit (AHU) that was originally intended to supply up to 28,000L.s-1 of outside air. However, the airflow rate has been increased to 35,000L.s-1, following Covid-19 mitigation fan improvements as assessed Loop Engineering during the Hall’s closure during national lockdowns. ‘Before, only the lower [ground and second] tiers were cooled by the displacement ventilation but the chilled air did not reach a significant portion of spectators at the upper tiers,’ says Silinski.

A proposal to install a dedicated cooling system serving the upper two tiers was first put forward in 2013. For the circle, this involved installing 20 mini-AHUs in the wedge-shaped undercroft beneath the circle’s banked seating. The undercroft was to be used as an air plenum, which would supply conditioned air to the auditorium via grilles set into the risers beneath the lower rows of seats. Return air was ducted back to the AHU via grilles set into risers beneath the upper row of seats. For the gallery level, this involved the use of fan coil units.

A decade of improvement

Since 2014 the Royal Albert Hall has undergone a number of major services replacements and improvements. Loop was involved in 2014 and from 2018-2021

The 2013 circle-cooling proposal was trialled using a single mini-AHU connected to temporary supply and extract ducts. ‘During the trial period, the air temperature in that area of the circle is reported to have dropped from 33°C to 26°C, to the delight of the Hall; this demonstrated it was feasible to deliver comfort cooling to the upper areas of the auditorium,’ says Neill Jones, senior project engineer at Loop Engineering.

Loop’s involvement with the Royal Albert Hall began in 2014, a year after the trial, when the engineer was appointed to technical support and resident engineer roles. It was not until 2017, however – after upgrades to the chillers, boilers, low temperature hot water, and building management system (BMS) – that Loop was tasked with engineering a cooling solution for the upper tiers.

Silinski says the cooling needs to be able to cope with heat loads from the audience, solar gains, small power and lighting (both stage and auditorium). As the detailed design for the system started to be developed, it was soon apparent that the original proposal needed to be adapted for it to work effectively.

The pressure drop was compounded by the heritage grilles that had to be used in the Grade I-listed interior, and by a ring beam uncovered once strip-out of the undercroft started. Air is supplied underneath the seats in rows one to four; it is returned to the AHU via 300x300mm return air grilles beneath the seats in row six. ‘We had to drop [the return air channel] around the ring beam, which added further resistance in the system,’ says Silinski.

Acoustics were another issue that had to be carefully considered. The new system had to be extremely quiet so as not to distract the audience and performers during quieter movements in a classical music concert.

Even more importantly, the engineers had to design the system so it could not be heard by orchestra conductors, many of whom have very acute hearing. Accordingly, the fan speeds have been kept deliberately low, and the supply and extract ducts have been fitted with carefully considered acoustic attenuation devices.

‘We had to provide a world-class experience to the audience. It was for this reason that we worked with the AHU manufacturer to design the 20 bespoke down-flow AHUs, to ensure there was no perceptible impact on the auditorium’s noise rating,’ says Silinski.

The further the design progressed, however, the larger the AHUs became – so, in an attempt to keep the bespoke units as compact as possible, the cooling coil was inclined. Even with this modification, however, the AHUs were now too big to fit in the undercroft and had to be located in a series of specially built cupboards in the circulation corridor adjacent to the undercroft.

In response to the Covid pandemic, the team investigated fitting ultra-violet sterilisation units to the AHUs, but space restrictions ‘meant this was impossible’, says Silinski, who adds that air quality has been tackled in a separate project. In addition to increasing the supply of outside air on the main air handling plant, mobile, Camfil air scrubbers have been positioned around the building to help clean the air. 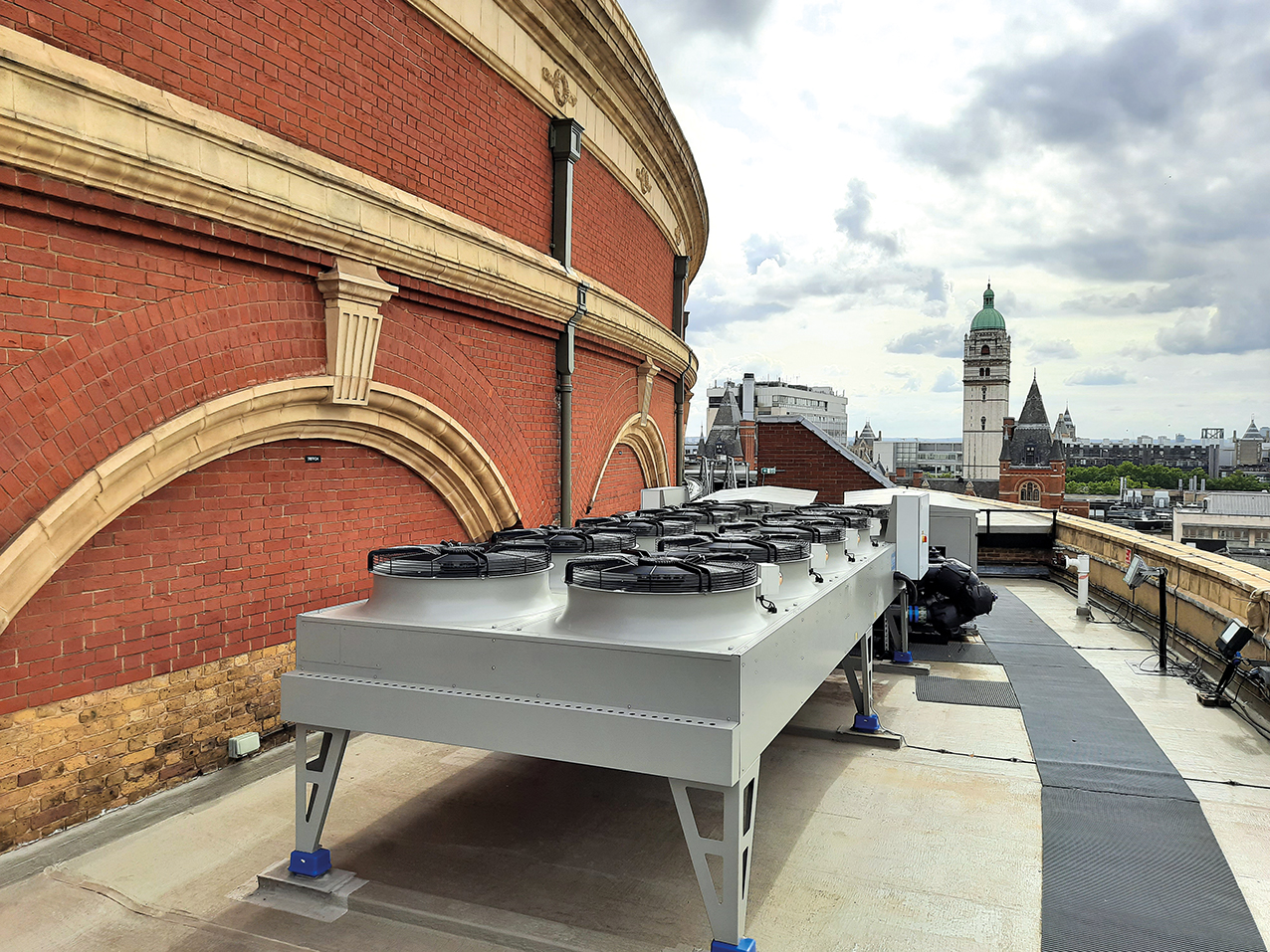 National lockdowns helped the contractor when it came to installing the circle-level AHUs. The plan had been to cordon off only the areas of the corridor where the AHUs were being installed. However, with the Hall closed to the public during lockdown, the contractor could do away with the piecemeal approach and take over the entire corridor. ‘This made it much easier for the contractor and safer for the operatives, because they could maintain a safe distance,’ says Jones.

The floor-standing AHUs are fitted with variable speed, plug fans, which can deliver up to 1.8m3.s-1 of chilled air. A point of discussion between Loop Engineering and the Royal Albert Hall was the temperature at which the chilled air should be supplied. According to Jones, the displacement air system serving the lower tiers of the hall supplies air at a temperature difference (ΔT) of 8K, without complaints.

‘From textbook design, we were not entirely comfortable supplying air with such a large delta T so close to the feet of the audience,’ he explains, ‘so we’ve opted for a delta T of between 4K and 6K at peak load, but with the in-built capacity for the client to increase the delta T if additional cooling is required.’

The final design uses 20 AHUs, strategically positioned to supply six circle cooling zones. A purpose-built return air path has been incorporated into the circle soffit. The units are designed to operate in either classical or rock mode to reflect the difference in heat gains from the audiences for all the different musical genres. 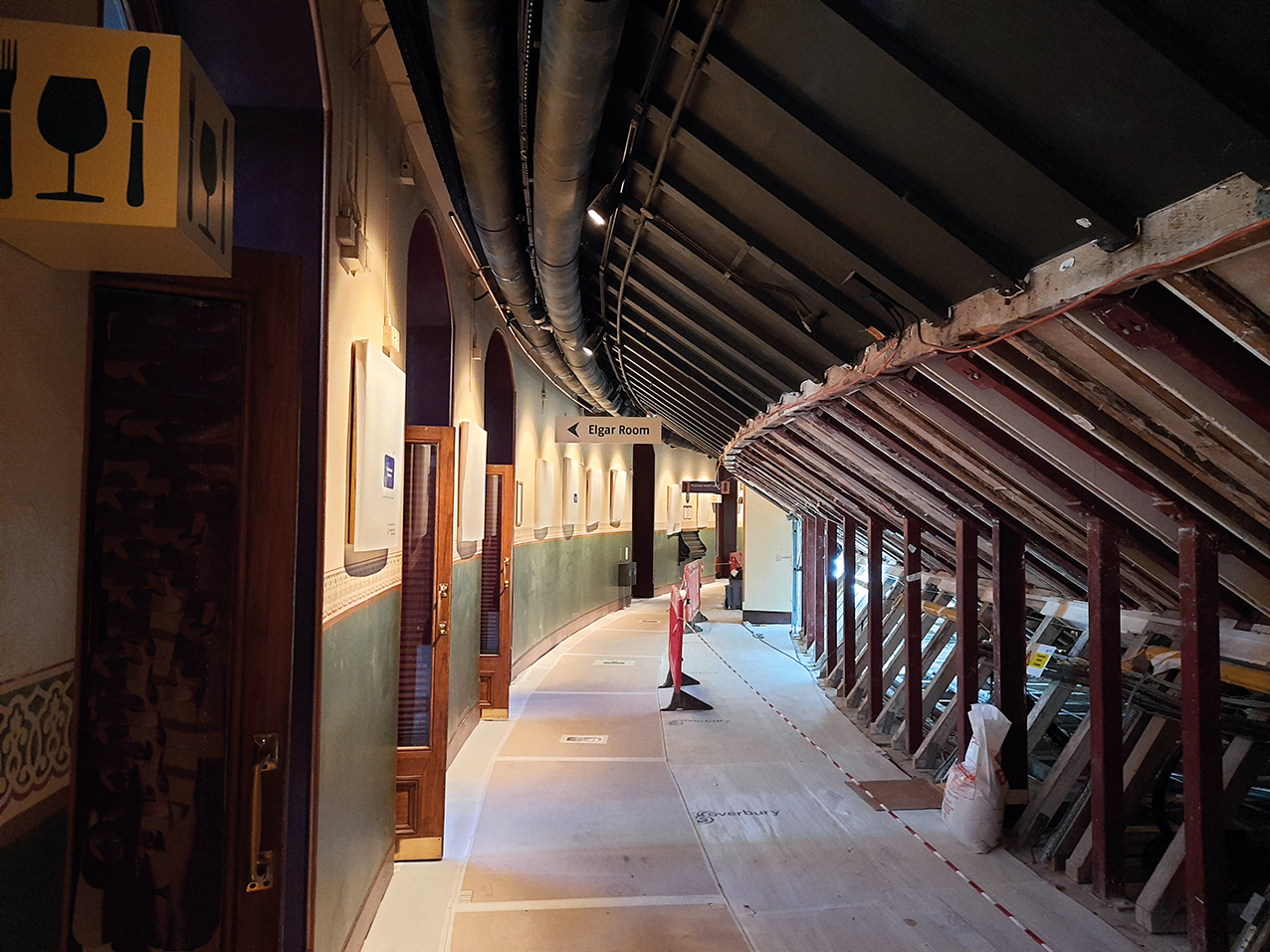 AHUs were installed in specially built cupboards in a circulation corridor

‘For a classical concert, people will be seated, so the latent heat gain will be low, whereas, at rock concerts, people tend to dance, which increases the total heat gain,’ says Jones. ‘During rock concerts or louder performances, the noise rating of the auditorium is not so critical; this allows the fans to be ramped up to deliver the cooling required.’

The team was fortunate that much of the secondary circuit chilled water pipework had been installed during an earlier phase of the project, so the cooling capacity of the overall system was increased and the chilled water was distributed from the existing service to the new cupboards.

The task of providing cooling to the colonnaded gallery level (the tier above the circle) was far more straightforward. Fan coil units installed on the gallery during an earlier phase of the refurbishment project had cooling coils fitted in anticipation of a future increase in the Hall’s cooling capacity. So, new pipes were run from the existing secondary circuit on the circuit level to the coils, and enhance the cooling. 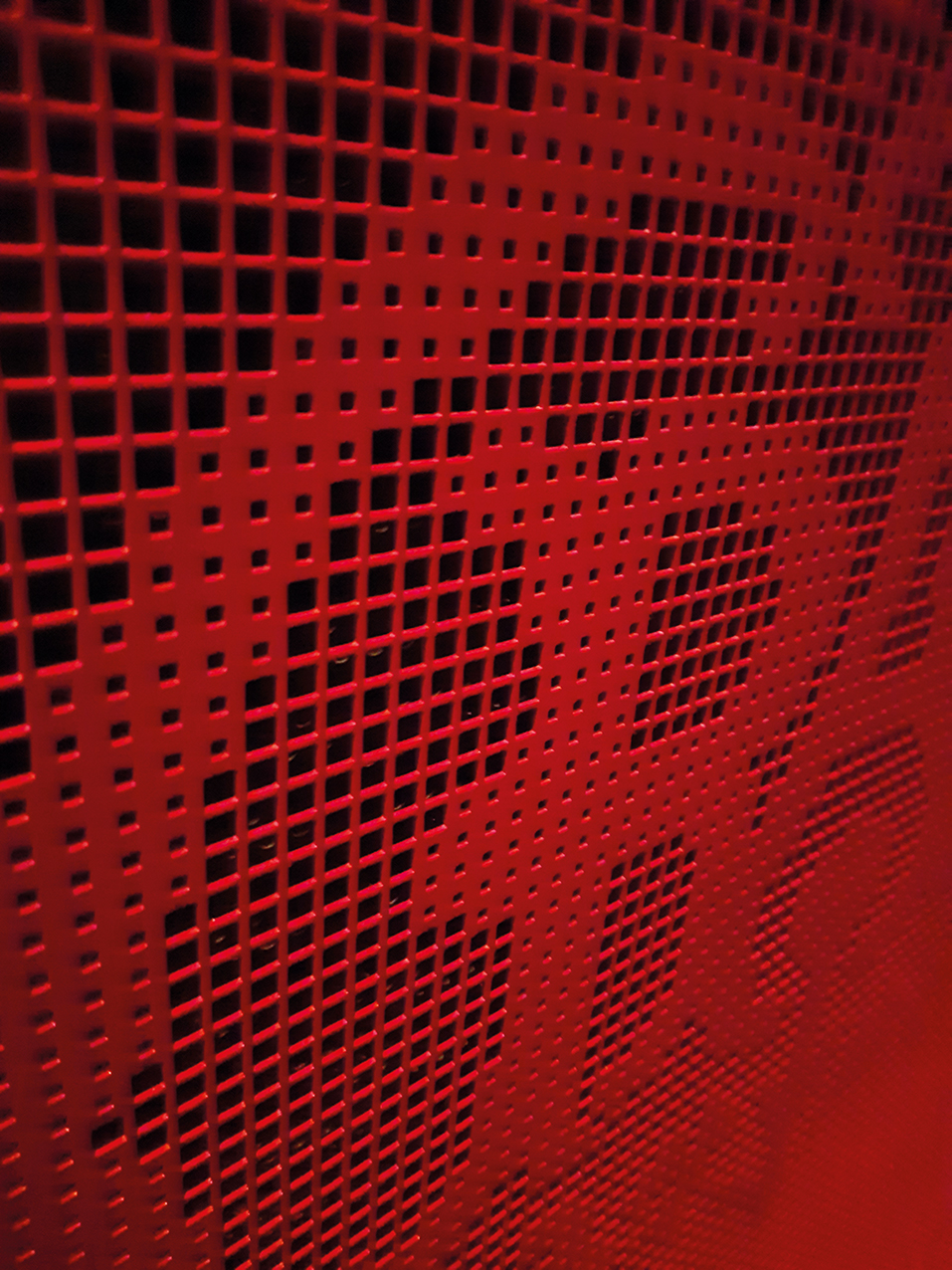 A total of 800kW of cooling was installed. This incorporated: 120kW from two existing chillers that were to be removed under the scheme (providing cooling to various serveries and restaurants); 265kW of cooling for the circle and gallery; and 415kW additional capacity for the future expansion of the restaurants.

The project team had to convince the planners to allow the installation of four 200kW chillers on the ring of flat roof directly above the terracotta frieze. To help minimise the units’ visual impact, they specified flat-bed remote air-cooled condensers for heat rejection to keep their height to a minimum. The 2m-high chillers tight against the back wall of the roof terrace (furthest from the parapet), to ensure they were out of sight of pedestrians below. The 1m-high air-cooled condenser units were positioned in front of the chiller, and were low enough to be concealed by the parapet. Fortunately, it was a solution welcomed by the planners.

Strict noise restrictions imposed by the London Borough of Westminster under its night-time noise bylaws mean the chillers cannot exceed 75% of the cooling demand after 11pm, regardless of whether a concert has finished. Silinski says not many shows that require cooling go beyond 11pm, but under such circumstances the volume of the cooled inside space – and the building’s thermal mass – will help maintain comfortable conditions within the auditorium. He adds that, on days when it is exceptionally warm, the chillers will be set to run for two or three hours before the audience arrives to pre-cool the auditorium.

‘Many surfaces in the space have a high thermal admittance, so when the audience arrives, the space is quite cool,’ says Jones. 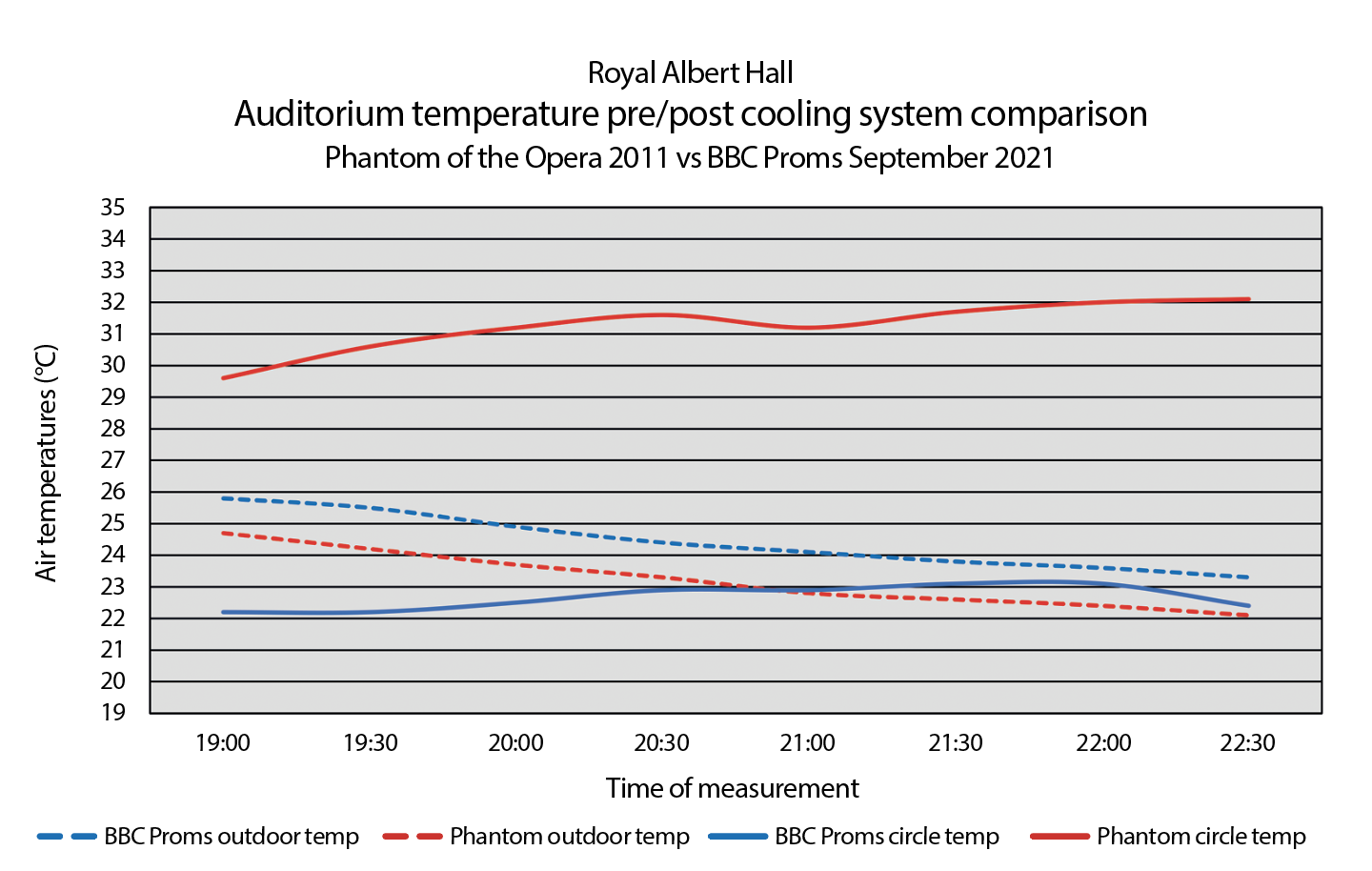 On one of the hottest days of 2021, during the BBC Proms, the circle temperature was a maximum of 23.5°C

The engineer has the BBC Proms to thank for proving that the system works. ‘For a near sell-out concert in September 2021, which coincided with one of the hottest days of the year, the Hall’s BMS temperature sensors recorded a maximum temperature in the region of 23.5°C in the circle,’ adds Jones.

‘This is a vast improvement on the temperature experienced in the 2011 cooling trials, and would suggest there is scope to reduce the pre-cooling duration or reduce the delta T, to bring the auditorium temperatures to 24-25°C, in line with CIBSE Guide A recommendations for summer auditoria temperatures.’