For the first time, three engineers have been crowned winners at the CIBSE Young Engineers Awards, which were held last month.

Judges named FairHeat’s Lucy Sherburn as CIBSE ASHRAE Graduate Engineer of the Year for her excellent live online presentation on the challenges engineers will have to overcome to deliver sustainable and safe environments for future generations.

The title of Apprentice of the Year (Degree Level 5-7) was awarded to Josie Cheeseman, while Harry Playfair won the corresponding award for Technician Level 3-4. This was the first time the CIBSE Apprentice award had been split into two categories, reflecting the increased interest in apprenticeships as a route to a career in building services engineering.

In his speech before the presentations, CIBSE President Kevin Kelly praised the extra apprentice award. ‘As a former apprentice, I’m particularly interested in this competition,’ he said. ‘Apprenticeships enable you to earn and learn, they increase diversity, and young people create a responsive dynamic in the workplace and fresh ideas.’

The entrants recorded a film that was judged by an expert panel before the ceremony. Entries were of a very high standard, according to CIBSE Board Member and judge Vince Arnold. ‘It was warming for us, as judges, to find the passion and excitement – and the fact that all the apprentices said how grateful they were to their employers and colleagues for giving them the practical experience that comes with an apprenticeship,’ he said.

The first prize in each of the apprentice categories was £500, with the runners-up each receiving £300 and the third-placed finalists receiving £200. 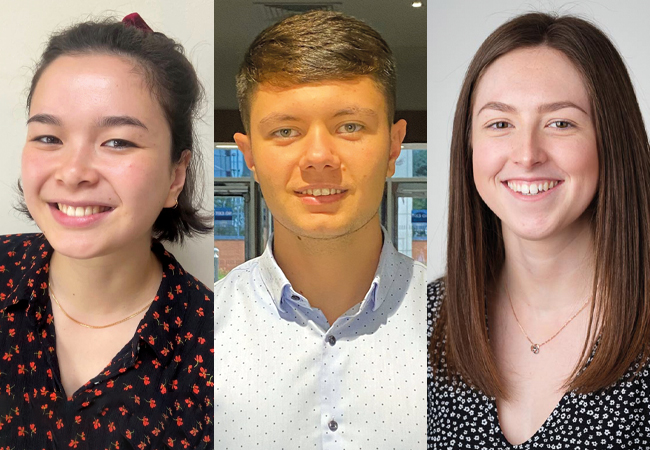 Sherburn was one of eight graduate engineers who presented live at the virtual event, which mirrored the format of the live event that took place before the pandemic, at iMechE’s headquarters in London.

Speaking without slides, Sherburn said that inertia was the greatest challenge engineers would have to overcome to deliver sustainable and safe environments. ‘Climate change is challenging existing natural environments, but society is resisting transformation,’ she added.

Social inertia was preventing engagement in sustainability, Sherburn continued, in part because low carbon technologies were too complex. That inertia in regulations meant standards and guides were out of date, while – in the built environment – it meant industry not having the skills to retrofit buildings vulnerable to climate change. ‘If there’s a skills gap, it means theoretical performance will not be transferred into reality,’ she said.

Education was key to overcoming inertia, Sherburn told the audience, and she urged engineers to focus on non-disruptive, customer-centric solutions. Regulations had to be more pragmatic, she added, and there needed to be an extensive programme to retrain gas engineers to install heat pumps.

The FairHeat graduate engineer concluded her presentation by saying the response to the Covid-19 pandemic had proved that change is possible. ‘It could be the catalyst that overcomes the inertia in moving towards a sustainable and safe built environment,’ she said.

Sherburn declared that she was shocked to win the award and credited previous winners with inspiring her to enter. ‘As a young female engineer who entered the industry two years ago, it was important to have female role models who had won this award and were achieving great things,’ she said.

She revealed that she had already had offers to speak at conferences through being shortlisted for the award. ‘It will help me network and be recognised. Hopefully, I can use this position to influence change in my industry – in the area in which I work, decarbonising heat, and in making the industry inclusive for all types of people,’ she said.

As the CIBSE ASHRAE Graduate Engineer of the Year, Sherburn wins an all-expenses paid trip to attend the ASHRAE conference in Las Vegas next year. As a heat network engineer, she is keen to see how America is decarbonising, and will have another reason to celebrate in Las Vegas – the conference falls on her birthday!

The Graduate of the Year runner-up, Matthew Dickenson, from Aecom, argued that sustainability had to be achieved by focusing on other factors, such as occupant wellbeing and comfort.

Industry had to act swiftly to address issues in existing building stock, he said, particularly in low-income neighbourhoods, which are suffering from poor indoor air quality, and punitive energy costs, even before considering the expense of decarbonisation.

Dickenson also highlighted the importance of wellbeing among engineers. ‘We’re intrinsically passionate people, and we pour ourselves into our work. Combined with the current work climate, it’s no wonder so many of us struggle with our mental health,’ he said. ‘We must find a new normal that works for everyone. Not only to retain talent, but to foster creativity and drive new recruitment.’

Third in the CIBSE ASHRAE award was Elementa’s Yara Machnouk, who won £300, provided by the Manly Trust. In her presentation, she described a sustainable and safe environment as being one where people feel mentally and physically at their best – which meant shielding them from external sources that can create stress and discomfort.

There were five challenges for engineers to address, she said: adapting buildings to cope with extreme climates; reducing energy consumption; using renewable sources more efficiently and economically; integrating nature-based solutions in design processes; and ensuring energy equity across the globe as demand rises.

‘I think we need to delve deeper into nature based-solutions and quantify the social value they bring to a scheme,’ she says. ‘The simplest way is planting trees. The rate at which we are creating carbon is not in line with the rate we’re sequesting it,’ she says.

There is much to learn from countries that use passive solutions, added Machnouk. ‘Engineers worldwide need to support each other to avoid repeating mistakes of embedding inefficient solutions into our buildings that will cause harm to our environment.’

Graduate of the Year runners-up Matthew Dickenson and Yara Machnouk

CIBSE ASHRAE Graduate of the Year

Apprentice of the Year, Technician Level 3-4

Apprentice of the Year, Degree Level 5-7

The Young Engineers Awards were sponsored by ACV, Ideal Heating and Swegon, and supported by ASHRAE. CIBSE Patrons was the event partner.