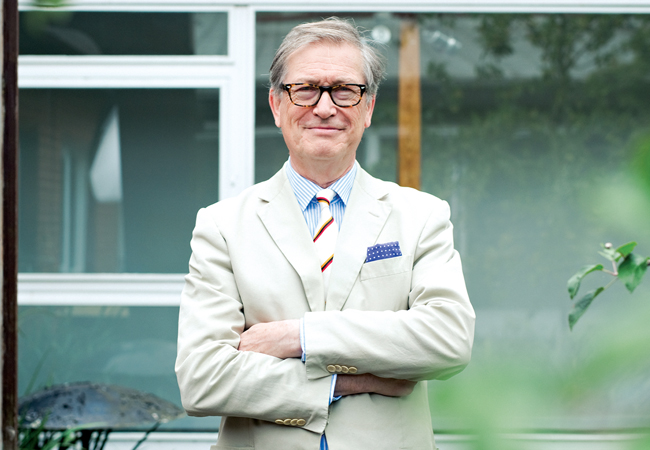 Professor Alan Short outside Clare Hall, at the University of Cambridge, where he is a Fellow. Credit: StillVision

Despite creating some of the UK’s most acclaimed modern buildings, Professor Alan Short’s ambition is not to produce showstopping Stirling Prize winners, but to rediscover the lost art and science of designing low-energy buildings.

In his book The Recovery of Natural Environments in Architecture1, Short makes a compelling case for architecture based on engineering rigour rather than the artistic whims of designers. ‘Most architects nowadays don’t know where the architecture has come from. People have wilfully forgotten,’ says Short. ‘The language of classic modernism is completely and deliberately not resilient. It’s incredibly lightweight, very glassy, blow-away architecture.’

Such glass-and-steel designs are only made habitable by energy-intensive air conditioning, says Short, who believes designers should look at how natural forces were used to create comfortable conditions before the advent of artificial cooling. Today’s architectural idioms, he says, will not be robust enough to withstand the rising temperatures caused by climate change. ‘Within 20 years, glass towers will be a liability for whoever owns them. Urban heat islands are developing so fast that, even when air conditioning is overspecified, it will soon be underspecified. There will be a massive energy bill. They will be pariah buildings.’

A recent spate of glass towers in China is making matters worse, says Short, who reports in his book that air conditioning in the mid-2000s accounted for 15% of the country’s annual power consumption and up to 40% in the summer. Short, who describes his practice as research-based, is the principal investigator on a joint Chinese/UK initiative2 to come up with retrofit strategies that would cut energy use for millions of Chinese buildings. ‘I’m really interested in solutions you can roll out thousands of times,’ he says.

Short argues that architects must look at how their predecessors designed for a wide range of climatic conditions before the invention of ‘artificial weather’. His book summarises some of his extensive research on historic naturally ventilated buildings, which aims to re-establish a common thread of learning that – according to Short – was abruptly cut by Willis Carrier’s application of mechanical air conditioning in the early 20th century.

“My buildings are not more expensive. You shift money into the superstructure and enrich the environment”

His subjects include Dr David Boswell Reid and his ventilation for the temporary Houses of Parliament, and the American surgeon Major John S Billings, whose research on hospitals brought him into contact with Florence Nightingale and her work on hospital wards and cross-ventilation. Arguments are supported by scientific evidence that Short and his collaborators have gathered since the 1980s, when he designed his first naturally ventilated, masonry building for a Maltese brewer. The opportunity to work on the Simonds Farsons Cisk brewery came after Short attended a summer school for young architects in Malta, during a period of political isolation for the country. Import duties of 70% meant relying on resources from the island, and this changed the client’s original plan for an air conditioned, industrial shed to a naturally ventilated building made from local, load-bearing limestone. Ventilation stacks 14-metres high helped drive significant airflow through the building, cooling the thermal mass and dissipating heat.

The building was modelled with what was thought to be the first algorithm developed for stack ventilation. It was created by Professor Nick Baker, of the University of Cambridge – an early example of Short collaborating with academics to drive innovation. The model predicted that, during an extreme heatwave, night ventilation would remove the previous day’s heat and maintain peak internal temperatures well below external peaks. After completion, Short collected data from the head brewer that proved the success of the design; surface temperatures remained stable at around 23°C as external temperatures exceeded 38°C. It was calculated that the cooling strategy would save the brewery around 70 tonnes of CO2 annually. ‘They brew Carlsberg in that building. It put paid to the lie that you need air conditioning in metal sheds. The M&E industry was very sceptical at the time,’ says Short.

Short’s designs require more collaboration at an early stage, as the form of a building is integral to the ventilation strategy. ‘My buildings are more complicated, but they are not more expensive, because less money goes into the M&E budget,’ he says. ‘You shift the money into the superstructure, and you enrich the environment.’ Short estimates that M&E made up 30% of the cost at the Queen’s Building, whereas, typically in a laboratory, 50% of the cost would be for services.

The complexity of large, naturally ventilated buildings is a challenge for the UK supply chain, says Short, whose design for University College London’s School of Slavonic and East European Studies was the first modern building to use passive down-draught cooling. The design took 18 months to commission because of the difficulty in integrating components with the building management system (BMS). ‘Between the BMS and the 300 moving components, there were seven contractors. The separate components may have worked, but the linkages were quite weak,’ says Short, who co-authored a paper on the building.3

Short says there is an opportunity for manufacturers to supply systems that integrate software and hardware. ‘There’s a huge amount of money to be made delivering complete systems, with variations for different climates,’ he says. ‘You could bring together the best subcontractor in each field.’

However, the litigious nature of construction discourages the innovation necessary to improve buildings, he claims. ‘The atrophying of the construction industry because of contractual arrangements – and the appalling penalties for making mistakes – has paralysed everything.’

As professor of architecture at the University of Cambridge, Short has access to some of the world’s leading academics in areas such as fluid dynamics. But he laments that there are no graduate research degrees in architecture – as there are in engineering – and he says engineering content on many architectural degrees is rapidly disappearing. ‘The best path for a young architect is to be a practitioner and academic, and step between the worlds,’ he says.

Short ensures there is plenty of engineering in Cambridge’s architecture degrees, while the history of art department, next door, ensures students are open to lessons from the past. ‘The divisions between the professions are unhelpful,’ he says. ‘You need a superskilled team who can understand a lot of things happening at the same time.’

According to Short, designers will have to look beyond building professions to solve one looming threat to human wellbeing – antimicrobial resistance (AMR). ‘The world that can deal with AMR is interdisciplinary. New professions are being created that involve biologists and medics,’ says Short, who believes a focus on air quality and movement is central to dealing with AMR. ‘People have forgotten about air and are happy to leave it to M&E contractors. The Victorians would never have done that – they were terrified of bad air.’

Short says traditional Nightingale wards, with cross-ventilation, are among the most resilient NHS buildings. He co-managed the £50m NHS Energy Efficiency Fund in 2015 with Professor Peter Guthrie, and calls on trusts to consider improvements to building fabric in the next funding round.

Short is collaborating with the Royal College of Surgeons in a study on airborne pathogens, in order to reduce hospital infection. ‘Surprisingly, little is known about how pathogens of different mass travel in air,’ says Short, who wants to create a safe space for surgery in low-income regions. In the research team is a PhD student who is researching the Connaught Hospital, in Freetown, Sierra Leone, which was at the epicentre of the Ebola epidemic.