Foster + Partners is one of the most prolific architectural practices and, over the past eight years or so, has quietly extended its design capabilities to become a fully multidisciplinary powerhouse.

Piers Heath – who founded PHA Consult in 2005 with his then colleague Edward Garrod – joined Foster + Partners as a senior partner and head of environmental engineering. His team is now around 75-strong and offers a full gamut of services, including mechanical, electrical, public health and fire-protection engineering. This is enhanced by a very strong team of experts covering environmental sciences and sustainability, and architectural lighting – all of which are a passion for Heath.

The environmental engineering team plays a central part in ensuring Foster + Partners moves towards its commitments to reduce energy and resource use. For example, Heath is looking at how soft landings and post-occupancy evaluation can be incorporated into future contracts. The practice’s position as a global architect gives it great leverage over clients based beyond the UK. 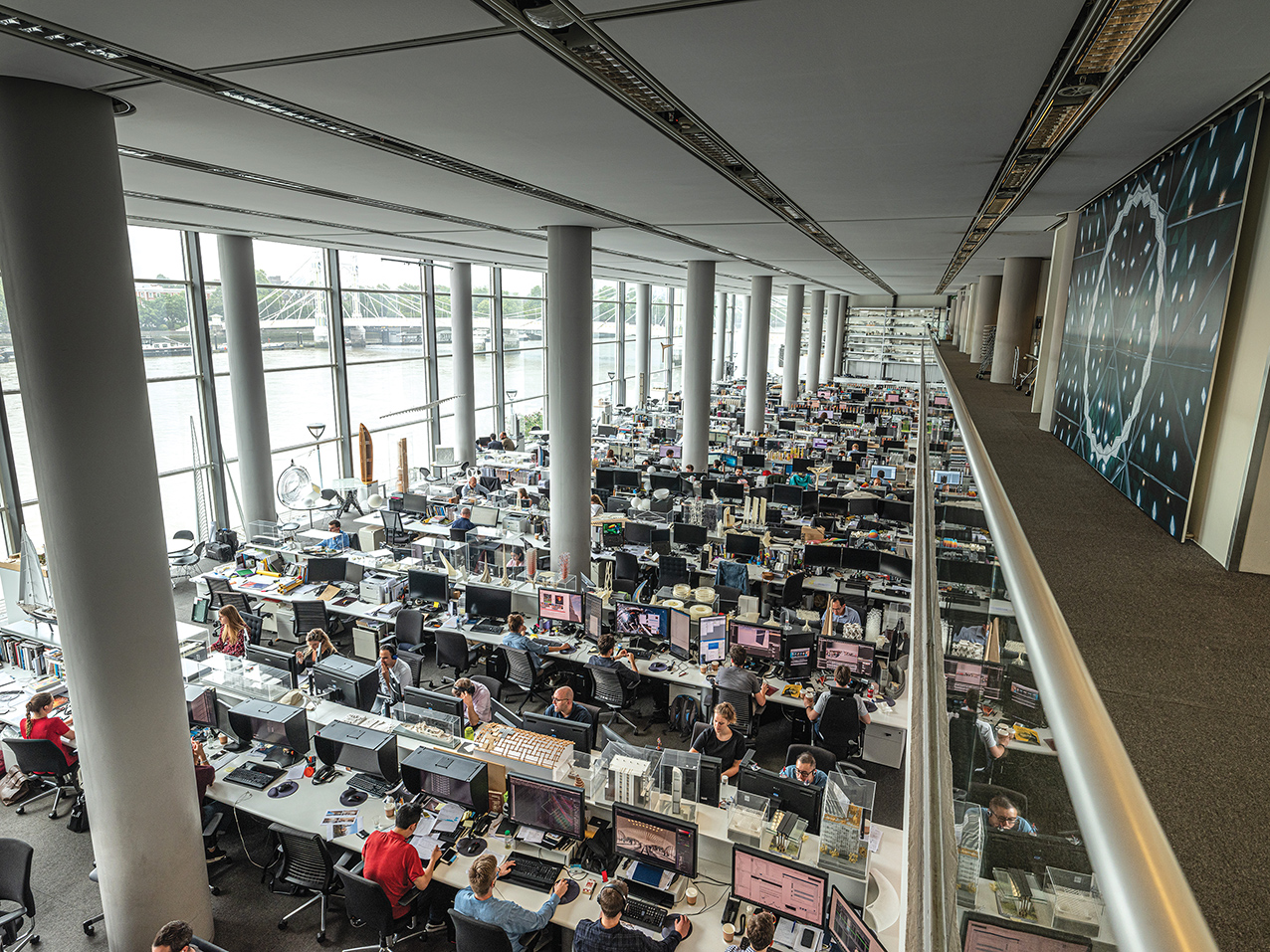 Foster + Partners has signed the World Green Building Council’s net-zero carbon buildings commitment to make the operation of all its buildings carbon neutral by 2030. It is also a signatory of Architects Declare and Structural and Building Services Engineers Declare, which pledge to design buildings with a more positive impact on the environment.

PHA’s full integration came after a long courtship, as Heath explains. ‘Foster + Partners’ interest in broadening its capability and gaining a greater understanding of environmental sciences – including passive design elements such as shading, natural ventilation, thermal mass, and so on – had been a driving force for many years. However, it took some time before their interests extended to a full in-house engineering offer.’

Heath first spoke to Norman Foster in 2008, but it took two more years and several meetings with senior figures before the practice decided it wanted to offer in-house architecture and engineering (AE). ‘When asked if PHA would be interested to participate in this venture, I was excited by the unique opportunity it presented,’ says Heath. ‘I always felt the prospect had to include MEP engineering – after all, this is arguably the most measurable aspect of a building’s performance.’

It was while he was at consultant Battle McCarthy that Heath first worked with Foster + Partners, on a competition for the redevelopment of a Renault factory outside Paris, on an island in the Seine. Heath found there was a shared philosophy around the importance of environmental engineering in design. When he formed PHA Consult, he continued to work with Foster + Partners, providing services design for projects such as Spaceport America, in New Mexico, and the Masdar Institute of Science and Technology.

‘They never saw the environmental side as a separate subject; it either influenced the form or the form facilitated the environmental objectives,’ says Heath. ‘For me, a project is successful if the first principles are reflected in the outcome. Environmental engineers shouldn’t be solving problems resulting from a lack of applying or adhering to good environmental principles.’

Foster + Partners has its own materials research centre to inform designers of the embodied energy and life-cycle of potential specifications. While it’s straightforward to understand the life-cycle of a tiling finish, however, taking a cradle-to-cradle approach to installed services is more difficult, says Heath.

‘When you dive into the specs of air handling units, fan coil units or cooling plant, it’s hard to get to grips with. There’s not much disclosed and there are a lot of components that come from far afield. Significant effort is going into gaining a better understanding of the life-cycle impact of our design decisions.’

Trying to measure embodied energy is complicated by the energy used in shipping materials from different parts of the world and varying work practices, he adds.

Norman Foster and the design board at Foster + Partners are strong supporters of sustainable design and actively respond to good environmental advice, adds Heath, who is impressed by Norman Foster’s keenness to interpret and integrate engineering principles within design concepts. ‘He will look you in the eye and ask: “What would you do with this?” – which is an inspiring challenge to our engineers; it really puts you on point.’

The increasing scale of Foster + Partners’ projects was a factor in the practice taking on engineering and forming an integrated in-house offer. ‘The ability to adapt quickly to change – and being part of the design reviews – is a huge advantage,’ says Heath. ‘You can provide advice immediately.’

While first principles may be adopted in design, engineers soon understand that it is the architect leading design for the project overall – albeit through an inherently collaborative process. ‘You need to be flexible and adaptable around the challenges architects face,’ says Heath. ‘Too often, engineers sit there thinking architects don’t understand us, but you’ve got to understand them first – and, if you do that, they’ll quickly respect and respond to your needs.’ 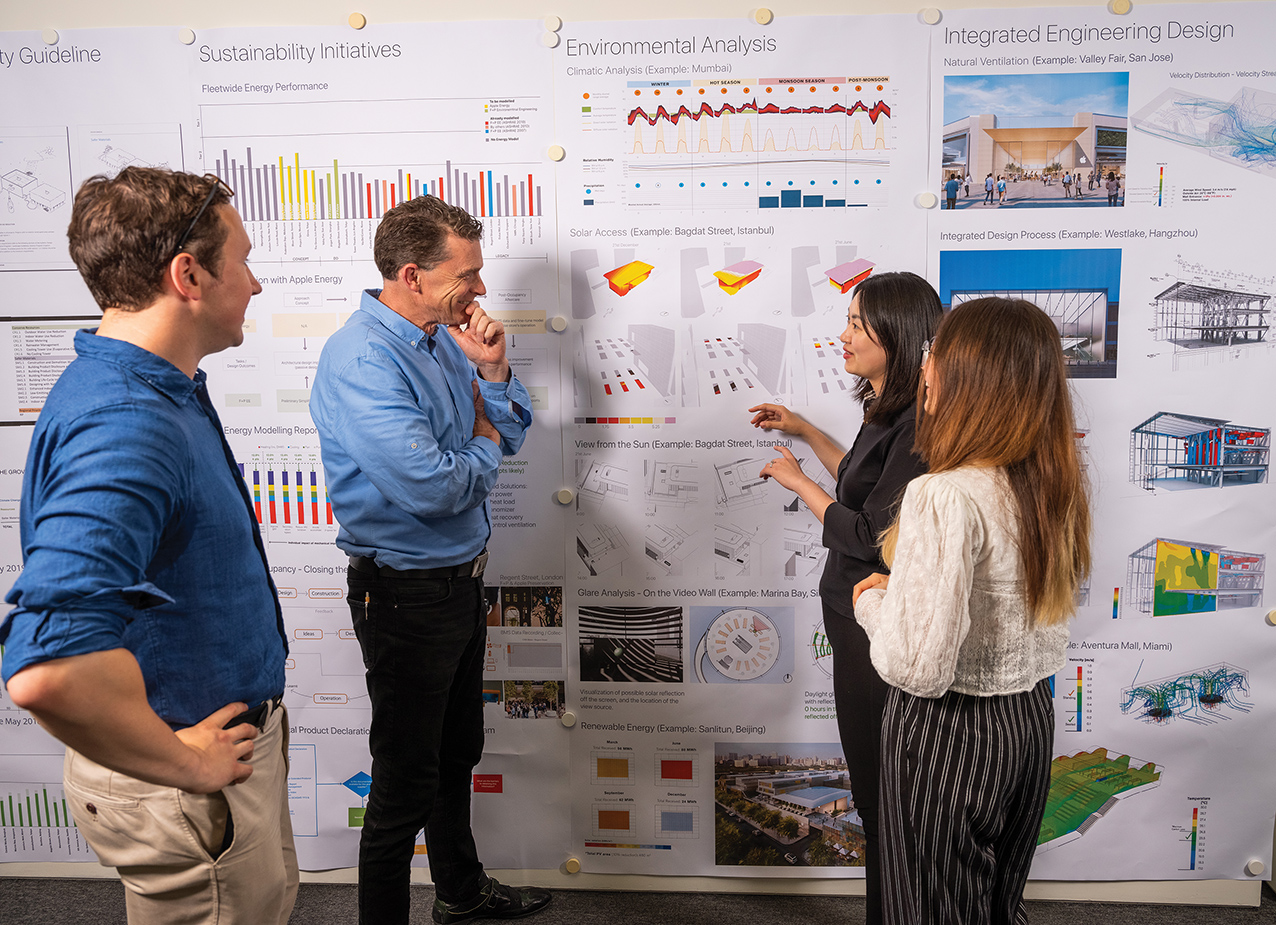 Members of the environmental engineering team

The attention to detail required to work within Foster + Partners – including servicing projects for clients such as Apple – can be challenging for some. ‘If they don’t want to see diffusers, you can’t just pull a solution out of a manufacturers’ catalogue,’ Heath says. ‘Instead, an integrated study is undertaken to find a suitable bespoke design.

‘For large and/or complex projects, we tend to co-locate the engineering teams within the larger project teams. While this is a positive and inevitable benefit of integrated design, it’s not without its challenges. We use regular engineering team meetings to maintain and build a strong, well-communicated culture.’

Heath’s team is refreshingly diverse. The proportion of female engineers is around 40%, rising to 50% on the environmental science team. ‘Diversity is really important and I’m passionate about it,’ says Heath. ‘It’s a shame that [environmental engineering] has, historically, been such a male-dominated area. Perhaps it’s not championed enough at schools. I like to encourage women in engineering because it helps us to see things from a broader perspective – we get different solutions. For the same reason, I encourage a wide range of ages and experience.’

When Heath set up PHA, he asked Ed Garrod, 18 years his junior, to join him. ‘I wanted someone young and dynamic, who understood the latest thinking and was motivated by design. I didn’t want someone blinkered by what you can and can’t achieve,’ he says. Garrod was one of the first to champion the wellbeing agenda, adds Heath, on projects such as the Samson Pavilion at Case Western Reserve University, and Cleveland Clinic, in Ohio.

Now, says Heath, clients all over the world incorporate this as a specific requirement in their request for proposals. ‘We are currently designing an HQ for China Merchants Bank in Shenzhen, and wellbeing is at the core of the brief. For example, they want operable windows – even though the climate rarely favours such a strategy – because they want staff to have connectivity with the outdoors and the psychological wellbeing that offers.’ 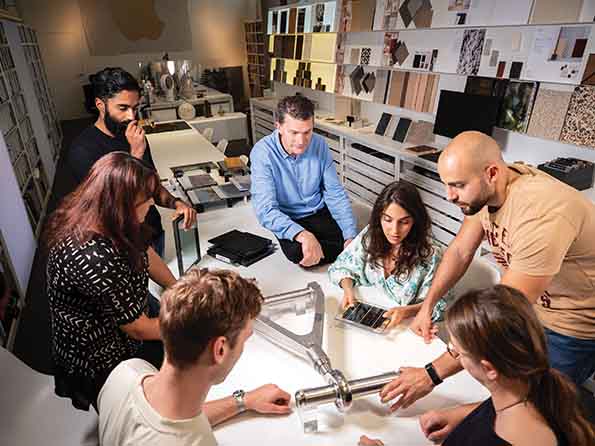 Piers Heath with colleagues in the materials library at Foster + Partners

All the engineering services design is done from London, where engineers have access to the resources at Foster + Partners’ Battersea campus. Here, there is a large materials library and numerous prototyping tools, such as 3D printers and CNC laser cutters.

The international dimension to Foster + Partners work means it frequently deals with local engineers and designers. Often, projects involve only 50% design service, which makes it challenging to ensure the design intent is realised in the operation of the building.

‘We may not have ultimate responsibility, but we want to be sure that what is built, commissioned and put into operation is as the design intent,’ says Heath. ‘You can’t walk away once a building is complete and working. We ask ourselves how the buildings will last, and whether they are adaptable, climate-change tolerant and good to use.’

A soft landings mechanism being developed by Heath for use in project agreements sits under Stage 7 of the RIBA Plan of Works and will include design reviews and post-occupancy evaluations (POEs). MEP engineers have always been sensitive around POE, he says, because performance gaps imply they haven’t delivered what they promised. ‘We have to be bigger than that and, if we have to face the music, so be it,’ he adds. 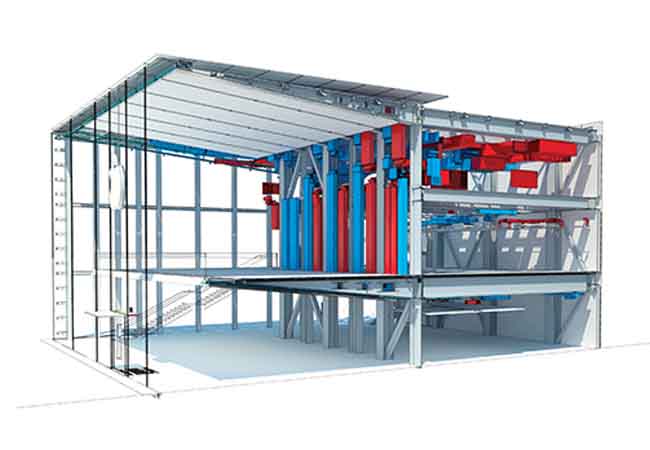 Structure integrated with HVAC services and lighting at an Apple Store in Hangzhou, China

There are ongoing discussions within the practice about how to offer this for up to three years after completion, which would align with the Well Standard. Bill Bordass and the Probe studies (1995-99, and published in the forerunner to CIBSE Journal) left a lasting impression on Heath. ‘I was fascinated by the difference between predictive and active. It gave me a better understanding of what a significant role dynamic modelling has on a building’s life.’ (See panel ‘Digital design’.)

He is aware of Foster + Partners’ unique position to influence clients to choose a more sustainable approach to buildings and systems, and says glazing technology is reaching its limit of practical environmental performance. ‘There is a greater burden of responsibility on how liberally we use [glass]. We need to be more considered, placing emphasis on exposure and orientation while delivering views and light,’ he says.

Environmental engineering will have an increasingly prominent role as society responds to the climate emergency, says Heath, who tracks its growing influence from the 1990s, when the effects of CO2 on global warming entered public consciousness. Current awareness among the younger generation is now really driving the agenda, he adds. ‘They are pushing society to ask more questions. There’s no way we can go back. The world’s woken up to the challenge, at last.’

The vast computational power now at the disposal of designers makes it possible to model much more realistic performance scenarios than Heath was able to with the ‘hellishly inaccurate tools’ he used earlier in his career. However, accurate modelling still depends on designers’ understanding of buildings in use and the human factor, he adds.

Foster + Partners is turning its buildings into a test bed for digital technology to better understand how buildings can be more attuned to end users’ needs. It is installing advanced controls and sensors, and incorporating mixed-mode ventilation, to see if it can turn back systems and save energy.

AI will reduce laborious tasks, says Heath, but he worries that commoditisation may take engineers away from the design interface. ‘Design should be about thinking and collaboration with the help of quality tools.’