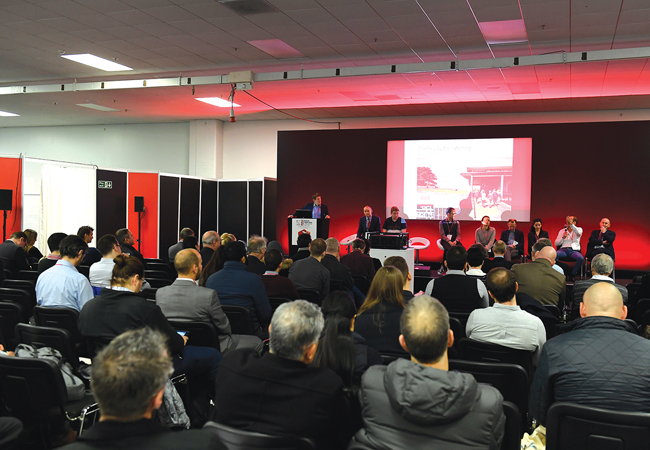 CIBSE’s Groups and Societies took centre stage at Build2Perform Live in November. The two-day conference and exhibition featured more than 30 sessions hosted by CIBSE groups and divisions, including one on pollution in urban areas by the new task group on air quality. The variety and depth of knowledge on display indicated the current complexity of the construction industry, as firms and organisations consider how they will meet the government’s challenge of building safe, zero carbon buildings by 2030. The destination is set, but how we get there is still unclear.

The inaugural Building Simulation Group Prize was presented to Chapman BDSP. Judges were impressed by the engineer’s model for the Shenzhen World Exhibition Conference Centre in China and the way it presented results graphically to overcome language barriers.

Build2Perform also included a well attended exhibition and two CPD theatres, featuring 17 presentations on subjects that varied from the circular economy and heat interface units to façade illumination and pressurisation in smoke control.

Updates on regulatory changes and the impact they have on building services design are always an important feature of CIBSE conferences. This year, delegates learned that the government is committed to including overheating in the upcoming consultation on Approved Document L, the building regulation governing energy efficiency.

The document will be published in the spring, according to Peter Rankin, Ministry of Housing Communities and Local Government principal building services engineer, who said another document – laying out possible future pathways for Approved Document L and F (Ventilation) – would also be published.

Decarbonisation of the grid and lower carbon factors for electricity mean the industry is looking hard at gas alternatives, so the future of heat was widely discussed. 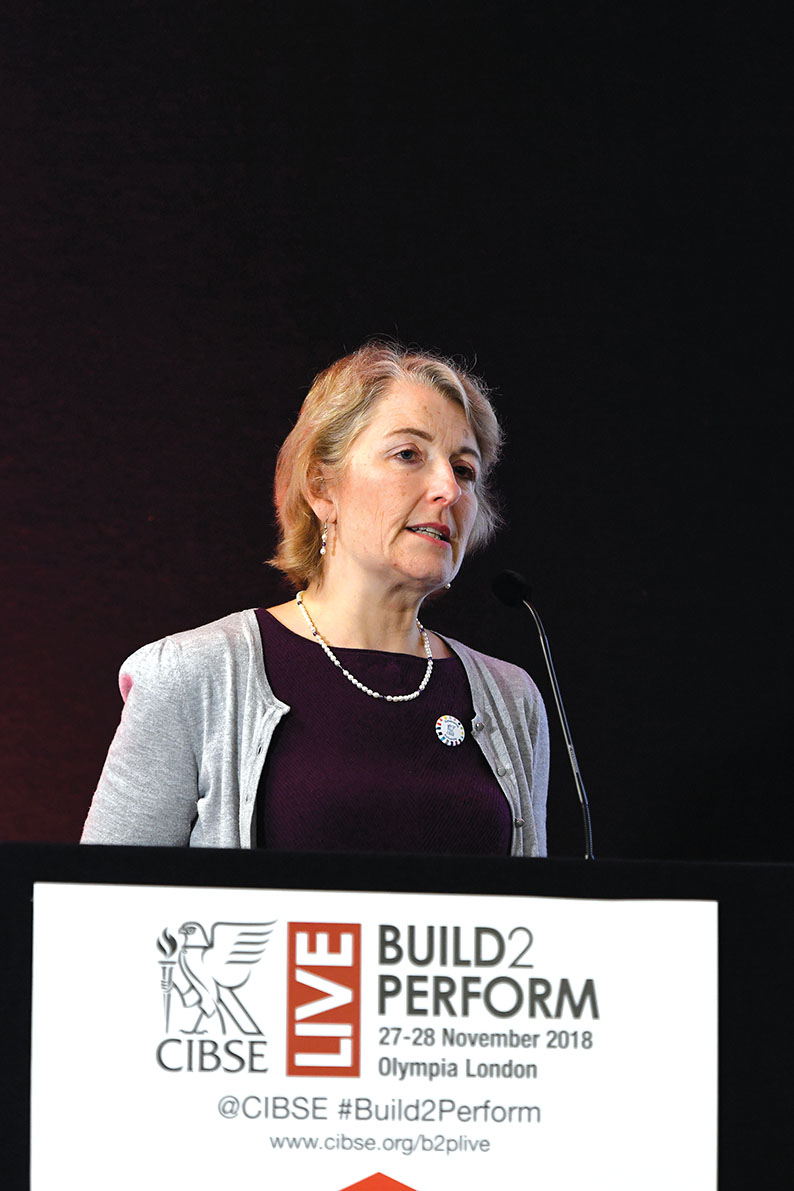 Dr Jennifer Schooling, director at the University of Cambridge Centre for Smart Infrastructure and Construction

Heat pumps are now a viable option, but Paul Ashford and Huw Blackwell, from the Anthesis Group, warned that designers need to consider the impact of new refrigerants in the specification of heat pumps. Clients, they said, need to be made aware of the risks of creating stranded assets when purchasing this equipment. ‘There is currently no single, clear alternative approach, with refrigeration equipment manufacturers in a state of flux as they change their commercial line-up to reflect the changing market and its associated costs,’ said Blackwell.

New solutions have other constraints and risks that must be accounted for, he added. For example, where ‘mildly flammable’ refrigerants – such as R32 – are installed, clients may need to do explosive risk assessments under the Dangerous Substances and Explosive Atmospheres Regulations (DSEAR), even though the refrigerants are technically still HFC-based.

It could spell the end for gas-based VRV/VRF approaches, said Blackwell, because of their higher refrigerant volume requirements. Instead, there could be an increase in low-temperature, water-based heat energy distribution between small heat pump units.

The presenters in the session on hydrogen explained that its role in the future will be, primarily, to store and carry energy. Hydrogen does not exist on Earth as a gas, so must be manufactured. It is commonly produced from natural gas, but – in future – is likely to be made using electrolysis. This involves passing an electric current through water to separate it into its basic elements – hydrogen and oxygen. Currently an expensive process, it is expected to become cheaper and to use electricity from renewable sources. 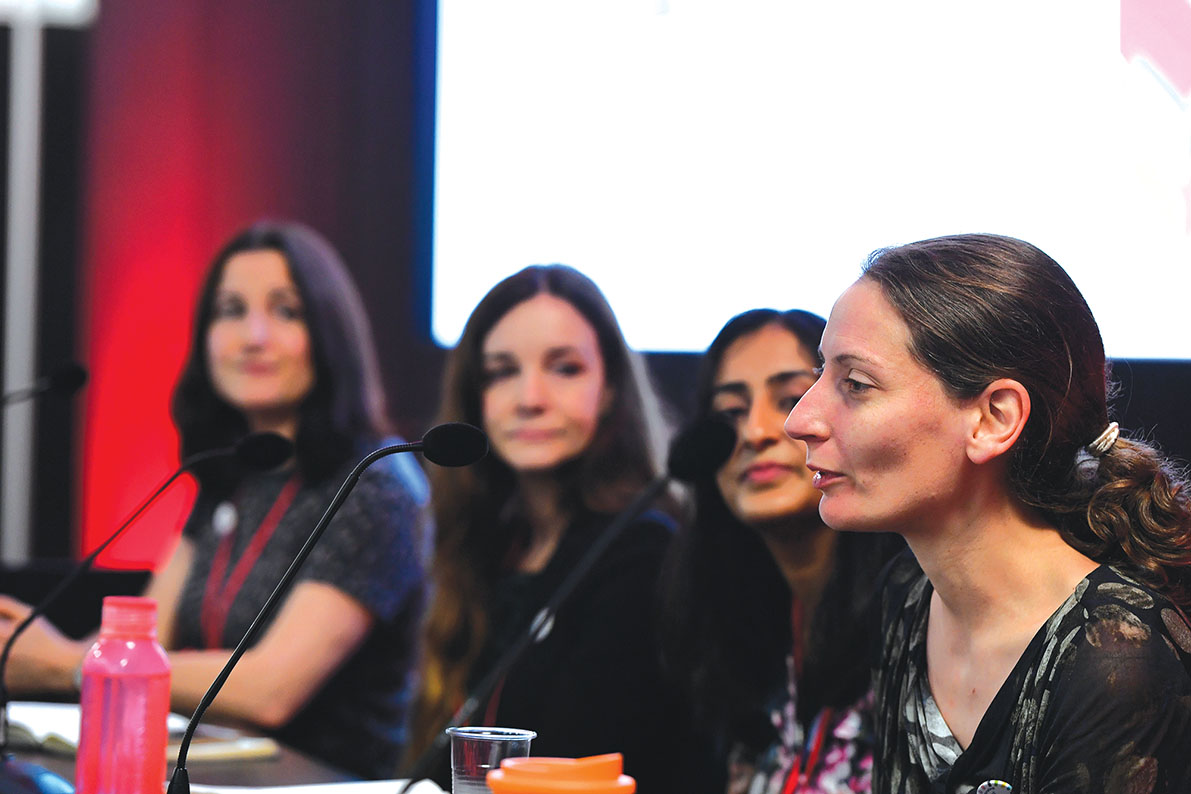 Stephen Carr, of the University of South Wales, explained that the advantage of hydrogen is that it could use the existing gas grid for distribution and storage. He expects hydrogen to be used, mainly, to store energy in summer for use in winter. Fuel cells will then convert the chemical energy in the stored hydrogen to electricity, with pure water and heat as the only by-products.

In a session titled Manufacture2Perform, the Bartlett’s Dr Eleni Papadonikolaki spoke developing people and businesses to meet the future of the built environment. A cultural shift is required alongside the digital one, she said, and industry needs to be prepared for ‘business as unusual’ – and be aware that external players could be major disruptors if the industry isn’t proactive.

Dale Perini, of Bryden Wood, highlighted the need to focus on design for manufacture and assembly, to take on the construction challenge set by the UK government. Use of platforms can reduce risk and overheads, he said, by – for example – splitting workflows across multiple sites for standardised construction components. 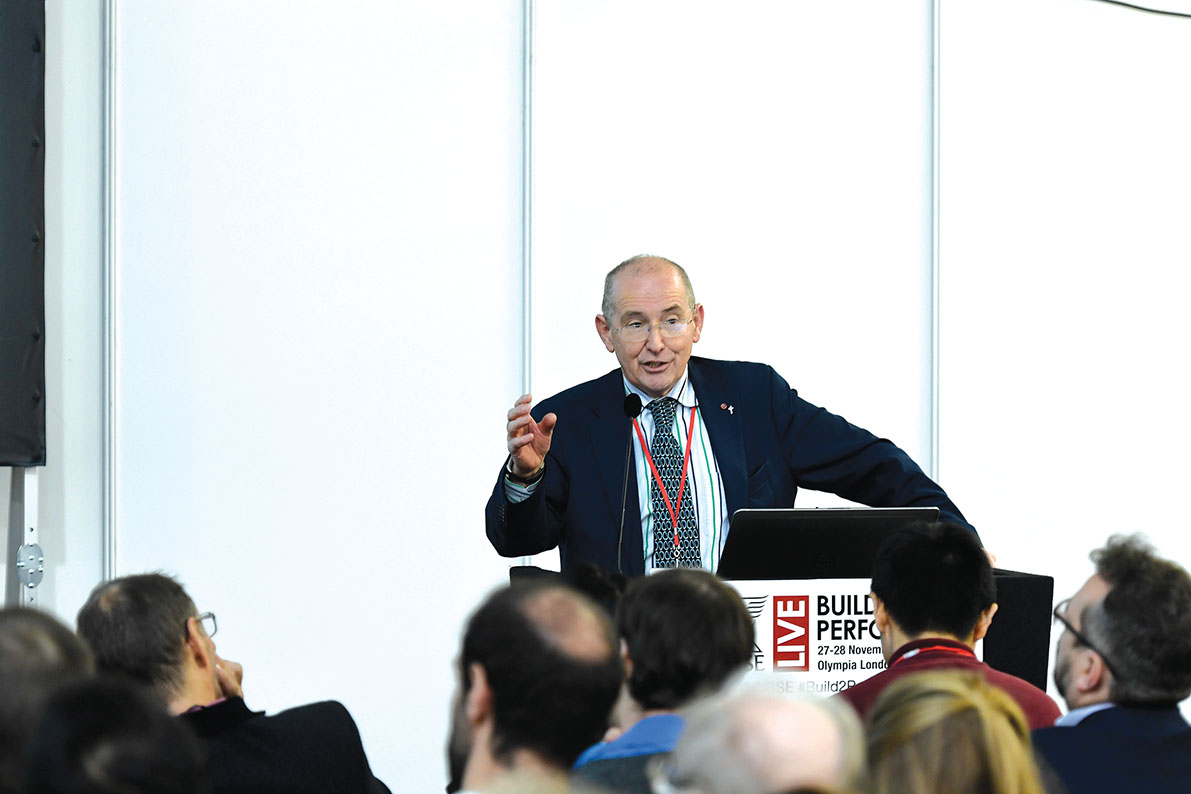 The Society of Public Health Engineers hosted a seminar on water and flood management in cities. It covered the Loading Unit Normalisation Assessment (LUNA) project – a new framework for sizing domestic hot and cold water systems for residential buildings. Its aim is to reduce oversizing of services and so minimise cost, space and resource wastage.

Ed Barsley, from The Environmental Design Studio, spoke about resilience in urban living, detailing projects such as: Flood Narratives, which creates tools for the communication of flood risk; Retrofitting Resilience, a methodology to assess flood risk of existing communities; and the Home for All Seasons design, which aims to provide protection in extreme weather conditions.

You are more likely to be a partner in a UK engineering firm if you are called Andrew than if you are female. That was one of the observations made by a panel of women in high-profile engineering roles as they discussed how their industry could attract people from more diverse backgrounds.

■ Diversity is critical to being competitive. By not encouraging talent from a wide range of backgrounds, industry risks creating buildings that do not serve all customers

■ Encouraging people to be themselves makes them better engineers. More time should be spent promoting creative problem-solving rather than molding people into outdated workplace cultures

■ There must be people in senior positions with whom people can identify and aspire to be like. ‘You cannot be what you cannot see’

■ It is essential to recognise subtle prejudice that is socially engrained, and understand that this is unacceptable. For example, derogatory ‘wife’ jokes or gendered language, such as ‘chairman’.

The CIBSE Air Quality task group, chaired by Cundall’s Ed Wealand, was launched at Build2Perform. Its focus is on advocating regulatory improvements, offering guidance on monitoring and sharing knowledge.

Kathryn Woolley, an air quality consultant at SLR Consulting, offered tips to building services engineers, including keeping a store of good plant, increasing ventilation rates, and relocating – or increasing – the height of ventilation intakes. She also told specifiers to be aware of the wide variation in NOx levels generated by different gas-fired boilers.

Ruth Calderwood, air quality manager at the City of London, said the borough had done an audit of very large combined heat and power in the Square Mile, to identify the source of NOx. They were looking to move to non-combustible forms of energy generation, and Calderwood said 75% of the air pollution in the City came from outside London.

At a session on the renovation of non-domestic stock, chair Professor David Fisk asked panel members what they would do to make retrofit happen. They replied: make sure people understand buildings better; urge building managers to engage with BMS properly; and make retrofit part of all built environment courses and qualifications. 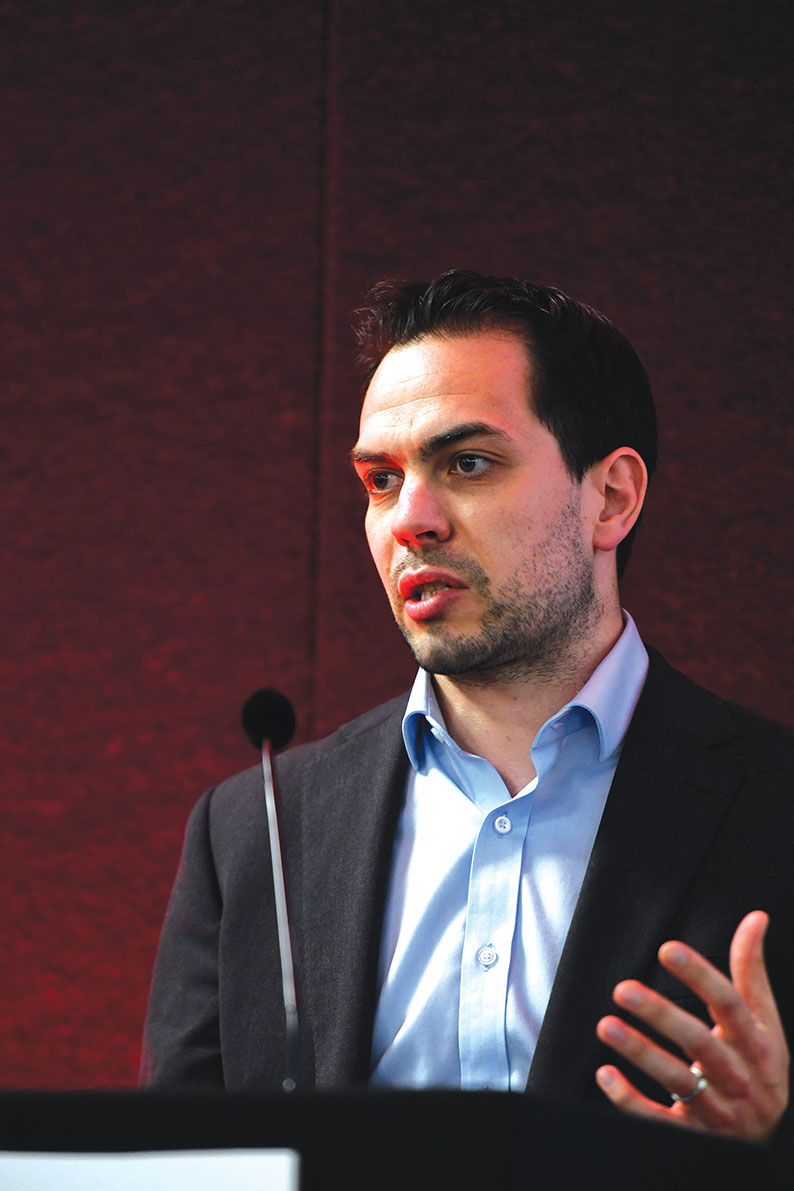 David Pierpoint, chief executive at The Retrofit Academy, said a lack of training had resulted in disastrous refurbishments that had helped kill off the Green Deal. ‘It was a very good thing, in retrospect, that the Green Deal didn’t deliver a market at scale, because we clearly weren’t ready for it,’ he said.

Pierpoint gave examples of projects where retrofits had led to widescale damp problems because the focus had been on insulation at the expense of ventilation. He described the role of the retrofit coordinator recommended in the Each Home Counts review. Under a new retrofit standard, PAS2035, domestic projects funded through the Energy Company Obligation will require a retrofit coordinator. Pierpoint said The Retrofit Academy and the Construction Industry Training Board have developed a Level 5 diploma course in retrofit coordination and risk management.

In a session on building performance, Verco’s Tom Randall said he had compared a range of clients’ predicted and actual building energy use, and found no correlation. There is more pressure now on services engineers to design buildings that perform as predicted, he added, because of energy disclosure initiatives such as Nabers and more credits for energy reporting in Breeam. The implications for engineers were: more modelling, better commissioning and a focus on the usability of buildings. ‘The client will get better sized plant and a more efficient building that will dwarf the extra cost of modelling,’ said Randall. 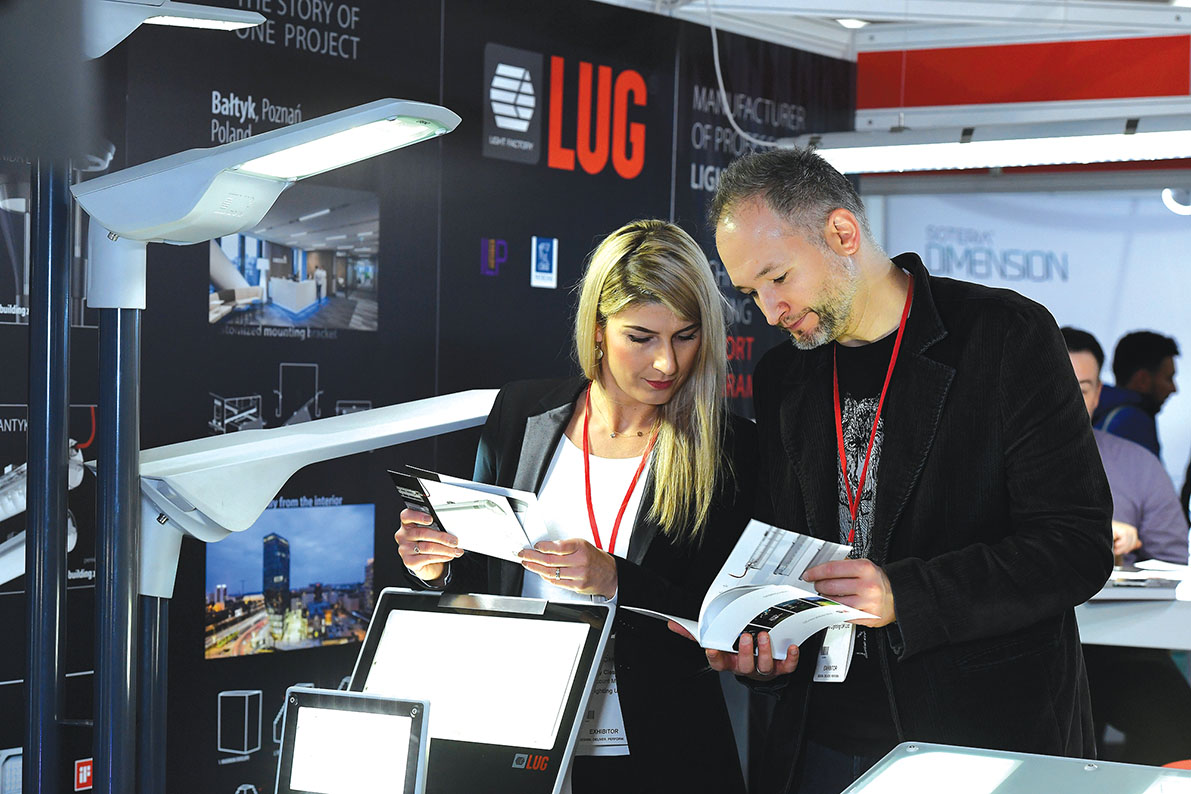 In the same session, the Building Controls Industry Association president, Jon Belfield, said someone had to own the process for controls to be integrated and commissioned correctly. ‘Unless there is an overarching master systems integrator, [electrical and mechanical] systems are unlikely to connect as required,’ he added.

Ze Nunes, of Mach Acoustics, said acoustic modelling had to be considered alongside thermal modelling. He added that there was more data around the acoustic performance of window types, which will allow designers to select components with noise control.

Comments from the floor summed up the challenges consultants face in balancing thermal and acoustic comfort. One said clients do not pay attention to noise, as it is not a requirement in planning or regulations. So the question is, how far can this complex industry travel towards a safer, more comfortable, zero carbon world without government intervening to ensure standards are met?

In the historic buildings session, Caroline Cattini, senior engineer and energy manager at Historic England, explained how the public body is working with Professor Ian Knight at Cardiff University’s Welsh School of Architecture to benchmark the energy use of some buildings for which it is responsible.

Any building dating from before 1919 is classed as historic, and Historic England wants to reduce its resource use and spend, as well as to understand where it uses energy.

Knight’s findings mean ventilation, thermal mass, occupancy, internal conditions and the control of building services are all much more important in defining the energy use of a historic building than the energy efficiency of the building fabric.

‘It is quite reasonable for a building to be efficient in some aspects but not others… it may be that a historic building with tall windows has a low lighting load, which may help offset some of the heating demand – which may be why some of the overall [energy consumption] figures are low.’

Knight’s conclusion was that, if you are looking at energy consumption in kWh/m2, then historic buildings are no less efficient than modern designs.

As an aside, Knight said the same findings are true for school buildings. He is currently monitoring 250 schools and said that the new ones currently use 50-100% more energy per square metre for heating than the Victorian schools. ‘The bottom line is that these findings have big implications for how we address the role of building fabric in moving the whole of the built environment towards low or zero emissions in the future’.