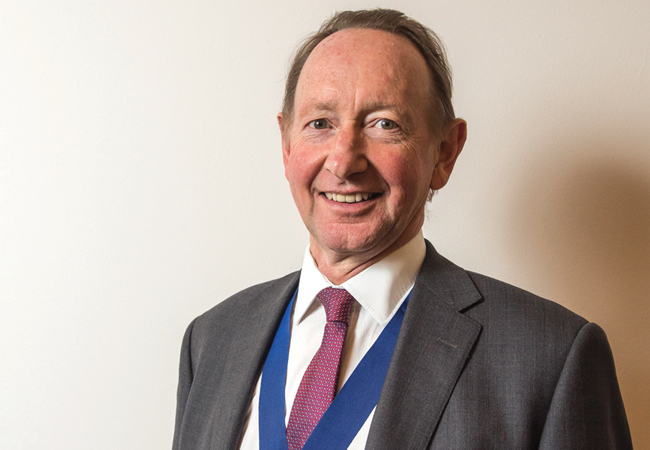 ‘CIBSE is no longer just about the plantroom and thermostatic valves,’ says CIBSE President John Field FCIBSE. ‘We’ve got to take on wider issues, such as reduction of resource use and air quality.’

Field was speaking shortly after his presidential address at the Royal Society, where he told the audience that CIBSE had an opportunity to communicate well beyond its core building services audience. He said CIBSE was a growing institution, and that the expertise of its members was becoming increasingly important to building occupiers as their focus broadened from energy efficiency to factors affecting comfort, such as indoor air quality and good lighting.

According to Field, CIBSE was ‘at the heart of buildings’ in terms of design, construction and maintenance, and – in a memorable conclusion to his address – he described building services engineers as being ‘at the centre of life’ and in a prime position to make a real difference to billions of people’s lives.

Field spelled out his vision for the Institution: CIBSE should build on its knowledge base and members’ expertise to increase its influence for the public good. At the core of his speech was a call for engineers and CIBSE to inspire those around them.

A vibrant and relevant network of groups, regions and societies is vital to attract younger engineers to CIBSE

Field is an urbane man, and eloquent speaker, who describes with clarity the issues affecting building services and the wider environment. He believes engineers have to learn to speak the language of the client, and minimise tech-speak when communicating with non-engineers.

He says CIBSE should raise its profile across the industry and broadcast its expertise to companies, regions, politicians, legislators and students. ‘We spend our whole time in buildings, and services engineers make it work. People don’t realise that,’ says Field.

‘There is a great opportunity for engineers to raise their profile. We have got influence, but we could be inspirational. We’ve got to speak up.’

Field says CIBSE has to ‘make a noise’ about issues that interest people, and be seen ‘to be taking a stand’ on matters such as indoor air quality.’ It is also important to communicate how rewarding and inspiring the industry is, in order to attract new talent.

Field was drawn to it from the nuclear industry because building services was ‘buzzy and lively’, and he could see opportunity to be ‘idealist’ and work in a profession that was beneficial to the environment. One cutting-edge, low-energy project that Field became involved in was the Ideal Home solar house in 1981 – a groundbreaking building that he helped design and commission.

Field is still at the forefront of energy efficiency, in the area of energy performance contracting (EnPC). This has the potential to force project teams to collaborate more closely, to deliver guaranteed building performance – but it is a fiendishly complex form of contract. Field is one of the industry’s foremost experts and is chair of the Energy Performance Contract Group at the Energy Systems and Technology Association. He drew up the energy performance clauses for the major services upgrade at Rampton Hospital in Northamptonshire, which involved a new energy centre and heat network upgrades. Without his financial, project and design engineering skills, the work would probably not have got off the ground. Field believes EnPCs are a great way forward, but says the industry needs to be simplified before it really takes off – it ‘hasn’t yet had an iPad moment’.

According to the new President, communicating its expertise and enthusiasm with its own membership is another priority for CIBSE. He has pledged to work closely with the Institution’s regions, groups and societies, and to do a tour of the regions. ‘They are the heart of the Institution and a lot of members only see CIBSE through them,’ he says. ‘The groups are often where the technical aspects of the Institution are crystallised and where real progress is made.’ Field believes a vibrant and relevant network of groups, regions and societies is vital to attracting younger engineers to CIBSE.

He is also keen to make CIBSE more inclusive. In his address, Field highlighted a Victorian photograph of members of CIBSE’s predecessor, the Institution of Heating and Ventilation Engineers. He noted that the men in the picture all looked the same – even down to the shape of their moustaches – and said that a similar picture of CIBSE now, 120 years later, would not be much more diverse. ‘We need to move it on,’ says Field, who is delighted that Lynne Jack FCIBSE has joined the CIBSE board – but he believes a greater representation of women is needed.

The next year promises to be an exciting one as Field attempts to push the Institution further into the limelight. ‘CIBSE should have more of a presence around debates on the built environment,’ he says. ‘We need to show how we are making a difference.’

John Field is founding director of energy management consultancy Native-Hue, and has been at the heart of UK energy management developments for 30 years, having founded Target Energy Services in 1985. He joined Power Efficiency as a director in 2007 and built up an energy and carbon management team that moved, with Power Efficiency, to Balfour Beatty in 2011. As energy services director at TEAM (EAA Ltd) from 2012 to 2014, Field developed the renewable heat business and supported major energy performance contract projects for large-scale energy improvements at hospital trusts. He is chair of the Energy Performance Contract Group at the Energy Systems and Technology Association.