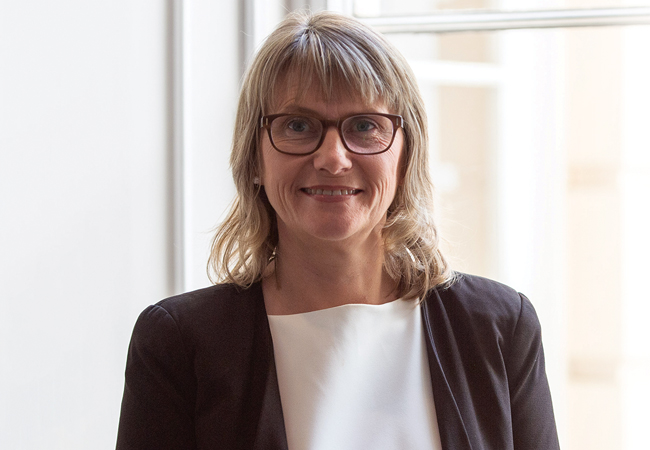 CIBSE’s new President, Professor Lynne Jack FCIBSE FSoPHE, is a vastly experienced public health expert, whose research led to her being awarded the CIBSE Napier Shaw medal. She co-founded CIBSE’s Inclusivity Panel and the Scottish region of the Society of Public Health Engineers (SoPHE), and is currently director of research at Heriot-Watt University’s Malaysia campus, having spent 24 years at its Edinburgh site.

Jack also happens to be the first female president in the 122-year history of CIBSE. For the Institution, it is a momentous moment, and a powerful signal that women can succeed in what has traditionally been a male-dominated industry.

Its significance is not lost on Jack, who says she has been sent many messages saying how fantastic it is that CIBSE now has a female President. ‘As a woman, you have to be visible. It’s really important to raise awareness that having a female president should now be the norm, but you also have to know you are being asked to do things because of your own merits and achievements,’ says Jack.

‘That’s important to me, and to many of my female colleagues. First and foremost, I want to be known as the incoming President of CIBSE, and then as the Institution’s first female President.’

In her presidential address, Jack was able to share positive news about the increasing number of female CIBSE Members. She said there had been a 4% increase in the past seven years, and pointed out that 23% of graduate members – and 22% of student members –are now female.

Jack was very keen to point out that diversity is not just about improving male/female ratios. ‘It’s much wider than that. There’s clearly work to be done on gender, but it’s not the only characteristic that the CIBSE inclusivity panel is looking at.’

She is keen to ensure that diversity and inclusivity are part of CIBSE’s make-up. ‘They should not be a separate stand-alone strand,’ Jack says, ‘but should be embedded in the pillars of CIBSE’s strategy – namely, membership, knowledge, building performance, voice and engagement.’ Attracting a new generation of engineers from diverse backgrounds will be key to closing the industry skill’s gap, she adds.

In her address, Jack outlined that the UK will face a major shortfall in engineers at CEng, IEng and Technician levels by 2023, as the median age of engineers rises.

‘We are struggling to attract school-leavers to building services engineering but, the fact there are now more female engineers, means we are doing something right,’ she says. ‘We know what engineers can achieve, and how rewarding it is as a career, but finding ways of conveying that to young people is crucial.’

Jack praises the #IamCIBSE social media campaign as a big step in the right direction. ‘The positive comments engineers have jotted down have been completely inspirational. We have to convey that much more strongly.’

Her presidency comes at a pivotal moment for the building services industry, and she summed up the threats and opportunities in her presidential address, entitled Uncertainty, adaptability and agility. She told the audience that shifting global relationships and Brexit unknowns were causing uncertainty over future trade, skills recruitment and legislation. At the same time, Jack warned the threat of climate change was becoming more acute, with population growth, urbanisation, and the continued emergence of megacities making sustainable development an ongoing challenge.

She says that recent demonstrations by young people over climate change have given her cause for hope. ‘It is encouraging that so many people are now engaged in the discussion and that the government appears to be acknowledging energy and climate challenges. This can only be a good thing.

‘There is a heightened sense of awareness of climate change and the need to decarbonise buildings.’

Jack adds that CIBSE’s responses to key government documents will help guide future UK policy on moving towards a zero carbon economy. These include: the Institution’s response to the consultation on the future framework for heat in buildings; a detailed position paper on recommendations on changes to Building Regulations Part L and F; Defra’s Clean Air Strategy; and the London Plan.

In her address, Jack was keen to emphasise that buildings have to be not only comfortable and energy efficient, but also safe. The Grenfell Tower fire still casts a shadow over the construction industry, and CIBSE is closely involved in the implementation of the recommendations laid out by Dame Judith Hackitt in her Building a Safer Future report last year.

‘For me, Grenfell was a defining moment,’ says Jack. ‘It should be a moment that leads to a significant transformation in the construction sector.

‘Of course, we want to make society better, improve people’s lives, and cut carbon – but the safety of people who live and work in buildings is the core reason we do what we do. We have a moral obligation to make sure Grenfell never happens again.’

‘This has to cut across all sectors and all layers, and must include all stakeholders. It’s easier said than done, but we must deliver. From a CIBSE perspective we have an obligation to collaborate with other professional bodies. There’s a need – and already a willingness – to be open, and to share information and knowledge.’

In East Asia, where she is based, Jack has noticed a willingness to share, particularly in the digital realm. ‘There is generally a culture of data gathering, and an openness in sharing data,’ she says, and she  believes the potential of digital engineering must be realised to meet the challenges facing the industry.

‘Dame Judith talked about the importance of holding a digital record of buildings to maintain a golden thread of information – and she is absolutely correct. We have to employ new technologies and techniques to be able to deliver against her recommendations,’ Jack says.

CIBSE’s growing Society of Digital Engineering is attracting those with IT skills who want to do more to push the digital agenda, she adds. ‘There are huge opportunities in digital that will help us to do more with the big-ticket agenda items, such as decarbonisation, energy demand, environmental change and smart infrastructure.’

The society is helping CIBSE stay ahead in digital technology, but Jack believes that the big technology companies – such as Google and Apple – will inevitably enter the industry. ‘The tech giants will be able to see the opportunities in the construction sector as well as us, and the question is how we can bring those discussions together?’

Jack says the digital and engineering skills CIBSE members possess will be in great demand as society addresses climate change and the reforms required to guarantee the safety of buildings are introduced. ‘We’re at the point where we have such a big contribution to make to key societal priorities. This is a really exciting time for CIBSE,’ she says.