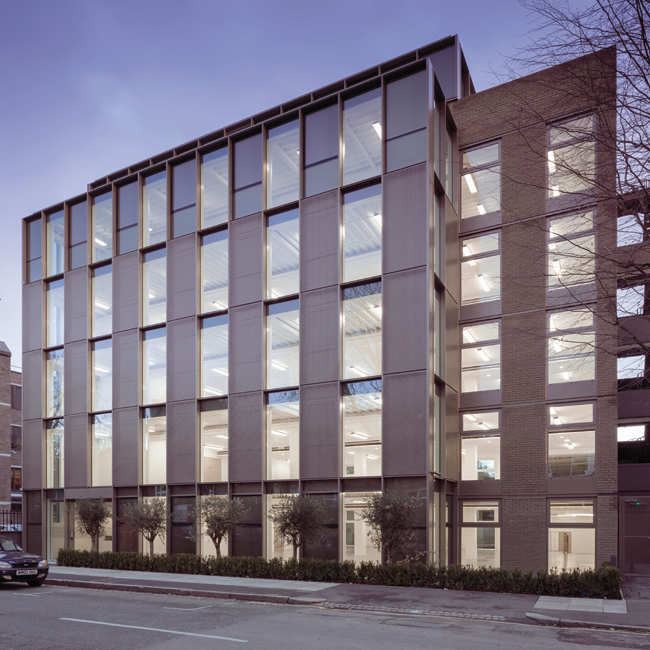 The government, in recent years, has implemented a range of regulations and incentives to cajole or bully the property industry into improving the energy performance of its commercial buildings. The Energy Savings Opportunity Scheme (ESOS) is the latest in a long line of policies designed to encourage building owners to invest in energy efficient and low carbon buildings.

Despite the legislation, the number of non-domestic properties being refurbished and operated as energy efficient buildings is low. Bruno Gardner, managing director at Low Carbon Workplace (LCW), blames this on a lack of knowledge about how to develop and operate low carbon buildings, and ‘capability gaps’ within the supply chain.

LCW was established to demonstrate that energy efficient buildings are compatible with making a profit. The partnership between the Carbon Trust, fund manager Threadneedle, and property developer Stanhope uses investors’ money to acquire and create energy efficient offices. The idea is to take down-at-heel buildings and turn them into high-value real estate, using passive design principles. 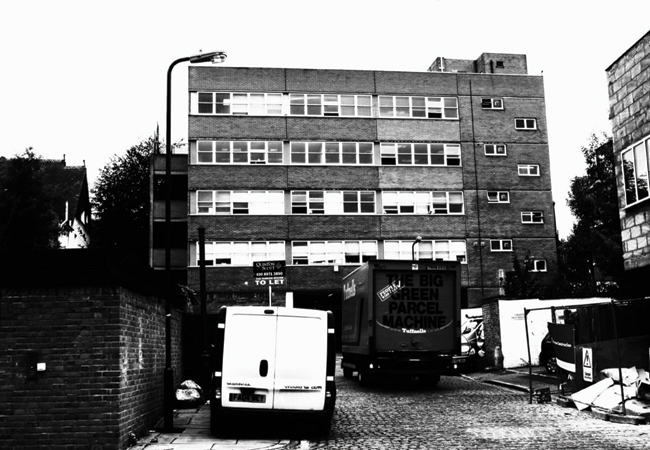 Before the refurbishment
Credit MARK HADDEN

The aim is to increase the Energy Performance Certificate (EPC) to at least a B rating and so future-proof the premises against rising energy bills and upcoming environmental regulations – such as the minimum energy performance standard, which is set to restrict the letting of buildings rated F or G from 2018. The refurbished offices should provide efficient and comfortable spaces for occupants, and an attractive investment for landlords.

Occupants are offered support from the Carbon Trust to ensure the building is operated properly. Sub-meters and occupancy sensors are used to monitor energy consumption, and building users receive monthly reports on energy use. 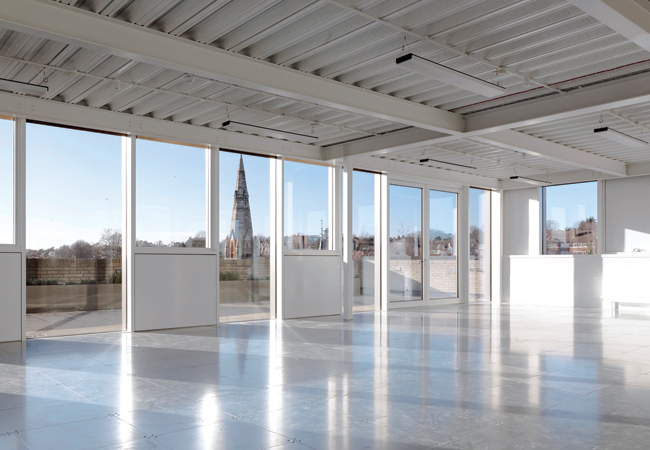 Mansel Court, in Wimbledon, is one of five offices that LCW has acquired and transformed into energy efficient properties (four others are in development). The 1970s in situ, concrete-framed office block has been extensively remodelled, at a cost of £5.4m, and there have been significant changes to the building envelope, which forms an integral part of the new building services strategy.

Architect Duggan Morris increased the lettable floor area by 60% by raising the number of storeys from four to five, and adding a rear extension where there was once a car park. Four storeys at the front of the building have also been extended three metres towards the street. Identifying ways to reconfigure buildings to increase their value is a key strategy of LCW, and helps fund investment in low-energy design. 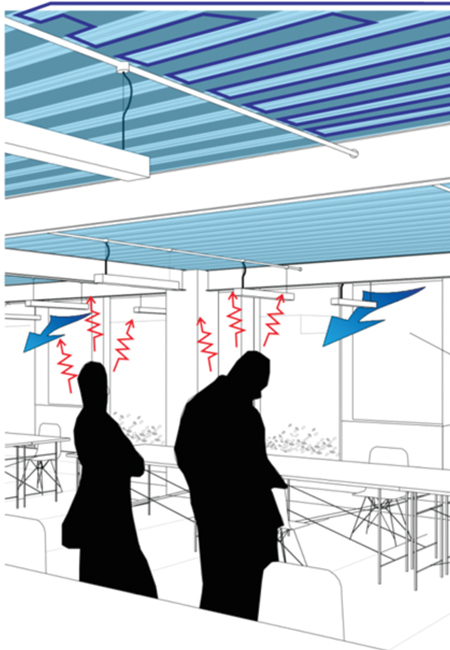 The exposed, radiant-chilled ceilings provide comfort conditions by absorbing heat given out by people and computers

Although the driving principle of LCW is passive-led design, it accepts that buildings have to be commercially viable – and, for the UK property market, that means providing tenants with air conditioning. This was the challenge for building service engineer Skelly & Couch – to design an environmental strategy that combined passive design with the requirement for mechanical cooling.

‘Rental income and the agent view is still driven by traditional air conditioning,’ says director Mark Skelly. ‘There are alternatives to traditional cooling that can be accepted by the market, but it is still hard work.’

Skelly was keen to make the most of the thermal mass of the existing 300mm concrete slab to reduce overheating and cooling loads. To control the temperature of the slab, Skelly & Couch bonded a Clina micro-capillary mat cooling system directly to the ceiling, using highly conductive plaster. The mat carries tubes of cold water from roof-top chillers and keeps the concrete soffit at a constant radiant temperature of 20°C. ‘This is a good temperature,’ says Skelly, ‘as it avoids condensation in the plaster, and means you cannot accidentally over-cool the space.’

One benefit of the capillary mat is that it can take advantage of free cooling – daytime cooling loads can be reduced by coolth stored overnight or when the external temperature falls below 18°C.

By augmenting the ceiling heights of the existing building, Skelly & Couch sought to improve air flow, daylight and psychological wellbeing

By coupling the mat directly with the soffit, Skelly & Couch was able to maximise the floor-to-ceiling heights. This improved the amount of daylight coming into the offices and improved airflow. This was key because the cooling strategy in summer depends on occupants opening panels in the façades to facilitate cross-ventilation.

‘Occupants can tolerate higher temperatures with low radiant temperatures and some air movement,’ says Skelly. ‘By augmenting the ceiling heights of the existing building, we sought to improve air flow, daylight and psychological wellbeing.’

The capillary mat is usually specified to provide heating and cooling, and is insulated to maintain water temperature. At Mansel Court, the mat is designed to cool the concrete soffit so there is no need for insulation. Skelly says using capillary tubes for heating would turn the concrete into an uncontrollable storage heater. ‘Stored heat would be wasted by tenants opening windows to cool down,’ he says. Instead, a gas-fired condensing boiler provides heat via trench heaters on the ground floor and via radiators on the floors above, where maximising room height made trench heaters inappropriate. 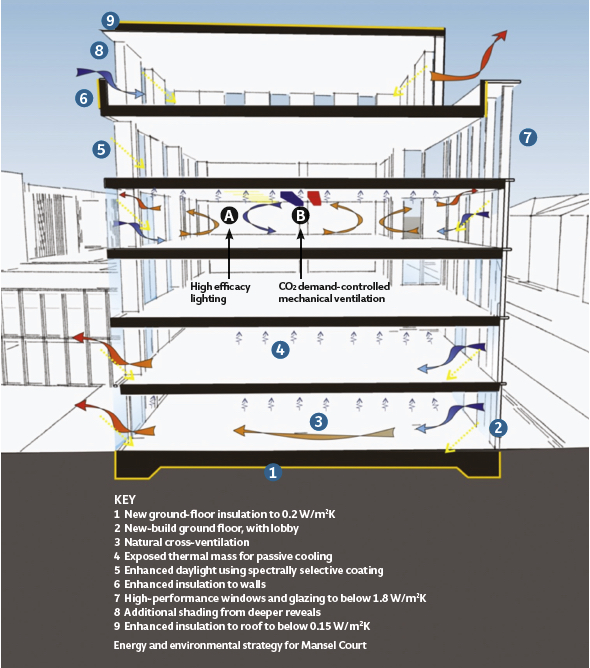 The extensions and fifth-floor ceiling do not have exposed flat concrete soffits. It was cheaper to use conventional metal ceilings, so – rather than using the cooling mats – cross-linked polyethylene (PEX) pipes were cast into concrete decks. Duggan Morris was keen to mark the extensions differently from the original building by giving them an exposed metallic finish, but Skelly persuaded the client to paint them white to help reflect natural daylight into the interior.

A key element of LCW’s strategy is to support tenants before and after they move in. Fit-out guidance is offered to ensure that the tenants’ plans do not compromise the building’s low-energy strategy. For example, at Mansel Court there are strict limits on where partitions can be positioned to ensure that ventilation is not compromised and pipes aren’t penetrated.

To enable tenants to create cellular office spaces, there are 200mm breaks in the capillary mat where partitions can be installed. This channel also allows for the fitting of lighting, control sensors, wireless access points, smoke-detector heads and anything else the tenant may want to hang from the ceiling, such as projectors.

Tenants are prohibited from enclosing the entire central floor spaces, as the deeper parts of the plan require cross-ventilation to keep summer temperatures within acceptable limits. A central ventilation spine allows a degree of partitioning in these areas.

Skelly & Couch was involved in the design of the building from an early stage, a trait common to all LCW projects. ‘Early engagement of all parties involved in a development is essential for a successful building that performs well from day one,’ says Jonathan Winston, occupier support manager at the Carbon Trust.

‘Input from building services engineers means design issues can be resolved before they become conflicts in the construction phase, or are constrained by other design decisions.’

An important input from Skelly & Couch was making sure the building was easy to use. ‘The brief was to not make the building too complicated,’ says Skelly. ‘Too much control can have a revenge effect.’

Everything was designed with a domestic level of control, he adds. For example, radiators have straightforward thermostatic valves. A central control system cools the offices, and the space can’t be over-cooled because the system is designed to cope if windows are opened. Skelly & Couch also advised LCW on the format of a user guide.

Soft landings ensures LCW has a continued involvement in the building, and lessons learned are fed into subsequent projects. ‘Experience and feedback accumulated through each development help us continually to refine our approach,’ says Winston. ‘We are looking at ways to take technology forward.’

One concept being trialled in the next development is the use of an occupancy counting system, instead of CO2 sensors, to control fresh-air ventilation rates. Winston says it should provide more robust information for the control system about how much ventilation is required. ‘The data is not subject to interference from open windows and other draughts,’ says Winston.

Occupancy sensors are used at Mansel Court, but they don’t trigger changes in heating and cooling automatically. They are simply monitored by LCW, which tweaks the systems in response to changes in occupancy patterns. 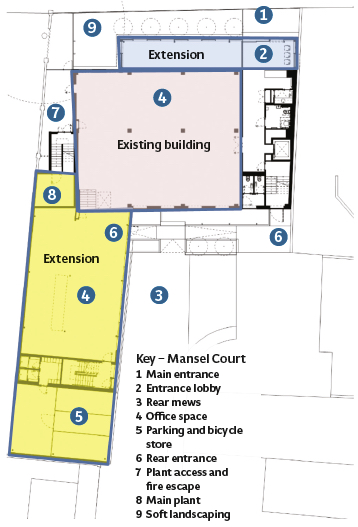 Winston argues that the LCW model is good for consultants, tenants and investors. Building services engineers are valued as a member of a fully integrated design team, and investors benefit from their expertise in creating low carbon buildings.

‘Investors can make a positive difference with their funding, while also benefiting
from attractive commercial returns,’ he
says. ‘As tenants become more aware of the many benefits of energy efficient buildings, we are starting to see evidence that they command a rental premium over
“standard” buildings.’

Monitoring since completion in December 2013 has proved that Mansel Court is performing well. It produces 56kg CO2/m2 per year, which means the building tenants are well on the way to achieving the LCW Standard. This requires occupiers to meet best-practice emissions benchmarks or to demonstrate year-on-year improvements.

If the rental values of LCW’s projects also improve, then it has demonstrated that an investment in energy efficiency – and the skills of building services engineers – is as profitable as it is sustainable. This is an important message for company directors, who are now considering the energy-saving suggestions highlighted in the audits produced as a requirement of ESOS