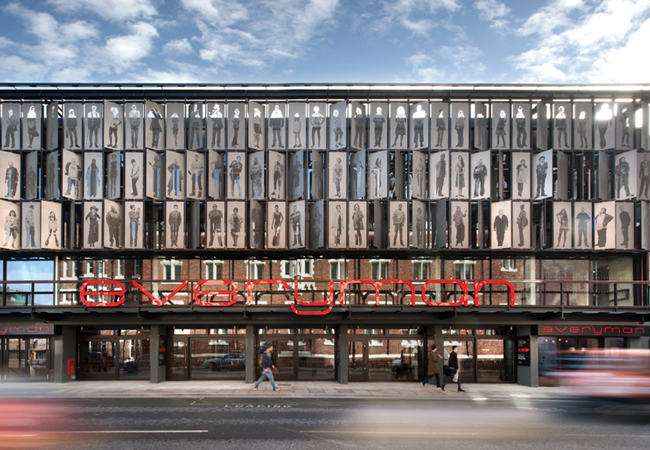 The judges’ citation for the winner of this year’s RIBA Stirling prize makes clear that Waterman Building Services’ low energy servicing strategy – as much as Haworth Tompkins’ striking architecture – was the reason for their decision to award the best building of the year prize to the Everyman Theatre, in Liverpool. They praised its ‘naturally ventilated auditoria’, applauded the use of concrete labyrinths to ‘supply and expel air’, and described the design as ‘exceptionally sustainable’.

The judges’ comments should come as no surprise to the design team; from the outset, sustainability was integral to the concept of the new building. The original Everyman Theatre opened in 1964, converted from the shell of a 19th-century chapel.

Over time, however, the fabric of this much-loved institution deteriorated badly, while the increasing needs of its users meant the space was no longer viable.

Originally, the plan was to build a larger theatre on a new site, but Haworth Tompkins argued successfully for maintaining an important sense of continuity by reusing the existing, compact, Hope Street site.

To accommodate the new building on an area of just 1,610m2, the shell of the existing structure was carefully dismantled to allow most of the chapel’s bricks to be salvaged for use in the theatre’s reincarnation. Haworth Tompkins designed the new Everyman Theatre to derive as much functionality from the building as possible, while incorporating the best-loved features of its predecessor – all within a similar volume.

The outcome is that the building’s public spaces – including the foyer and bars – have been arranged in a series of half-level floors, set around the perimeter, to create what the architect describes as ‘a continuous winding promenade, from street to auditorium’.

In addition to the main auditorium and the catering spaces, Haworth Tompkins has also managed to slot in numerous creative spaces, including a rehearsal room, workshops, an audio-visual studio, a writers’ room, and a community studio.

Externally, the most striking architectural features are the theatre’s main, west-facing elevation, and four, giant, cylindrical chimneys, perched on the roof. 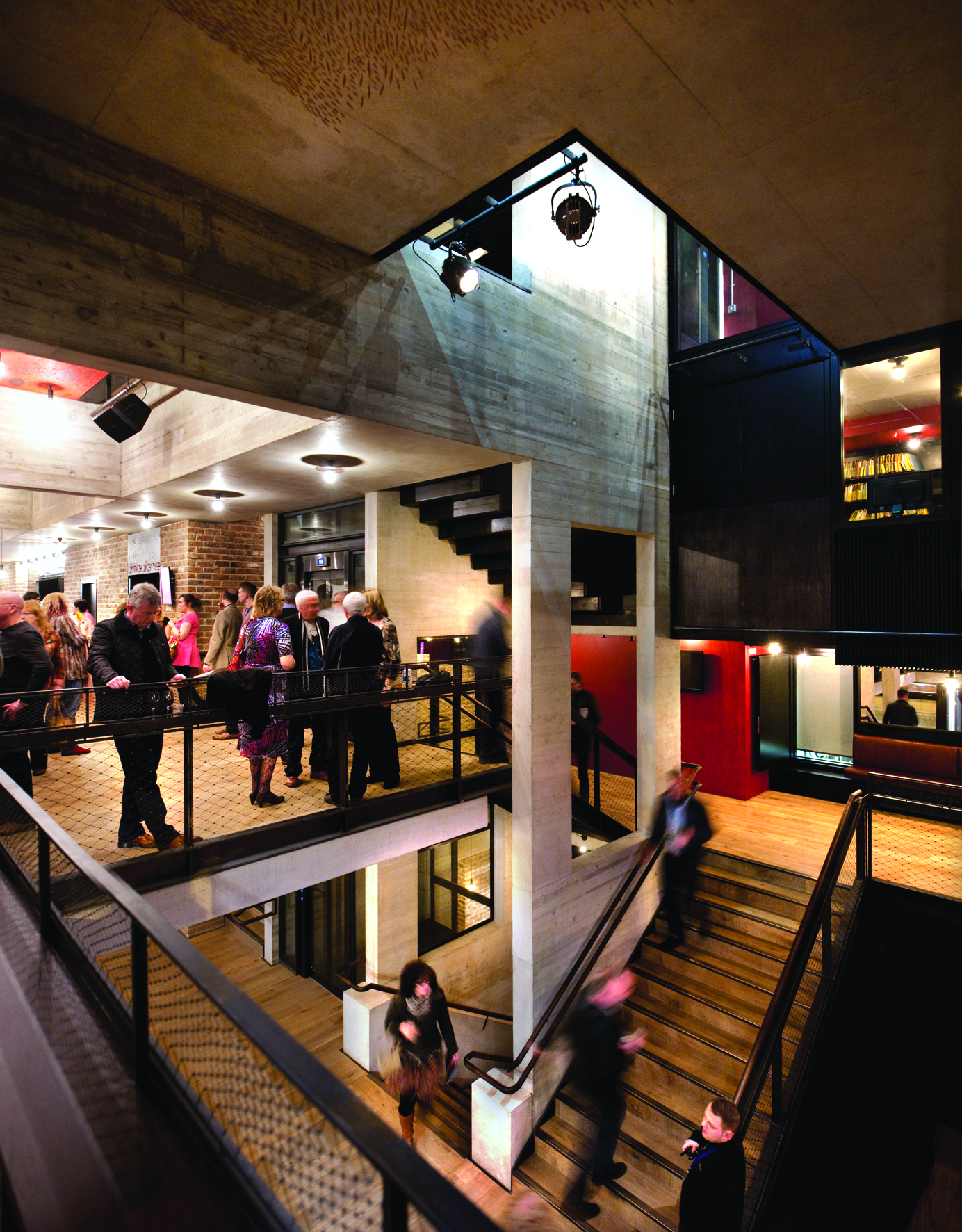 The attention-grabbing west façade is formed from 105 movable, aluminium sunshades. These are set in three rows, running the length of the elevation, and each one features a life-size portrait of a contemporary Liverpool resident, cut out of the metal sheet.

In contrast, the restrained red brick of the north, east and south elevations help the building sit comfortably with its listed neighbours. That same red brick is also used to form the four giant chimneys, which are a key component of the auditorium’s natural ventilation system.

The 400 seat auditorium is at the heart of the 4,690m2 building, literally and metaphorically. It has been designed to accommodate a ‘thrust’ stage (one that extends into the audience), which is encompassed on three sides by seating to recreate the intimacy of the old Everyman Theatre. This familiarity is enhanced by the use of reclaimed bricks from the original theatre, which are exposed in the new auditorium’s walls.

As well as giving the auditorium a worn, cosy ambience, the reclaimed bricks add thermal mass to the space, as part of the theatre’s ventilation strategy.

‘The client wanted a very, very sustainable, low energy theatre, so natural ventilation was seen as the obvious solution,’ says Jonathan Purcell, director of building services for Waterman’s, who was charged with developing the ventilation solution for the windowless, artificial environment of the theatre’s auditorium. ‘We had to find a way to ventilate what is essentially a black box.’ 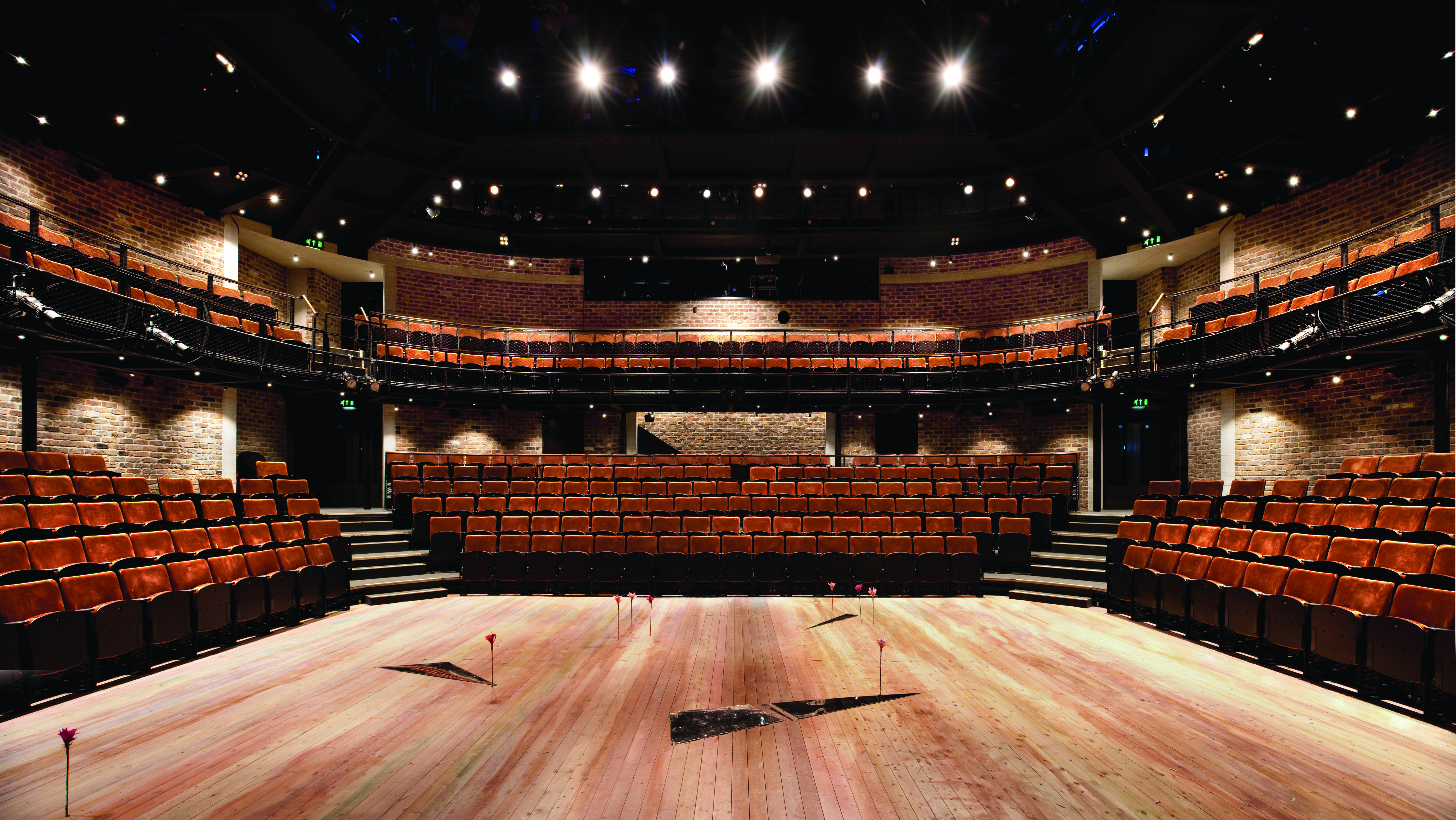 The design team’s aim with the auditorium ventilation strategy was, according to Purcell, ‘to provide a nice, clean, swept path for the air to enter the space at low level, then meet very little resistance as it is allowed to rise from low level to high level in the auditorium; and, finally, to provide a simple route out through the roof-top chimneys’.

As a result, fresh air enters the building through an inlet louvre on Arad Street, a quiet road at the rear of the building. It then passes through acoustic attenuators and into a giant, concrete-encased plenum, constructed beneath the workshop area behind the theatre’s stage.

‘We’ve got a massive cavern of concrete in contact with the ground, which we use to cool the supply air in summer before it enters the auditorium,’ Purcell explains. From here, the air passes beneath the stage, through secondary attenuators, and into a horseshoe-shaped plenum beneath the banked rows of seating lining the auditorium walls.

The fresh air finally enters the auditorium through a series of perforated grilles beneath the seating. Heat given off by the audience, and from the theatre lighting, increases the buoyancy of the air, causing it to rise upwards through the lighting gantries to an acoustically attenuated 2.5m-high exhaust air plenum. A giant duct, which doubles back on itself, then delivers the air from the plenum to the four louvred chimneys – nicknamed John, Paul, George and Ringo by the design team – where it is exhausted (see Figure 1, cross-section drawing). 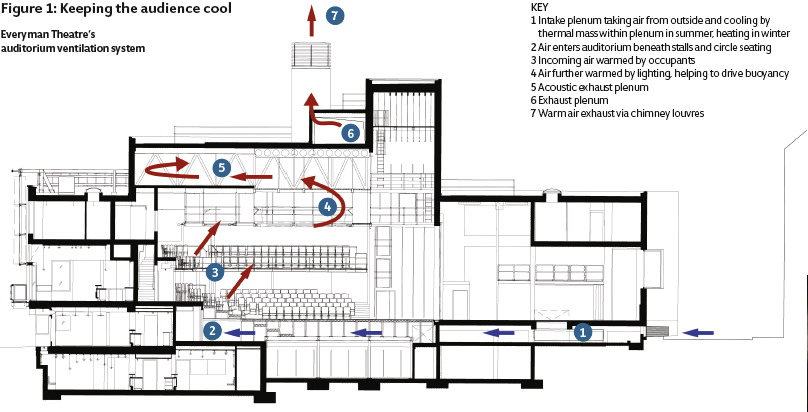 For the system to work effectively, Waterman’s had to generate enough buoyancy to drive a sufficient quantity of air through the auditorium to keep conditions comfortable for the audience.

The air inlet size and location was set – its dimensions defined by the street, basement and ground-floor slab levels. Building Regulations requirements for fresh air of 10 litres per second per person for a capacity audience of 450 people, plus 40 staff and actors, set the minimum quantity of supply air at 5m3/s.

As a result, the only variable open to Waterman’s in developing the auditorium ventilation solution was to adapt the height and diameter of the four chimneys, to produce a solution capable of maintaining excellent air quality and of dissipating heat gains from the space.

Lighting is the biggest heat source within the auditorium. The stage has 140kW of lighting installed, of which approximately 65kW will be on at any one time during a production. Occupants and other heat sources contribute another 50kW of heat.

‘We did a huge amount of modelling work to establish the size, open area, and height needed between the inlet and tops of the chimneys to drive the stack effect to pull air through the auditorium,’ explains Purcell.

Demolition waste: 90%+ recycled
Construction waste: 89% recycled
The site’s energy and water use, and the impact of transport to site, were monitored
An on-site biodiversity champion ensured no harm came to established flora and fauna

Fortunately for the design team, these early modelling studies showed that the fresh air requirement of 5m3/s would be sufficient to flush the 115kW heat gains from the auditorium.

Thermal dynamic simulation modelling was used during the design development to assess conditions inside the auditorium throughout the year. The cooling solution was modelled between the months of May and September to see where the temperature peaks were occurring. ‘Once we found this out, we used computational fluid dynamics (CFD) to model the space at these particular moments in time,’ Purcell says.

Thermal mass helps keep the auditorium cool in summer. ‘CFD modelling predicted that we’d get a temperature drop of between 2.5°C and 3.0°C as a result of the thermal mass,’ says Purcell. In addition to the concrete air-intake plenum, 25,000 bricks reclaimed from the old theatre line the auditorium and add significantly to the thermal mass of the space.

‘The only bit of the auditorium enclosure that is lightweight is the roof structure, but we were not too worried by that because – once the air has risen to high level – it is drawn out of the auditorium by the chimneys,’ says Purcell.

A night-time cooling strategy helps purge the inlet plenum and auditorium structures of heat in summer.

The auditorium modelling also highlighted the problem of insufficient air movement around the upper level gallery seating. ‘When we modelled the air flow, we found that it by-passed the galleries altogether,’ says Purcell.

Using detailed modelling demonstrated to Waterman’s that the natural ventilation strategy would be sufficient to keep conditions comfortable in the auditorium throughout the year.

The theatre’s trustees, however, were sceptical, and sought the reassurance of additional cooling measures as insurance against the failure of natural ventilation to keep the audience comfortable. As a consequence, two air handling units (AHUs) – complete with direct expansion cooling systems connected to air source heat pumps – are hidden away in the plenum beneath the stage. These have yet to be needed.

‘Last year was the warmest on record, and the theatre operated all year on full natural ventilation, without need to resort to cooling – even during a Saturday matinee,’ says Purcell.

An array of actuator-controlled dampers within the basement and high-level auditorium regulates the airflow through the auditorium. In winter, the fresh-air rate is kept to a minimum by carbon dioxide and temperature sensors.

‘When you have the heat load from the audience and from the theatre lighting, the space does not need heating,’ says Purcell.

The designers have, however, made clever use of the AHU to preheat the auditorium ahead of shows in winter – reversing the cooling heat pump enables the unit to provide heating without needing to run the boilers. A fully automated control system based on threshold temperatures regulates air flow.

Temperature control in the auditorium

Below 21°C, the AHU heating is on
Between 21°C and 24°C, the actuator behind the intake louvres gradually opens to increase the ventilation rate.
At temperatures above 24°C, the AHU fan will start to boost the ventilation rate
Should the temperature rise above 26°C, the auditorium will switch to mechanical cooling, closing the fresh air louvres and running the heat pump in cooling mode

In addition to the auditorium, the low energy servicing strategy means that the community room – which doubles as rehearsal space – and the main rehearsal room are also naturally ventilated.

The community room ventilation system is similar to that of the main auditorium, with a street-level air intake delivering air to the space through a series of floor grilles, with air exhausted through two, roof-top chimneys. Unlike the main auditorium, however, the room also includes trench heating to pre-heat incoming air during
the winter.

The main rehearsal room is ventilated using roof-mounted windcatchers to both supply and extract air from the space. The room’s ventilation is supplemented by opening terrace doors to the Arad Street façade, while radiant panels provide heat to the room. The foyers, too, are naturally ventilated via opening sliding windows in the front façade. The warmed air from these spaces rises up and out of the building through a large lightwell. The only principal space to be mechanically ventilated is the basement bistro.

Solar gains and glare to the foyer and bars are kept to a minimum by the 105 aluminium, life-size-portrait shutters. The shades, which rotate around a central pivot, are positioned by occupants opening a window, manually moving the shade, and then locking it into position. In practice, this means each screen is set at a different angle, at different times of the day, to create a dynamic façade.

‘The users have bought into this solution completely; on grey days, most of the shades are open, while on sunny days the façade is a wall of Liverpudlians,’ says Purcell.

These quirky sunshades and the building’s natural ventilation strategy have helped the new Everyman Theatre to achieve a BREEAM excellent rating. The building also includes: a gas-fired micro CHP engine, sized to meet the building’s hot-water demand for toilets, showers and catering; a daylight-linked LED lighting scheme to all public spaces; and rainwater-harvesting for toilet flushing. No wonder the Stirling Prize judges described the building as ‘exceptionally sustainable’.