Two Kingdom Street is a 12-storey, 25,102 m2 commercial office building in Paddington, west London, that has a Breeam Excellent design rating. It was completed in 2010 and acquired by British Land in 2013. It is currently let to various tenants.

As a relatively recently completed building with a respectable Breeam rating, one might assume that it was relatively energy efficient, and that any initiative to further improve its energy performance would not be cost effective. This was not the case.

Cavendish Engineers has successfully developed and implemented a demand-driven control strategy for the building that has delivered a 15% saving in gas consumption and a 10% reduction in electricity consumption, with a payback of just 2.5 years.

‘There was a misconception that the energy consumption of a building that was only six years old at the time couldn’t be improved cost effectively,’ says Phil Draper, managing director of Twenty One Engineering.

Cavendish Engineers’ achievement was recognised at the CIBSE Building Performance Awards, where the scheme won the Energy Management Initiative category. Judges said: ‘Cavendish Engineers is challenging the notion that modern buildings are always efficient’ and said that the entry ‘demonstrated both the importance and potential benefits of active, ongoing building management’.

‘The project came about because it was apparent to Broadgate Estates that the building’s HVAC operation was based on a time schedule and external conditions, and not on the actual demands of the office spaces,’ Draper explains. ‘This had manifested itself with a lack of heating to some office floors, which meant that they were cold in winter.’

The starting point for Cavendish Engineers was to understand where and how energy was being used by the landlord in generating chilled water (CHW) and low temperature hot water (LTHW), and in providing ventilation.

The engineer undertook thermal modelling, and reviewed and monitored the hydraulic and ventilation systems as well as the building management system (BMS) infrastructure and control strategy. ‘They went back to basics; they checked the hydraulics and analysed all the circuits. The work they did was in far more depth than had been done before, probably since the original design,’ says Draper.

The data gleaned enabled identification of several energy reduction opportunities that could be realised through the modernisation of three core systems, addressing: the control system architecture; air handling unit control optimisation; and CHW and LTHW system optimisation. ‘Cavendish set out to optimise the performance of systems that were already installed by introducing a demand-driven control strategy,’ says Draper.

A key issue uncovered by the investigation was with the building’s Tridium BMS. This was found to be at its input limit, which was creating control issues on site. To avoid exacerbating this, Cavendish Engineers integrated a new C-Tech high-level control system into the existing system network and interfaced this with the Tridium BMS.

This system gave the engineers the ability to monitor and control key operational assets remotely using internet protocol (IP) environment devices without being locked into using a specific BMS format or manufacturer. ‘The system imports data from the incumbent BMS and field sensors, performs the demand-driven strategy (DDS) calculations, and controls the HVAC assets under its remit – such as adjusting the speed of the AHU motor to meet the demand for fresh air against CO<sub>2</sub> levels,’ explains Draper.

To optimise the air handling unit (AHU) systems, 28 sensors were strategically located throughout the tenancies to measure CO2, temperature and humidity. To achieve the DDS, the system continually processes input data, which it uses to control the amount of fresh air provided by the AHUs to ensure CO2 levels never exceed the 800ppm defined by the Well Standard. The AHU supply and extract fans slow down when CO2 levels drop below 800ppm. This simple solution has resulted in a 35% reduction in AHU energy consumption.

Comfort conditions are maintained on tenant floors using a four-pipe fan coil unit (FCU) system. ‘The building is so well insulated that even in winter when fully occupied it will need cooling every day of the year,’ says Draper. The DDS ensures that the FCU’s CHW and LTHW demands are met efficiently by ensuring large temperature differentials through the hydraulic systems by controlling the pump speeds. ‘The objective of the DDS was to achieve the best possible indoor air quality at an optimised minimum HVAC energy input,’ explains Draper.

The DDS constantly monitors and varies system temperatures. It ensures that in the height of summer, maximum cooling will be delivered to meet demand, but in September when conditions are not as warm, the CHW supply temperature will be allowed to rise. ‘These are not seasonal adjustments – the temperatures will change throughout the day,’ explains Draper. Similarly, the boilers are designed for an outdoor temperature of -4°C, but Draper says you will not need the full output of the boilers, especially if you’ve got heat recovery. ‘You might only need to raise the temp by 5°C, you don’t need a flow temperature of 80oC on a 300kW heating coil; you’ll probably only need 45°C.’

The system constantly reviews and adjusts the plant outputs to ensure the system delivers the design intent. ‘With the right inputs it will deliver the right outputs; it looks at the demand and adjusts the outputs accordingly to get the best efficiency out of the plant,’ Draper says.

A key part of validating the DDS involved using the building’s existing submetering, which was connected to EP&T’s Edge system energy monitoring software. Using this system, Cavendish Engineers was able to benchmark the performance of each piped system prior to commencing the works, and again after the works had been completed, in order to validate the modifications.

To commission the ventilation systems, CO2 readings were taken manually on floors to ensure local sensors were accurate. The exercise ensured that the remote sensors were placed in the areas with highest occupancy density.

The real validation of the success of the scheme, however, was from tenants. ‘There was zero feedback,’ says Draper. He says this was a positive sign because it shows that comfort conditions have been unaffected by the upgrading of the building’s control system.

In addition to the energy efficiencies achieved, the control platform that governs the DDS uses open protocol devices, as well as the Cloud, to provide a robust and customisable system, but one that will allow open communication with new technologies in the feature.

This will enable a condition-based maintenance approach because it will provide early awareness of system inefficiencies or plant failure. ‘This will drive maintenance away from the established planned preventative maintenance format to a truly demand-driven one, where assets are tended as and when they deteriorate, potentially saving money and man hours every year,’ says Draper.

The project was delivered at a cost of £63,630. A 24-month soft landings process is enabling the efficacy of the design to be monitored and improved. It also provides support for the site team. ‘We are working with the managing agent to see how we can amend CO2 controls to get further improvements,’ Draper says.

Based on 12 months of energy data up to July 2018, and a net lettable area of 25,102m2, the building has an electricity intensity of 88kWh.m-2 and a gas intensity of 52kWh.m-2. Benchmarked against a modified Energy Consumption Guide 19 (ECON 19) with tenant consumption removed, a good practice Category 4 building is rated at 235kWh.m-2 for electricity and 114kWh.m-2 for gas. ‘Tenant energy use is excluded from the benchmarking process due to the inability of the landlord to control how efficiently their energy is utilised,’ Draper explains. 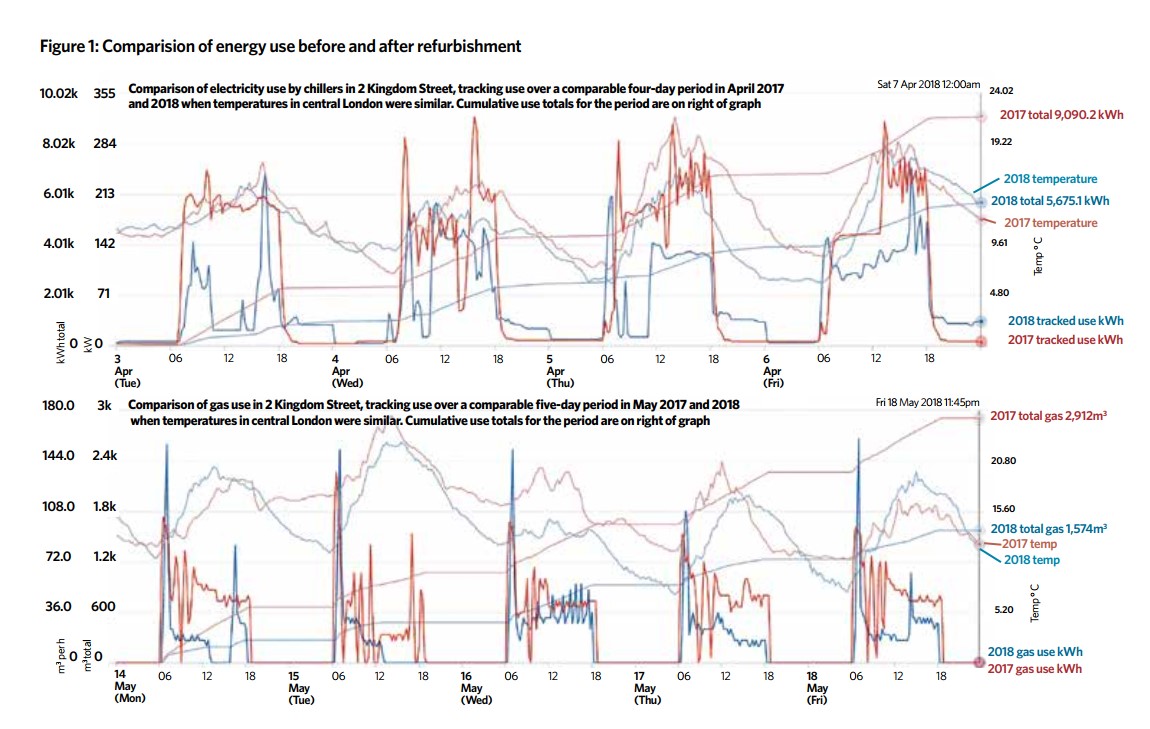